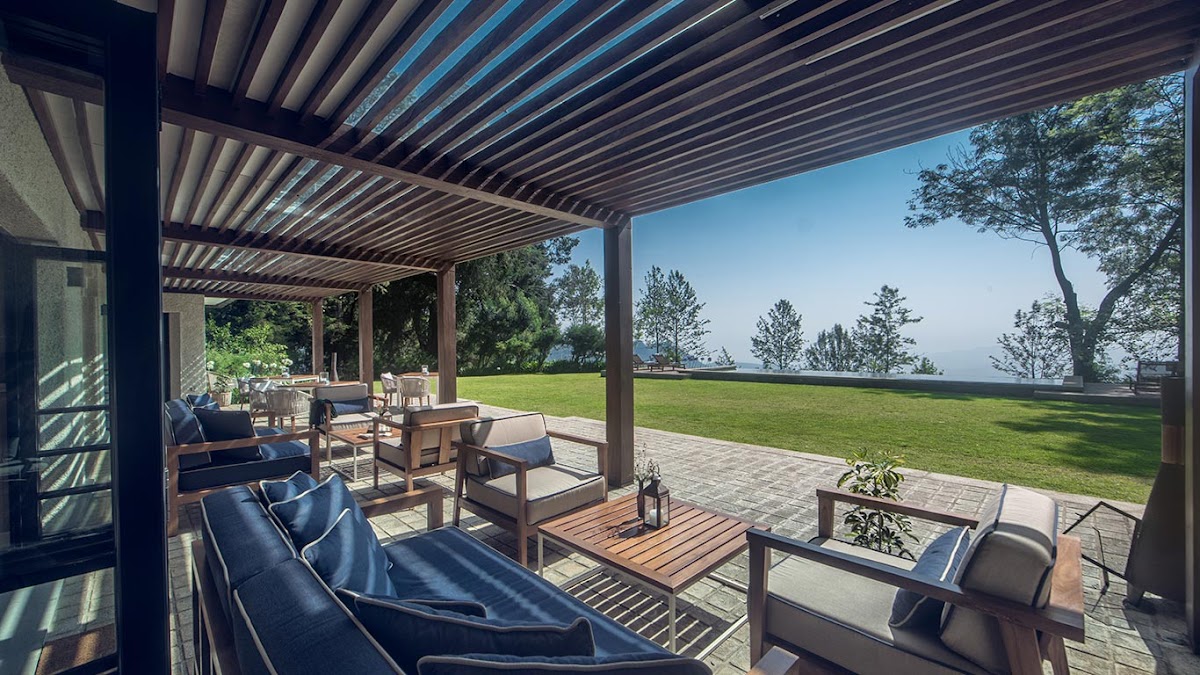 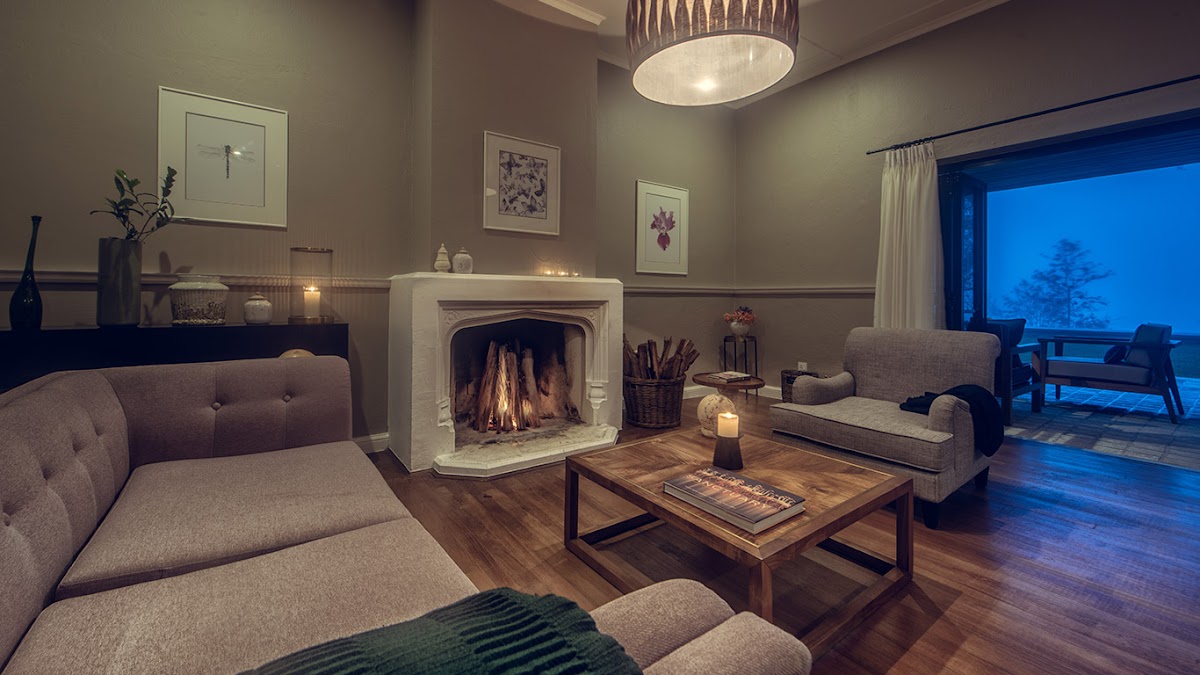 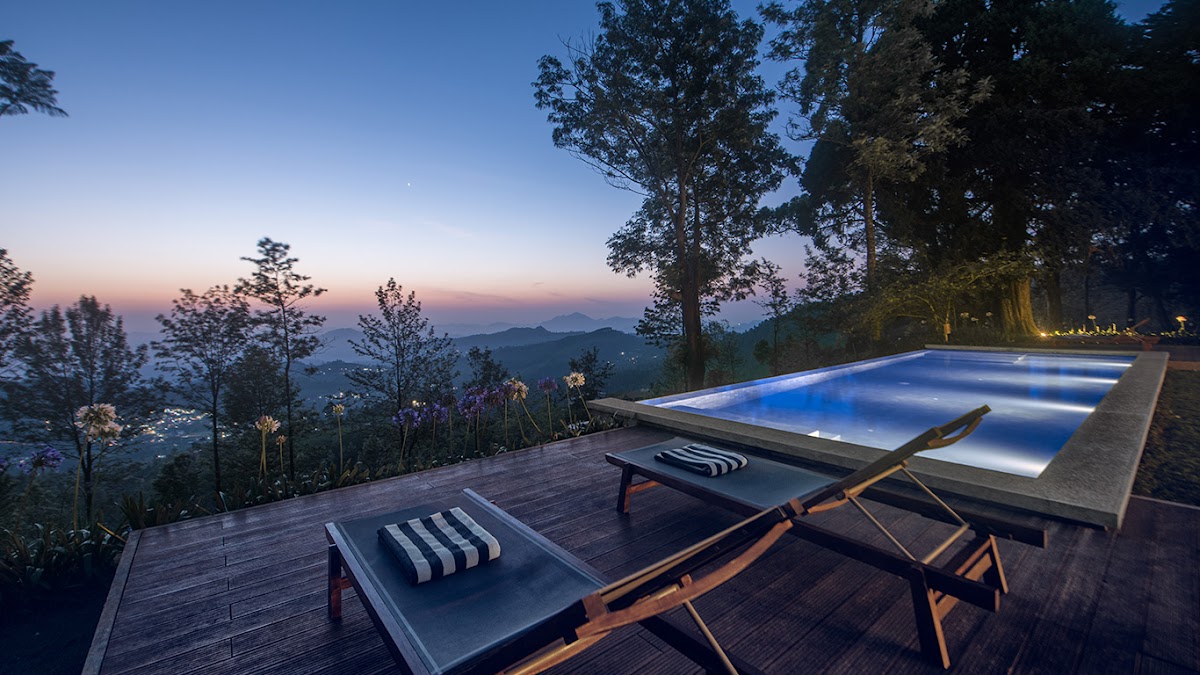 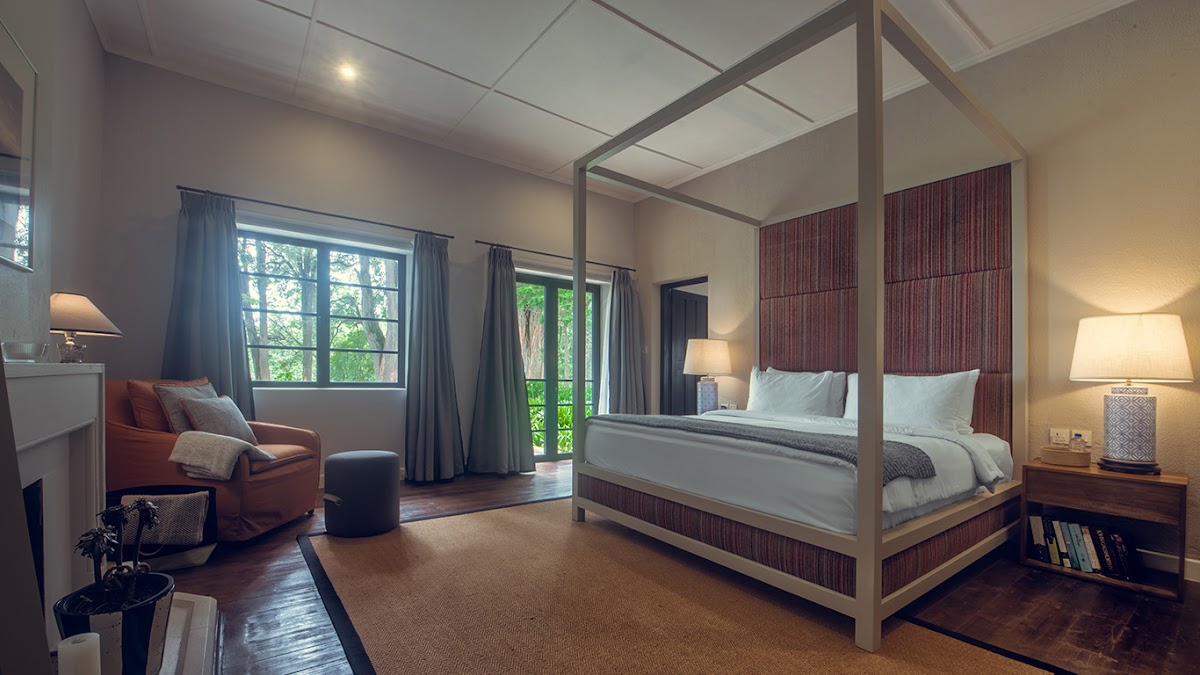 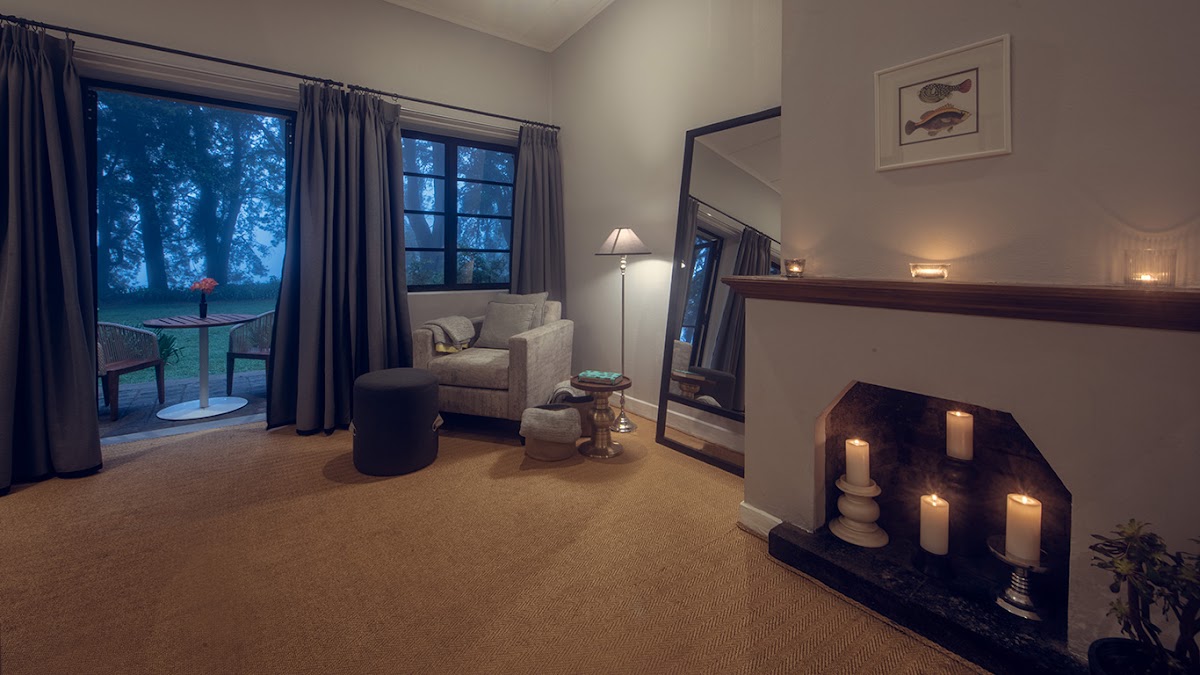 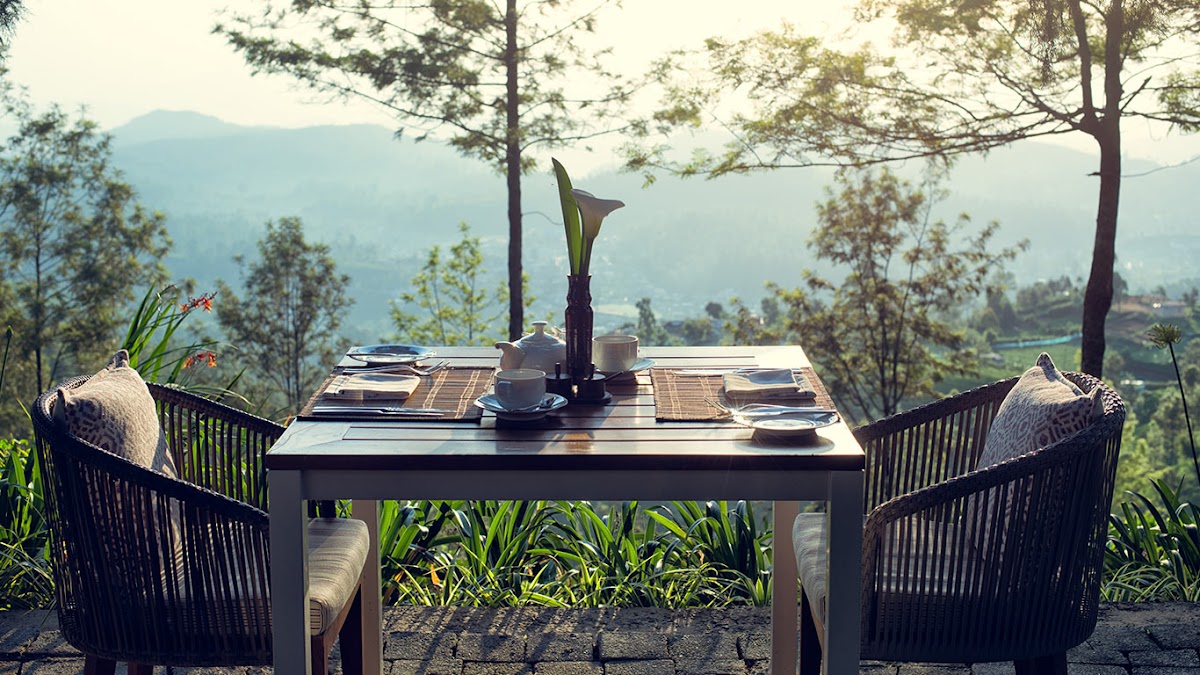 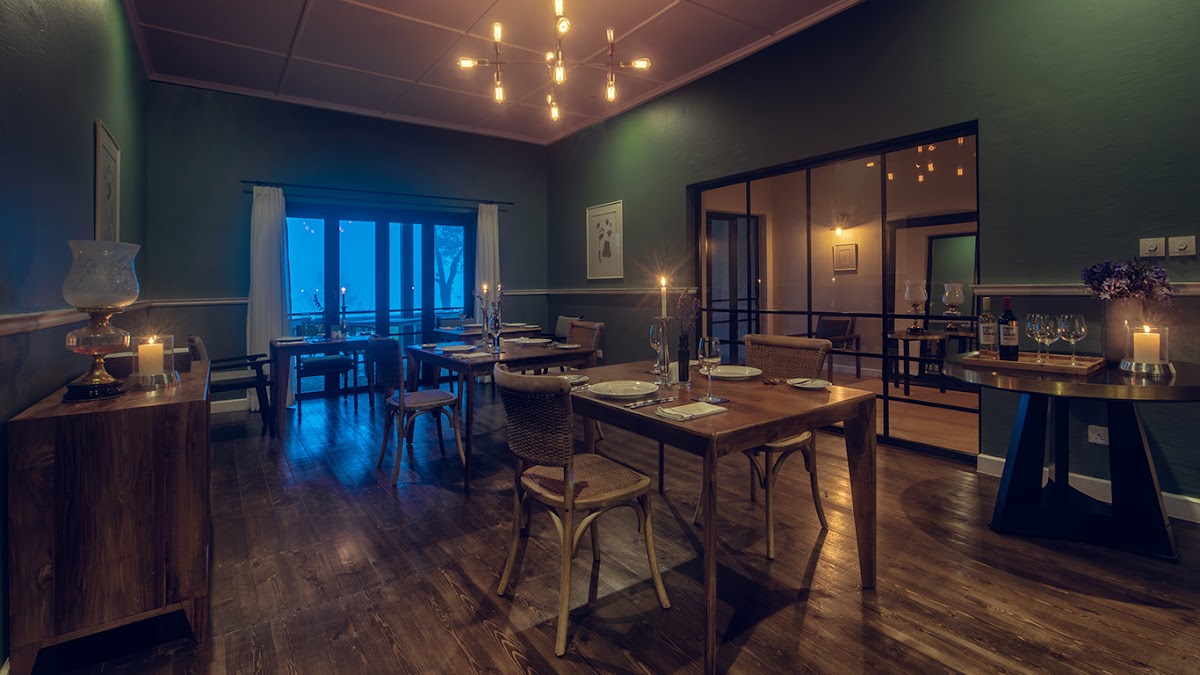 Perched amongst tea bushes amidst the Concordia Estate, high up on a hill near Nuwara Eliya, Goatfell is a luxurious, recently renovated four-bedroom tea bungalow hotel. This former estate manager’s bungalow still resonates with the warmth and up country charm of a bygone era. With gourmet food and butler service, guests can relax on covered verandas in the warmth of the log fired sitting room or enjoy views of the tea fields from the infinity swimming pool. The surrounding hills, marked by concentric circles of neatly trimmed tea bushes, are linked by winding, ascending estate roads promising jaw-dropping vistas at every turn. The bungalow sits at an elevation of 2,000-metres above sea level and from here guests can exhale, sit back and marvel at the beauty of the Sri Lankan hill country.

Goatfell is located on the outskirts of Kandapola and a 25-minute drive from the colonial-era hill station of Nuwara Eliya. It is a two and half hour drive from Kandy town. The surrounding hills, marked by concentric circles of neatly trimmed tea bushes, are linked by winding, ascending estate roads promising panoramic views at every turn. Located amidst the Concordia Estate, and within strolling distance to Finlay’s Tea Factory, our bungalow hotel in Kandapola’s elevated surroundings basks in glorious hill country views. The enveloping tea hills, waterfalls and heart-stopping panoramas are a walkers’ paradise.

“Nuwara Eliya is a market town carved out of a bowl-shaped valley beneath the dramatic Pidurutalagala Mountain, Sri Lanka’s loftiest peak. Often referred to as Little England, the town dates back to the mid-19th century and is where British tea planters would converge to socialise, relax and indulge in cooler-climate country pursuits such as deer hunting, golf, polo and cricket. Many of Nuwara Eliya’s buildings, such as the Post Office, stay true to their colonial heritage while the Nuwara Eliya Race Course still hosts meetings a few times a year. Sights in Nuwara Eliya’s outskirts include Hakgala Botanical Gardens and the Sita Ella Hindu Kovil. Although Nuwara Eliya is a prime tea-producing region, this is also Sri Lanka’s garden city. Surrounding the town, on terraces and in small home gardens, are neatly arranged vegetable plots sprouting leeks, carrots, beans and cabbages for consumption across the island. This is also the island’s prime milk producing region. Ambewela’s vivid green mist-cloaked pastures are sprinkled with grazing Friesian herds.”

Goatfell and its surrounding tea estate is inherently historical. Converted from an estate manager’s bungalow, the residence still resonates with the culture and charm of the bygone era. With original ornate fireplaces and elegantly tall ceilings, the traditional features of the bungalow allow guests to travel back in time as they get lost in the serenity. Walk out into the surrounding tea fields, pea-green and fragrant, and really get to know Sri Lanka’s past.

All three Concordia Double Bedrooms are contemporary in arrangement, but are flooded with historical charm. With a careful mix of antique and modern furnishings, including a luxurious four-poster bed, you can relax in true comfort on your own private veranda or soak in the bathtub after a day exploring the tea trails. Kandapola is a large, private bedroom to the front of the bungalow and opens directly onto the lawn and infinity swimming pool through a set of French windows. Ragala, located to the right of the bungalow, is generous and indulgent, with views of the bungalows beautifully manicured gardens and surrounding tea estate. Tucked off the central hallway, Summerhill bears similarities to the Ragala Bedroom yet has the option of being connected with its neighbouring twin bedroom, Park, to make a family suite. All rooms come with an array of modern amenities.

The Concordia Twin Bedroom Park is cosy and chic, tucked off the central hallway. Laden with period charm, with bedroom is funished with four-poster twin single beds, with luxurious duvets, an armchair, desk and walk-in wardrobe, as well as a table and chairs on a private veranda. This room can be connected to the Summerhill Bedroom to create a family suite.

The kitchen at Goatfell promises locally sourced, freshly cooked food, served to you in an upcountry tea bungalow atmosphere. Feel right at home with your favourite drink in hand, freshly shaken or poured by your very own butler. Splendid afternoon tea is served in the garden and gourmet meals in the cosy indoor dining room or outside on the veranda. Expect to tuck into a hearty breakfast followed by a ‘Planter’s Lunch’ – a selection of daily curries – before moving onto afternoon tea and later, an à la carte dinner. With all that and snacks and drinks, including your favourite tipples beside the warm crackling fireplace, you’ll be spoilt for choice!

The cool, fresh mountain climate of Kandapola makes it a superb destination for exploring the outdoors. The bungalow’s own tea estate provides a good introduction, and you can stroll along hedge-lined estate roads flanked by waist-high tea bushes, either on your own or with one of Goatfell’s butlers as a guide. Finlay’s Tea Factory, an authentic working tea factory, is within walking distance and you can learn all about tea cultivation and production in a manager-guided factory tour.

If you fancy going further afield, make use of one of Goatfell’s complementary bicycles or your own two feet and go exploring! There is so much too see all around the hotel, away from the beautifully manicured Goatfell gardens is the wild hill country, where abundant flora and fauna thrive.

Just 30 minutes away is the Nuwara Eliya Gold Course where you can partake in your favourite past time, or learn from scratch, with the stunning scenery all around you. With rich tradition, history and ambience, its no doubt it is one of the oldest golf clubs in Sri Lanka. With kids activities too and a coffee shop, everyone can enjoy a trip to the beautiful club.

Goatfell and all Teardrop Hotels have founded the charitable foundation CARE (Creating A Rewarding Experience) to give back to the local communities they work in. Over the last year alone they have donated more than a quarter of a million rupees to charitable causes in the local community. These range from providing food, medicine, reading glasses and stationary to low-income families, as well as helping to more widely equip local schools so that they may provide a higher level of education for the communities’ children.

The owners of Goatfell have worked hard to make sure that the tourism industry in Sri Lanka can prosper well, under the Sri Lankan Tourism Alliance. After the tragedy of the Easter Sunday attacks, Sri Lankans and world travellers alike came together to promote Sri Lanka as a destination. With one in ten families reliant on tourism for income, this solidarity is vital in the efforts to maintain the health of the industry. Goatfell and its sister properties are all members of the Sri Lanka Tourism Alliance, to promote successful and sustainable Sri Lankan tourism.

The team at Goatfell is acutely aware of the damage that single-use plastics are having on the environment. That is why they have made every effort to remove them from everyday use. Being in the middle of such beautiful countryside highlights the need for care and consideration when it comes to the materials we use, which is exactly how the team at Goatfell conduct themselves.

Families are very welcome at Goatfell, extra cots are available on request, and families are welcome to stay in the property’s two adjoining rooms 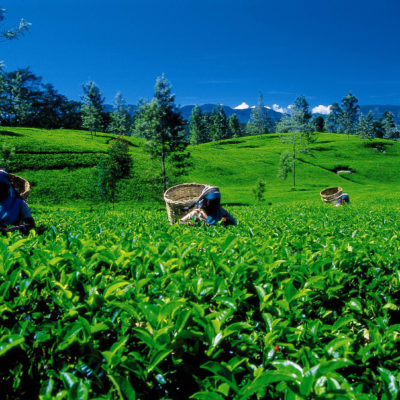