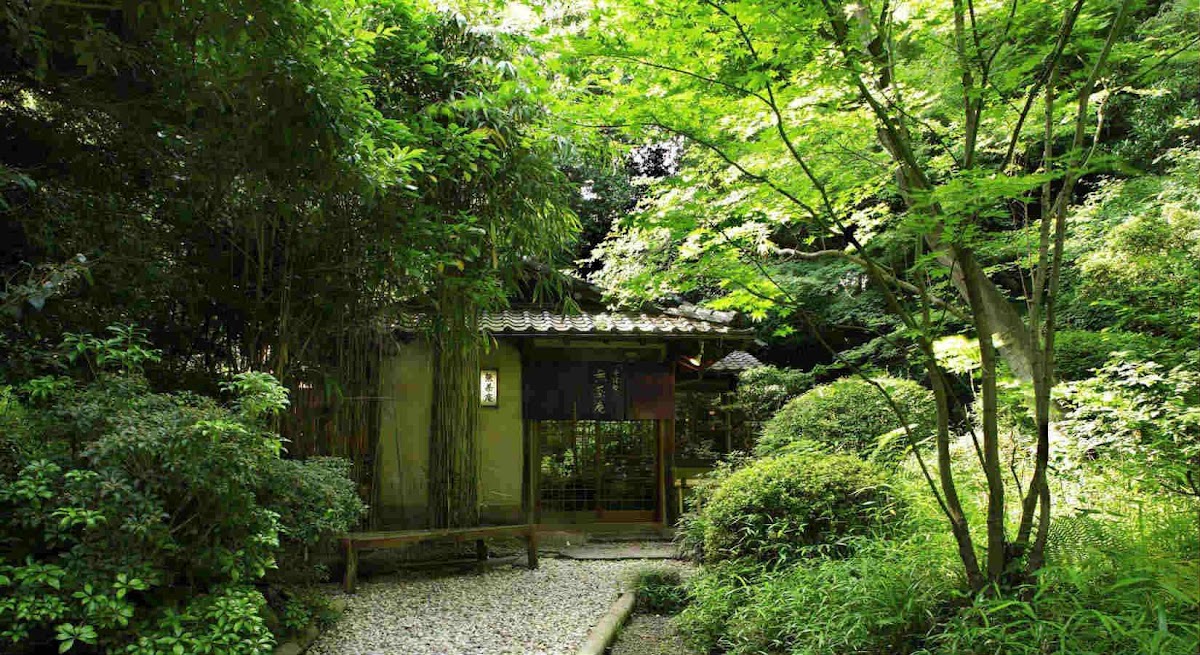 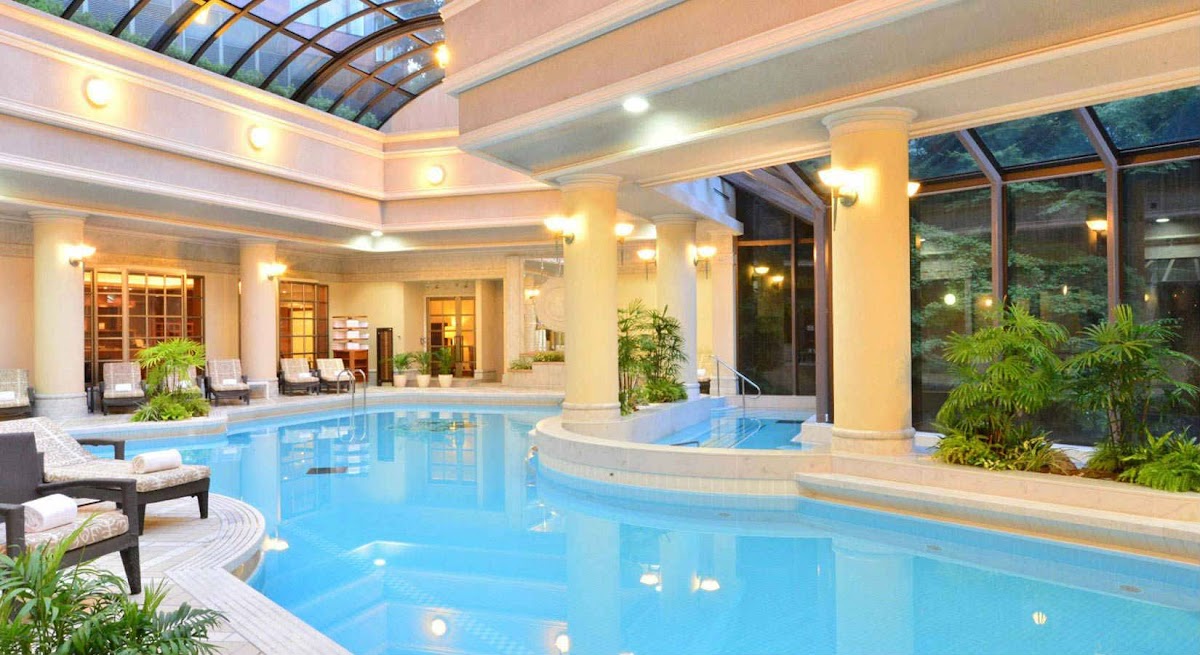 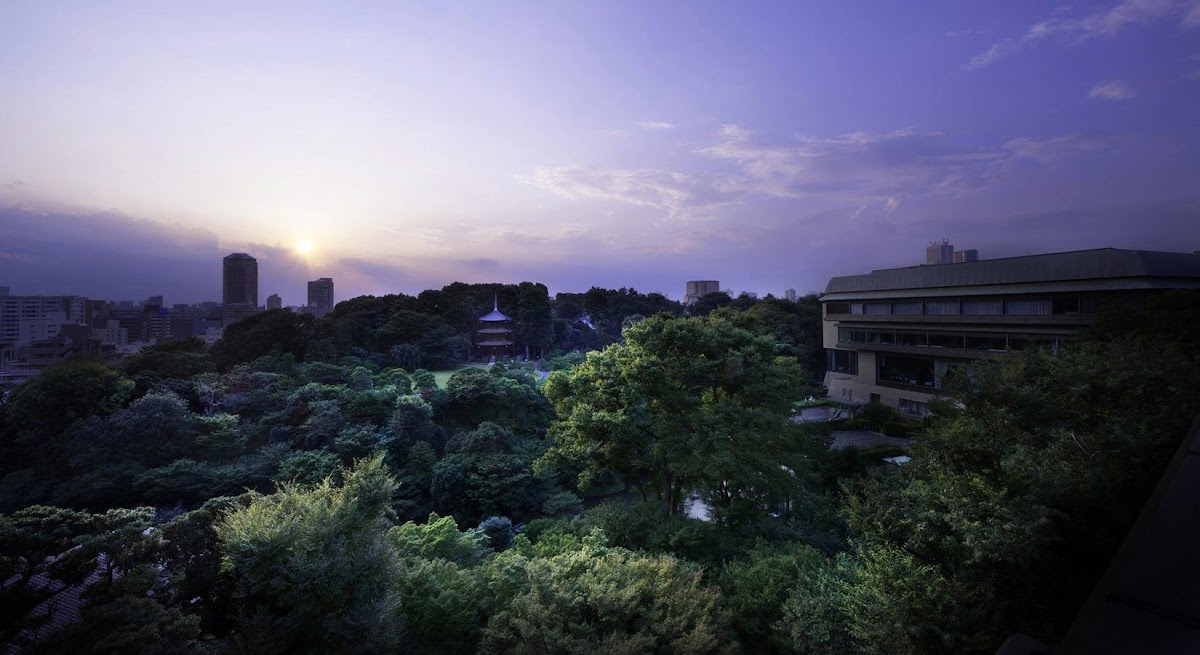 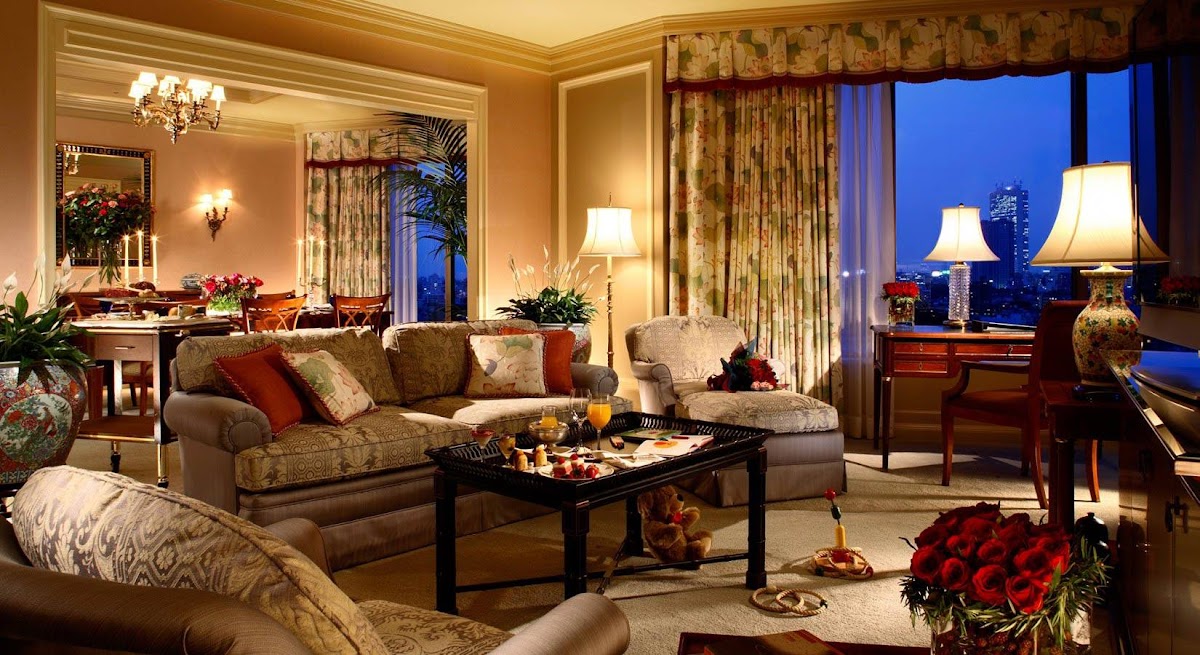 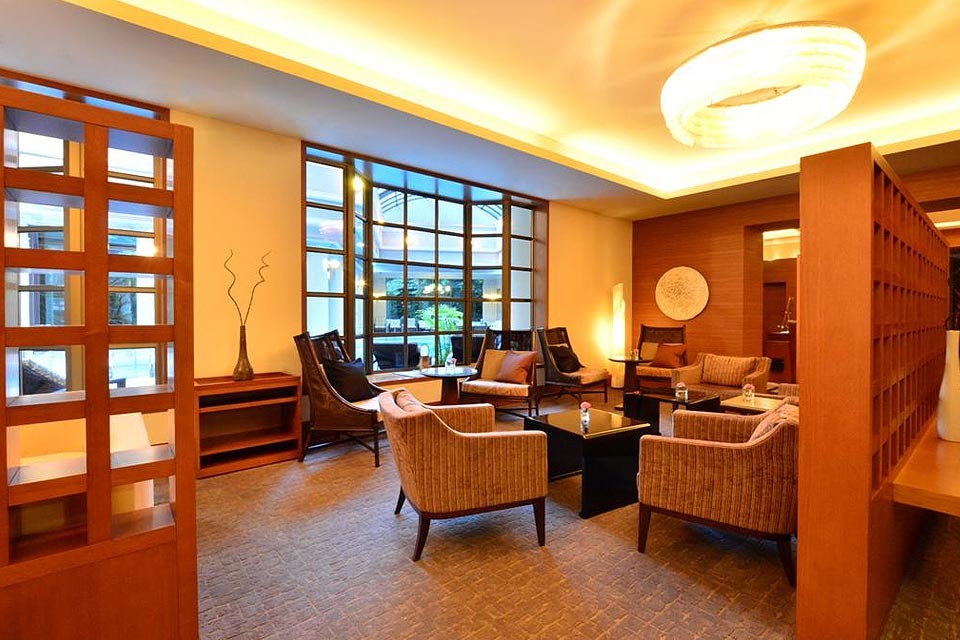 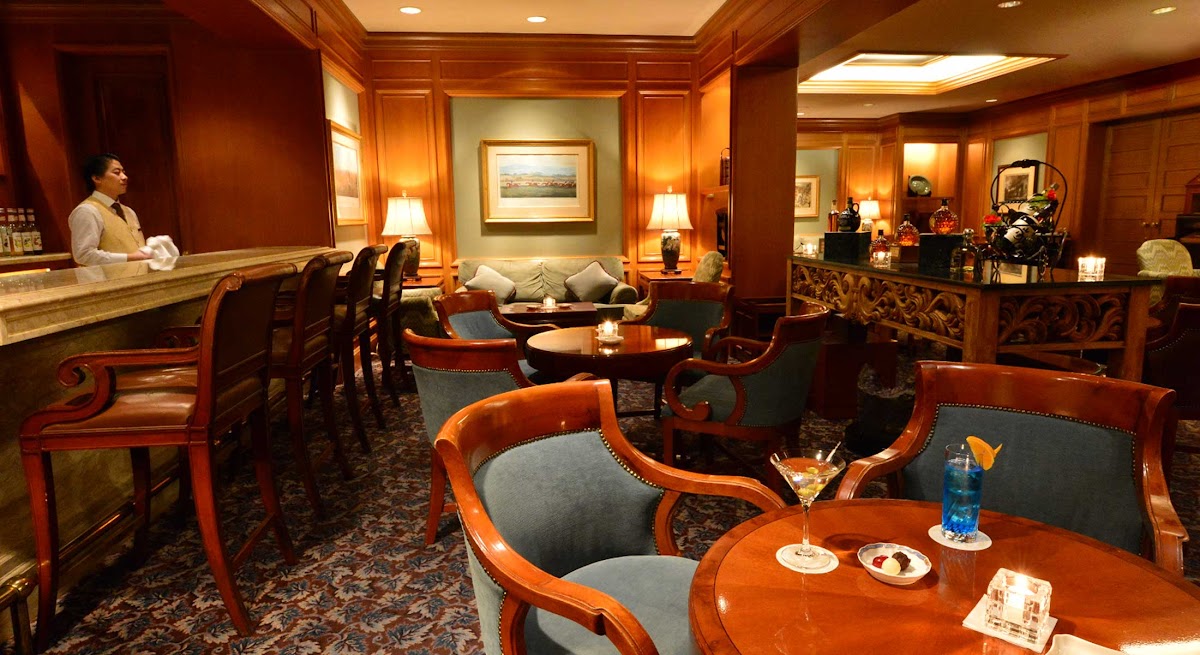 Hotel Chinzanso Tokyo brings the world famous Japanese hospitality to all its guests through its world class service and facilities. Chinzanso comprises of the mansion and the bespoke created natural garden commissioned by Prime Minister Yamagata Aritomo in 1878. Guests can indulge in a range of cuisines and experience different accommodation choices to find peace and tranquility in the heart of the city.

Lying on the outskirts of a range of magnificent gardens, the Hotel Chinzanso Tokyo has a privileged location. Located in Bunkyo City, Tokyo, there are a number of sights that can be easily accessed from the hotel, including the Dome City Attractions Amusement Park and the stunning Koishikawa Botanical Gardens. Visit the Hotel Chinzanso Tokyo in the spring (March to April) to see the Japanese Cherry Blossoms paint the hotel gardens in a range of light pinks.

The site of Hotel Chinzanso Tokyo is steeped in history dating back over 700 years. The earliest recollections of the hotel date back to the 14th century and the Edo Era (1603-1867), where the site was known as Tsubakiyama (Camellia Mountain) and it featured in the infamous ‘One Hundred Famous Views of Edo’ where the stunning scenery of the local water and Camellia flowers were depicted by Utagawa Hiroshige. In the Meiji Era (1868 to 1912) the former Japanese Prime Minister, Yamagata Aritomo, built a mansion within the expansive gardens and named it ‘Chinzanso’. Aritomo ensured that the gardens reflected his elegant taste, and they were appraised by many leading cultural figures for the beauty of the environment. During the Second World War, important sectors of the ‘Chinzanso’ were destroyed by the air raids that struck Tokyo, eradicating some of the fascinating features of the gardens and building. The Showa Era (1926-1989) was a time of transformation for the Chinzanso, as over 10,000 treses were planted in order to recreate the previous gardens and act as “a green oasis in war-torn Tokyo”. The Heisei Era (1989-2019) brought the Four Seasons Hotel Chinzanso Tokyo to the site, followed by the reconstruction of the symbolic Pagoda. Then in 2013, the original ‘Chinzanso’ and the Four Seasons Hotel Chinzanso merged to become the ‘Hotel Chinzanso Tokyo’. In the early years of the Reiwa Era (2019-), the key focus of the Hotel Chinzanso Tokyo has been to protect the rich history behind the hotel, promote learning surrounding Japanese traditions and providing excellent customer service. The authentic history surrounding the Hotel Chinzanso Tokyo is sure to fascinate guests, and allows visitors to understand the significance of Japanese culture both in the hotel building and the stunning surroundings.

With seven different room types and twelve different suite options, Hotel Chinzanso Tokyo has a wide array of accommodations for guests to reside in. With refreshing amenities and luxury bedding provided in every room, guests can relax in style. All have a spacious private bathroom, and views range from the beautiful gardens to the wonderful cityscape of Tokyo.

Located in a traditional Sukiyaki-style building in the hotel gardens and overlooking the Unkinchi pond, the Ryotei Kinsui Restaurant is perfect for those searching for an authentic Japanese dining experience.

Serving cuisine grilled on lava stones from Mount Fiji, the Mokushundo restaurant provides guests with unique dishes cooked in a inspiring new way. With views of the beautiful hotel gardens, you can lunch and dine on excellent seafood or Japanese Wagyu beef along with many other luxury dishes.

With relaxing views over the hotel gardens, guests can enjoy a blend of traditional and modern Japanese cuisines. For a truly authentic experience, sit around the teppanyaki counter and watch the chef’s culinary skills right in front of your eyes.

Nestled in the secluded hotel gardens, the Mucha-an Restaurant offers a relaxed atmosphere where guests can enjoy traditional Japanese Soba Noodles. With only the freshest and most local ingredients used in the restaurant, guests can be rest assured that they are being served authentic Japanese cuisine.

Overlooking the forested hotel gardens, guests can elect for Italian cuisine in the Il Teatro Restaurant. Guests can enjoy a range of Italian dishes that include the highest quality of ingredients. The Italian influence isn’t just reflected in the decoration of the restaurant, but in all three meals of the day.

For those searching to enjoy a relaxed meal, The Bistro Restaurant is ideal. With a range of vibrant dishes on offer, there is a new dish for everyone to try. Open from lunch until late at night, The Bistro is ideal for those guests that want to dine at unconventional times.

Guests who are looking for the elegance and grandeur of an Afternoon Tea need look no further than Le Jardin Lounge. With casual cocktails served throughout the evening, and afternoon tea served in the daytime, guests can experience a lovely bit of luxury in Le Jardin Lounge. Overlooking some of Tokyo’s most beautiful gardens, visitors can enjoy a little bit of luxury whilst dining in this lounge.

This stunningly decorated bar is ‘reminiscent of a fine European home’, with grandeur and mahogany adorning the room. With a friendly and specialist bartender, your drinks are sure to be made with the best quality ingredients. With over a hundred cocktails to choose from, you’re spoilt for choice at Le Marquis Bar.

Guests staying at Hotel Chinzanso Tokyo can have a Kimono fitting and led the Kimono for a day of hotel activities. After being expertly fitted into your Kimono, you will then enjoy a tour of the hotel’s garden and be photographed in a scenic location ready to collect on check-out. The Kimono can also be worn outside of the hotel for dining or light entertainment. The Kimono’s must then be returned to your room the following morning ready to be collected by hotel staff.

Be a Samurai Workshop

Exclusively for hotel guests, the Samurai Workshop is ideal for those seeking a completely unique experience. Included in the experience, guests can dress as Samurai’s and learn the ancient sword techniques that real Samurai’s use. With a photo shoot also included, you’ll have memories that will last a lifetime.

Other Activities and Experiences

Hotel Chinzanso Tokyo offers a wide range of activities that are exclusive for staying guests. Such activities include; a traditional Japanese tea ceremony, a Japanese language lesson, a garden tour and a rice cracker grilling experience. All activities and experiences can be booked by the friendly staff at the main hotel desk.