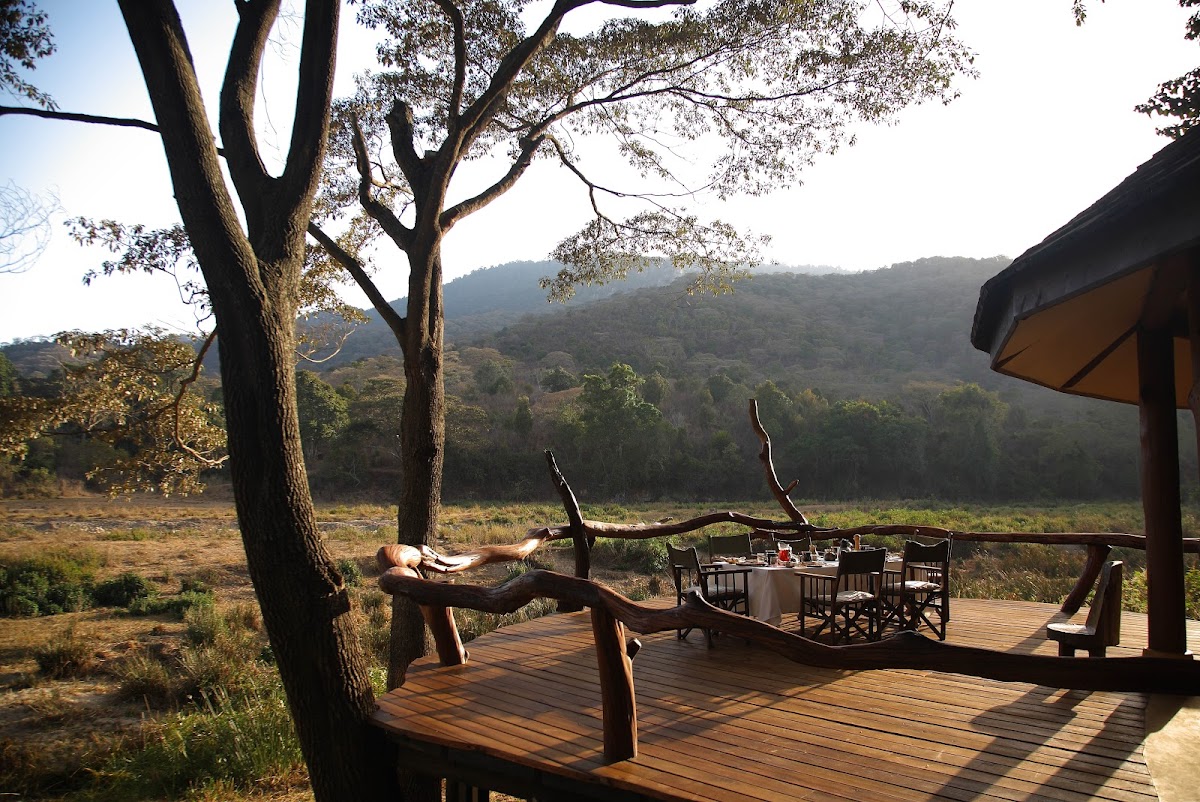 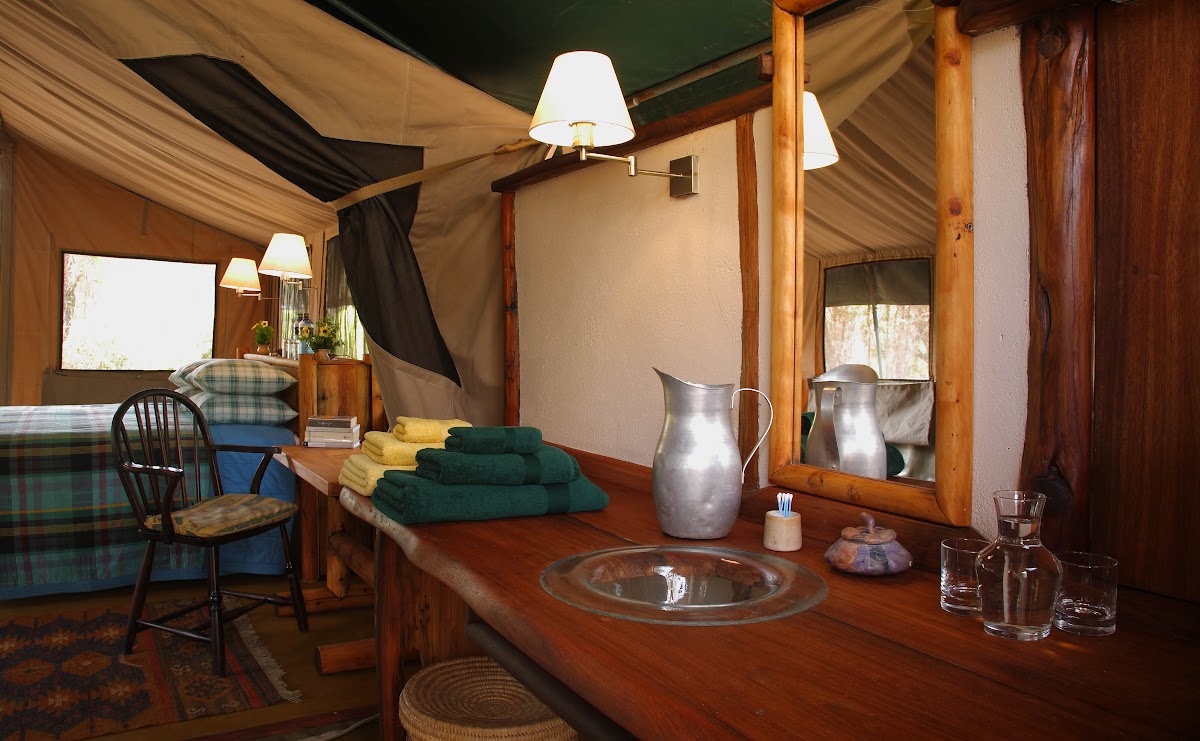 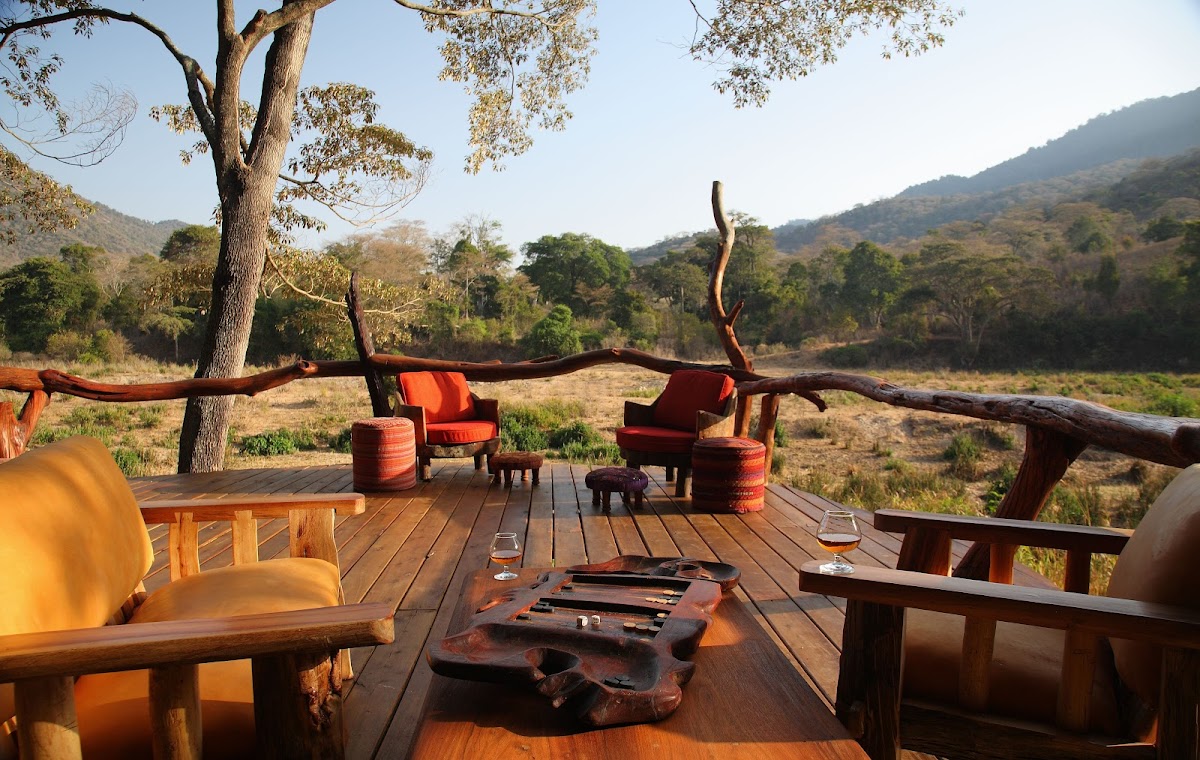 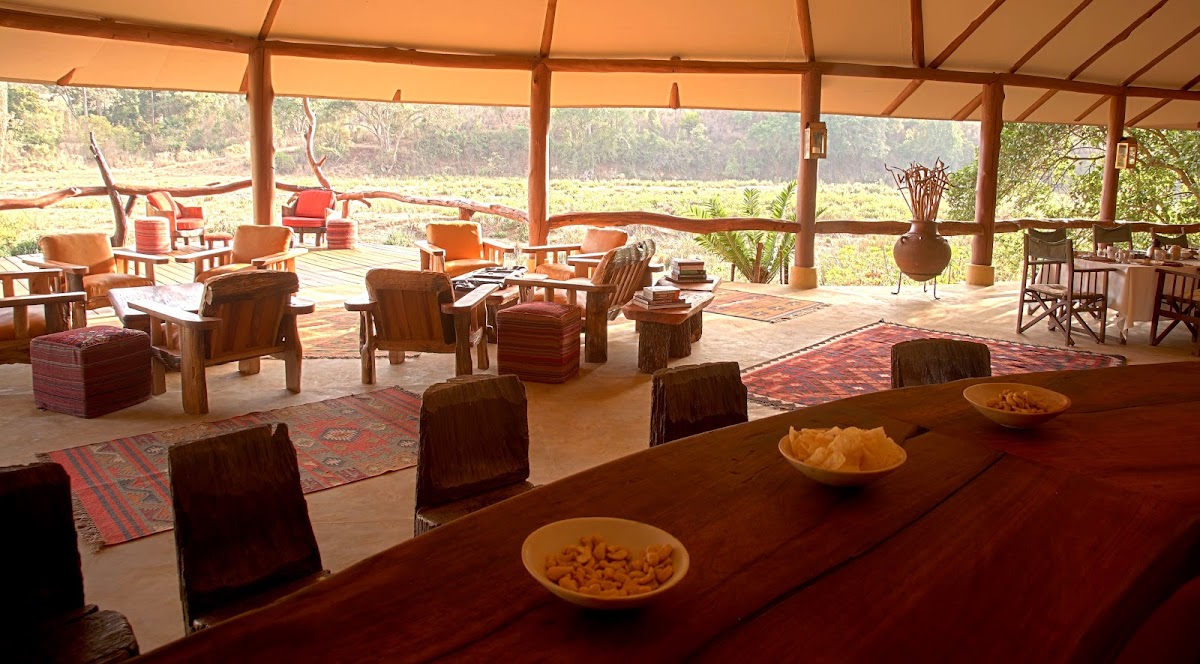 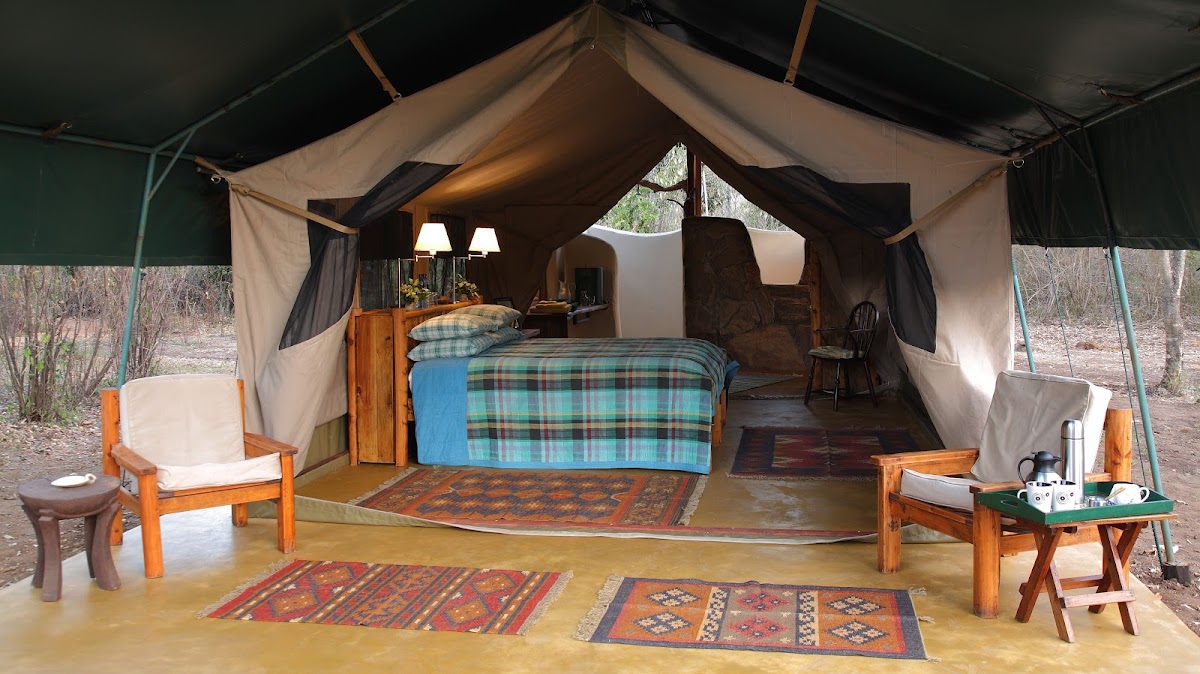 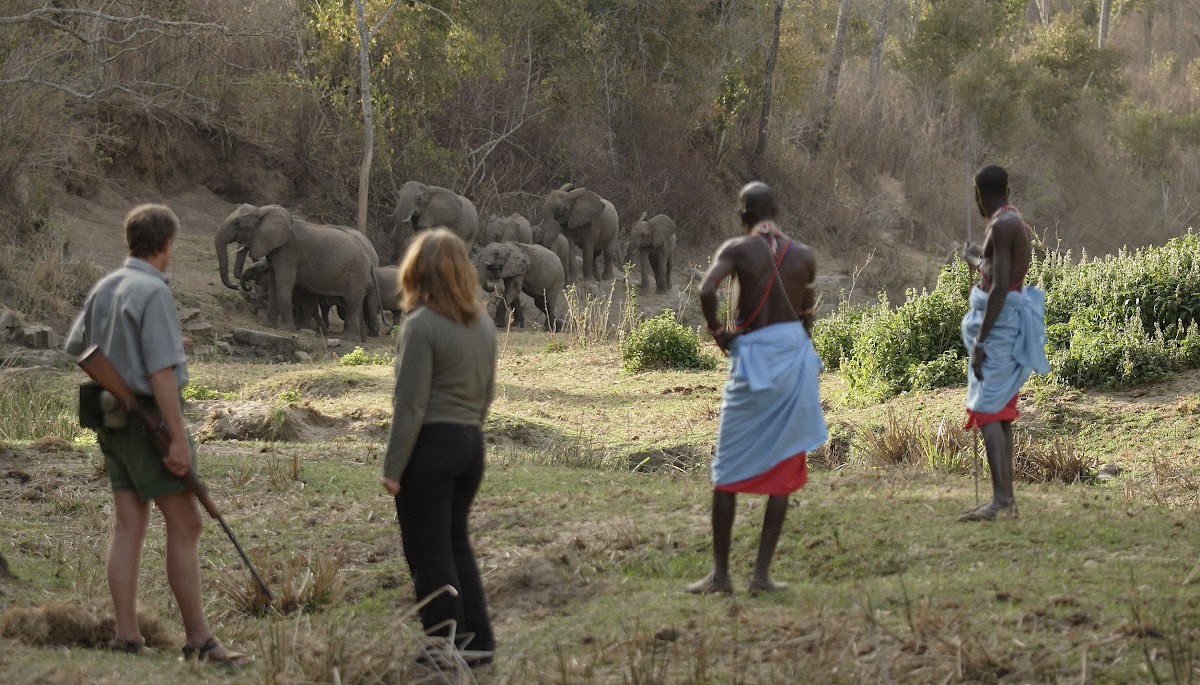 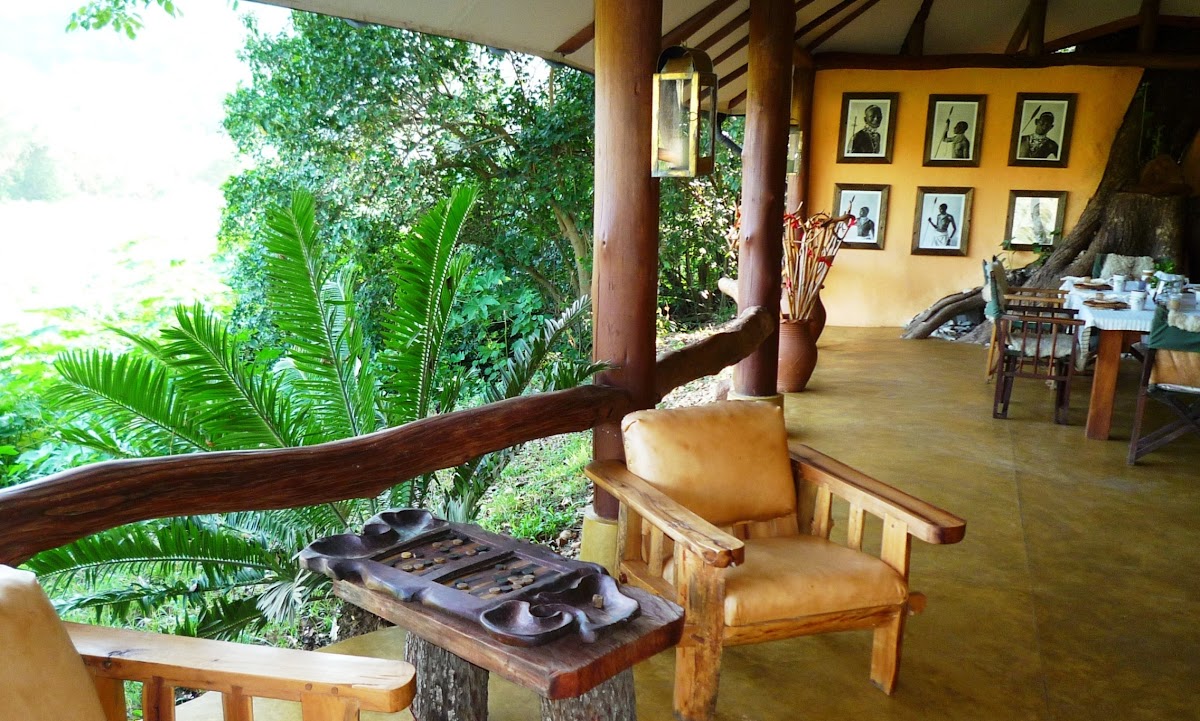 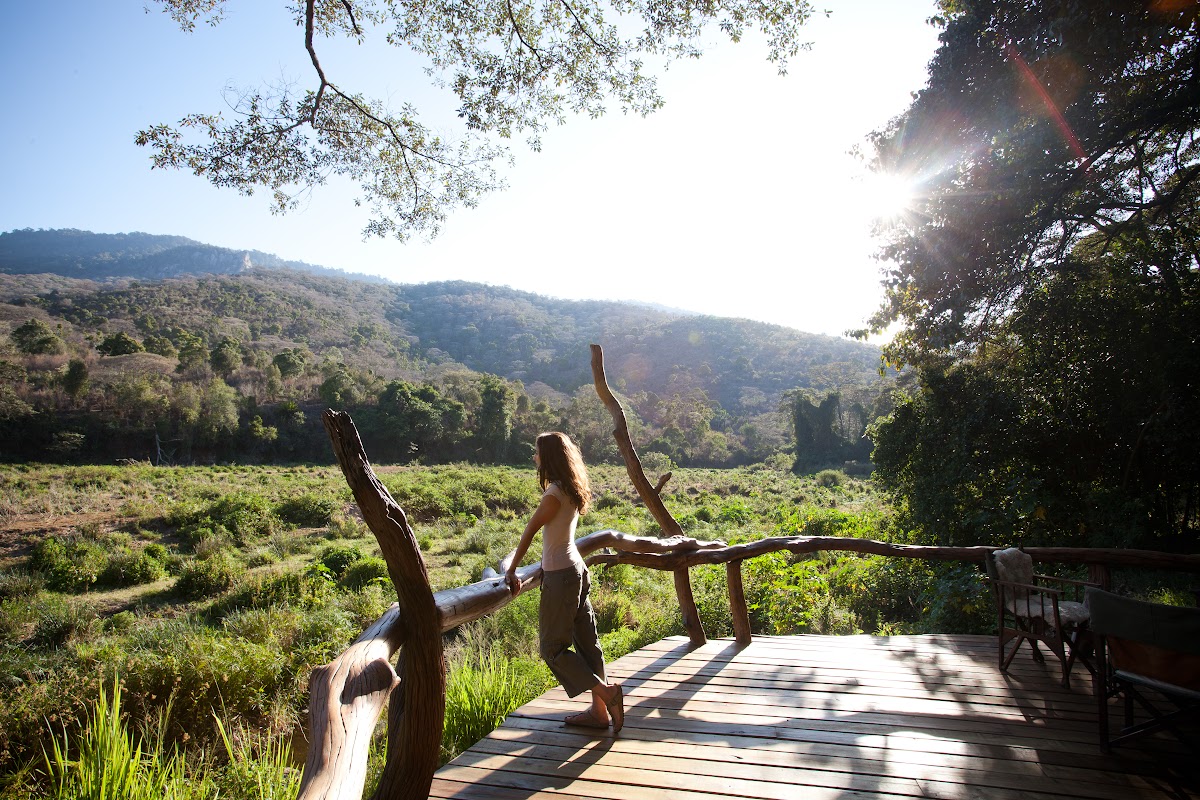 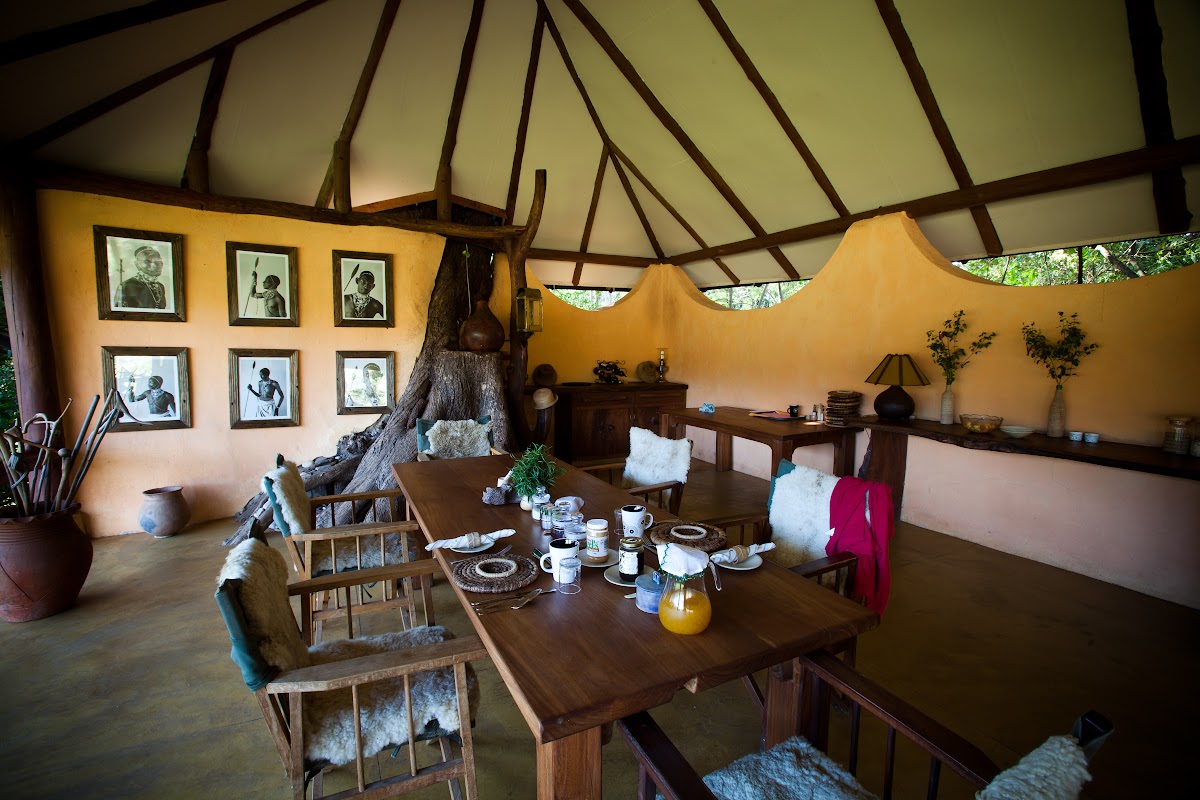 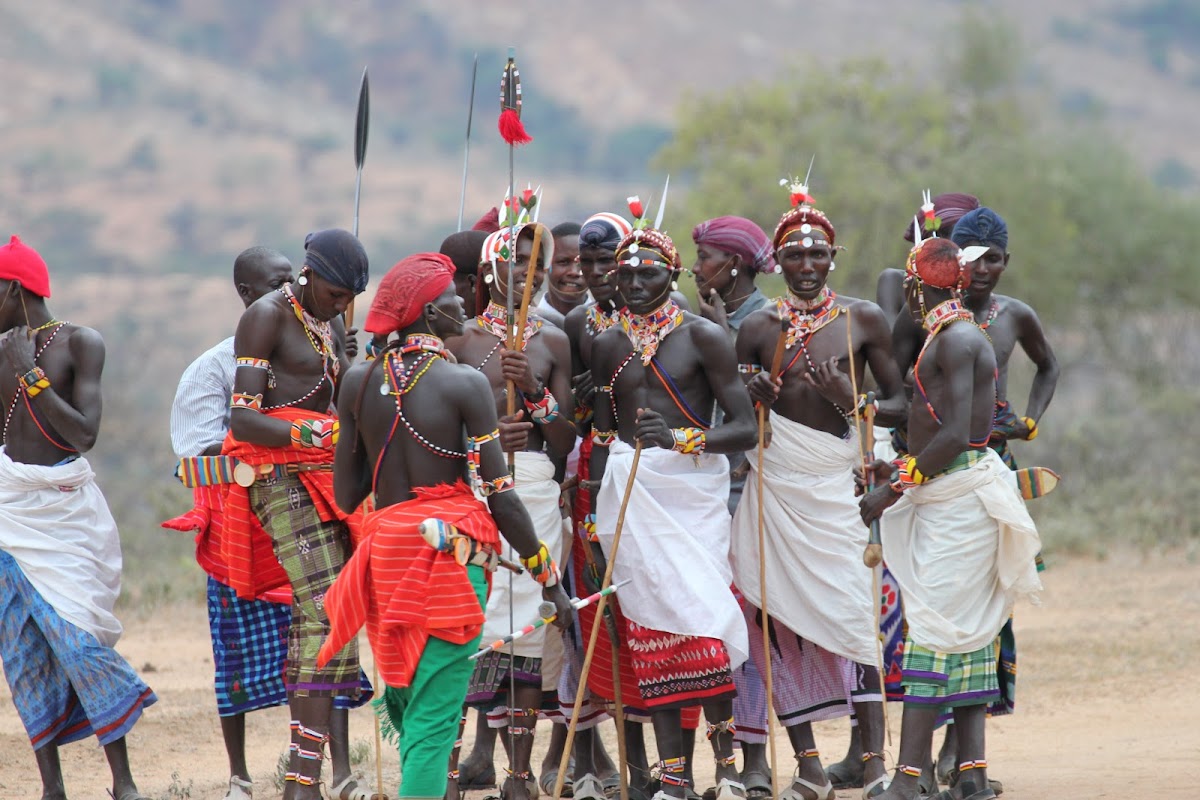 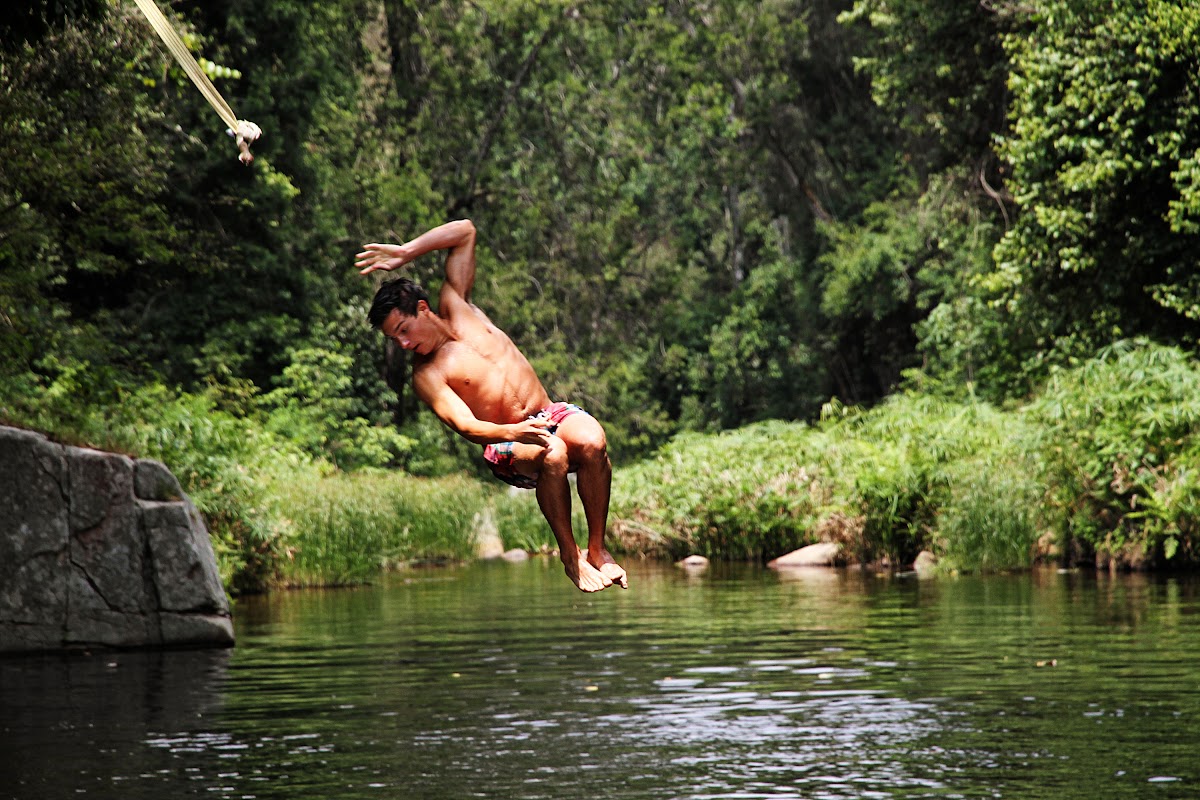 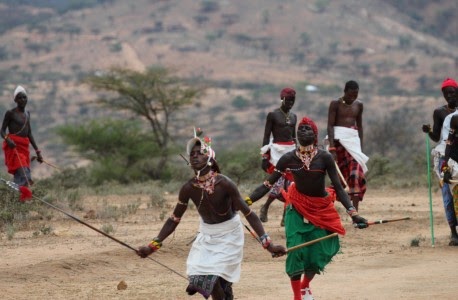 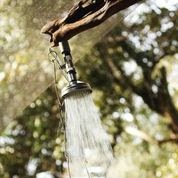 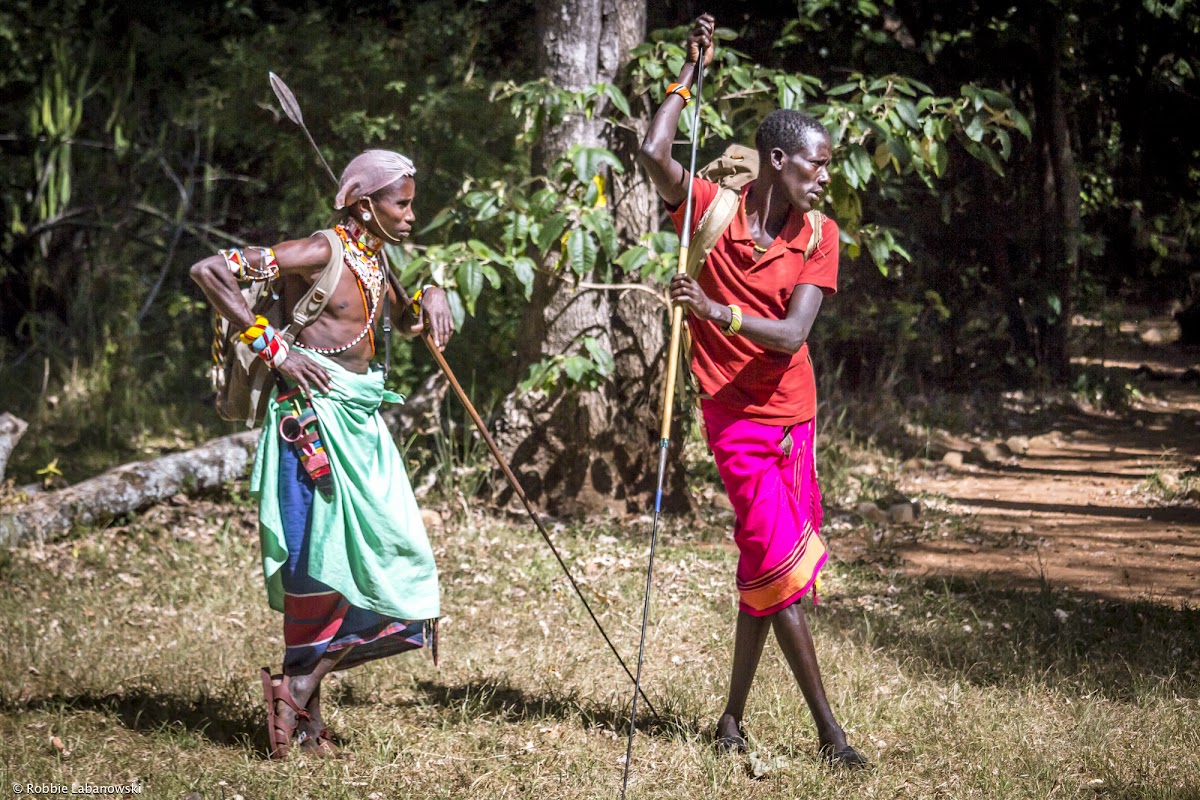 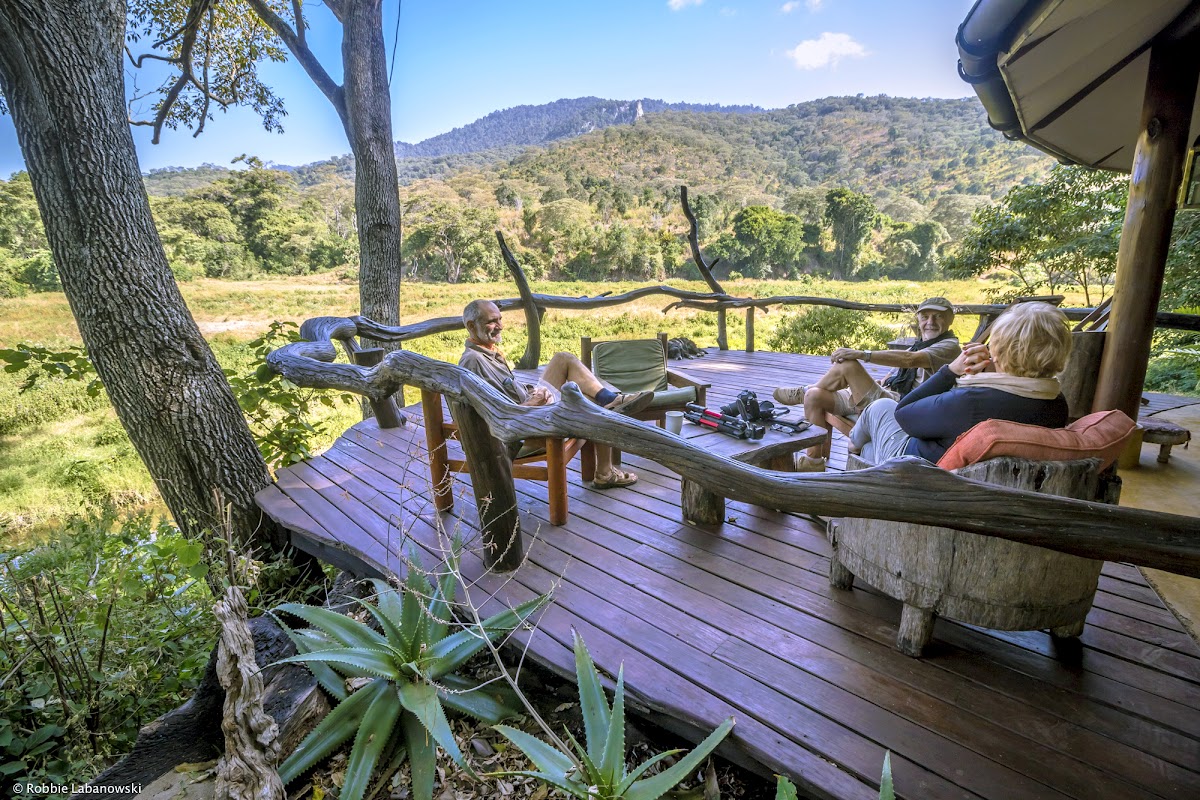 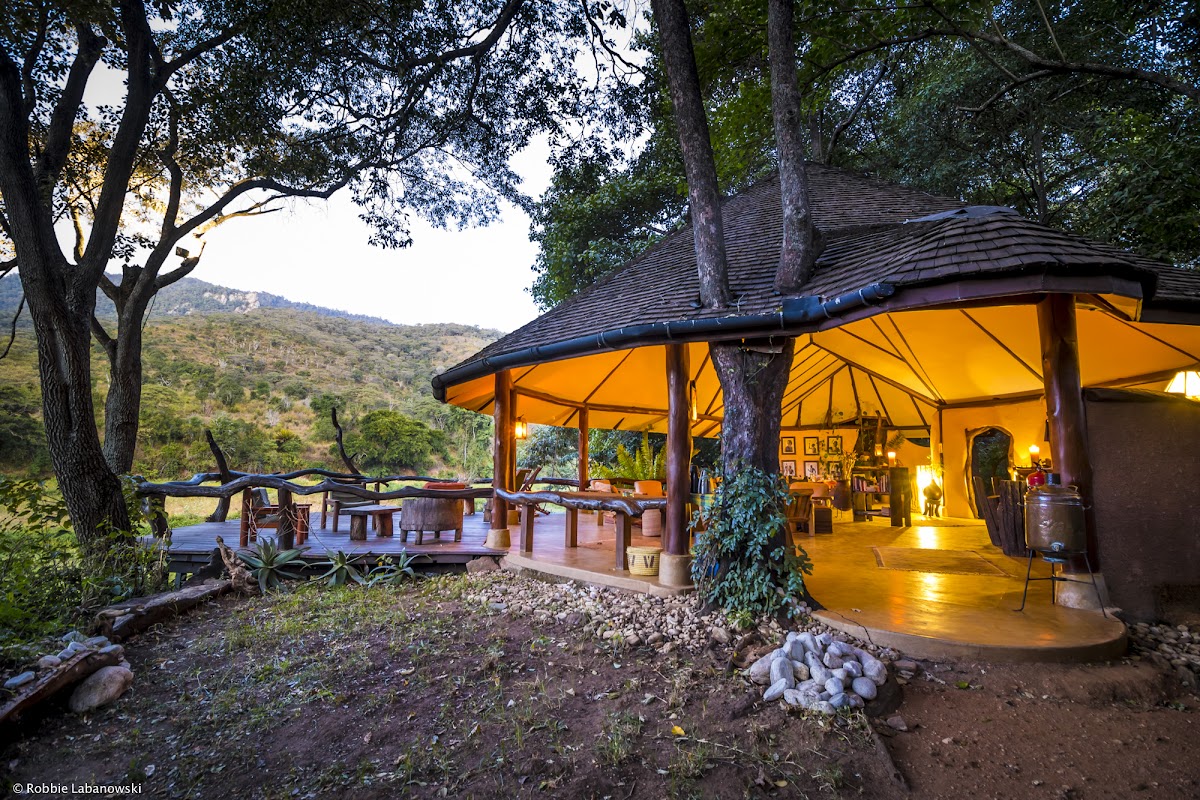 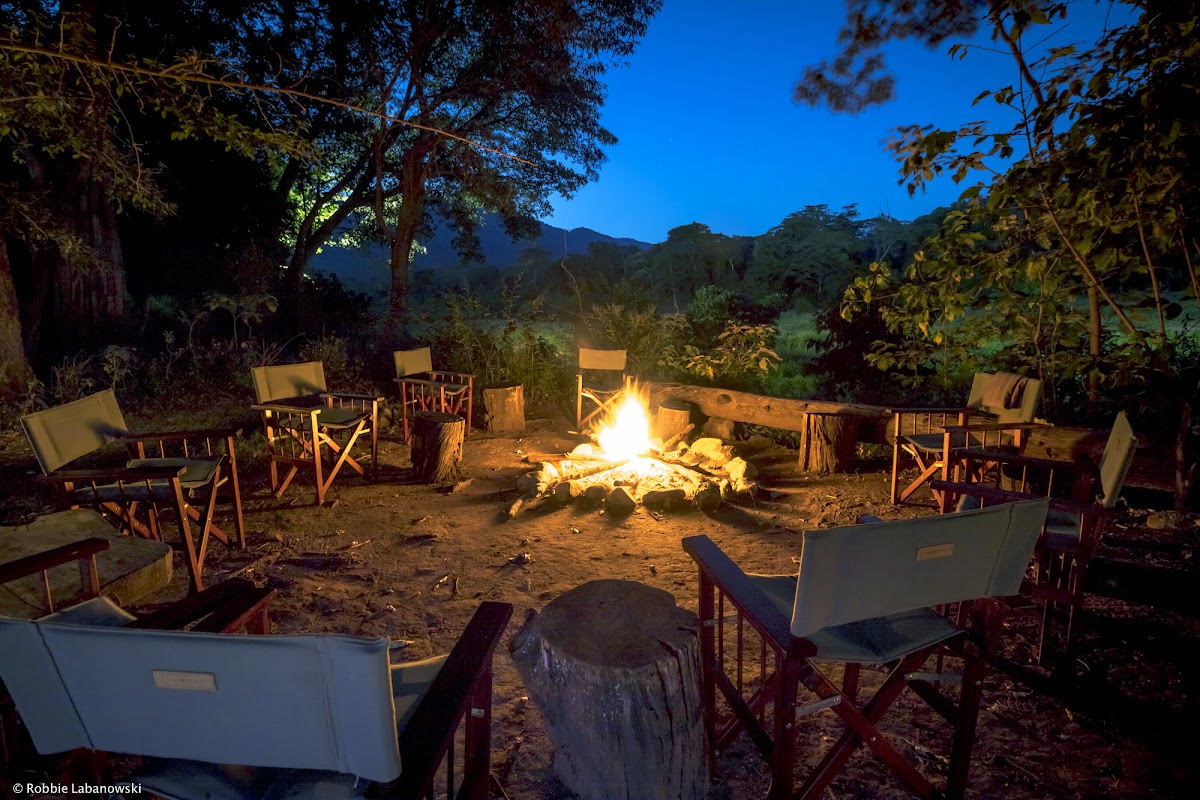 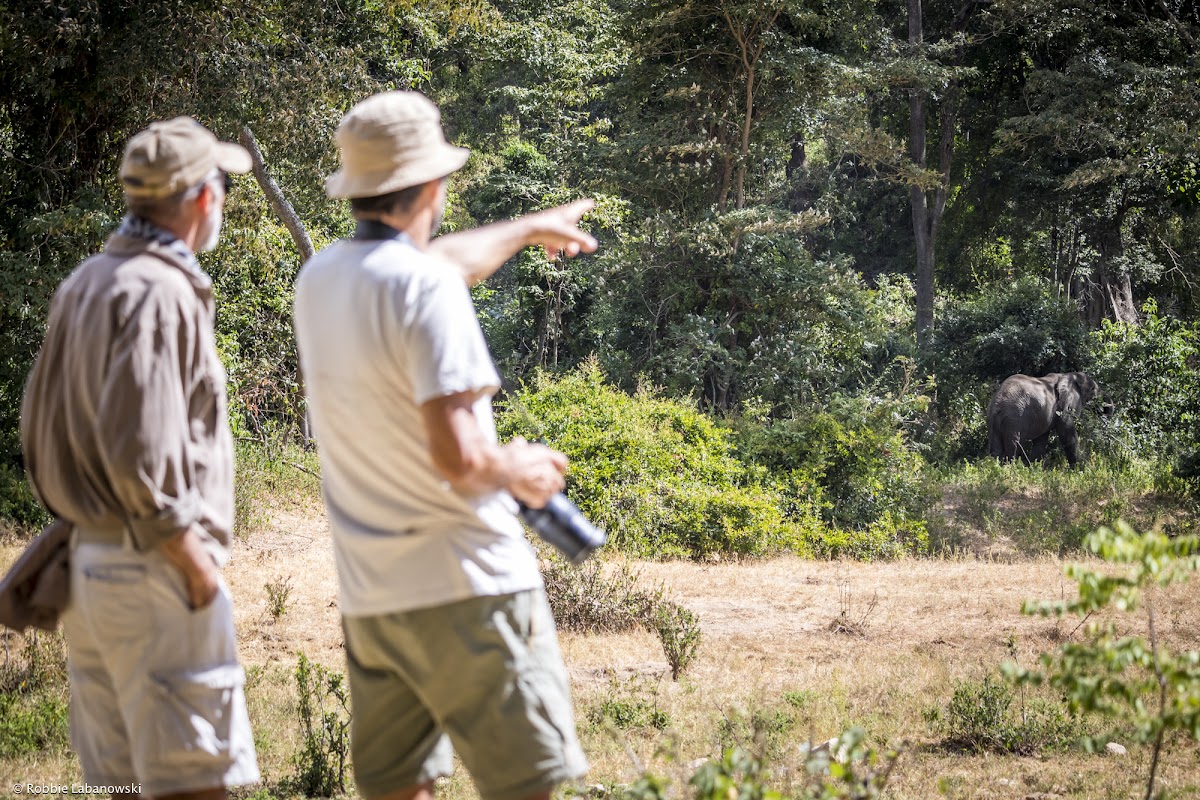 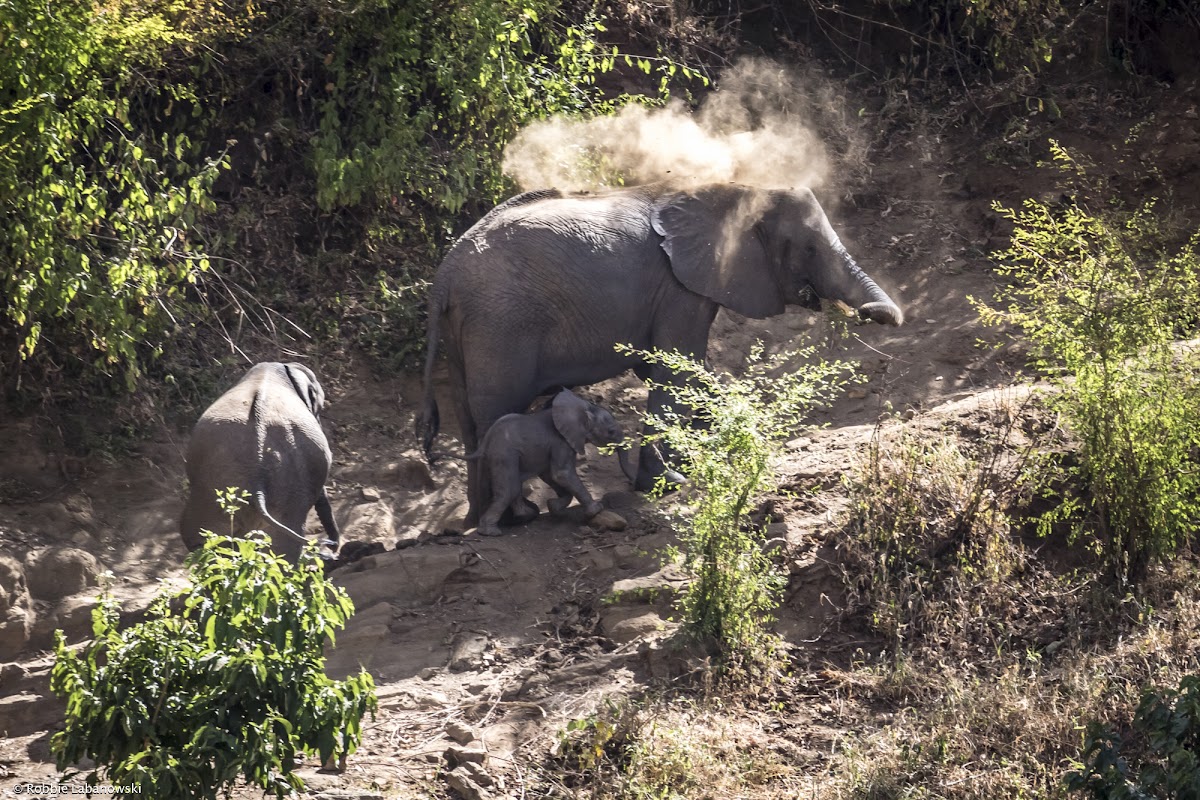 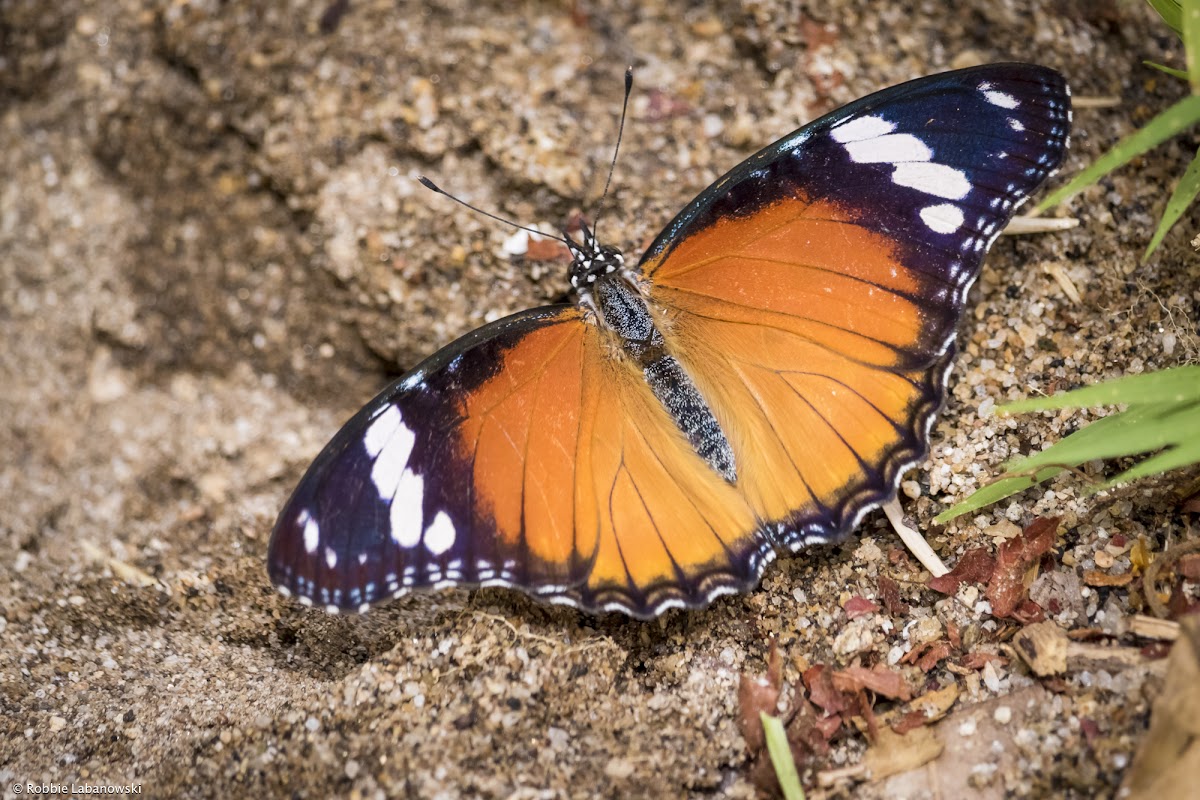 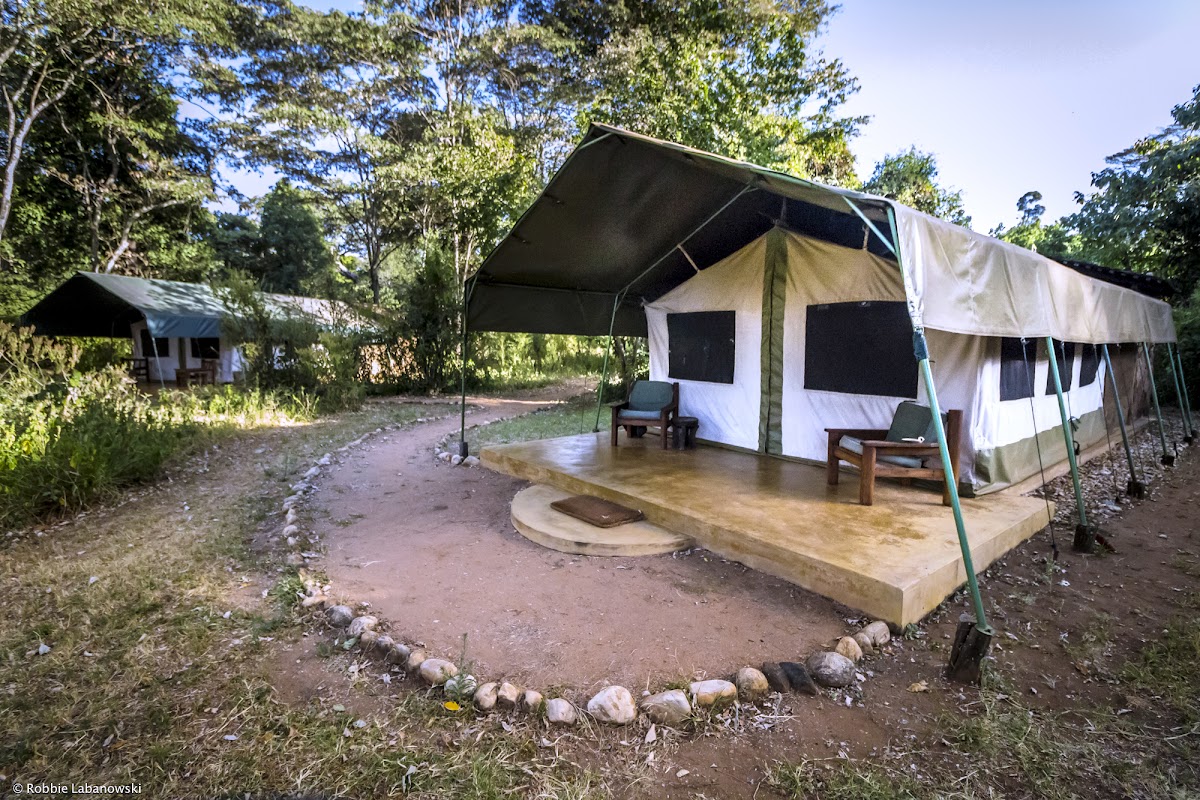 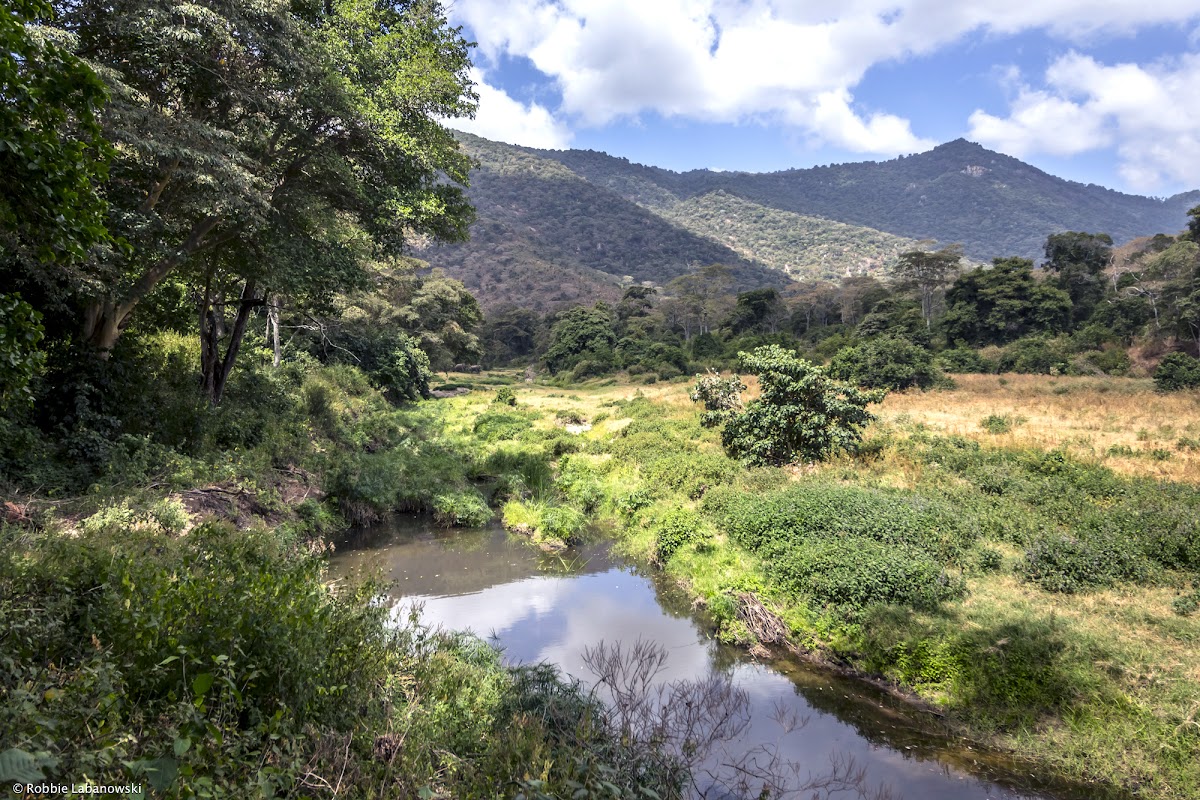 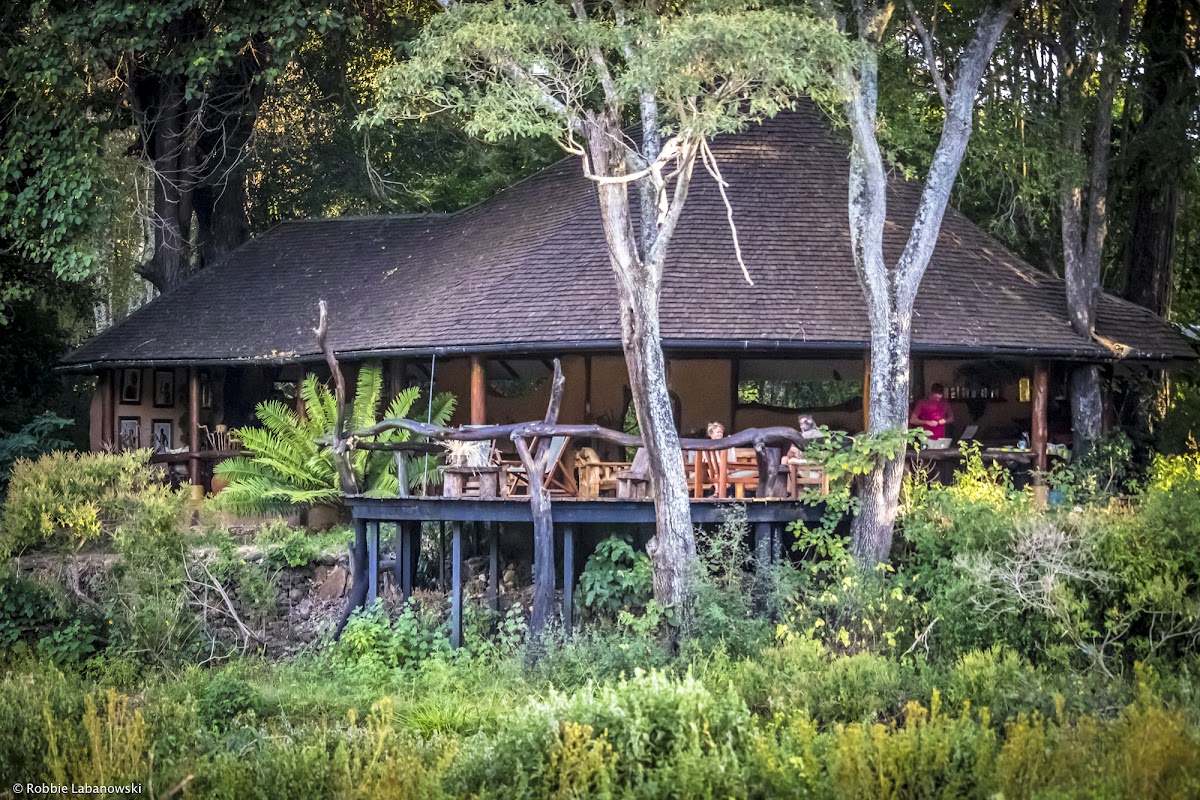 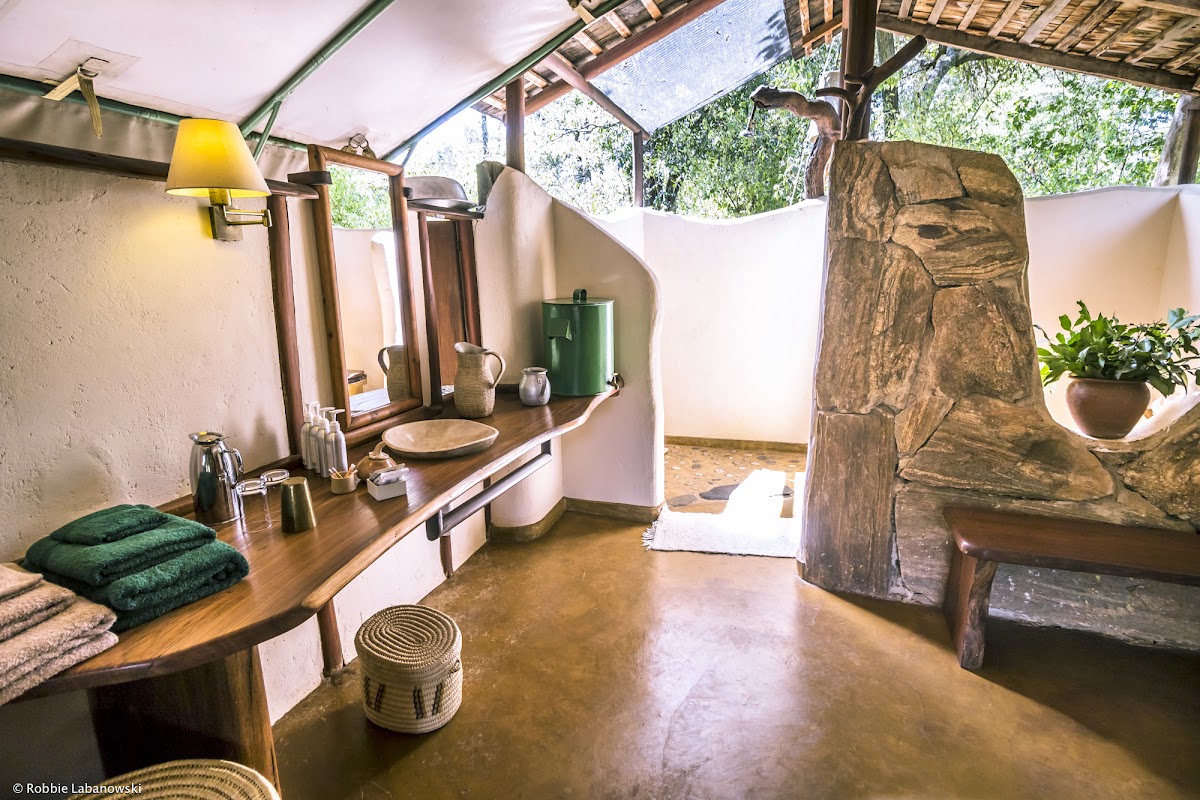 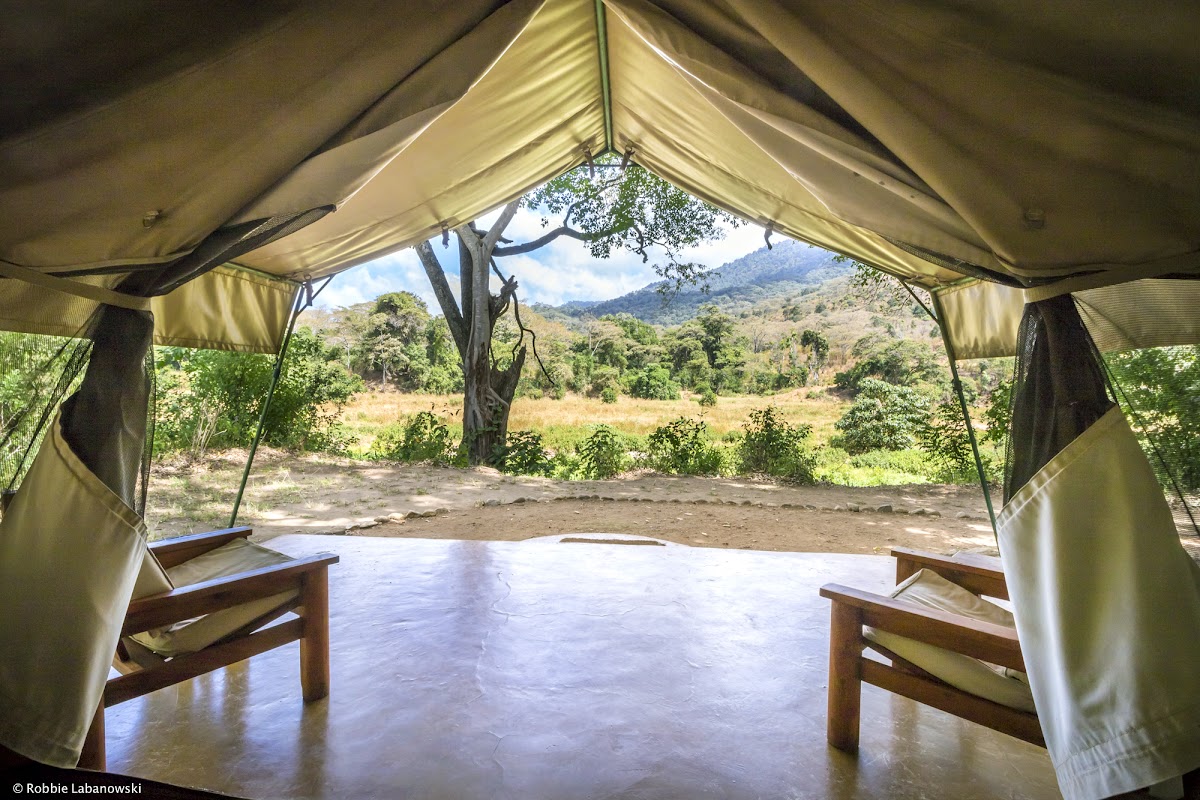 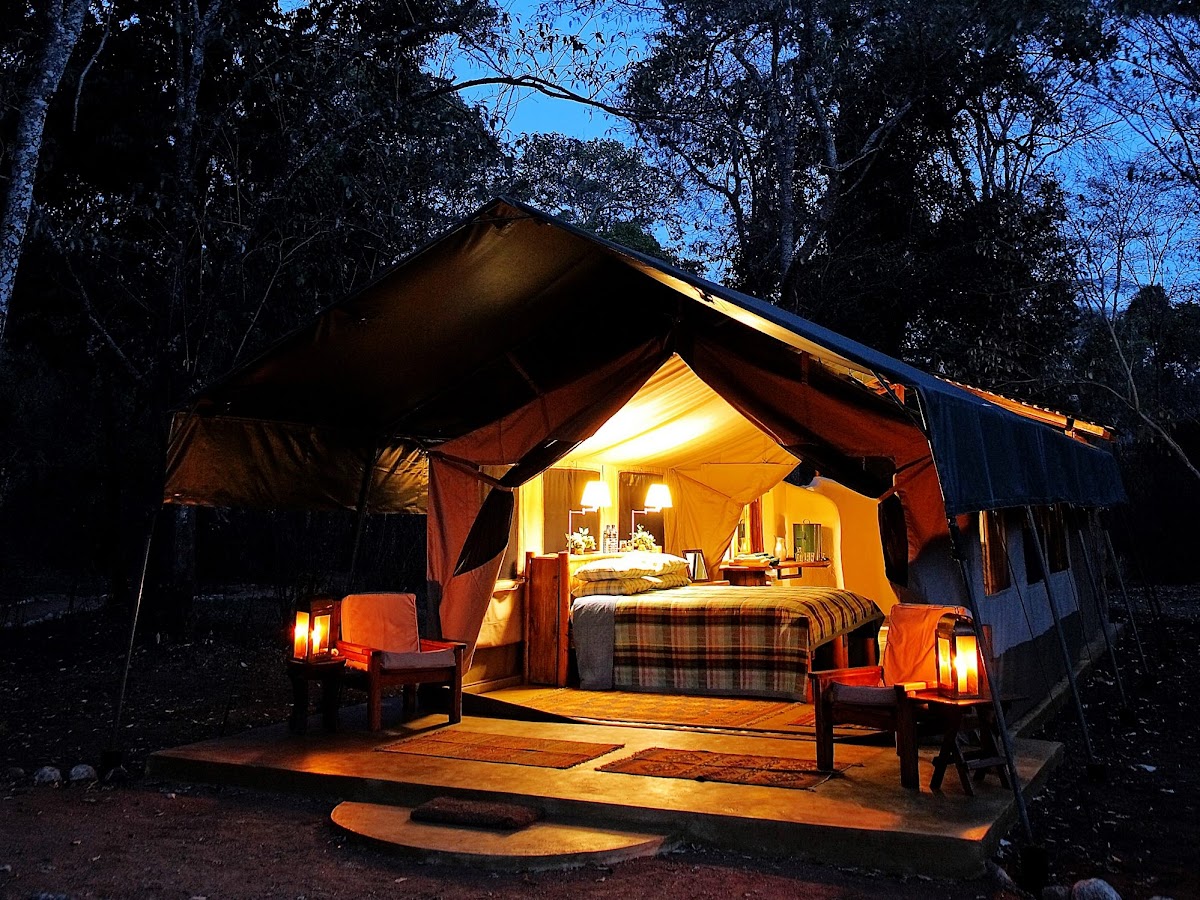 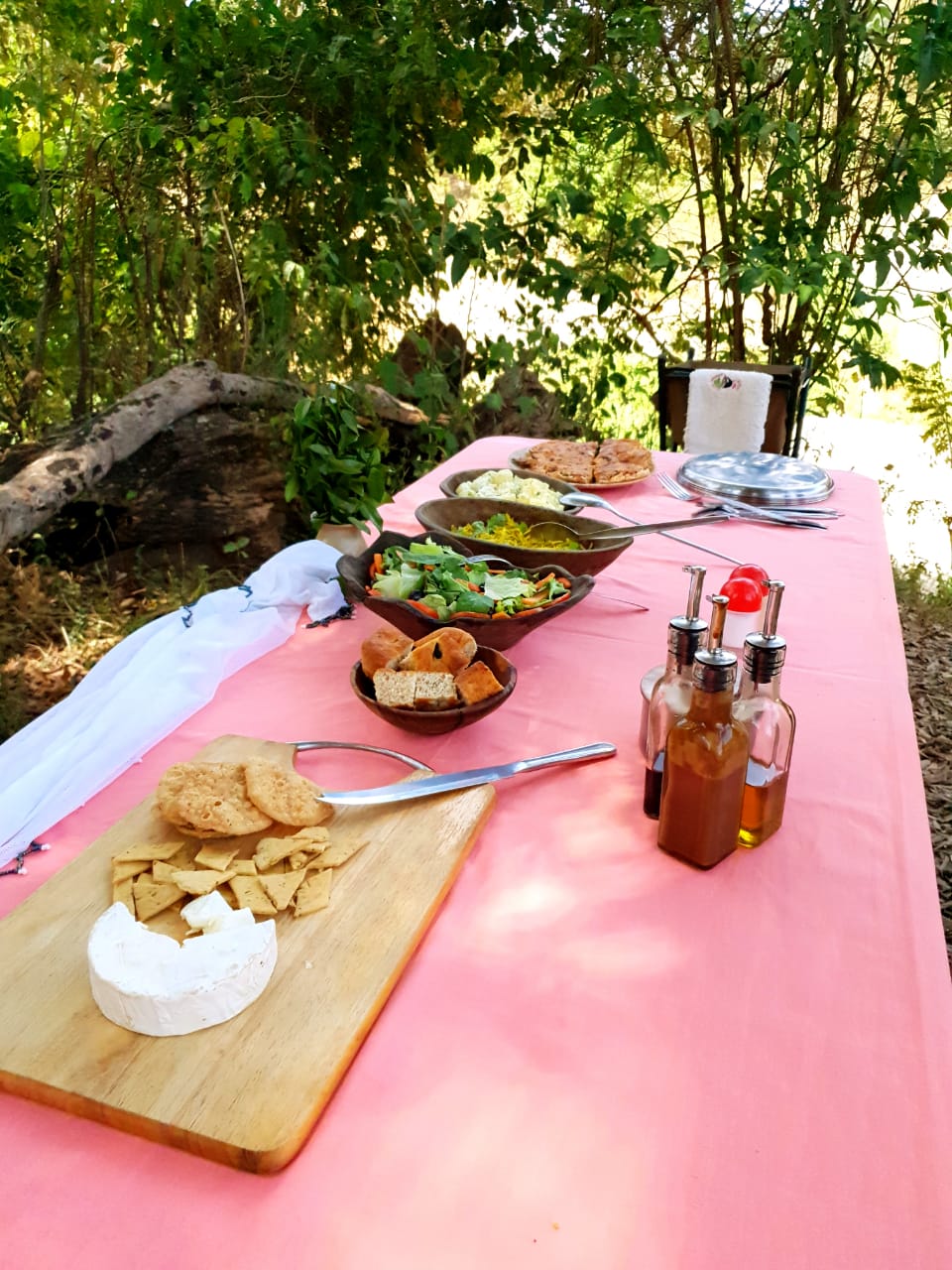 Withdrawn from the dry savannah plains and secluded in verdant ancient forests, Kitich is like no other camp in East Africa. On the slopes the Matthews Mountain Range you can step into a world held in harmony between the indigenous Samburu people and the beasts roaming the age-old forest, untarnished by urban modernity. With only 6 tents available, you’ll truly feel like you’re part of this world too. Instead of traditional game drives, you can pick from up to 22 walking trails that’ll take you deep into the forests where you can walk alongside crystal clear streams, follow the trodden tracks made by elephants, or stalk a wandering lioness with your trusty Samburu guide.

Kitich Camp sits on the banks of the Ngeng River along the slopes of the Matthews Mountain Range, known as the Lenkiyio hills to the Samburu people. The Matthews Mountain Range surrounds the Namunyak Wildlife Conservancy, which was established as a collaboration between the Samburu people and the Northern Rangeland Trust and serves as a critical wildlife refuge. The forests around the camp are home to a number of wild forest orchids and the elusive, pre-historic-looking giant cycad. It is also the only location in Kenya to support a population of De Brazza monkeys.

To reach the camp, guests can fly to the Samburu Kalama airstrip to be picked up and driven to the camp, which is about 4 hours away. Or they can take a private charter flight to the Ngelai airstrip, which is only 45 minutes away from the camp.

Kitich was first established in the 70s by safari guide Miles Burton to host clients, then in the 80s it became a post for monitoring rhinos. In 1996, the site was bought by Giulio Bertolli and made his home for the next 12 years before he eventually sold it on to those he trusted to maintain the camp’s values and protect everything that made it special. The camp has stayed fully immersed in its natural origins and connections to the local communities – over 95% of the employees are Samburu people and some have worked with Kitich for over 20 years.

The affiliated Namunyak Wildlife Conversation Trust was established in 1995 and has done amazing work in protecting wildlife in the region. After extreme ivory poaching in the 70s and 80s, no elephants were left in the Matthews Range region by 1985. But through the Conversation’s tireless efforts there are now thousands of elephants flourishing safely in the area, alongside thriving populations of buffalo, lion, leopard, cheetah, Wild dog, greater and lesser kudu, gerenuk, giraffe, impala and dik dik.

True to its origins, Kitich Forest Camp has kept itself operating on a small scale with just 6 canvas safari tents, designed to blend in to the natural surroundings and leave as few traces as possible on the landscape. Rustic and charming, they’re set along the south banks overlooking the valley of the Ngeng River, where elephants, painted dogs, buffalo and antelope often come to drink.

Each tent can comfortably fit a double bed or 2 twins, except for Tent 6 which is a bit larger and can fit a double bed and 2 twins at the same time. The furnishings are aptly simple without compromising your comfort, and each tent has its own en suite bathroom, equipped with a flushing loo, wash basin and classic safari bucket shower.

Because only a small number of guests can stay at Kitich at any one time, meals are shared together in the open-plan dining tent, overlooking the verdant river valley. Their daily menus are displayed in the adjoining lounge so there’s plenty of time to choose! Breakfasts are a combination of continental and hot cooked dishes. At lunch, food will usually be served from a buffet offering selections of salads, breads, and a couple of main dishes. Dinners are a three-course affair, served a la carte.

Take full advantage of the gorgeous ancient forest surrounding the camp with no less than 22 different walking trails. Accompanied by Samburu guides you can get lost – figuratively! – in a world untouched by humankind. There are over 350 species of bird and 150 species of butterfly making their home in the forests, along with forest elephants, leopards, lions, buffalo, wild dogs, greater kudu, waterbuck, giant forest hogs and the only population of De Brazza monkeys in Kenya.

Instead of a chlorinated artificial pool, Kitich has a spring-fed, crystal clear natural swimming pool where guests can take a refreshing dip and swim against the backdrop of the gorgeous forest.

While staying at Kitich, guests will have the wonderful opportunity to visit Ngilai village and the nearby Singing Wells. The Singing Wells are a deeply intimate and ritualised aspect of Samburu culture, whereby the Samburu people sing together as they draw water from the well. The wells are also traditional meeting places to exchange stories and news, and for the community to sing together. Guests are also welcome visit the local village, where they can meet the families living there and learn all about their daily lives, customs and culture.

After dark the river valley is lit up by floodlights and from the camp’s cosy lounge and deck, you can watch out for animals visiting the river for a night-time drink or forage.

The Namunyak Wildlife Conservancy is part of a network of 39 conservancies across northern Kenya that are supported by the Northern Rangelands Trust (NRT). They work together to conserve the wildlife and ecosystems as well as to give the communities more agency over themselves and provide them a platform to develop sustainable enterprises and livelihoods.

Sustainable tourism is a key piece of the puzzle; it provides jobs and therefore steady incomes for local people and generates much needed revenue for conservation projects. Kitich Camp employs over 95% of its permanent staff from Namunyak and sources supplies locally. 60% of their tourism revenue goes towards conservancy operating costs, which covers things such as rangers’ salaries and fuel for vehicles. The rest goes towards social projects such as education and water supplies.

Kitich Camp supports the local primary school through the Wildlife Warrior Scholarship Program, which was established by the Land and Life Foundation. The program was created to promote the sharing of knowledge between generations, to encourage innovative thinking and proactivity among the young generation in wildlife conservation, and to take those with potential to be outstanding conservationists through to higher education. ‘Since its launch in 2014, the Wildlife Warrior Program has already worked with over 2,000 children.’

Kitich Camp is mindful of how it disposes of all its waste. Water waste from laundry and showers is managed using soak pits, and waste from the kitchens is filtered through a grease tap before also being drained into a soak pit. Solid waste is separated and carefully monitored so the camp can keep track of the volume and types of waste they’re producing so that they can set smart waste reduction goals. Organic waste is composted and used for the kitchen’s gardens, whereas non-biodegradable waste is transported to Nairobi for recycling. The camp also provides its guests with metal water bottles to reduce the amount of plastic waste.

Solar energy is the primary source of power for the camp and its facilities, and has so far been hugely successful in reducing its pollution. This has a really beneficial impact on the environment because solar energy is the most efficient renewable energy source, reduces air pollution in replacing fossil fuels and it doesn’t require water to make energy.

It has been recommended that visitors do not bring children under the age of 12 for safety reasons.