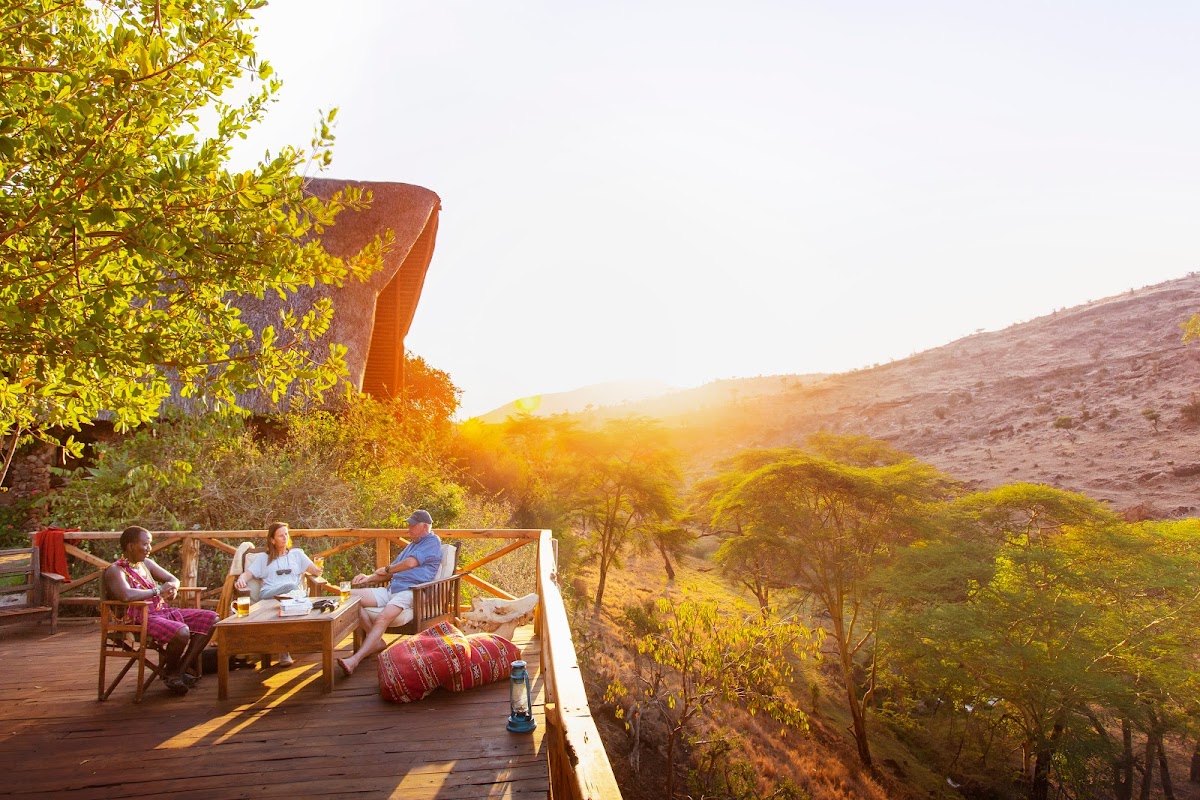 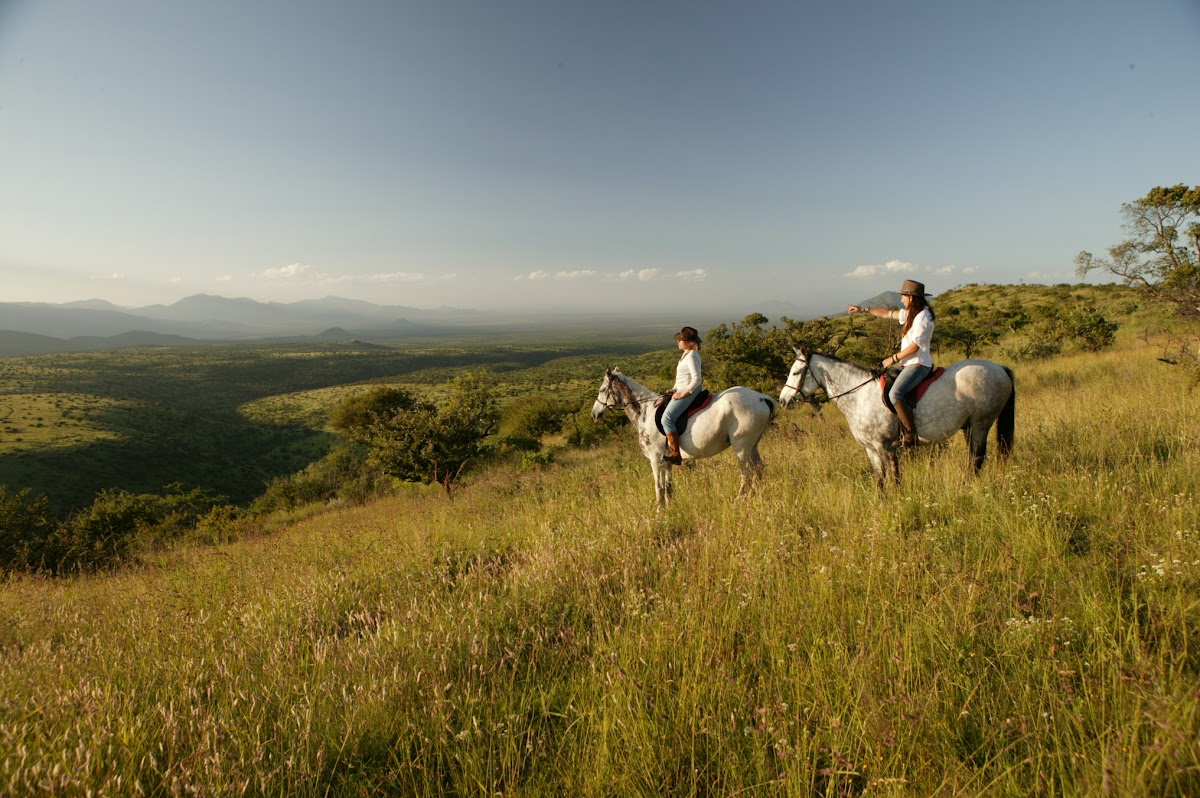 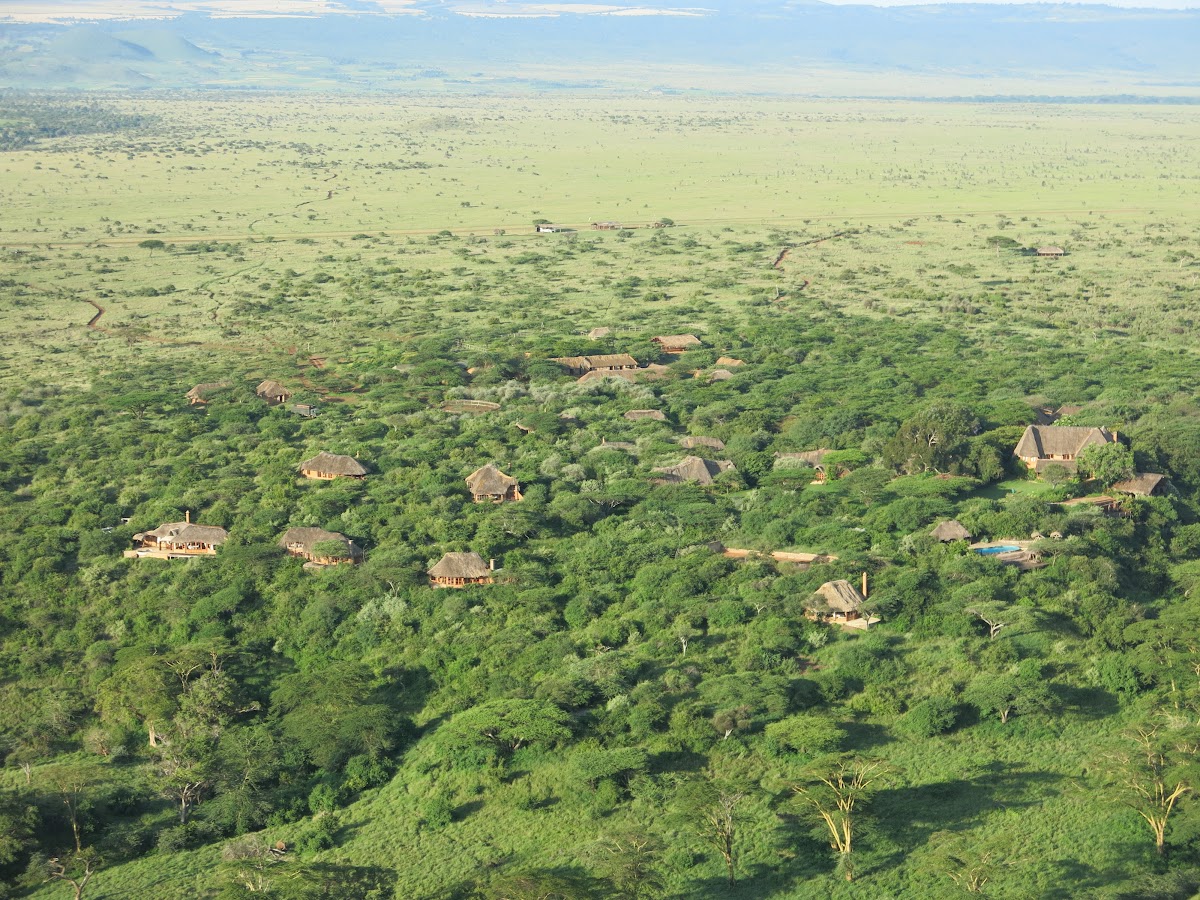 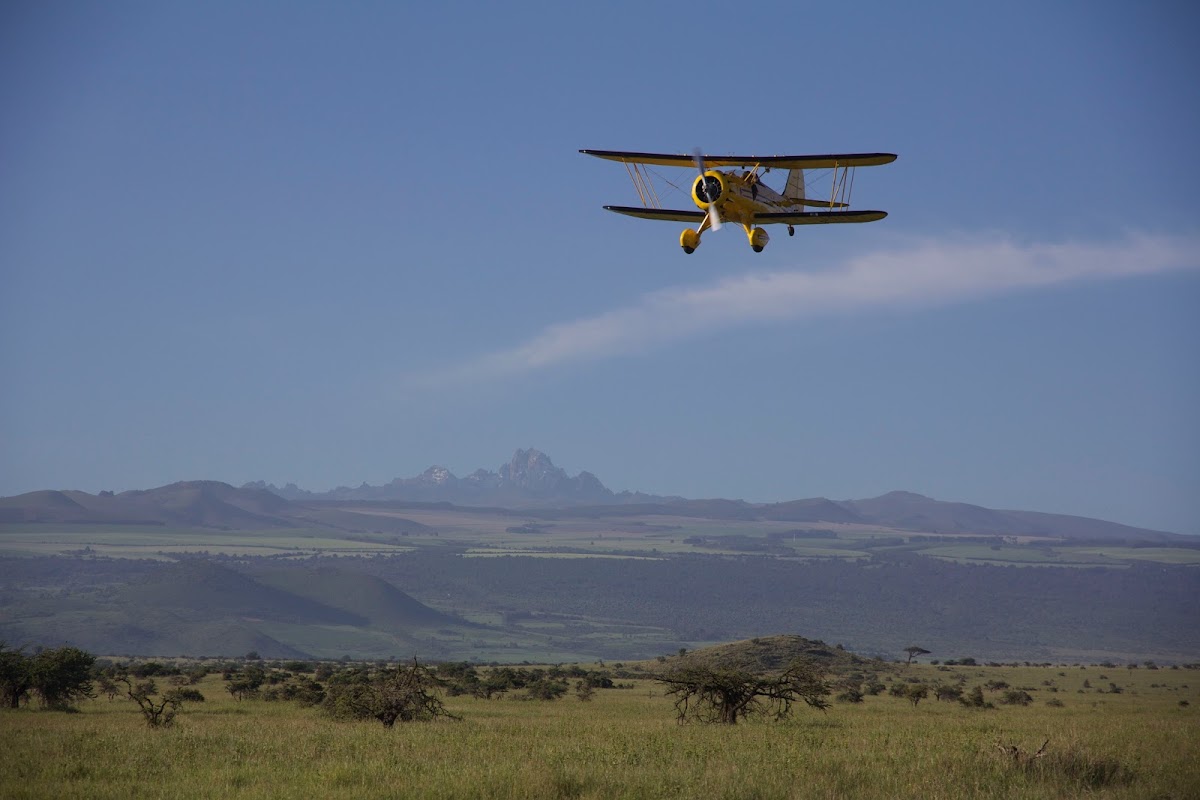 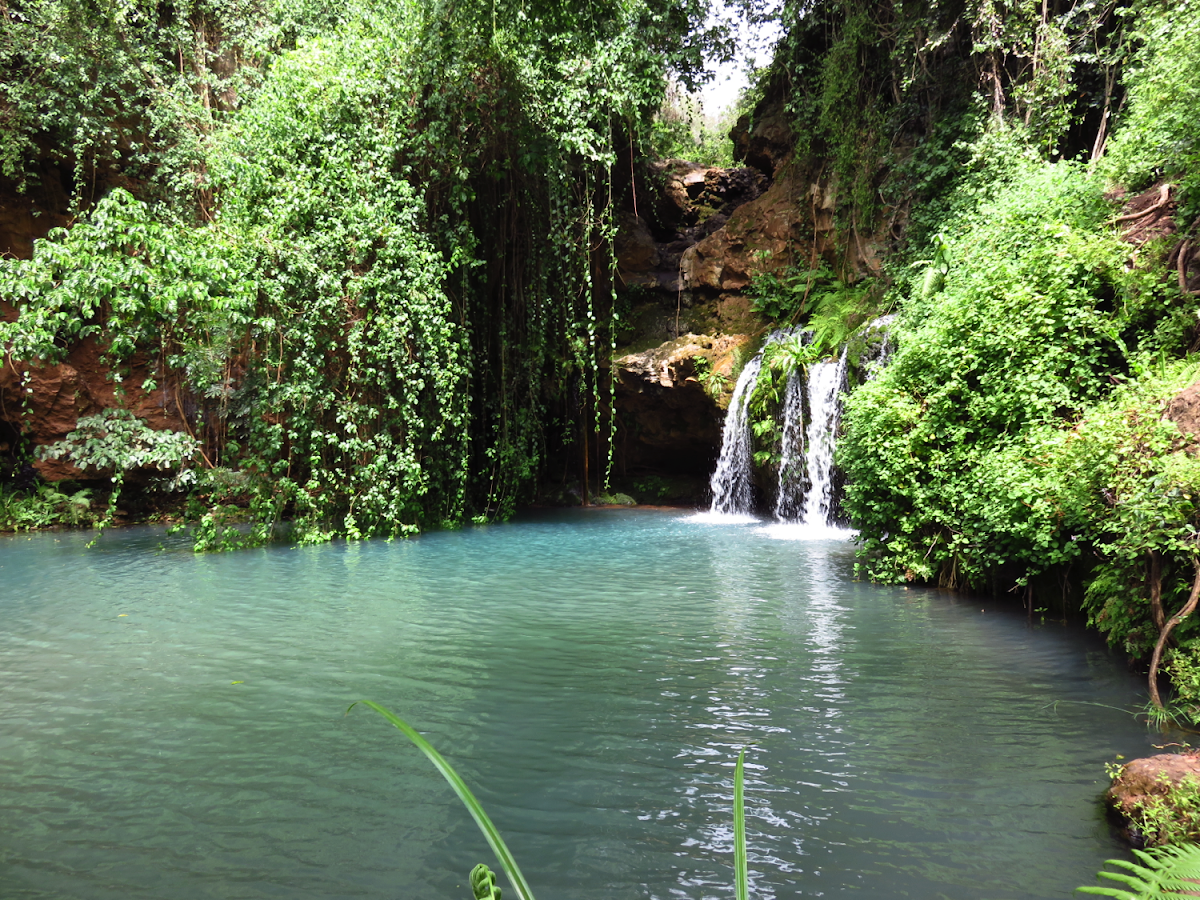 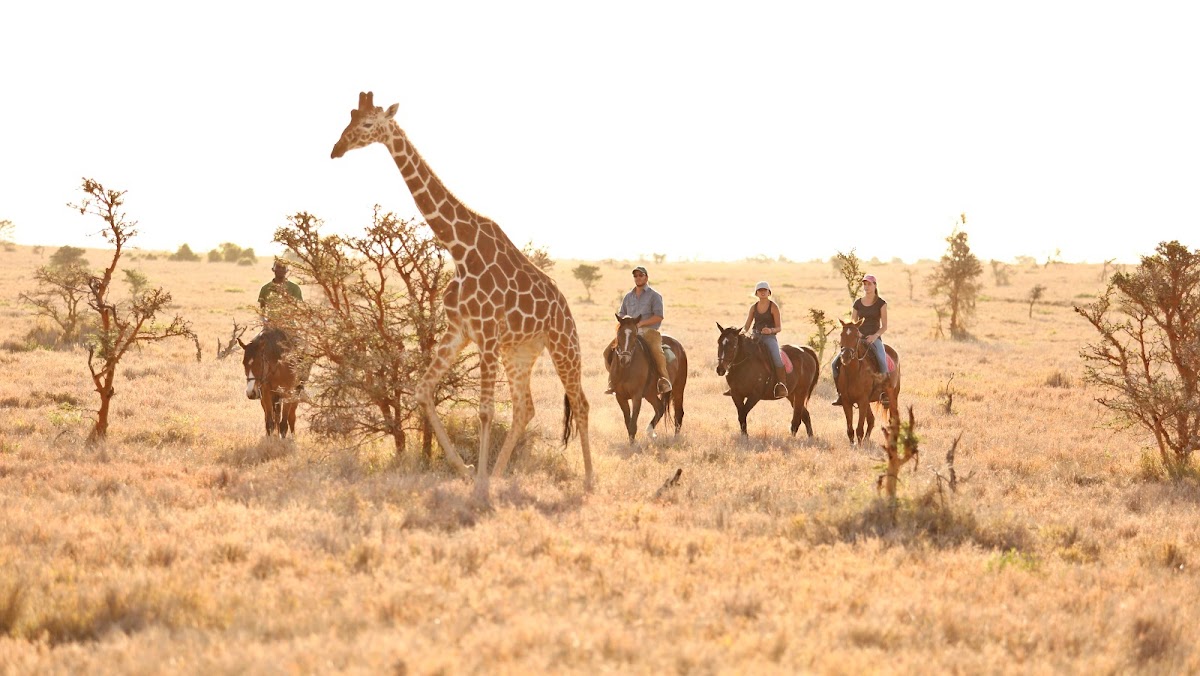 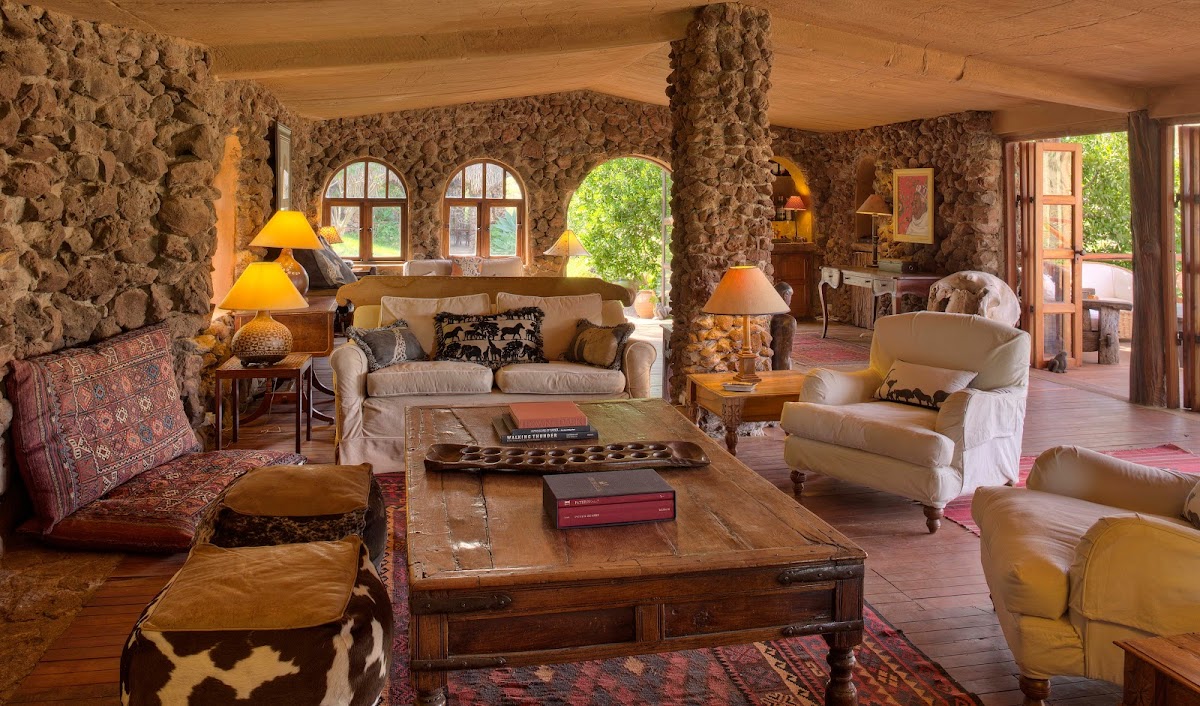 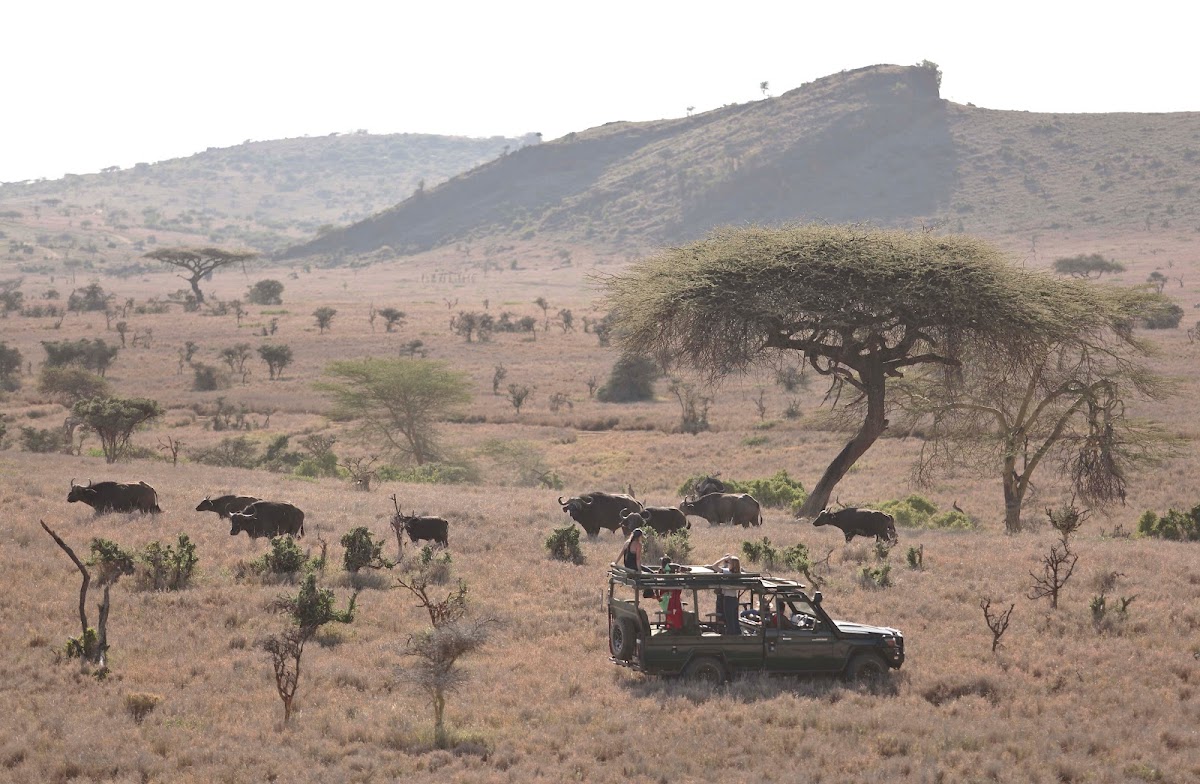 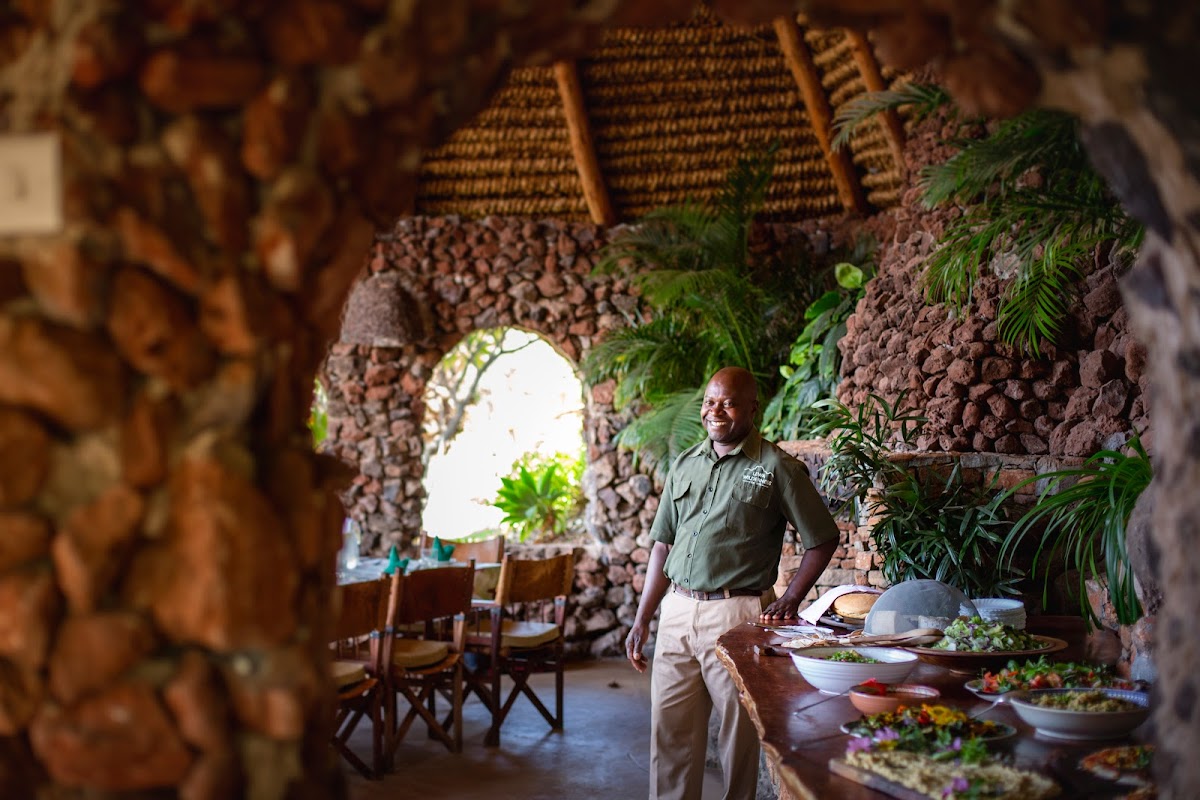 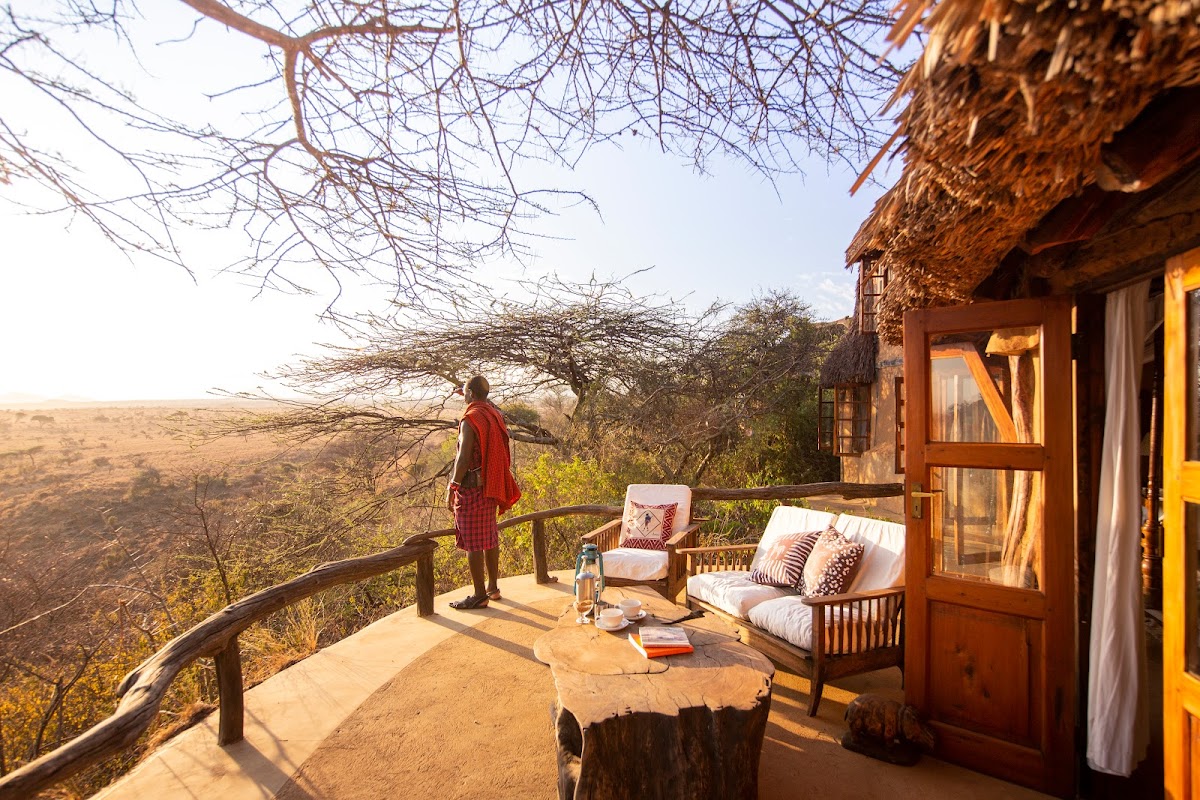 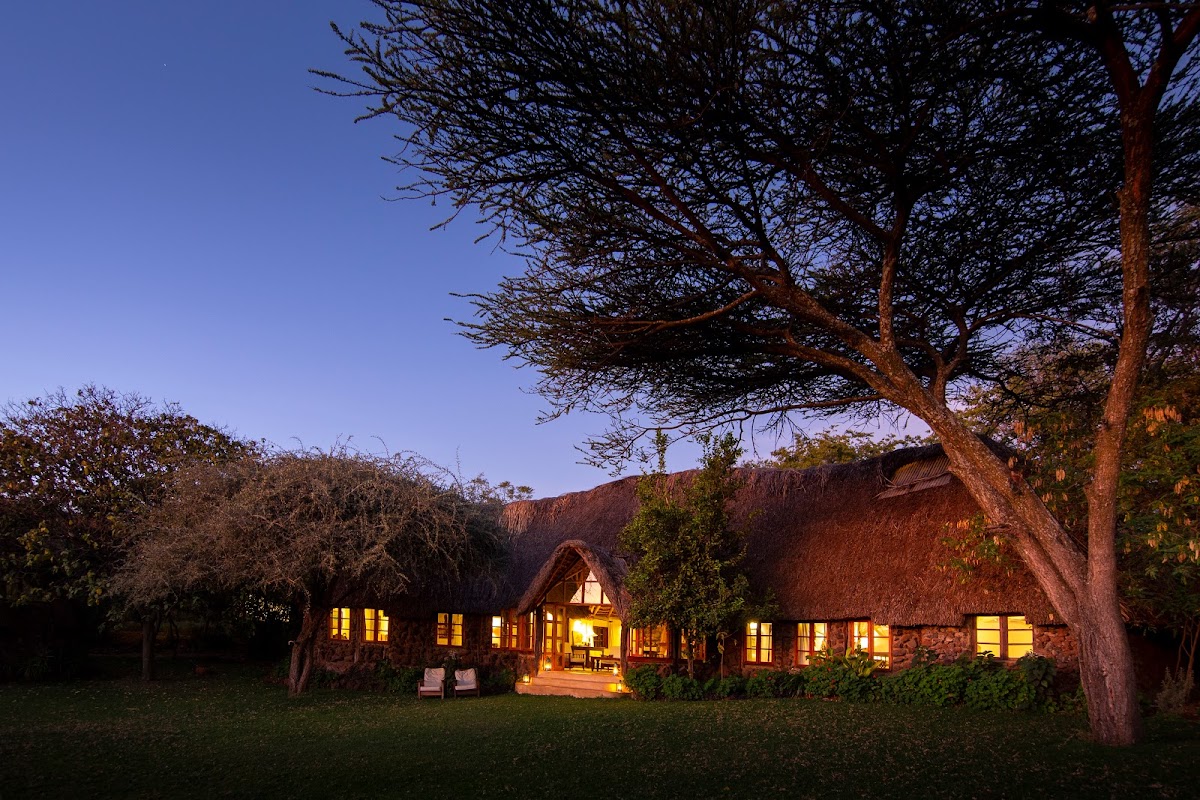 Tucked away amongst the tall trees that crown the hillside overlooking the Eastern Marania Valley, rests Lewa Wilderness – a picturesque safari lodge where guests can enjoy the incredible wildlife and stunning landscapes within the Lewa Wildlife Conservancy. With just nine cottages, all spaced apart for privacy, guests can enjoy an exclusive safari experience that allows you to immerse yourself in the heart of the wilderness. Lewa Wilderness has its own beautiful gardens, a peaceful space where guests can relax during the hottest part of the day, and enjoy a good book from the lodge’s library. You can also take a refreshing dip in the lodge’s pool, which looks out over the endless plains, and relax in the shaded lounge area beside the water. Unwind at the lodge and enjoy its tranquil atmosphere between exciting safari activities.

Lewa Wilderness is situated within the private Lewa Wildlife Conservancy. The lodge overlooks Lewa’s Eastern Marania Valley and is near the base of Mount Kenya. Guests are able to reach Lewa Wilderness by flying from Nairobi’s Wilson airport. Flights are scheduled daily to the Lewa Downs airstrip which is just a 20-30 minute game drive from Lewa Wilderness.

Lewa Wilderness stands within the Lewa Wildlife Conservancy, a sanctuary that spans over 62,000-acres and is home to 15% of Kenya’s critically endangered black rhino population. The lodge was originally a cattle ranch and is the family home of Will and Emma Craig. Will Craig’s parents, David and Delia Craig, ran the lodge before them. Lewa Wilderness was the first private ranch in Kenya to host guests.

In 1983, with the help of Anna Merz, David and Delia turned the site into a sanctuary for rhino to help protect the creatures from horn poaching, which had reduced their population by thousands in the course of a decade. In 1995, rhino populations were beginning to make a recovery due to the sanctuary’s translocation and breeding programmes, and the Lewa Wildlife Conservancy was created.

Guests can expect to see a wide variety of amazing creatures within the Lewa Wildlife Conservancy including both black and white rhinos, elephant, buffalo, hippo, giraffe, lions, leopards and spotted hyena. Game viewing is incredible during the dry season (June to September), when the sparse vegetation allows clear views of prowling predators, and the game congregates around waterholes in large numbers.

During the wet season (October to May), game is still abundant, but the transformed luscious green landscape can make smaller species harder to spot. The rejuvenated flora is perfect for birdlife, however, and guests will be able to see over 350 different species of bird. The wet season is also calving season, meaning guests can catch sight of adorable newborn animals.

The Hillside Cottages are scattered amongst the trees, overlooking the beautiful Eastern Marania Valley. Guests will also be able to hear the sounds of the river below, and may catch a glimpse of the giraffe and elephant that gather there to drink. Each of the cottages has a unique layout, but they all include a cosy fireplace and lounge area, minibar and verandah. The verandahs face out to the north, capturing the best views of the valley. Guests can enjoy a private dinner out here, under a canopy of glimmering stars.

The bedrooms consist of soft four-poster beds, patterned rugs and elegant hand-crafted furnishings. Each room has an en-suite bathroom where guests will find a flush loo, basins, and bathtub. One of the Hillside Cottages is equipped for families, and features an additional bedroom with its own en-suite bathroom, and a larger verandah with a private plunge pool.

Lewa Wilderness has 3 very large cottages that rest within its charming gardens. The garden cottages include two spacious bedrooms, one with a king-size bed and the other with two queen-size beds. The bedrooms both lead to their own large en-suite bathrooms with double basins, a flush loo and an indoor shower. The rooms meet together at a comfortable lounge area with a minibar and homely fireplace.

Snuggle up by the crackling flames and enjoy an evening with your family, surrounded by views of luscious grass and beautiful flowers. The lounge’s double doors lead out to a private verandah, meaning guests can sit and relax either in or outside. The cottages thatched roofs will help to maintain a comfortable temperature without the need for air-conditioning and they have 24-hour lighting which is solar-powered.

Guests can enjoy three delicious meals each day, with most of the culinary ingredients sourced from the lodge’s farm and vegetable garden. The farm is home to cows, goats, chickens and pigs, and Lewa Wilderness even make their own goats cheese. Wake up to freshly prepared fruit, cereals, and a cooked breakfast before embarking on your first activity of the day. Guests will return to a buffet lunch, before enjoying a mouth-watering three-course meal in the evening. Finish off your day with an indulgent dessert and a refreshing beverage from the bar.

Embark on an exciting game drive across the Lewa Wildlife Conservancy, in a specially-designed open safari vehicle, and view amazing creatures including the Big 5. Lewa’s incredible guides will be able to teach you fascinating facts about the animals that live within the conservancy, including the endangered black rhinos and Grevy zebras. Guests will be able to see herds of giraffe, elephants, wildebeest, buffalo and elands, as well as the conservancy’s prowling predators. Game drives can be tailored to your interests, and the guides will do their best to help you find the creatures that interest you the most.

Night drives are also available, allowing guests to find some of the conservancy’s nocturnal species that don’t come out during the day. Search through the gloom with a spotlight, or venture out under the light of a full moon, and look for bushbabies and aardwolves. Guests may even catch sight of the conservancy’s leopards, which are most active once the sun goes down.

Explore the conservancy with a Maasai walking guide and learn about the wilderness from someone who has lived there their entire life. Wander around at a pace that allows you to take in the smaller details and immerse yourself in the beautiful landscape. Your guide will teach you how to recognise tracks, and follow clues in the bush that will lead you to exciting wildlife viewings. Guided walks take place either in the early morning or early evening, when temperatures are at their most comfortable and the wildlife is most active.

Lewa Wilderness’ stables are home to over thirty horses and ponies which are trained to be able to carry riders with a range of experience. Explore the wilderness on an old-fashioned horse safari and step into the shoes of classic explorers. Speed across the open plains, kicking dust up in your wake and look out for amazing game sightings.

Flights over the Wilderness

Observe the wilderness from a completely unique perspective in an open-cockpit biplane, and see giant elephants and towering giraffe from a bird’s eye view. The WACO YMF-5 will be parked just a short drive from the camp. Guests will get the chance to soar over the plains, above treetops and down gorges with Lewa Wilderness’s owner and pilot, Will Craig.

Embark out on a camel safari and explore the bush for as long as you want. Guests can choose to go out for a few hours or even a few days, and experience the vast landscape. Make the most of your time by camping out on the plains and enjoy guided walks while the Maasai guides transport the camp with the help of the camels.

Visit the lodge’s farm or ‘Shamba’, and see where the fresh fruit and vegetables served at the lodge come from. Guests can meet the resident chickens, pigs, cows and goats and even enjoy a relaxing picnic under the shade of the mango trees.

Travel to the Ngare Ndare Forest and journey across the 40-foot high canopy walkway. The bridge is constructed out of wire mesh and cables, giving guests an incredible view of the forest below as you travel beside tree canopies. The walkway ends at a beautiful viewing point where visitors can gaze down at the river and watch the elephants and buffalos as they drink and play by the waterside.

The Ngare Ndare Forest is also home to a selection of beautiful waterfalls, where guests can enjoy the peaceful surroundings and even take a dive into the cooling waters. Relax beside the falling water, surrounded by trees that have stood there for 200 years, and listen to the gentle birdsongs.

Spend a day visiting the local Il Ngwesi Maasai community and learn about local traditional culture. Guests will be able to meet the amazing people who live alongside the conservancy and learn about life in the Maasai Mara.

Guests are also invited to visit the people who work with the Lewa Crafts Funiture and Kifuma Weaving project. These people have been able to find employment due to the opportunities provided by Lewa Wilderness, and also created the handmade furniture and rugs that furnishes the lodges.

Lewa Wilderness also supports Pepo la Tumaini, an HIV/AIDS orphanage, clinic and senior school based in Isiolo. Visit the school, meet the children who study there, and gain an insight into how tourism benefits the local community.

Enjoy a picnic under the shade of the riverine trees, and spend an afternoon beside the beautiful waterfall, which is located just a 10-minute walk from the lodge. Jump into the pools and escape the heat by swimming in the refreshing waters.

To give back to the community that supports the Lewa Wildlife Conservancy, Lewa Wilderness aids a number of initiatives that benefit the local people.

‘The success of the Conservancy is very much due to the Lewa family understanding that wildlife conservation cannot succeed without support from neighbouring communities. There are a number of initiatives such as micro-credit schemes, water projects, and education and healthcare projects that the LWC is involved with to aid community development.’

One of these projects is the Lewa Education Programme (LEP) which helps local children to receive an education and teaches about the importance of wildlife. The LEP sponsors 18 schools and offers internships at Lewa Wilderness, where children can learn about tourism and forging a career in this industry. Teaching future generations about working in tourism also passes on the importance of wildlife and why it must be conserved.

‘We have trained many people from our community who have gone on to get wonderful jobs in the Tourism industry around Kenya which we are very proud of.’

Lewa Wilderness provides training for local people so that they are able to craft furniture and weave rugs. These furnishings have been used throughout the lodge and are also on sale at Lewa Wilderness’ gift shop. By passing these skills onto local community members, these people are able to gain employment and provide an income for their families.

By staying at Lewa Wilderness, guests are automatically supporting the Lewa Wildlife Conservancy, which provides a protected habitat for a wide range of animals, including endangered species such as black rhino and Grevy zebra. The Craig family set up the Ngare Sergoi Rhino Sanctuary in the 1980s, and began to translocate and monitor rhinos in order to protect them from poachers who persecute them for their horns. Today the Lewa Wildlife Conservancy is home to 169 black rhinos, and is still helping their populations to recover.

Conservation measures and rangers also help to protect Grevy zebras, the most threatened species of zebra which came to the conservancy of their own accord, and elephants from poachers who have greatly reduced their numbers.

Children of all ages are welcome at Lewa Wilderness