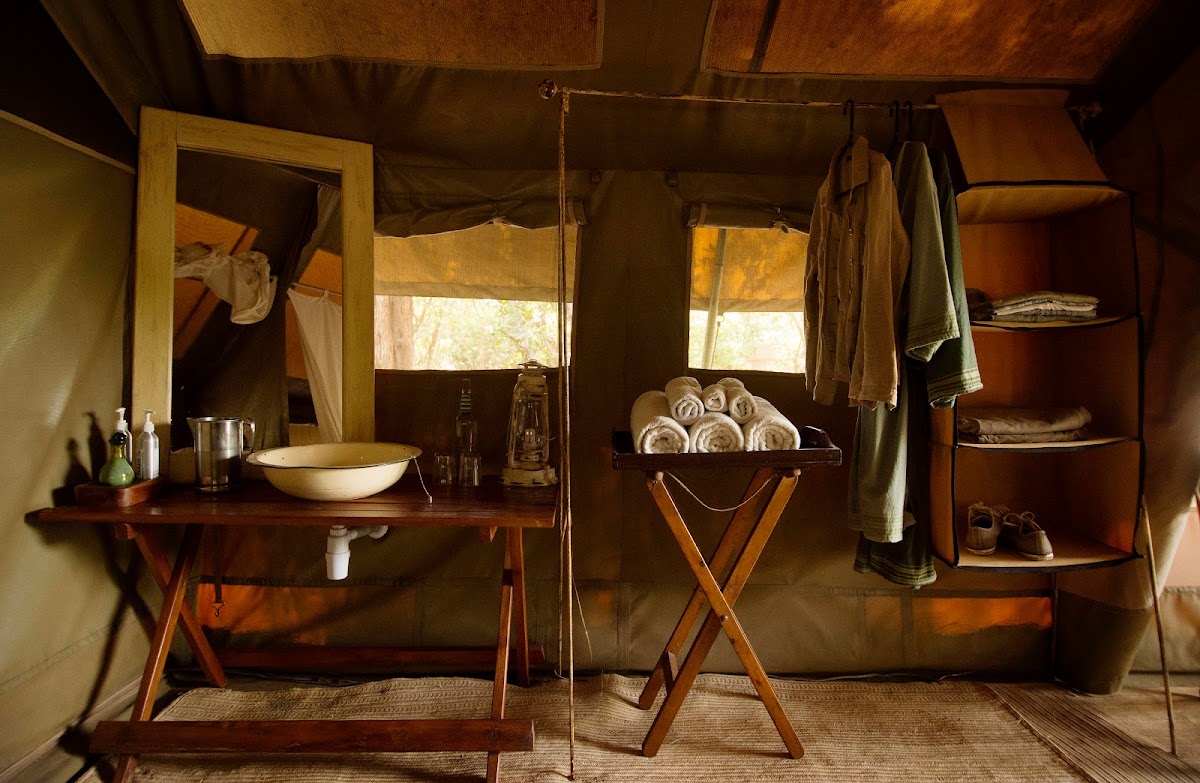 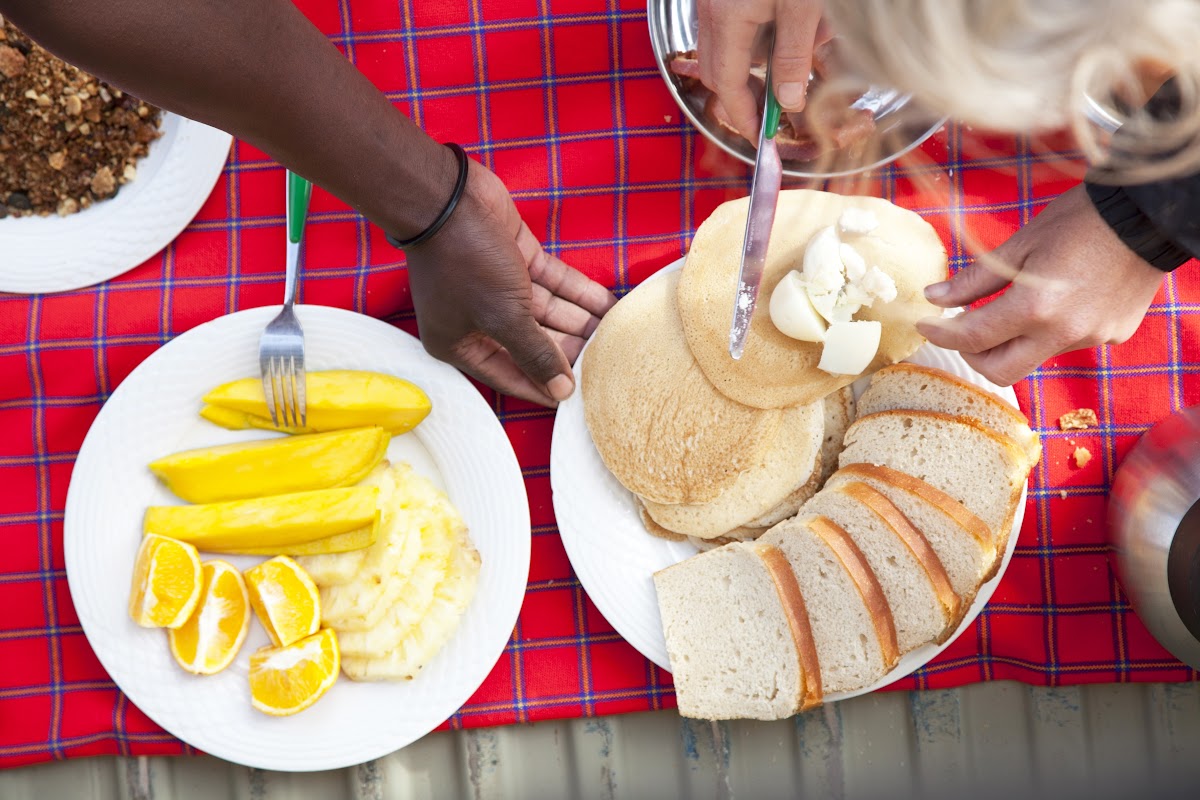 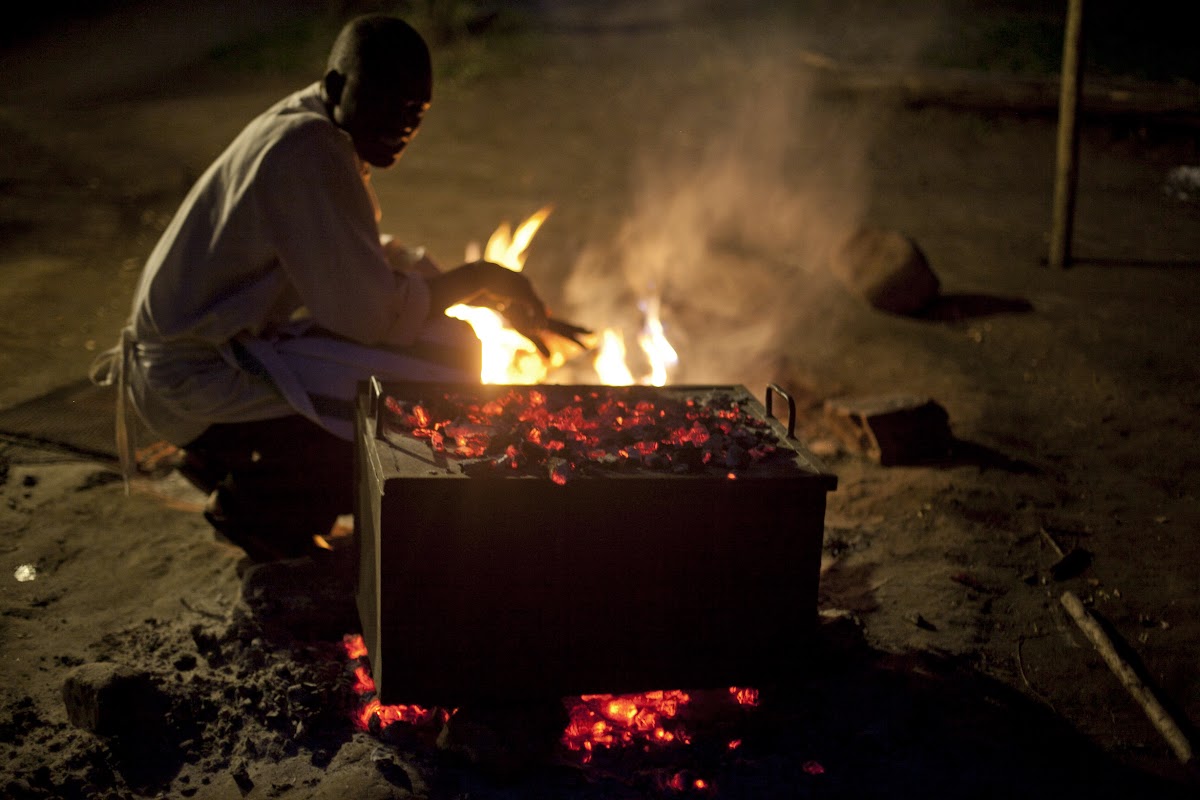 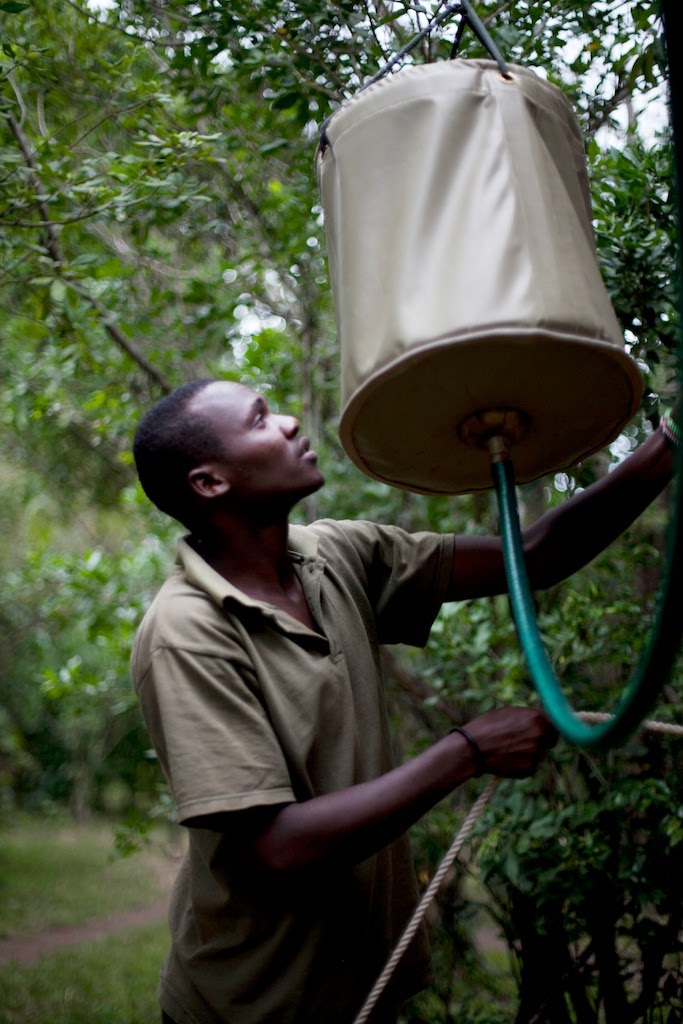 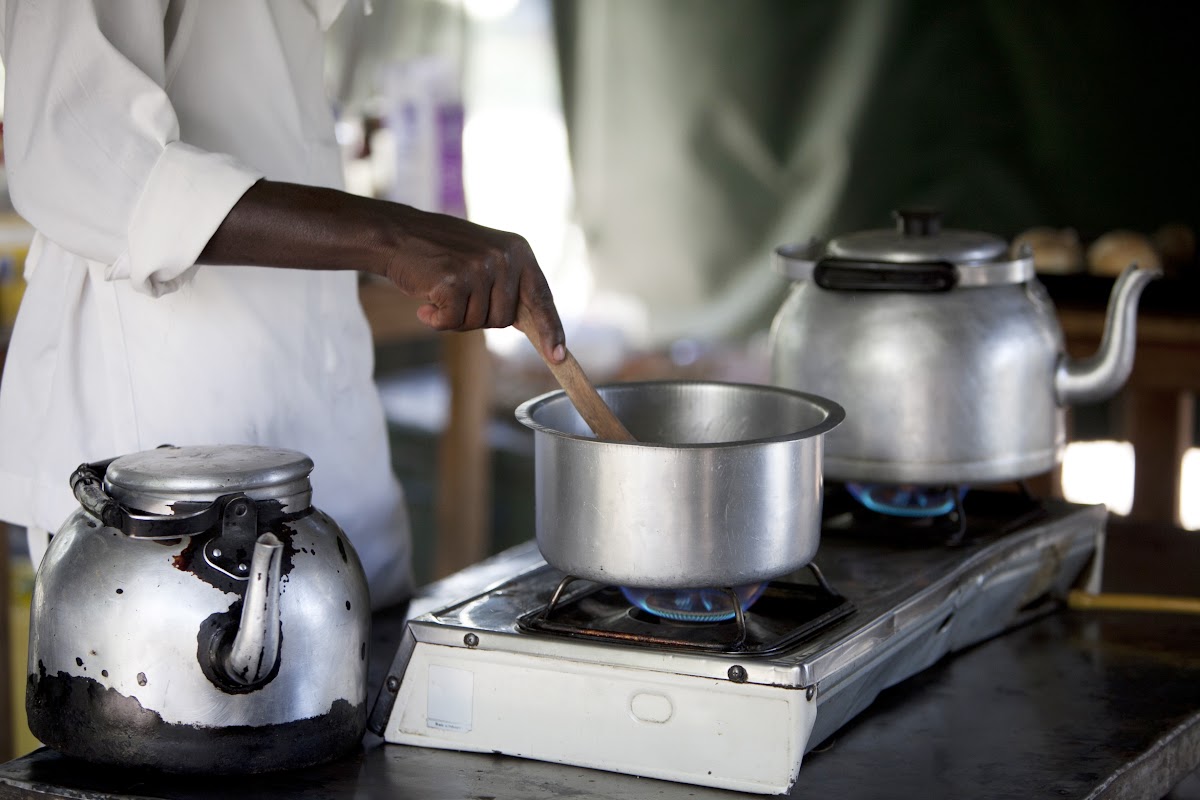 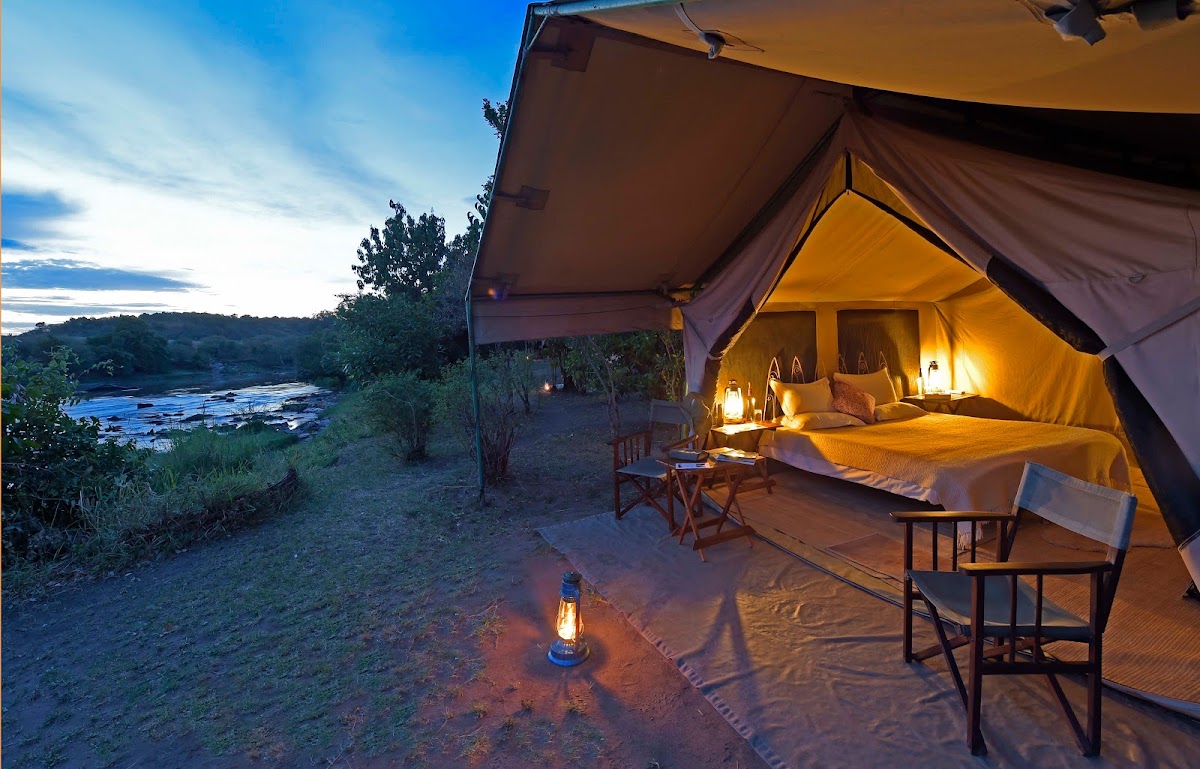 Nkorombo is Serian’s most rustic and peaceful tented camp, set on an private stretch of the Mara River in the North Mara Conservancy. Tucked away in the shelter of the trees, you’ll find the perfect little hideaway where you can reconnect with nature and discover a newfound appreciation for the simpler delights of life on safari. Designed to seamlessly blend into its surroundings, the camp is made up of just 5  traditional safari tents that promise an exclusive and authentic adventure. Despite its low elevation, Nkorombo has gorgeous sweeping views of the river and the golden plains beyond, as well as the vibrant populations of animals that reside close by.

Serian’s Nkorombo sits on the banks of the Mara River within the North Mara Conservancy, which was established in 2009 and is the largest conservancy in the Maasai Mara National Reserve. Nearby, there is a salt lick that often attracts black rhinos and predators, and one of the river’s crossing points used by herds during the annual Great Migration. To reach the camp, guests will usually fly to the Musiara Airstrip, which is about a 45 minute drive away.

Nkorombo is a part of Alex Walker’s Serian, a collection of exclusive safari camps stretching both sides of the border between Kenya and Tanzania. The word ‘serian’ comes from the Maasai language, meaning ‘serene’, ‘calm’ or ‘tranquil’, perfectly fitting for the outlook of Alex Walker’s Serian. Staying at a camp like Nkorombo is about disconnecting as much as it is about reconnecting – it’s about immersing in a purer, simpler world that still belongs entirely to nature.

Nkorombo is open all year and there’s always a fantastic reason to come and stay. November and December are generally much quieter after the Great Migration has made its way south again, and much of the tourism has gone with it. However this doesn’t mean that wildlife is in short supply and those visiting at this time will get to have a more laid-back safari experience. January-March tend to be the hottest months in Kenya, ideal if you’re looking for a little dose of warmth, and it’s during this time that many animals give birth to their young so there’ll be cubs and calves aplenty! During the later spring months the natural world is in full flourish and when lots of elephants are passing through the conservancy.

The Great Migration begins in July and lasts through until October, with tens of thousands of herd animals crossing the Mara River from Tanzania to Kenya and joining the already ample populations of wildlife. August, especially, is usually very busy but the exclusivity of the North Mara Conservancy means Nkorombo stays nice and quiet. These cooler, drier months are also great for Big Cat sightings. This is when the Maasai Mara is in full swing!

Nkorombo certainly has more of a traditional selection of tents than its sister camps, calling back to a time when safari camps were less permanent and designed to be a fixture of the natural environment. Picture canvas, bucket showers, leather and weathered wood. Each of the 5 tents is aptly fitted out with simple, down-to-earth furnishings and en suite bathrooms, complete with flushing loos and rustic wash basins. Beds are fitted with mosquito nets, and gauzed windows and fans will keep the whole tent nice and cool.

Serian’s Nkorombo caters all meals for its guests but their dinners are what they are known for. They believe wholeheartedly in preserving that ancestral tradition of coming together around the fire and eating together, of relishing in our social natures and innate capacity to share. This is the time for re-telling the day’s excursions to your fellow adventurers and winding down for the peaceful night ahead.

The essence of the safari experience at Serian’s Nkorombo is game drives. Each group has their very own dedicated guide and spotter, and their own open-top safari Land cruiser, ideal for wildlife photography. Nkorombo’s guides know these areas like the backs of their hands – they know all those special places to visit, where the animals like to go and what they like to do depending on the season, and all about the habitats that maintain it all. You’ll have total flexibility and freedom to make the most out of your stay. Whether it’s a full day drive with picnics or an adventure that gets you back in time for sundowners by the fire before dinner, you get to go wherever the day takes you!

The MPCP is an organisation that works to protect the predator populations of the Greater Maasai Mara ecosystem, with central focus on the 3 main predators of the region – the lion, the cheetah, and the leopard. It is their aim to help those in the surrounding communities understand the value and role of these predators in the ecosystem and to support healthy, safe populations of Kenya’s feline residents. Alex Walker’s Serian is able to arrange amazing photography/survey safaris with Niels Mogensen, Senior Programme Scientist the MPCP, and award-winning photographer, Trai Anfield, and all proceeds then go straight to the MPCP.

Alex Walker’s Serian helped to launch the Mara Predator Project, an initiative to protect lion populations, and the Serian Camp was the base of the Project for 3 years. From this prime location, the MPP was able to conduct research and collect data on lions in the area to help inform their strategies for the conservation of lion prides.

The Mara North Conservancy (MNC) has one of the lowest densities of tourism and vehicles in the Maasai Mara, and accommodates just 12 camps, which are all managed in a sustainable way that benefits the surrounding communities and natural habitats. Numbers of beds/tents and safari vehicles are limited to a fixed amount of land, i.e. 1 tent per 700 acres of land. This ensures that tourism and pollution stay at a minimal level but also offer a highly exclusive safari experience for those staying in the MNC.

In the 80s and 90s, the expansion of land fragmentation began to lead to the ‘environmental degradation of the Maasai Mara ecosystem’. A partnership between the Maasai landowners and the private tourism sector was hugely important for creating a mutually beneficial system that ensured sustainable and effective wildlife conservation and stability in local communities. In 2008, the founding members of the Mara North Conservancy began working with local Maasai landowners to begin developing this system and 750 landowners leased their land to the MNC, which was officially established in 2009. The camps within the MNC pay the landowners a fixed rate each month for the privileges of carrying out safari drives within the area.

Solar energy is the main source of power for the Alex Walker Serian camps and their facilities. This has a really beneficial impact on the environment because solar energy is the most efficient renewable energy source, reduces air pollution in replacing fossil fuels and it doesn’t require water to make energy. Reliance on solar power also prevents use of non-eco-friendly appliances such as washing machines, air conditioning units and microwaves.