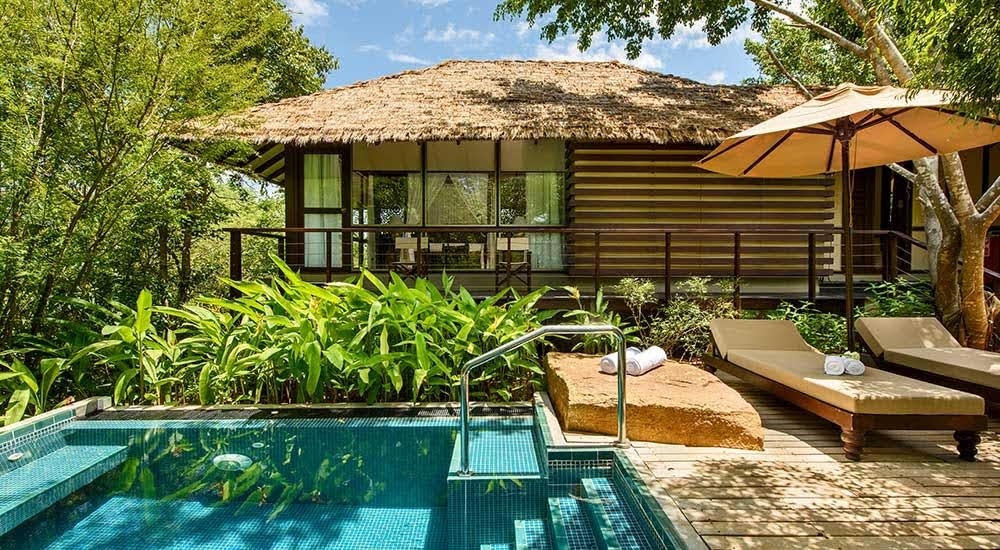 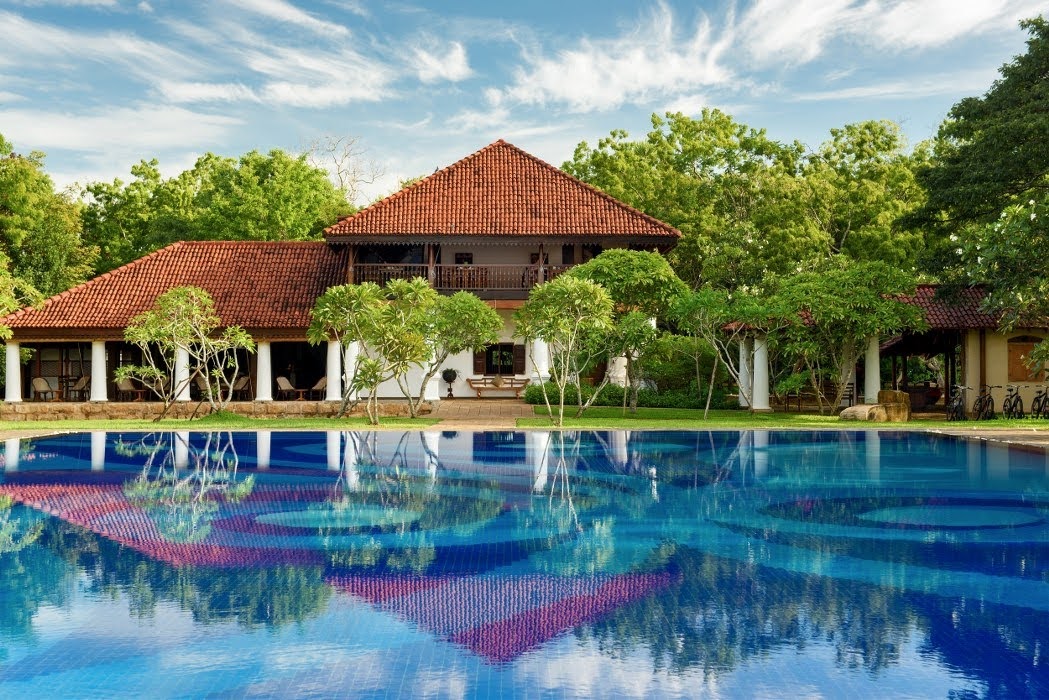 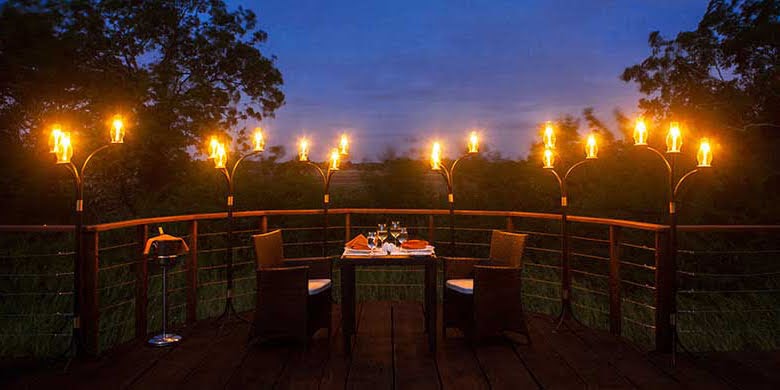 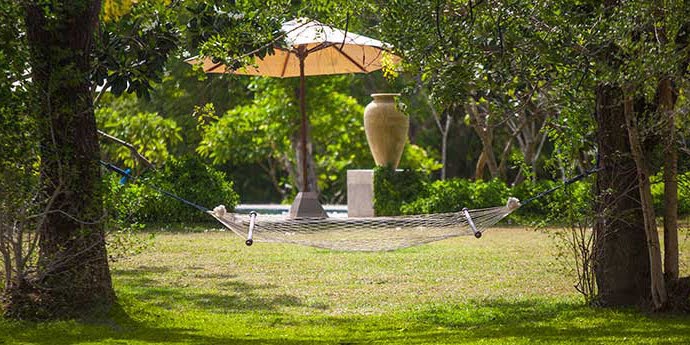 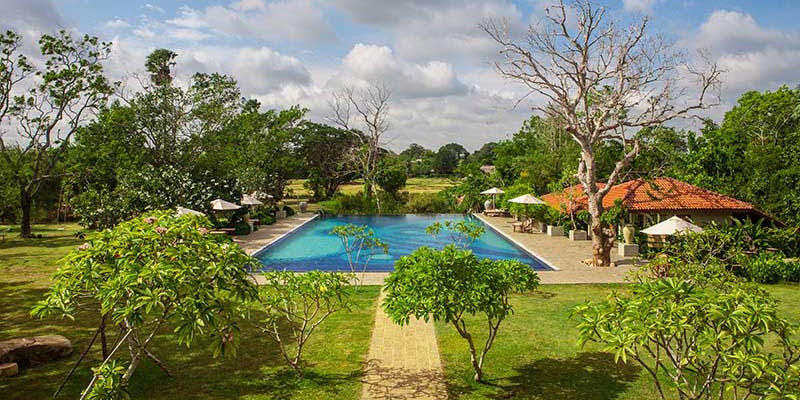 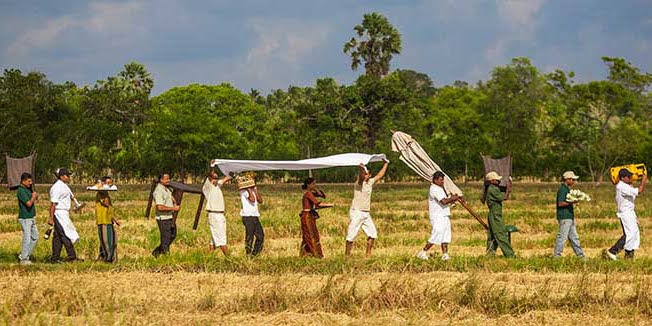 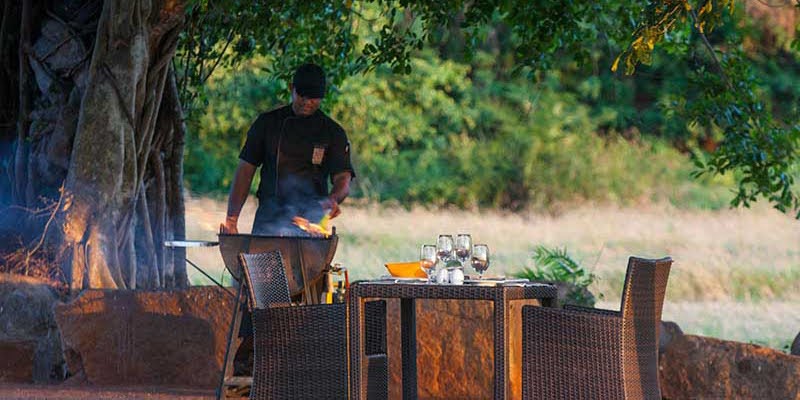 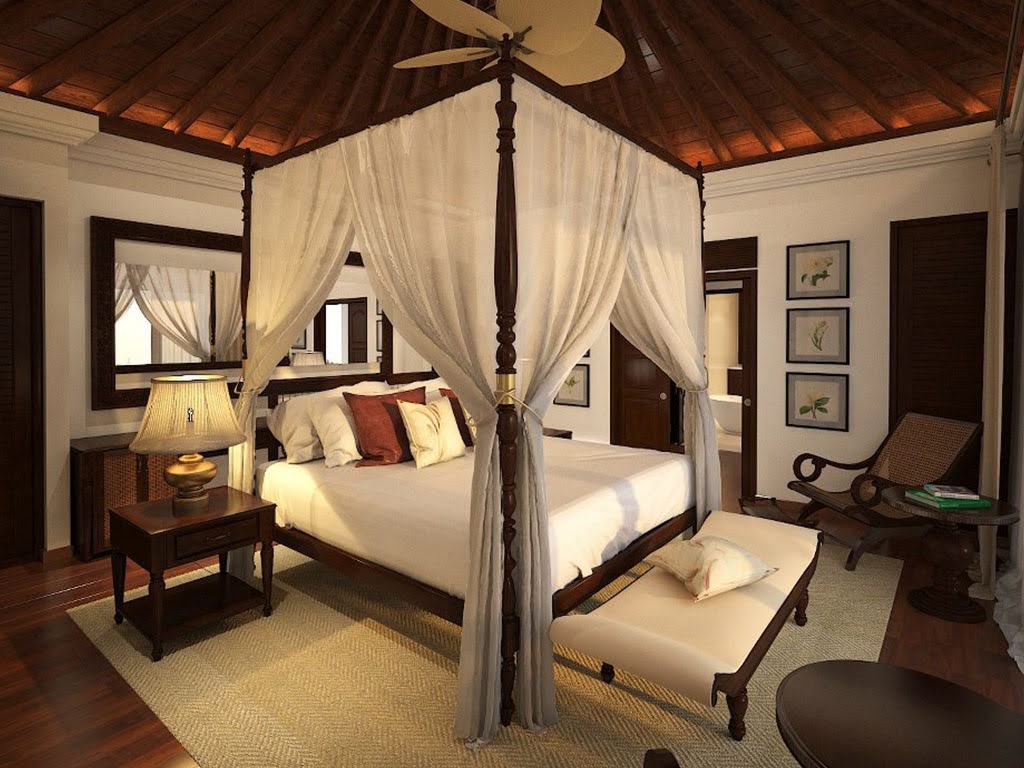 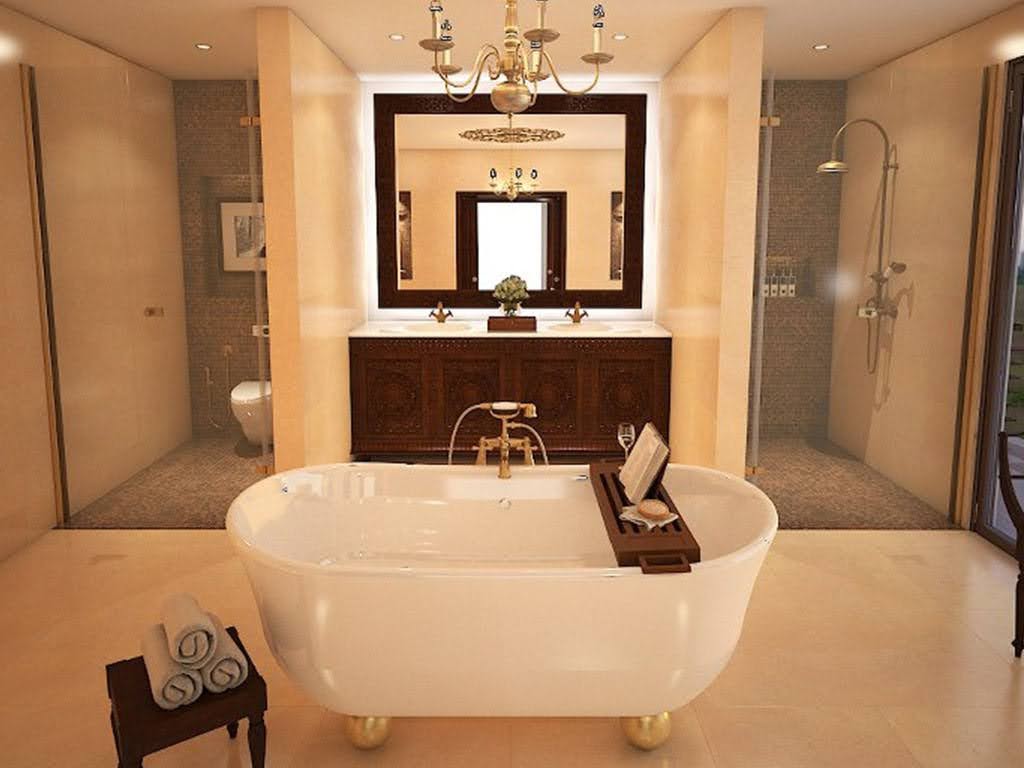 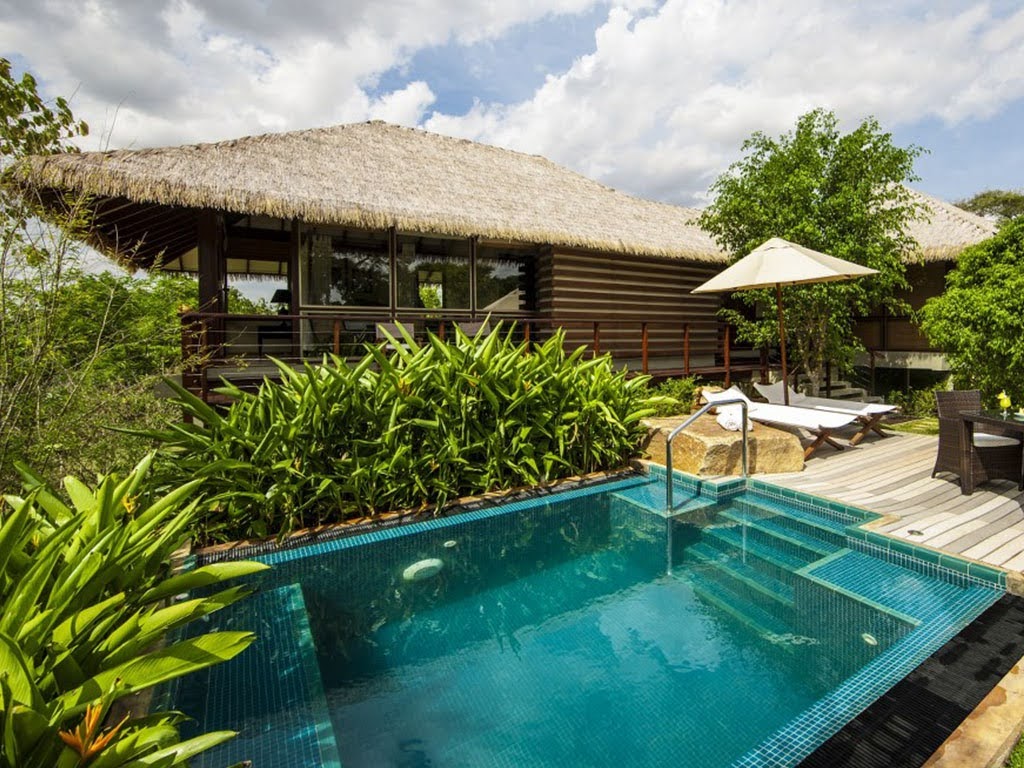 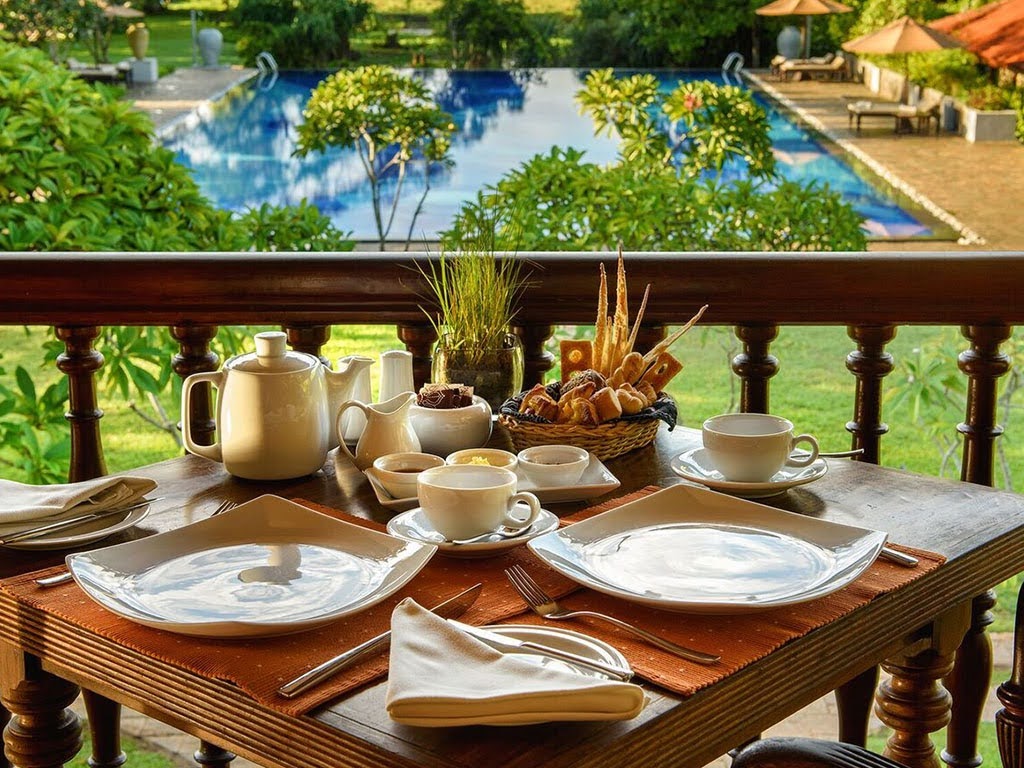 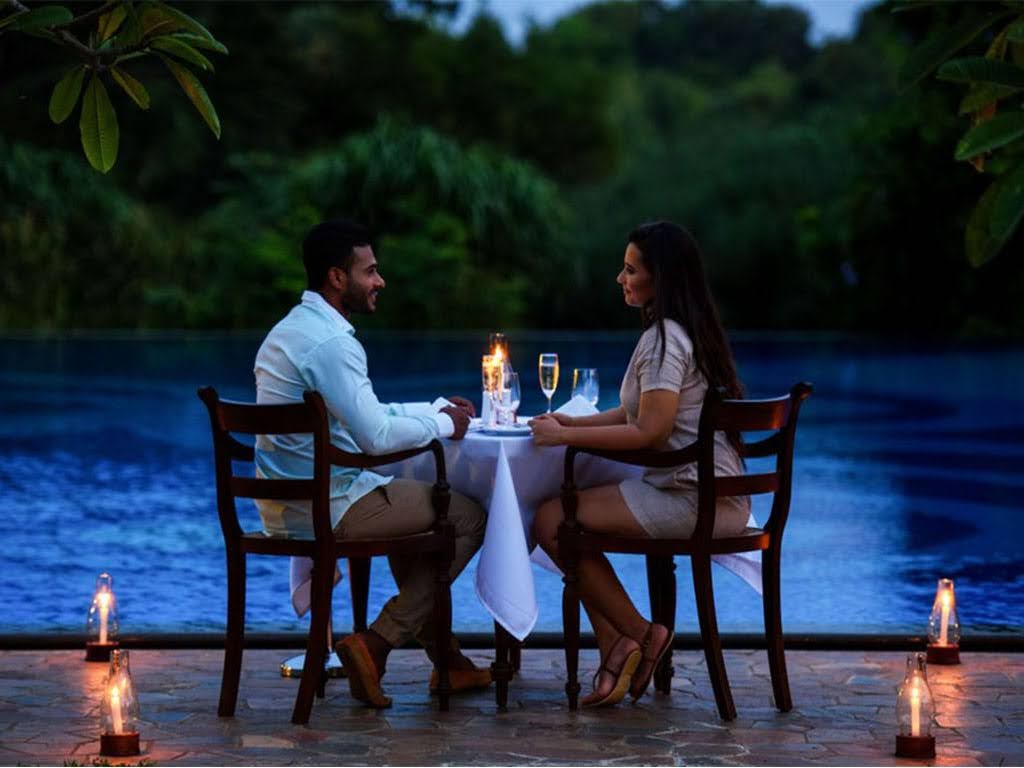 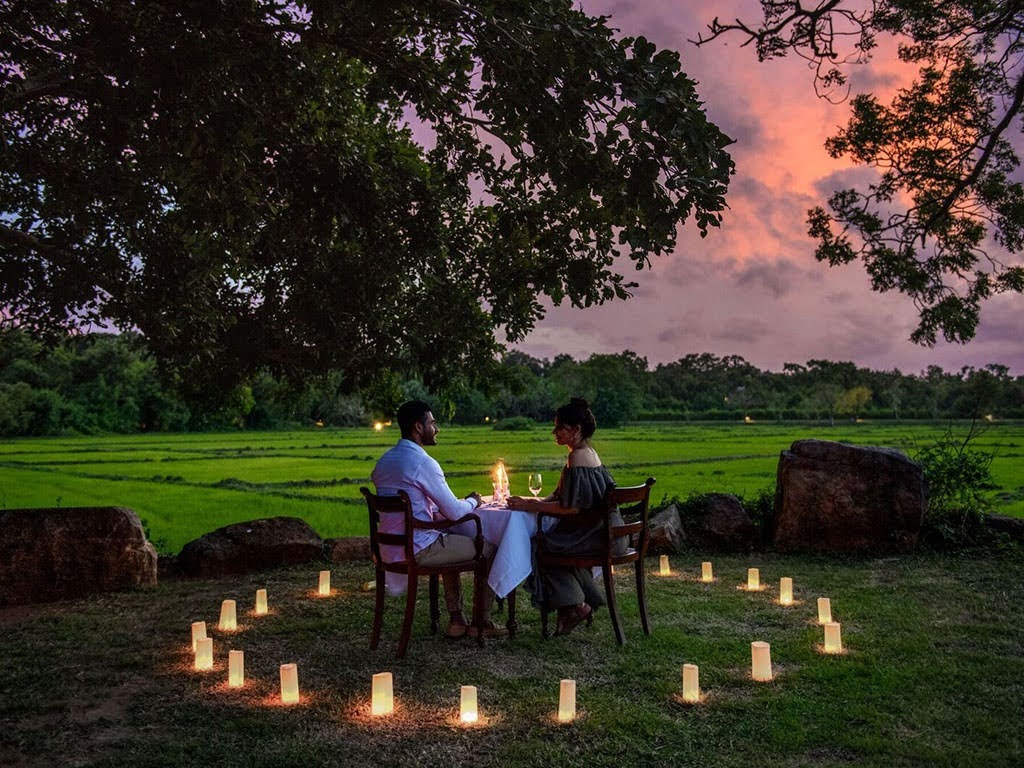 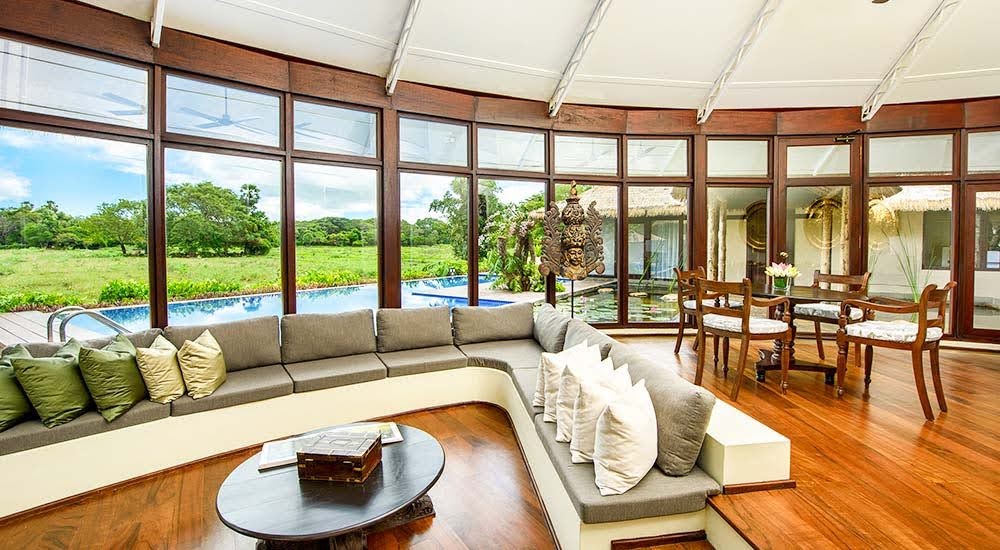 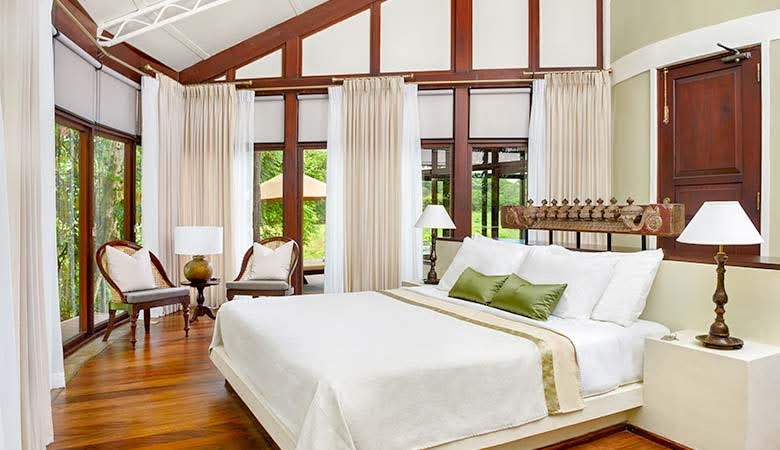 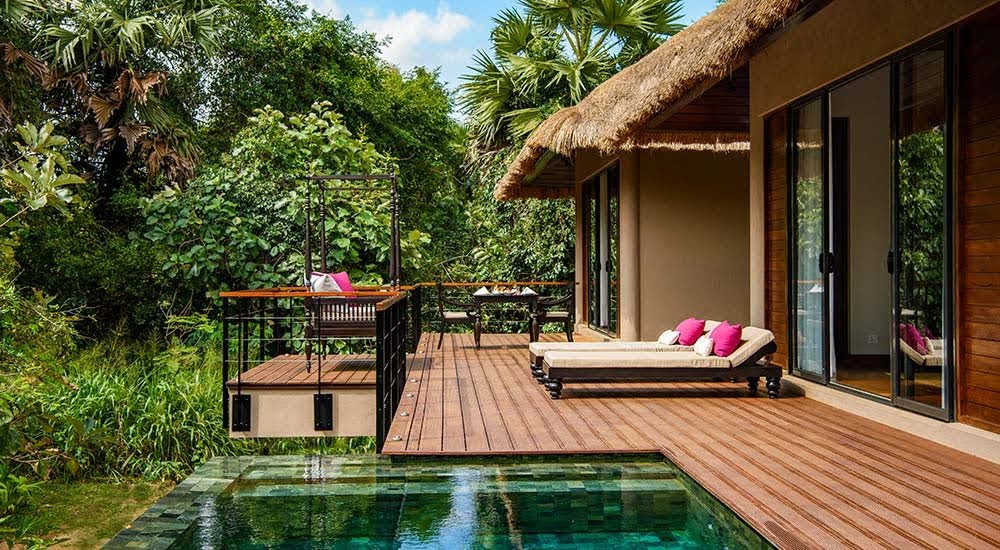 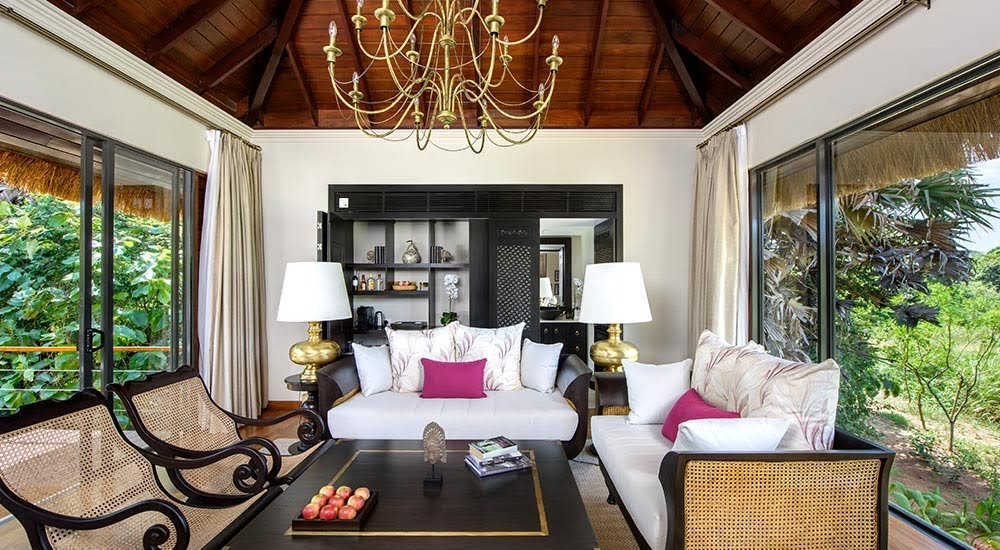 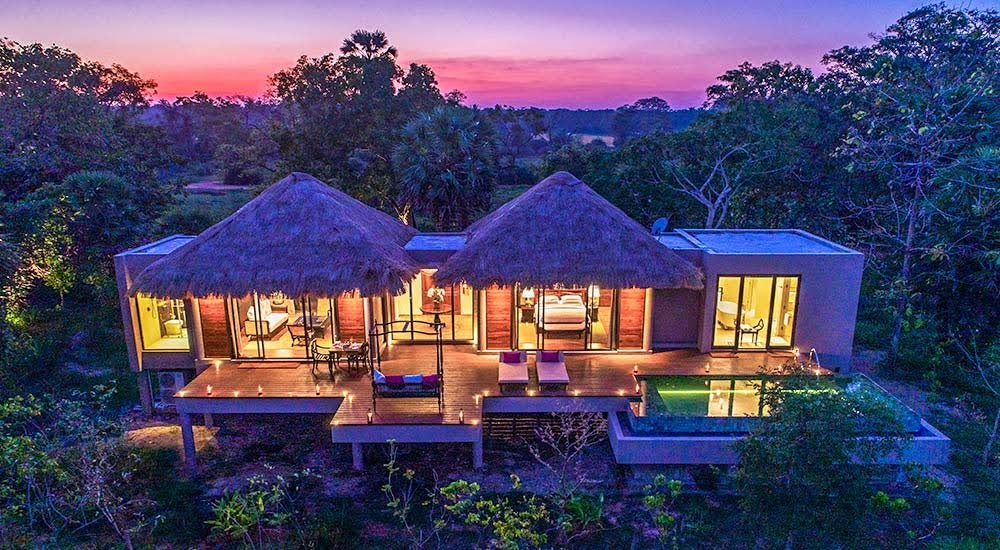 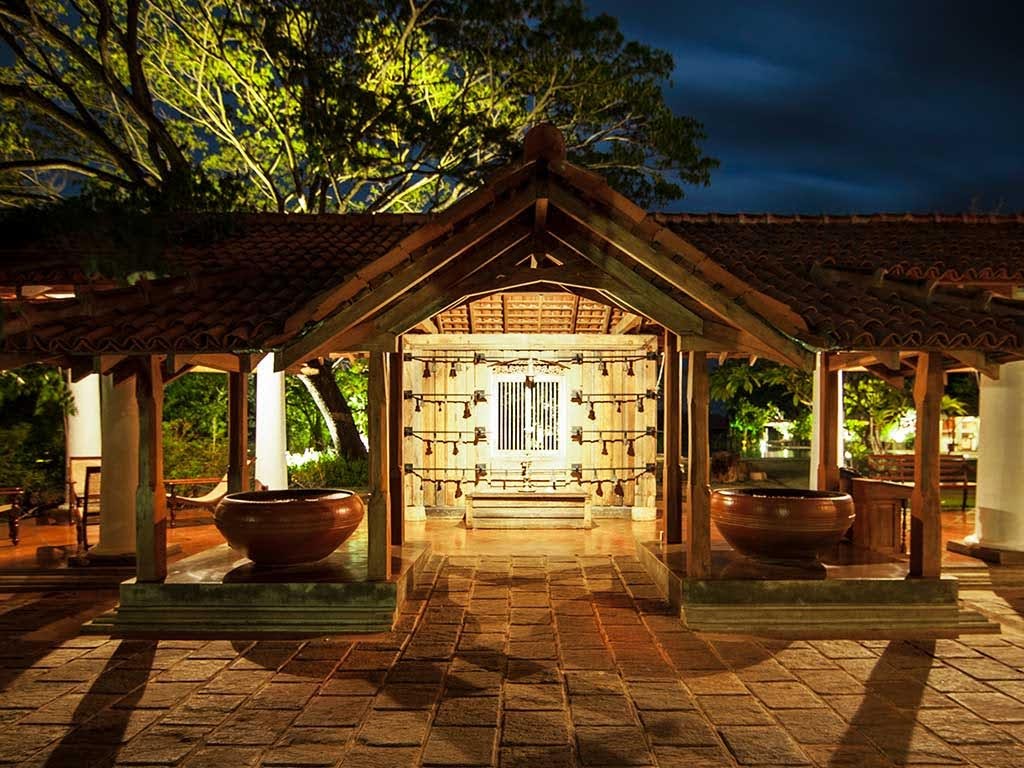 This boutique resort with a touch of traditional elegance and aristocracy offers you a unique experience of luxury amidst a natural, remote, and uninhabited environment. A gem amongst the Anuradhapura hotels, Uga Ulagalla is nestled in a sprawling 58-acre lush green garden with a 150-year-old mansion at its centre, the resort is rich with cultural heritage and historical significance. Interposed within this natural habitat, there are 25 villas with private pools, cautiously designed and built to maintain the ecological balance of the surroundings. If you cherish adventure or value visiting majestic archaeological sites, Uga Ulagalla is the place to stay – this is after all the land where great Kings once reigned. With plenty of activities and Sri Lankan experiences on offer, whether it be a romantic get-away or family retreat, the resort hosts a magical place for you and our loved ones.

Ulagalla is situated in the ancient kingdom of Anuradhapura, right in the centre of the Cultural Triangle and birthplace of Buddhism in Sri Lanka. Hidden away in the quiet village of Thirappane, this luxurious resort features a sprawling 58-acre estate nestled among two sparkling reservoirs, lush green paddy fields, and ponds sprinkled with lilies. The Resort is located a 30-minute drive to the archaeological sites in Anuradhapura, and an hour away from the great rock fortress of Sigiriya, now a UNESCO World Heritage site. The closest airport to Uga Ulagalla is the Anuradhapura Domestic Airport (25km from Uga Ulagalla), approximately a 30-minute drive.

The District of Anuradhapura in the North-Central Province is blessed with warm sunshine almost throughout the whole year, though April is the warmest month. Cooler climes can be experienced from November to January. The southwest monsoon holds sway from April to October, transforming the landscape and providing a whole new perspective to the surroundings. The weather at the Anuradhapura luxury resort is otherwise warm throughout most of the year.

Surrounded by local fresh produce, this location is perfect for an nature-loving foodie. Uga Ulagalla offers a guided tour of Sri Lankan organic farming and the organic herb and vegetable gardens, during which you can pick fresh, juicy fruits and vegetables for your lunch. To end your tour you will visit the resorts traditional healthy kitchen, where the herbs and vegetables you’ve selected will be transformed into delicious Sri Lankan dishes especially for you

This exquisitely and elegantly furnished 1800 sq. ft Pool Villa is ideal for a truly comfortable, luxurious, and memorable holiday. The Villa provides two bedrooms and two large bathrooms, a private pool, and living and dining areas. Its 180-degree glass wall gives the occupants a picturesque view of a 17-acre paddy field. The full-length pool links the manmade villa with the abundant beauty of nature with delicate intricacy, making it one of the most unique resorts in Anuradhapura.

The Pool Villas at Uga Ulagalla are over 850 square feet: fitting for a cosy and private holiday for a small family unit. The glass wall offers an unobstructed, panoramic view of the scenic, unspoiled, natural glory of the surrounding of these villas in Anuradhapura. Within the villa you’ll find pure luxury and comfort, equipped with air conditioning, high-end entertainment systems, and modern amenities. All villas of the hotel have their own sun deck and secluded private plunge pool, making it a unique and unparalleled destination.

A haven of intimate luxury and comfort, in a setting infused with the serenity of being close to nature, these stunning Deluxe Pool Villas at Uga Ulagalla boast 2,100 sq. feet of splendour. Step through the foyer into the comfort of a spacious bedroom, augmented by a dressing space and an elegant bathroom with a shower and bathtub, to suit your preference. The ample living room is only seconds from the stunning 700-sqft outdoor deck which features day beds, as well as a second bathroom, dining space, and of course the pièce de résistance – the plunge pool. This idyllic getaway is perfect for couples while it is also family friendly; so you can bring the kids along.

You haven’t tasted Sri Lanka until you experience an authentic “Kamatha” meal –  This restaurant is a rice paddy dining pavilion serving revered royal recipes from a Kingdom long forgotten. Set in the centre of a working paddy field, Kamatha brings together travellers and locals who have an appetite for exploring flavours. These thoughtful multi-course meals incorporate vegetables harvested at Uga Ulagalla’s organic farm, lake fish and free-range meats sourced locally, along with traditional breads and old-world rice, the signature crop of Uga Ulagalla’s paddy fields.

On this epicurean adventure you will sample traditional dishes, explore old-world ingredients, and even have the chance to work with the home cooks and their favourite recipes. You will learn how the traditions of a Kingdom are reflected in the myriad of fragrant spices and seasonings, about the utensils still in use after 2000 years and of the preparation of food in hand made clay pots and open wood fires.

At Liyawela restaurant, your dining experience will be undoubtedly unforgettable, with traditional furnishing, emphasised by the multiple shades of brown, brings out the characteristic dry zone atmosphere. This cosy dining venue offers you the best of Sri Lankan, Eastern and Western cuisine as well as fusion fare. The restaurant’s upper deck provides a captivating view of the lush green vegetation that surrounds the resort. Savour and relish a delicious meal unlike any other, in the soothing cool breeze at Liyawela.

Deep within the lush green vegetation, Uga Ulagalla offers an exclusive dining experience to its guests who desire privacy. Imagine a table set for two in the middle of a peaceful threshing ground of a paddy field, offering the perfect ambience to savour the authentic flavours of Sri Lankan cuisine, or even experience a sumptuous barbecue meal. If your preference is a romantic candlelit dinner, then the observation deck at Uga Ulagalla provides the perfect setting. For a truly intimate experience you may dine under the stars, at your private terrace or by the tranquil poolside. Why settle for anything less when you can experience the best!

The walls of this luxurious spa at Uga Ulagalla are built with wattle and concealed by lush foliage. Hidden to all but the ones who seek it; the luxury spa is one of the best in Anuradhapura, offering wonderfully indulgent pampering. The spa is built to resemble an underground cavern of perfect equanimity, that isn’t only unique in appearance but also offers an experience that is inimitable –from a simple massage, to signature treatments to rejuvenate you from your crown to your toes.

Uga Ulagalla’s expert spa therapists are recognised as some of the best in Sri Lanka with international expertise and training. All of the spa treatments and products are of exceptional quality and conform to international standards; you can rest assured that you are in the safest hands when you step into the spa at Uga Ulagalla.

Towering above the landscape, seemingly lost in time, the Abhayagiri Monastery and Dagaba offers a unique insight into the time when kings ruled the land. Just a 30-minute drive from Uga Ulagalla, you can reach the Abhayagiri Monastery and Dagaba in Anuradhapura, which was established by King Vattagamini Abhaya, during the first century BC. He chose this site on his triumphant return after having had to flee from invaders. It is said that over 5,000 monks dwelled there as it became a place of meditation and learning.

Whilst there you may also observe the stunning statue of Lord Buddha seated under a Bo tree, a cave temple, a pond cut from stone, and ancient moonstones carved from the rock at this sacred site. Amongst the other attractions in Anuradhapura, you can also visit the nearby Abhayagiri Museum where ancient jewellery, artefacts, and pottery are displayed.

The Sigiriya Rock on the horizon always captivates the gaze of the onlooker. Considered to be the eighth wonder of the world, the fortress on a 600-foot rock is a result of an altercation that took place between two heirs to the throne in the 5th Century. Prince Kasyapa took over the throne by brutally killing his own father King Datusena. He then constructed this architectural and engineering marvel, complete with flourishing irrigation systems, in order to seek refuge from his brother Prince Mogallana, who wished to exact his revenge.

On this tour you will be able to picture the ancient city come to life as you hike past its moats and water fountains, that still function to this day. You will also walk through the entrance to what once was Kasyapa’s palace, via the lion paws that it is famed for. The best time to experience this tour is in the morning, from 7.00 am, the duration will be 5/6 hours depending on the guest.

Discover the humble simplicity of Sri Lankan village life with this two-hour guided bicycle excursion. Keep an eye open for exotic birds and small wildlife along the route and expect surprises on one of the best Sri Lankan bike tours. Your destination is Veheragalla, a traditional farming village not far from the hotel. You’ll meet the residents and be welcomed at the home of the village headman. On your return journey, savour the tranquillity of the local ‘meditation rock’, where Buddhist monks and villagers gather for spiritual practice on full moon nights. The best times to go on the excursion are either 7 am or 3 pm, the duration of the tour is 2 hours and you’ll be cycling 6km on the flat.

“Ulagalla uses innovative technology and best practices in sustainability by the use of organic farming, reverse osmosis water management and solar farms which contributes largely to keep the carbon foot print of the resort to a bare minimum.”