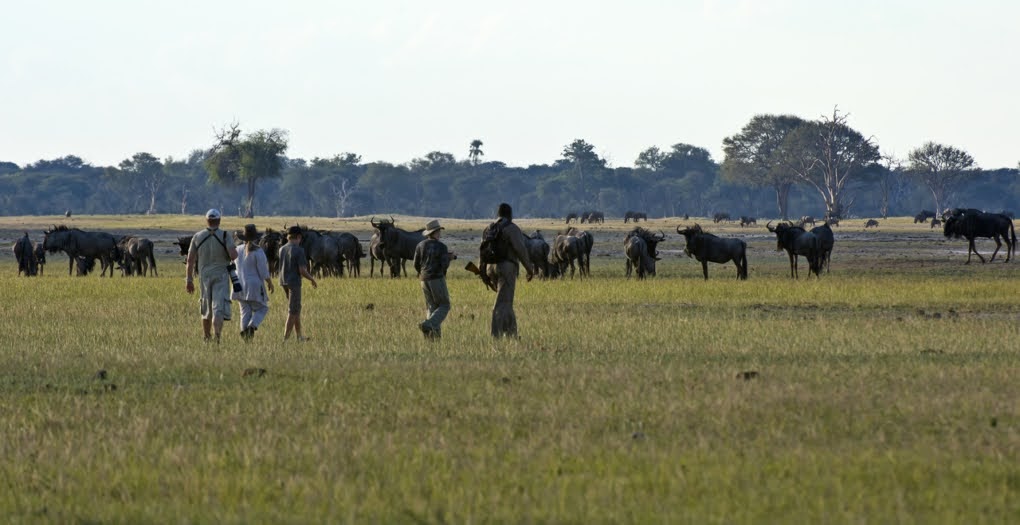 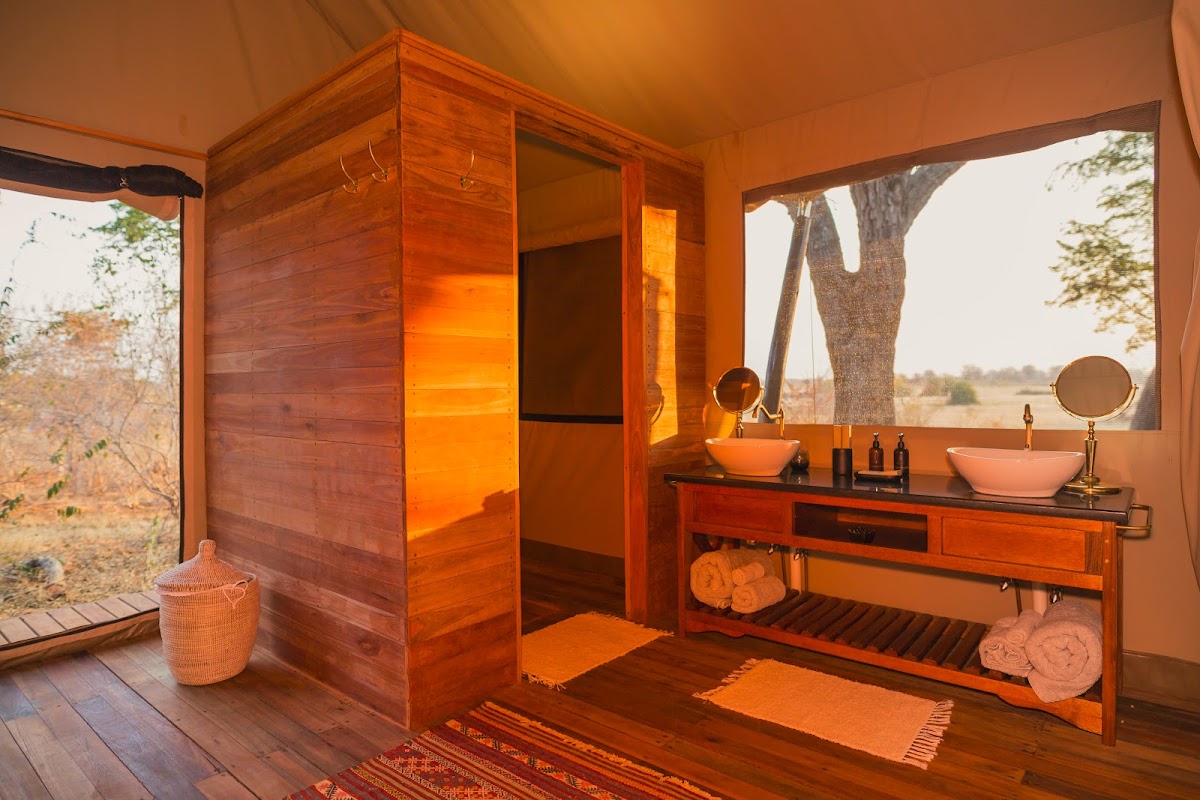 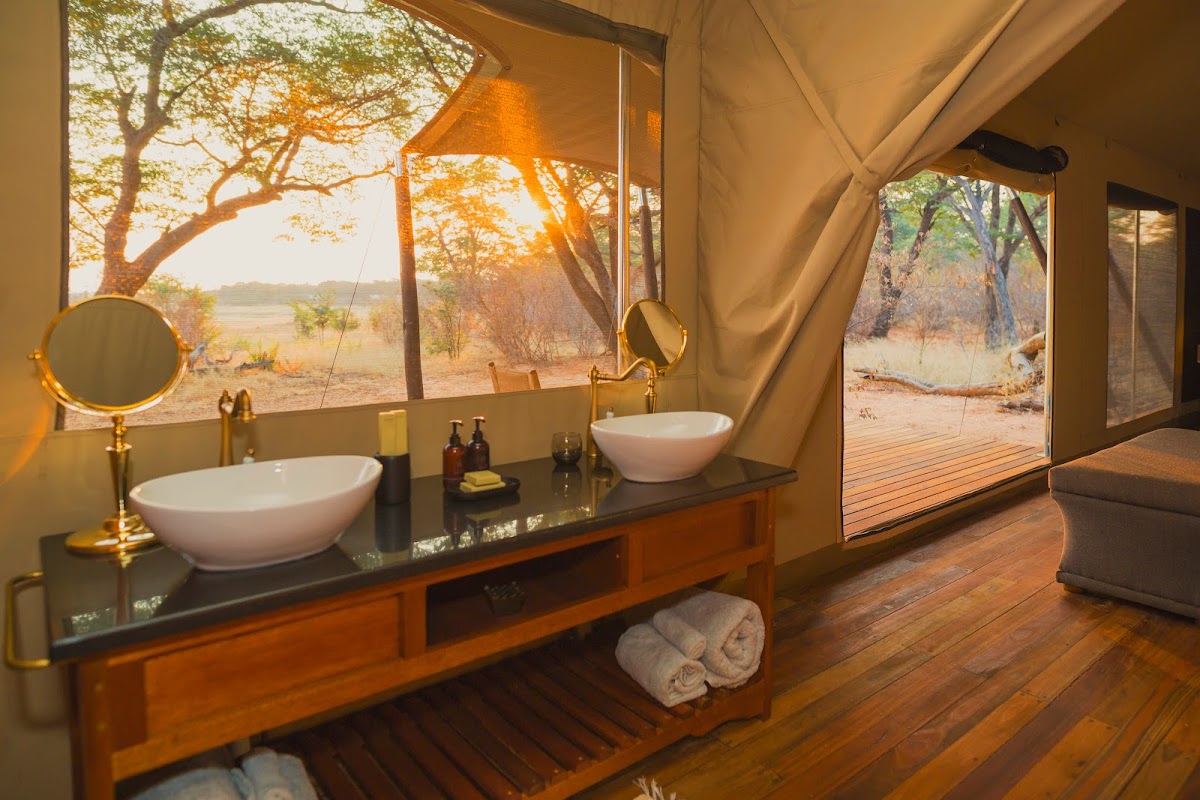 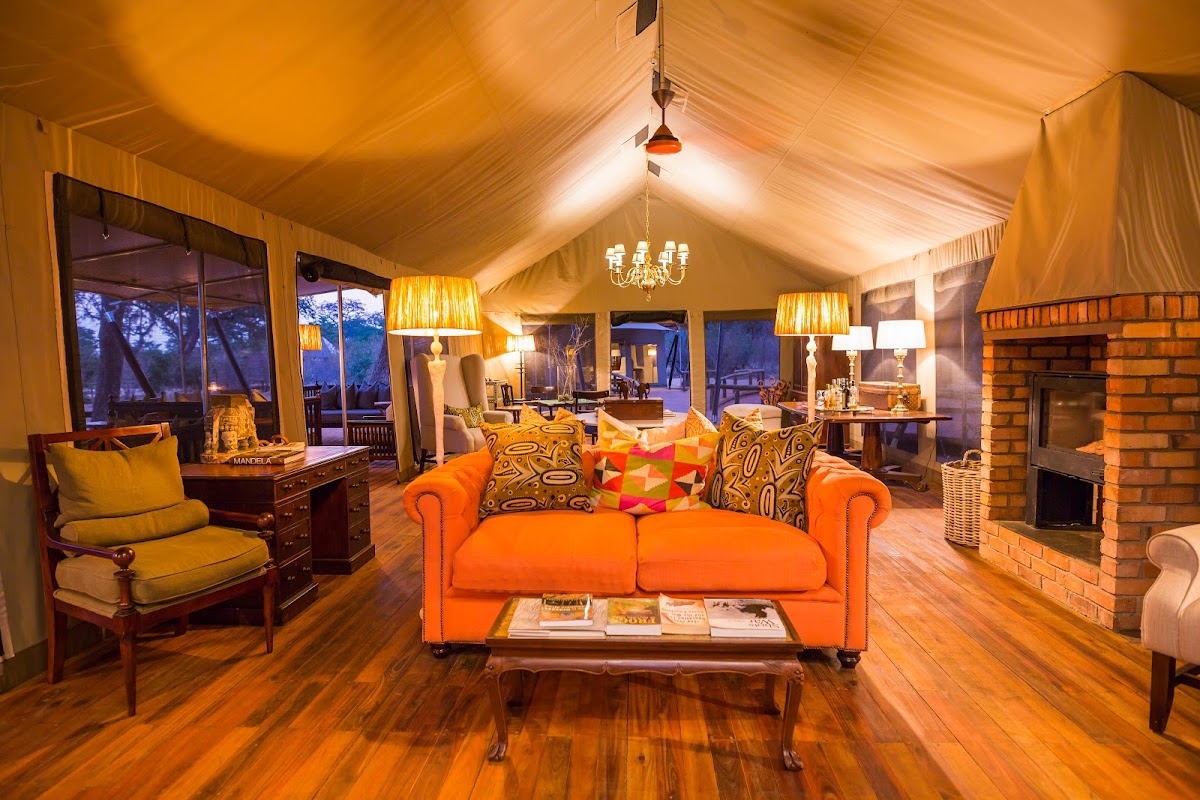 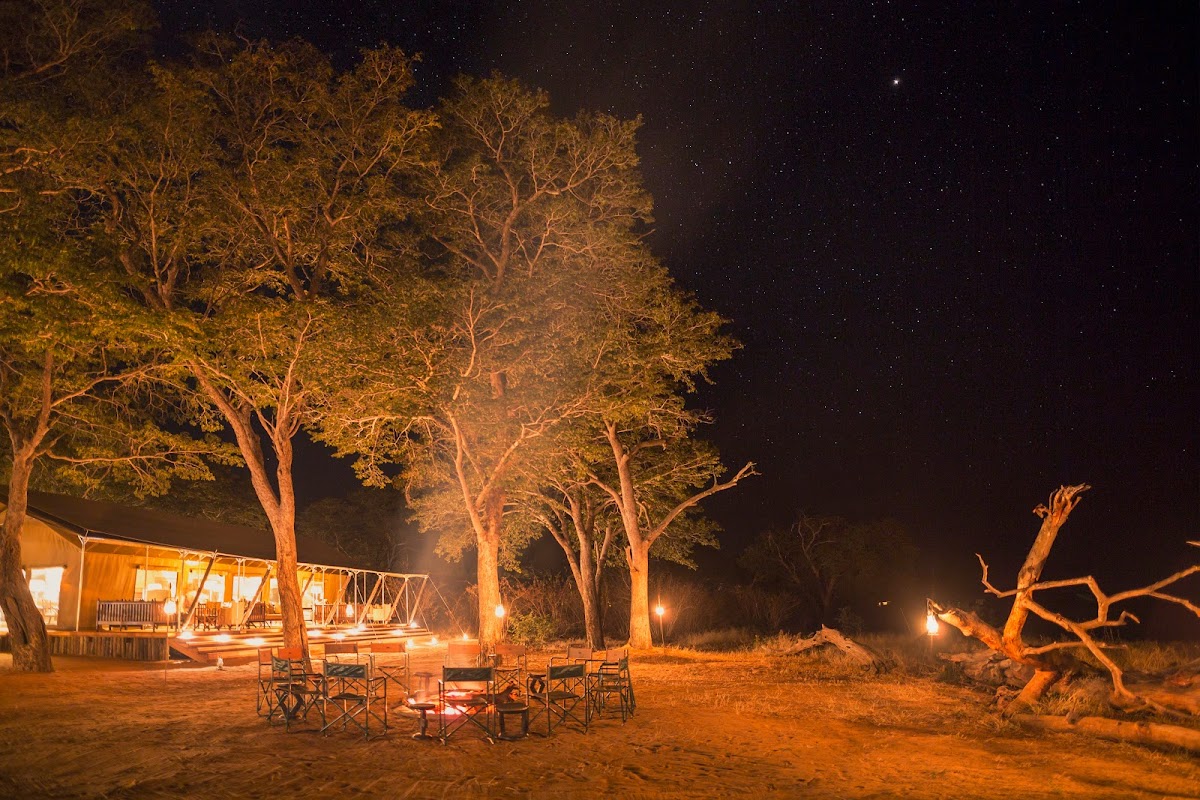 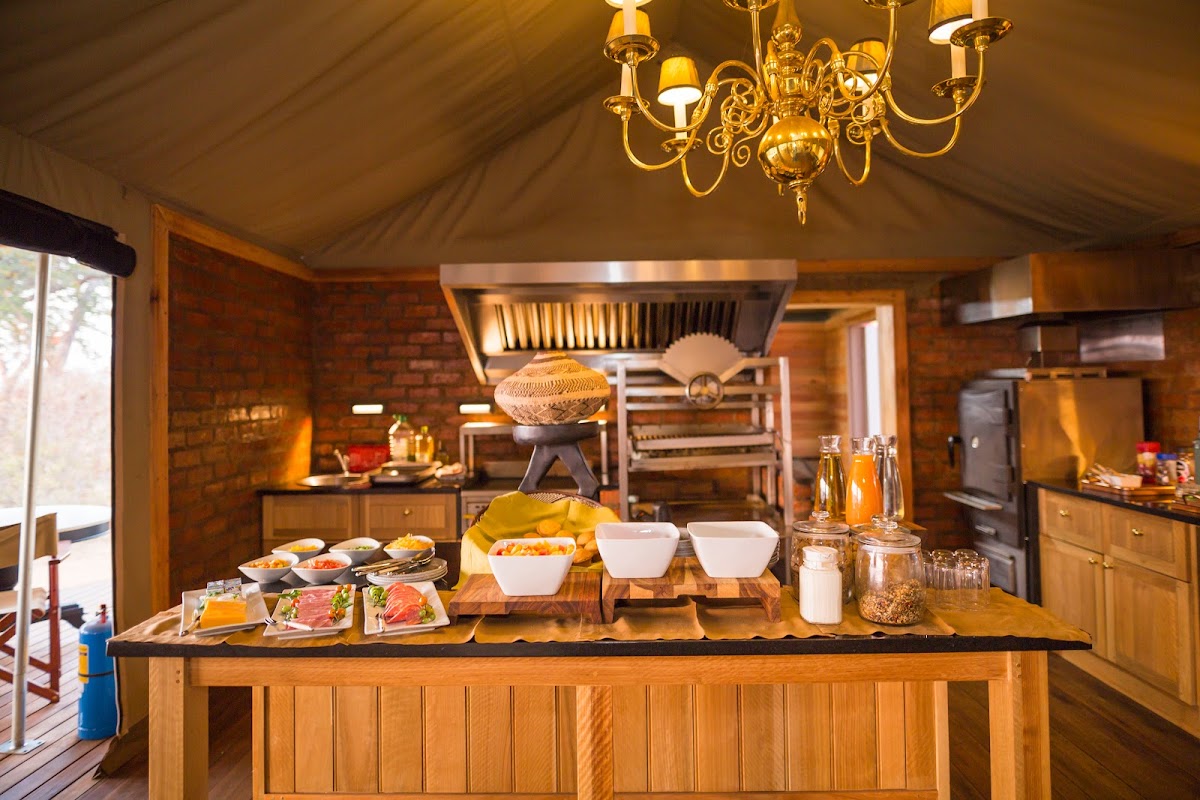 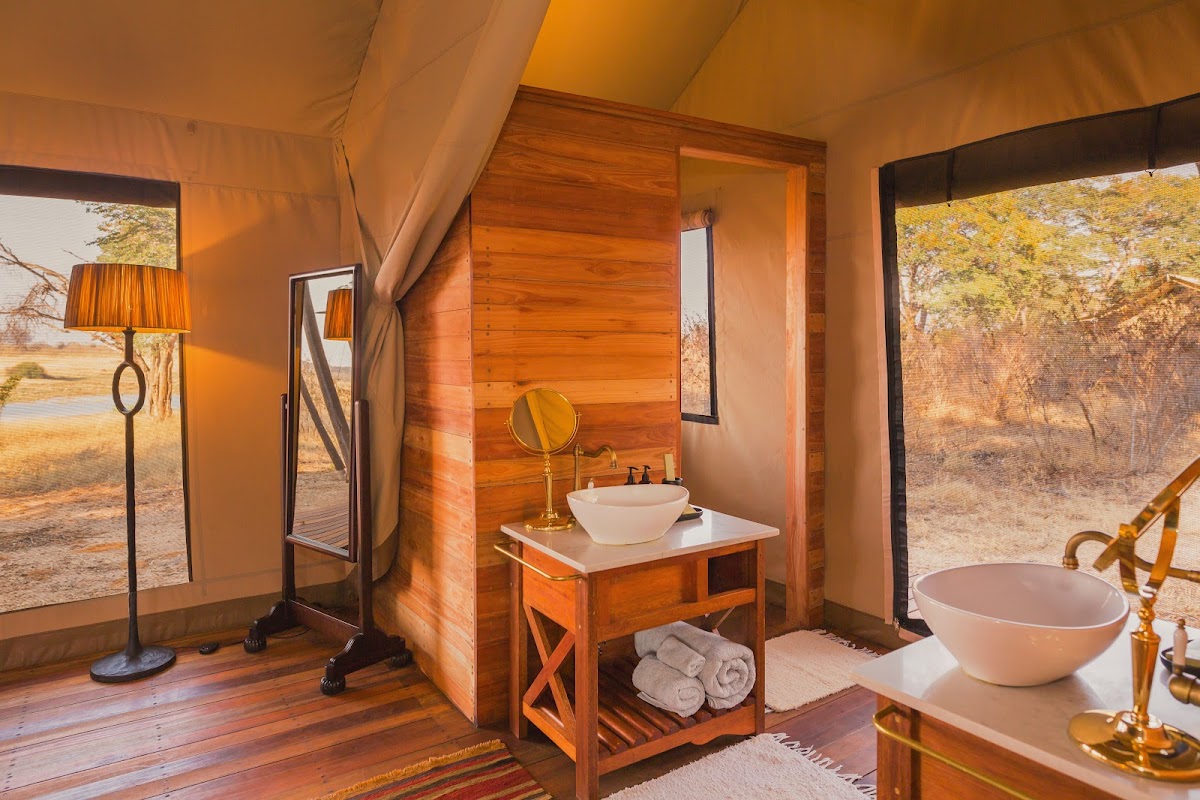 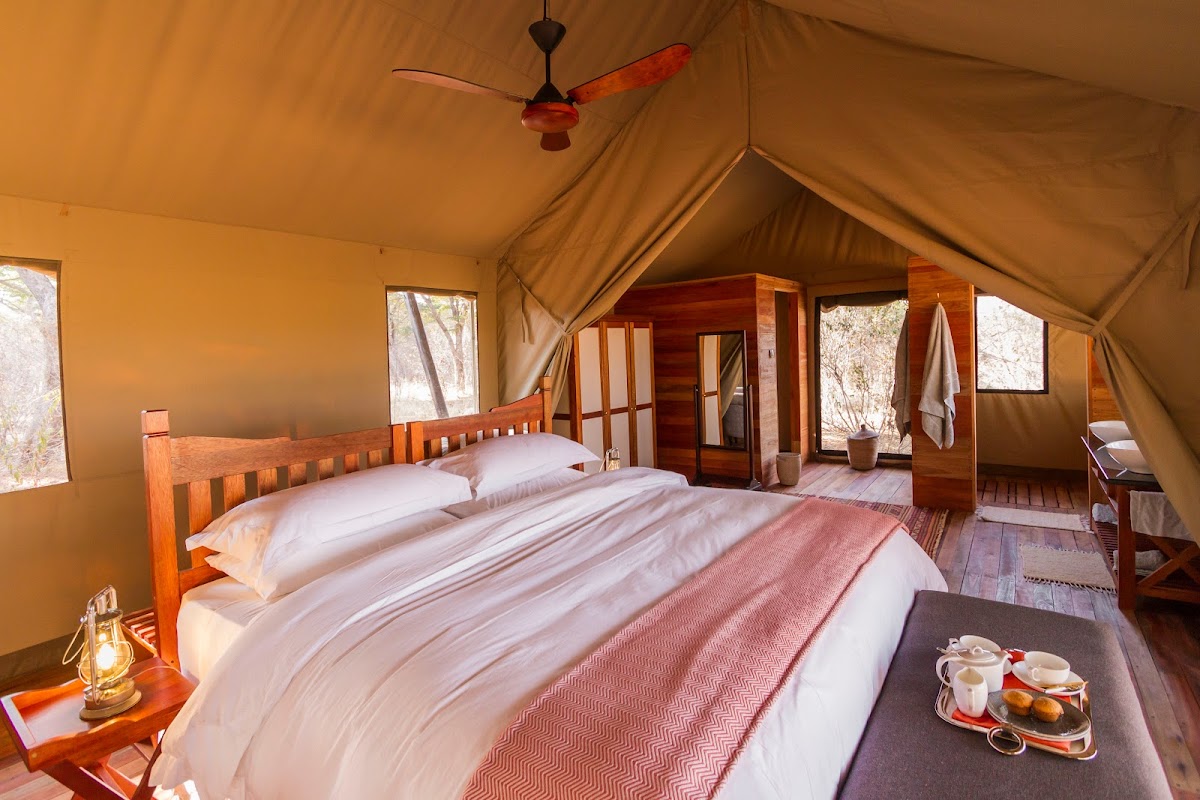 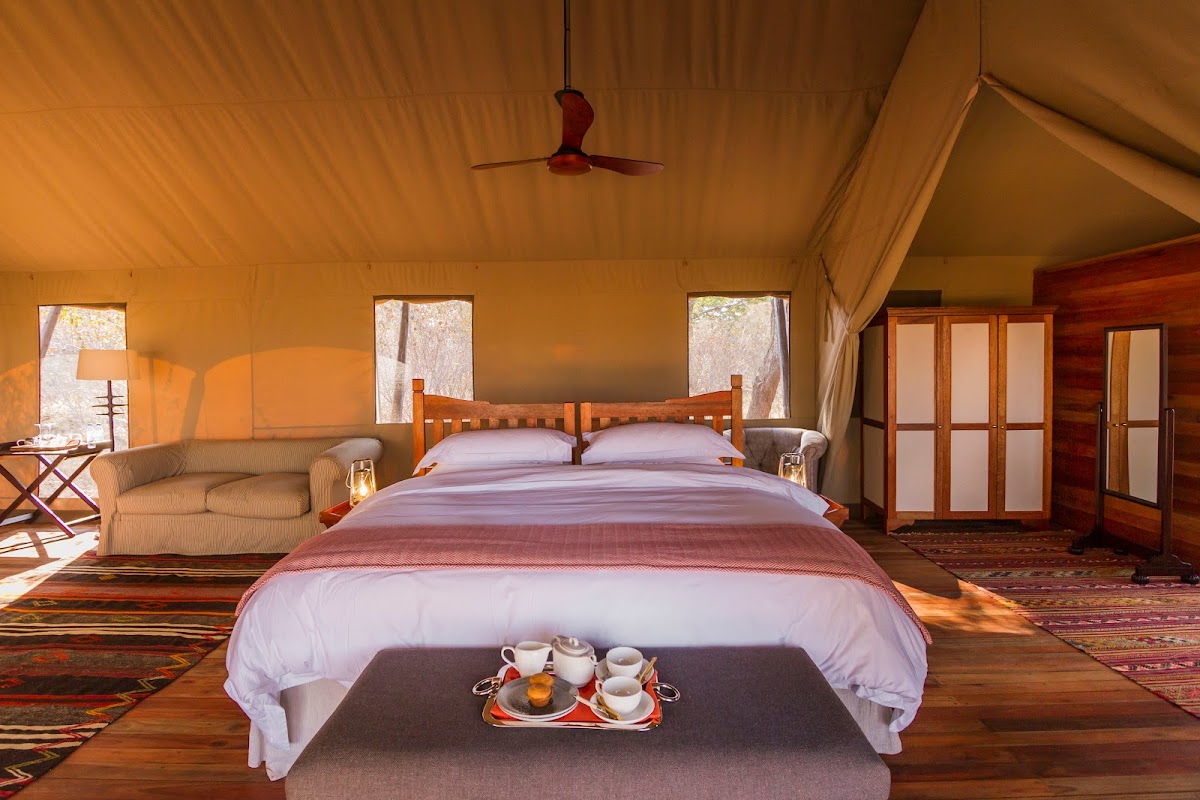 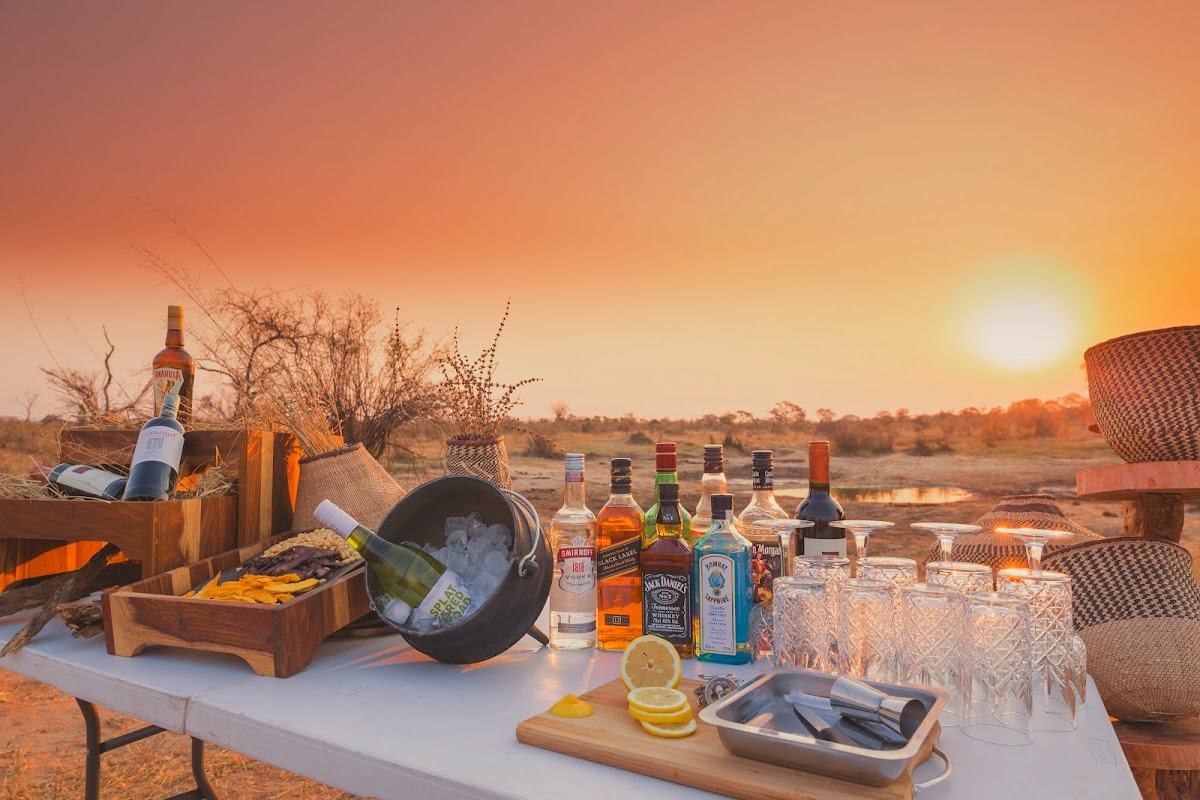 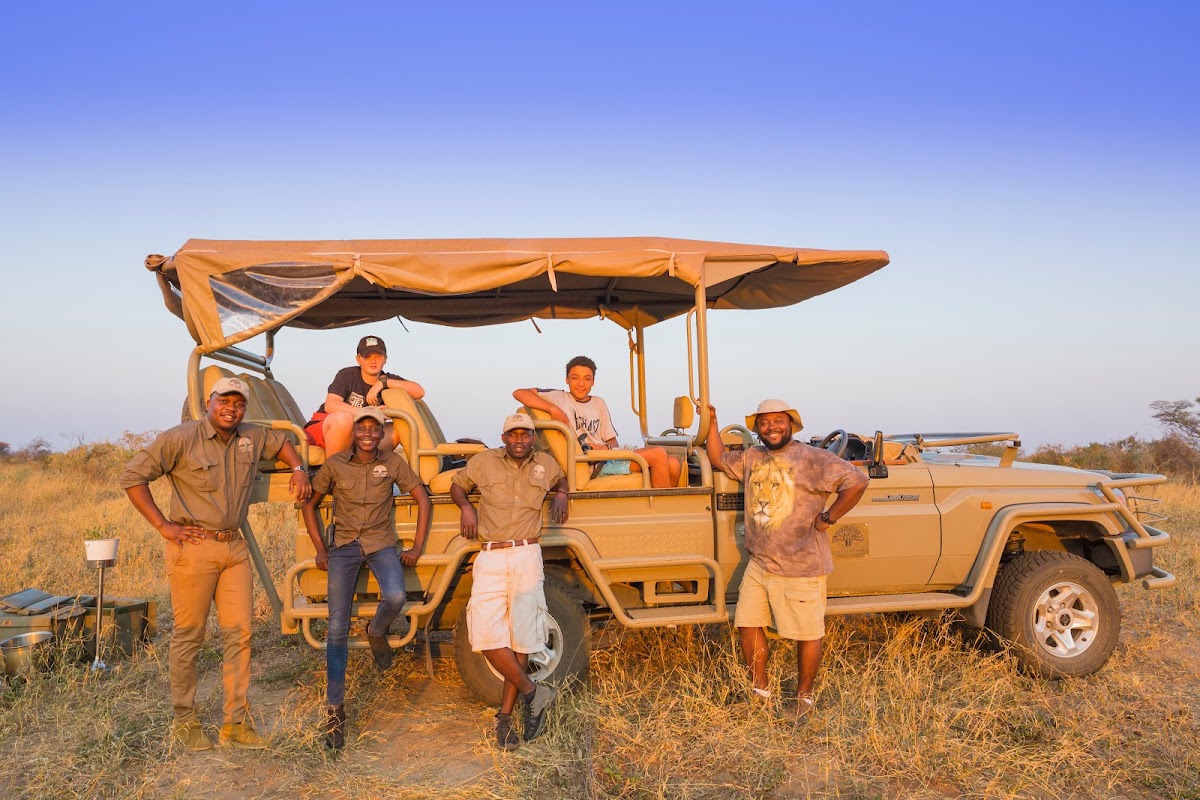 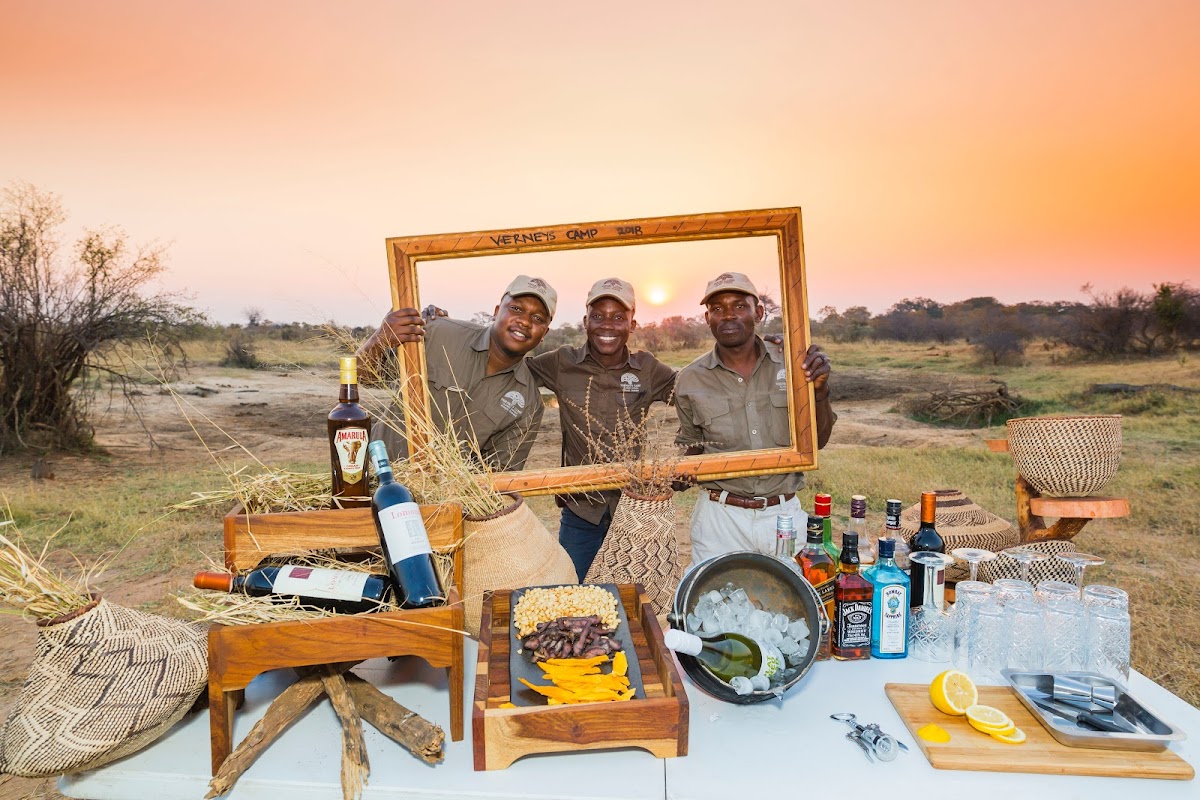 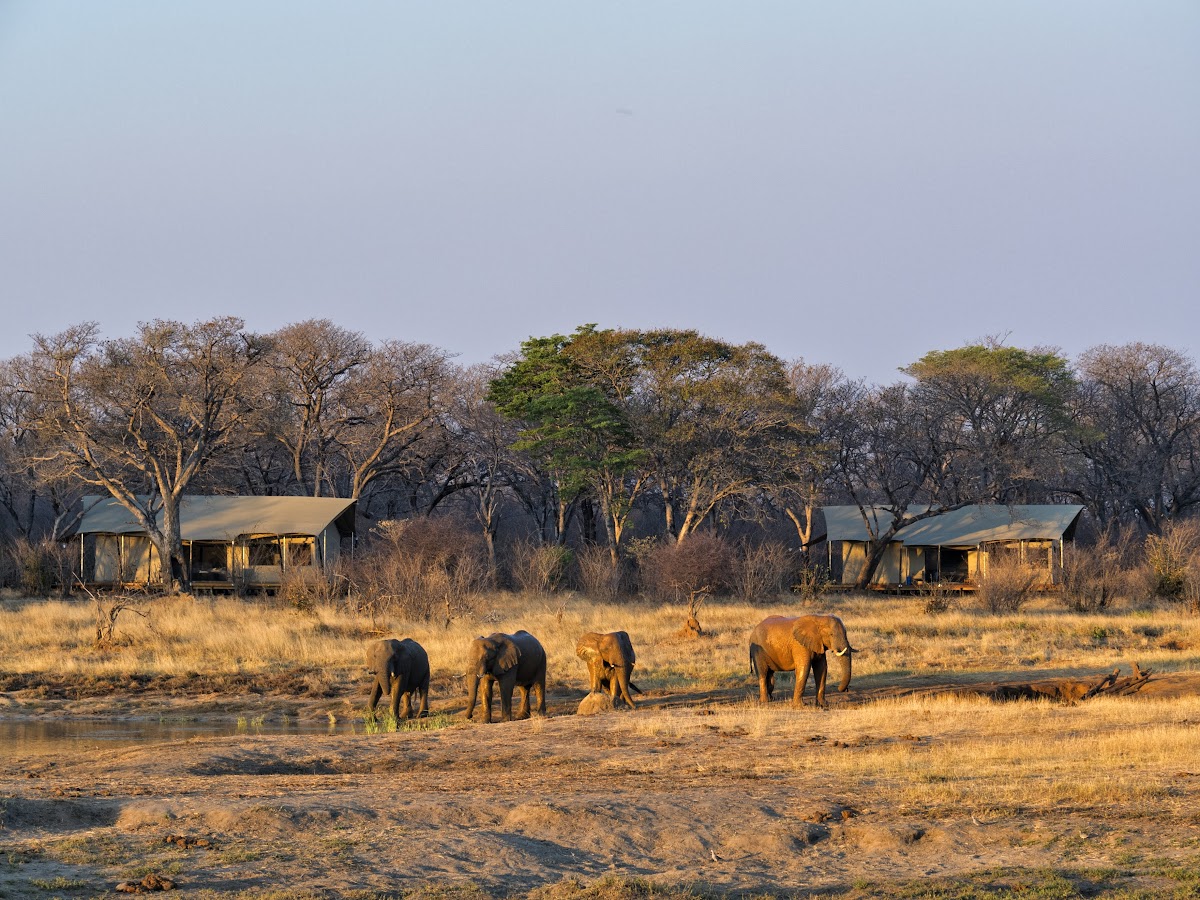 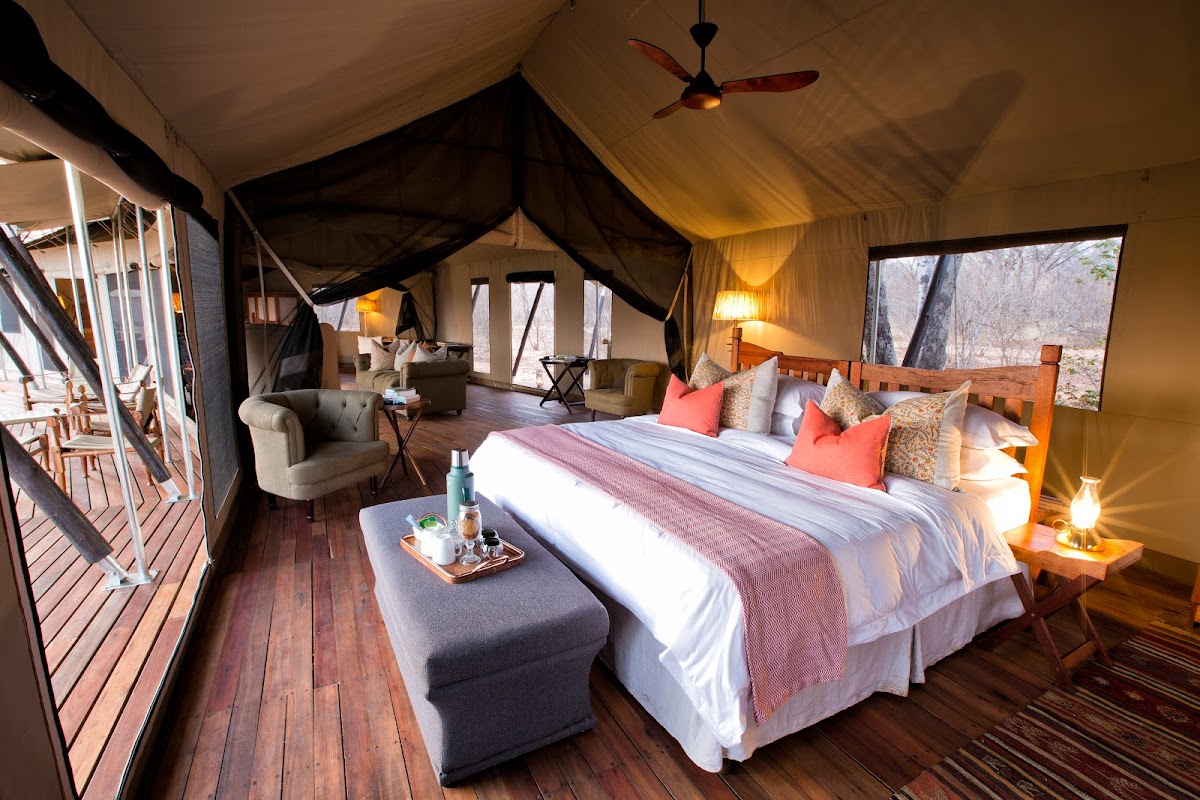 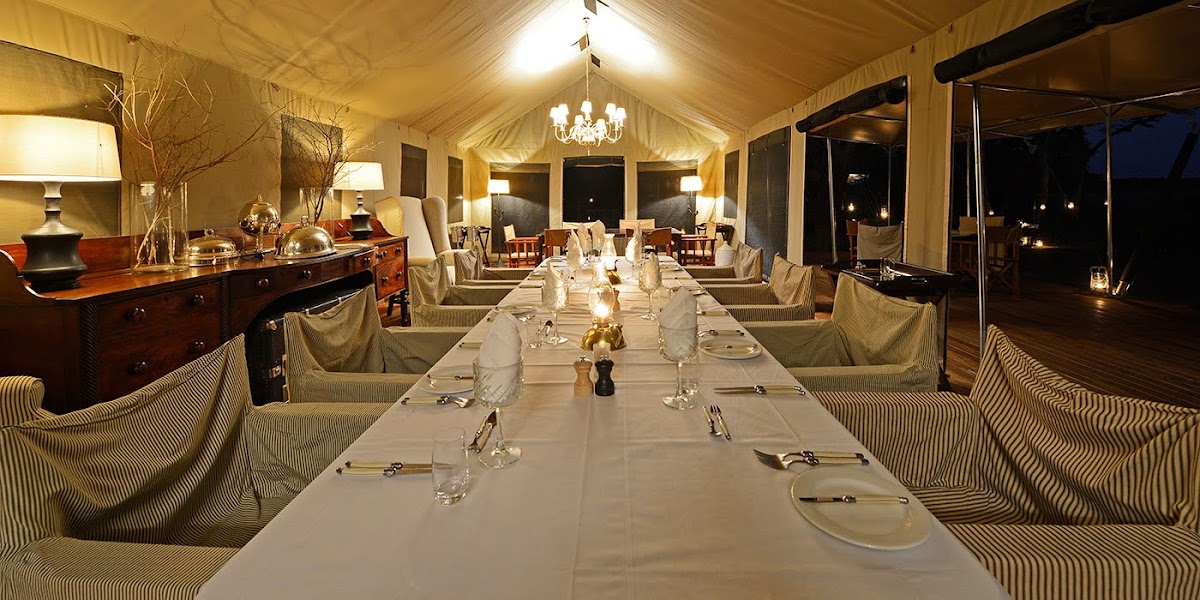 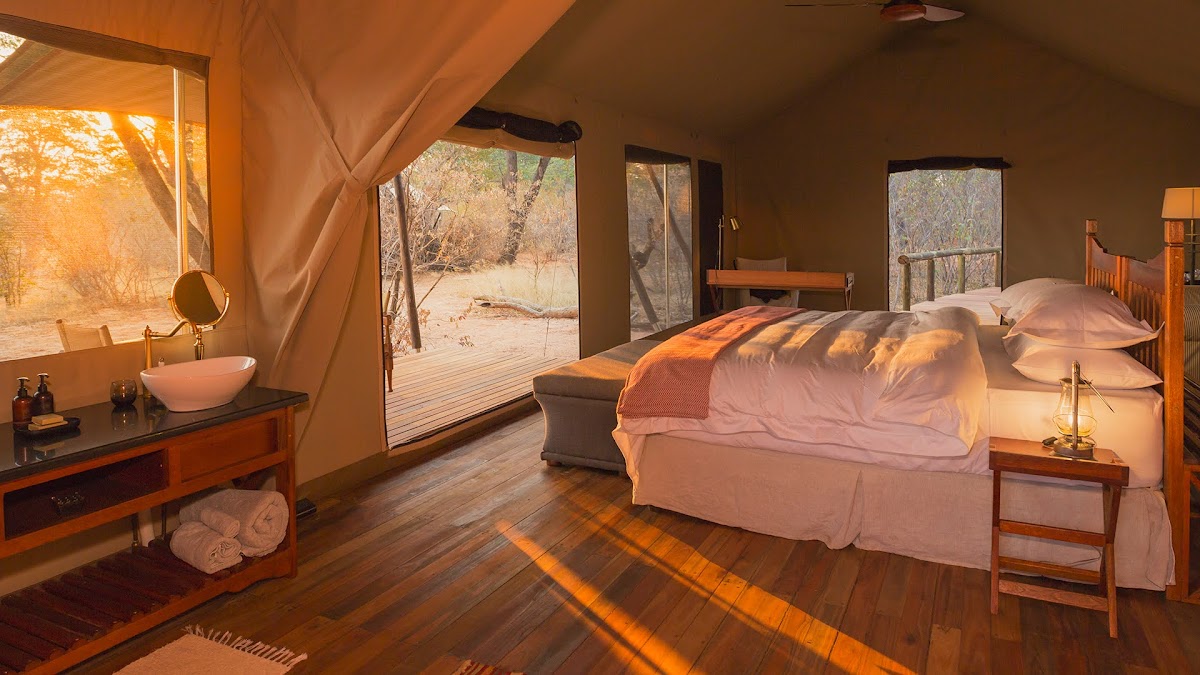 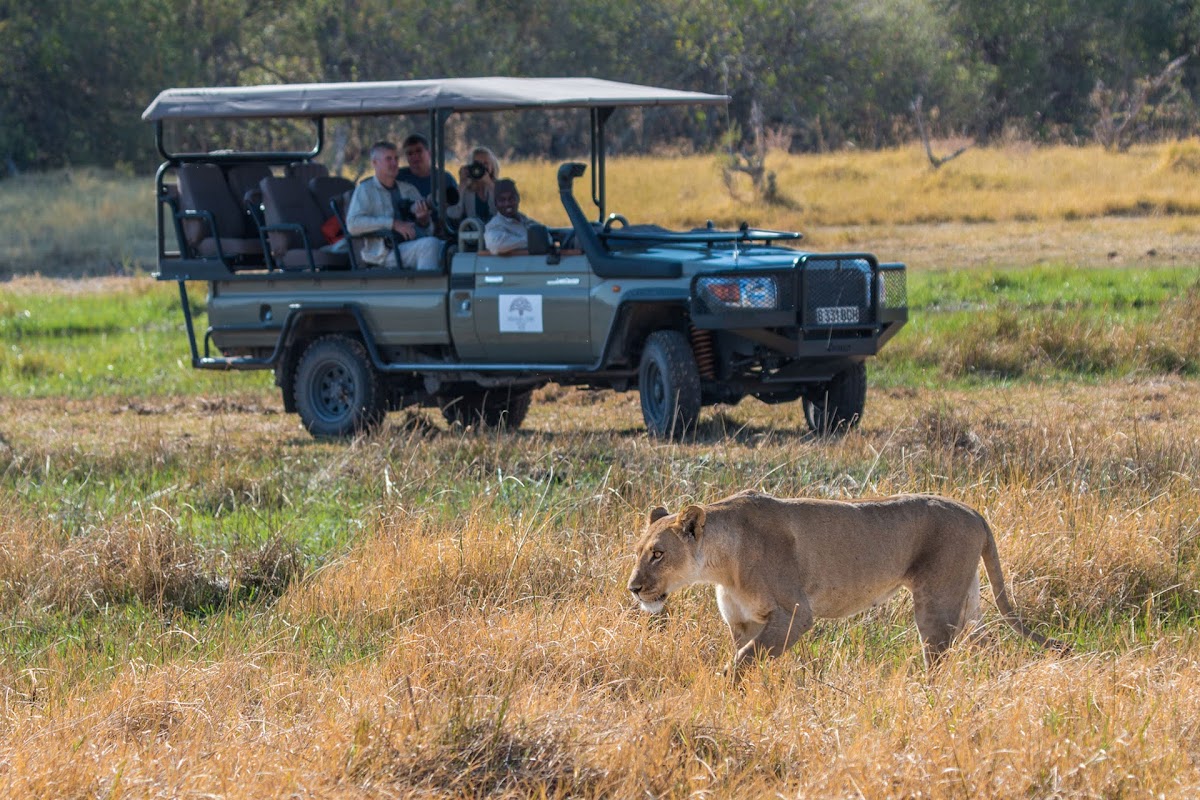 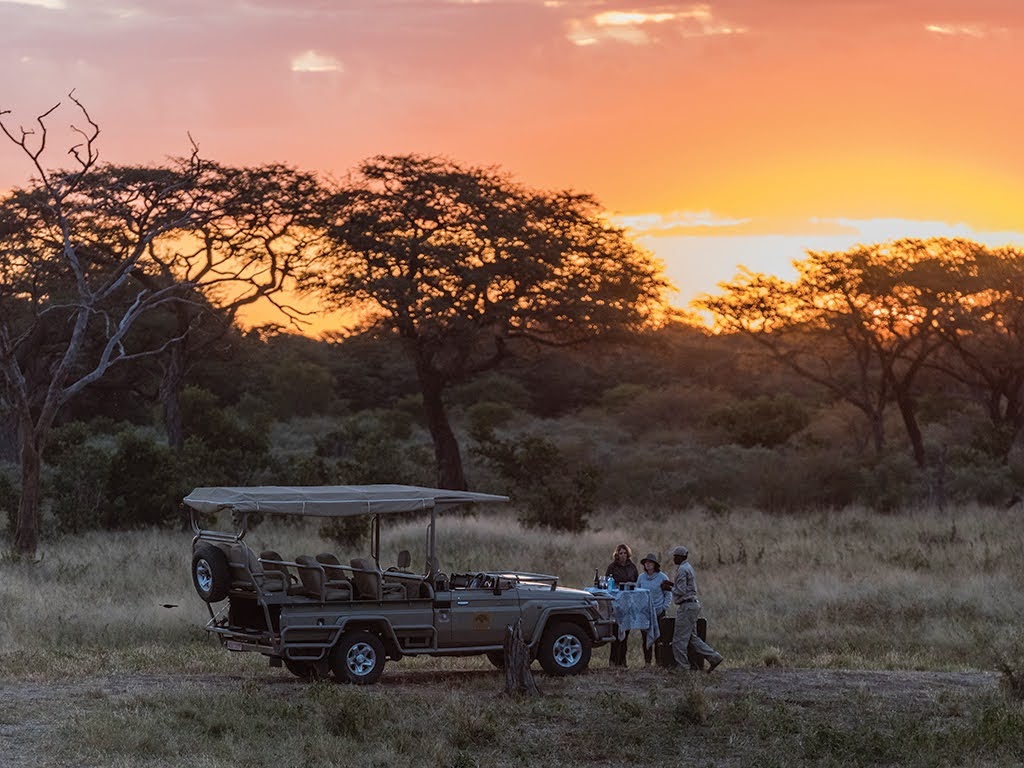 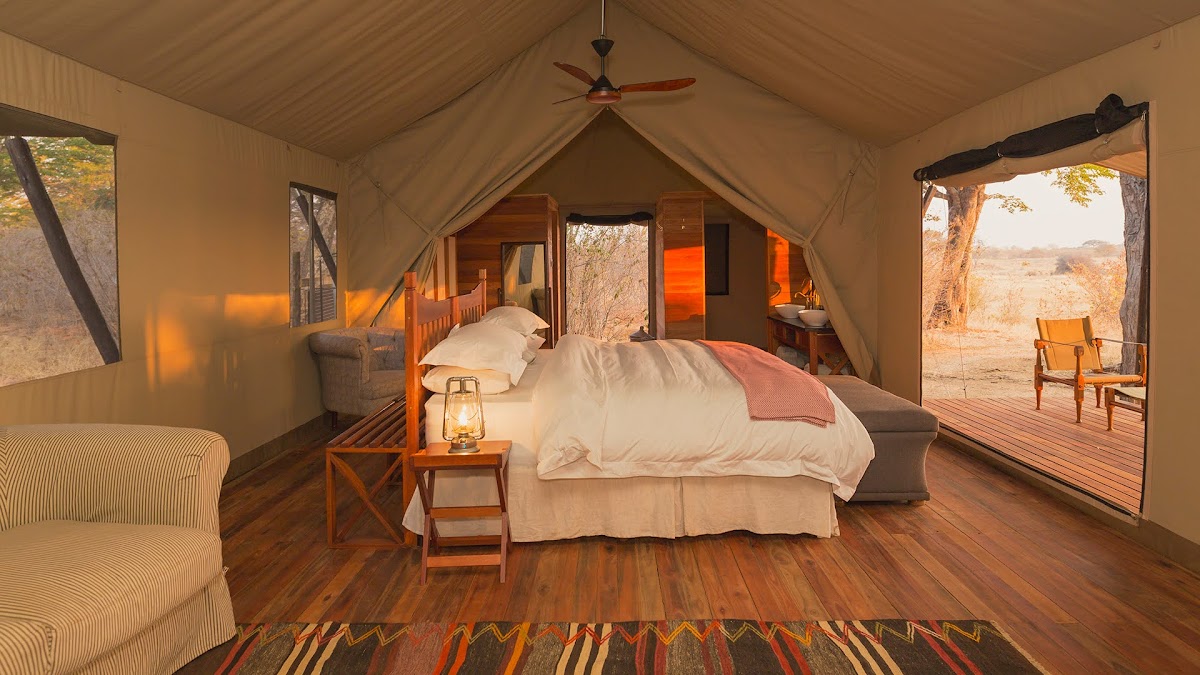 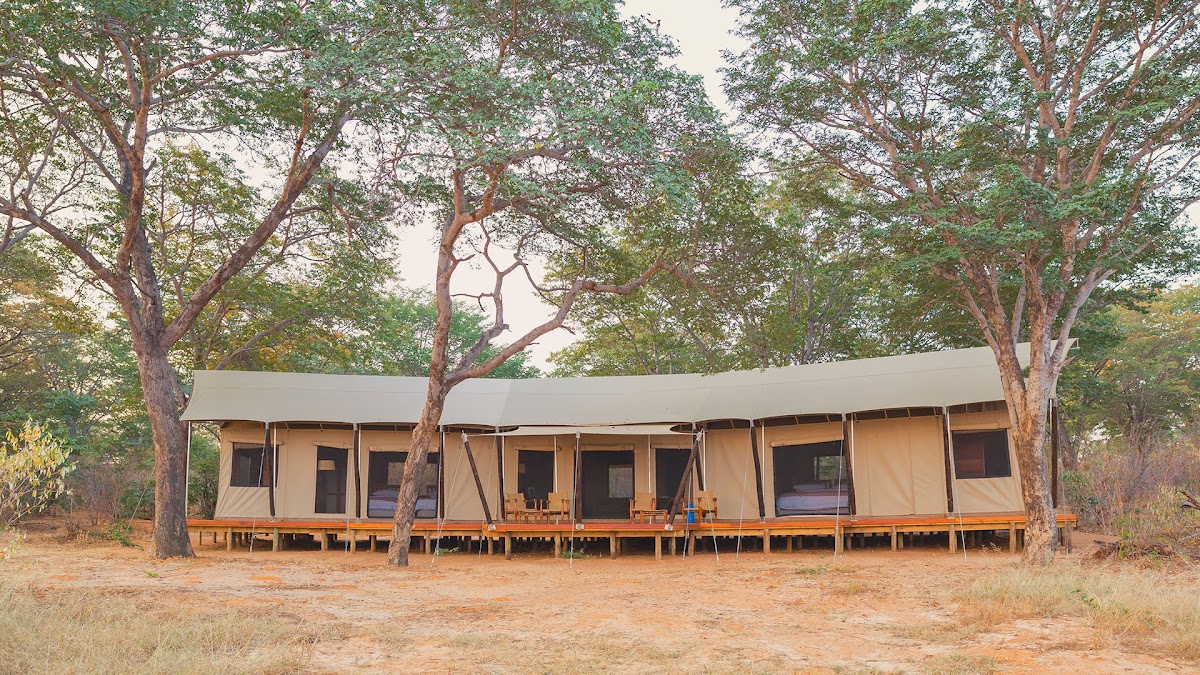 In a private 10,000-hectare concession within Hwange National Park, Verney’s Camp offers guests an exclusive safari experience in the heart of Zimbabwe’s wilderness. Resting on a large floodplain guarded by a wall of teak forest, Verney’s Camp has sweeping views of the surrounding landscape and overlooks the waterhole where an abundance of wildlife congregates. Marvel at the sight of Hwange’s elephants cooling off in the water from the comfort of the camp’s luxury tents. Enjoy prime game viewing, birdwatching, or exploring on this authentic safari stay, secluded within the sprawling park and surrounded by wildlife.

Verney’s Camp is located within a private concession within the Southeast section of Hwange National Park. The camp’s position beside a water pan allows for incredible wildlife viewing, and guests will be able to see Hwange’s famous elephants from the comfort of their tents. Guests can reach Verney’s Camp by flying to Victoria Falls Airport and then transferring to Manga Airstrip, before taking a 45-minute drive to the camp itself where you will be able to view incredible game en-route.

Hwange is the largest national park in Zimbabwe, covering over 14,600 square kilometres, and is home to approximately 50,000 elephants. Originally known as the Wankie Game Reserve, Hwange National Park was formed after the land became impossible to use for agricultural means. The park’s first warden, Ted Davidson, scouted the park in 1928, discovering very little wildlife due to the lack of natural water sources. In response, boreholes were drilled to create 60 artificial water pans, bringing back a rich variety of game. Today, travellers can expect to see a range of fascinating creatures, including buffalo, giraffes, hippos, wildebeest, sable antelopes, zebras, lion, and spotted hyenas, as well as over 400 species of birdlife.

A sought-after combination of prime location, comfort, and exceptional wildlife and bird viewing, Verney’s Camp is tucked into the teak forest on its elevated platform that allows for sweeping views over the pan and waterholes. With ten en-suite luxury eco-tents, guests can feel close to nature without sacrificing the conveniences of comfortable beds and a full bathroom. Each room has been designed to maximise privacy while optimising views of the land, taking décor inspiration from the surrounding African wildlife and traditional safari.  The team prides itself in maintaining a “delicate balance between comfort and environmental impact” with its reliance on solar energy and forgoing energy-heavy appliances.  Guests can enjoy refreshing dips in the pool or socialising in the convivial dining or lounge tents.

The rainy season in Zimbabwe begins in November, when the weather begins to become less predictable and rainy afternoons become increasingly likely. December to March are the wettest months of the year, the afternoons characterised by high temperatures and humidity. In April, summer comes to an end and the days begin to get cooler. Rain becomes less common as the year transitions into May and the dry season lasts until late October. Mornings and evenings throughout the dry season can be quite cold and guests may want to bring jumpers and warm clothes for early morning game drives.

Verney’s Camp is home to 8 Luxury Tents with a choice of a double or twin bed configuration. Each of the rooms is spacious, with 270-degree views of the floodplains and surrounding forest that offer the tents some shade. The tents’ private decks also offer brilliant views of the waterhole, where elephants frequently gather.

Each room has premium quality mattresses, bedding, bathroom amenities and furnishing and an en-suite bathroom, complete with a shower, flushing toilet and double vanity. Each rustic and thoughtfully designed room takes décor inspiration from a traditional African safari while considering the environment. The tents have electric lights, fans, and charging stations, with international 220V plug points.

The 2 Luxury Family Tents have the same high-quality standards and amenities as the other tents, but include a second bedroom, catering for up to four guests at a time. The tent’s extended deck runs the length of the front, with an outdoor sitting area for families to spend some quality time together against the backdrop of the floodplains. The family tents are positioned closest to the main area for ease of access, and offer the best views of the water pan where you will be able to watch the animals gather and enjoy game viewing at your own leisure.

Each room has premium quality mattresses, bedding, bathroom amenities and furnishing and an en-suite bathroom, complete with a shower, flushing toilet and double vanity. Each rustic and thoughtfully designed room takes décor inspiration from a traditional African safari while considering the environment. The tents have electric lights, fans, and charging stations, with international 220V plug points.

Guests can look forward to three delicious meals each day at Verney’s Camp. Start the day with a selection of breakfast foods from the buffet or a hot breakfast cooked to your preferences. The camp’s chefs will prepare hot meals for both lunch and dinner which can be enjoyed in the communal dining area, giving you a chance to connect with your fellow guests and swap exciting safari stories. All meals are prepared using fresh ingredients, and dietary requirements can be catered for if advanced notice is given.

Venture out on an exciting game drive and explore Hwange National Park from the comfort of a specialised safari vehicle. Machaba’s knowledgeable guides will be able to teach you interesting facts about the incredible animals of Zimbabwe, as well as showing you the best spots for viewing game. Look out for Hwange’s massive elephant population, giraffes, zebras, lions, hyenas, buffalo, wildebeest and hippos, as you traverse the plains and roam the African wilderness. Guests can choose to go on an all-day drive with a picnic lunch to optimise their time in the wilderness. Night drives are also available, allowing guests to spot the wilderness’ smaller nocturnal species that remain hidden during the day.

Explore the bush on foot on a guided walk and experience the smaller details that make safaris more immersive. Guests will be driven to a good walking location and your experienced guide will be able to teach you how to recognise tracks, and follow clues left in the wilderness that will lead to incredible game viewing opportunities. Explore at your own pace, without the noise of an engine to startle the wildlife and take advantage of incredible photographic opportunities.

Hwange National Park is home to an abundance of birdlife, with over 420 different species of bird sightings recorded here. Guests who are particularly interested in bird watching may wish to visit during Zimbabwe’s summer (November to April) when the migratory birds return to the Hwange region. Look out for the kori bustard, bateleur eagle, southern ground hornbill and secretary bird, as well as Zimbabwe’s large variety of raptors. Bring your camera and make the most of this incredible photographic opportunity, or simply enjoy watching the birdlife through a pair of binoculars in peace and quiet.

Guests staying at Verney’s Camp will be offered a chance to visit the local village and Hwange Main Primary School, which Machaba Safaris supports through their Social Responsibility Program. Take a tour of the school and meet the pupils who study there. Guests will have the chance to learn from the students while teaching them in return.

Machaba Safaris provide support for the Main Camp Primary School, located in a remote village that borders the Hwange National Park. This support includes providing teacher’s wages, facilities, textbooks and a new solar-powered computer lab. They also built the first Gonnye Sethlare Preschool in May 2019 which provides education for 36 children, and there are plans to build more of these education centres in other locations. Their youth development plan gives young men and women the chance to gain work experience and the necessary training to become lodge managers.

Machaba Safaris work with local stakeholders and communities in order to safeguard the crucial ecosystems that exist in Botswana and Zimbabwe. They provide educational programs and talks in order to teach how humans and wildlife can coexist, as well as giving aid to anti-poaching patrols within the NG32 zone. Human-wildlife conflict can occur when humans and wildlife are living close together. Predators may attack livestock, and elephants can trample or steal crops, causing people to lose their livelihoods and/or retaliate. By teaching peaceful solutions to these issues, and showing the benefits of living alongside wildlife, Machaba Safaris is helping to both protect wildlife and prevent local people from resorting to poaching.

Machaba Safaris work to identify infrastructure needs within the communities and countries that they operate in. This includes providing water to vulnerable communities, establishing sustainable vegetable gardens, putting up animal-proof fencing, and building homes for impoverished families.

Machaba Safaris intentionally do not use certain appliances such as hairdryers and air-con which demand a lot of electricity with intent to reduce their energy consumption. Verney’s Camp is powered by a combination of solar energy gathered by the camp’s solar panels, and a backup generator. Energy generated by the solar panels is stored in a battery bank which is then used to power the camp. The hot water supply is generated through a thermodynamic solar energy system so that hot water is always available despite the weather conditions. The camp also uses low energy consuming light bulbs to lessen their impact on the planet. To reduce their carbon footprint, Machaba Safaris use energy-efficient fridges in their kitchens, which are switched off at night to conserve power. Heat-sensitive items can then be stored in coal cold rooms and in the cellars to prevent them from heating up.

Machaba Safaris lodges are built with an ever-present consciousness for the environment at the forefront of operations. By utilising locally sourced, recyclable and biodegradable materials, their camps pose little detrimental effects to the environment in which they are situated. Negating the need to haul industrial quantities of construction materials and lumber long distances through vast habitats and ecosystems serves to maintain the ecological equilibrium desired within such operations. Furthermore, the implementation of eco-friendly architectural practices allows for the swift and complete recovery of all land used in the construction of Machaba Safaris properties, allowing for the rehabilitation of all properties in as few as 1 and a half years.

Machaba Safaris have strict measures in place to ensure the responsible handling of waste. All waste is treated in a way that means it will not have a negative impact on the surrounding environment. Each camp has separate bio plants that manage kitchen, laundry, and staff village solids. Once processed using in-camp bio-plant facilities, these waste products pose minimal detriment to the environment and serve to reduce the collective footprint of camp operations.

Children of all ages are welcome at Verney’s Camp, however, families with young children will need to book a private safari vehicle. 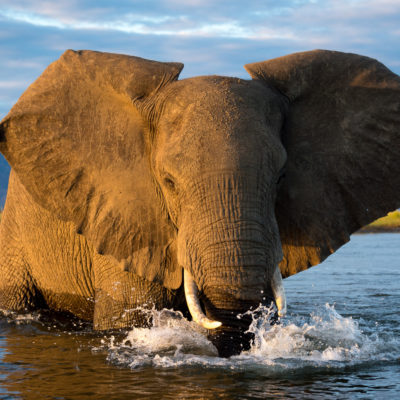