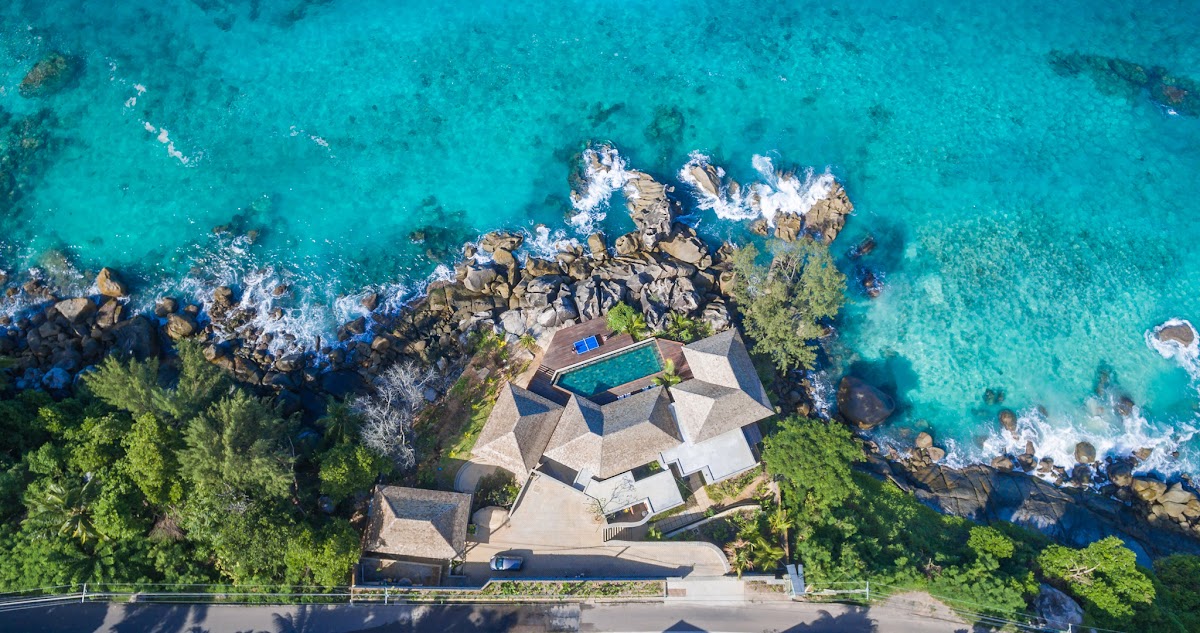 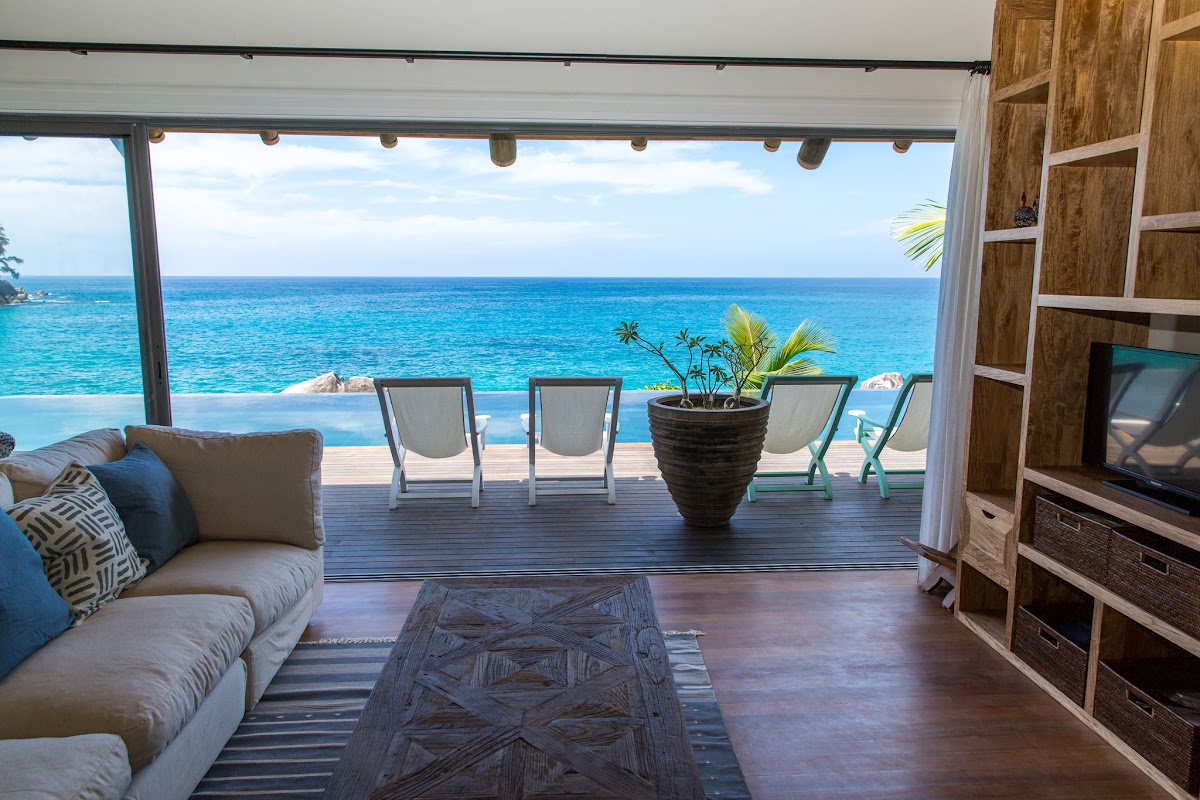 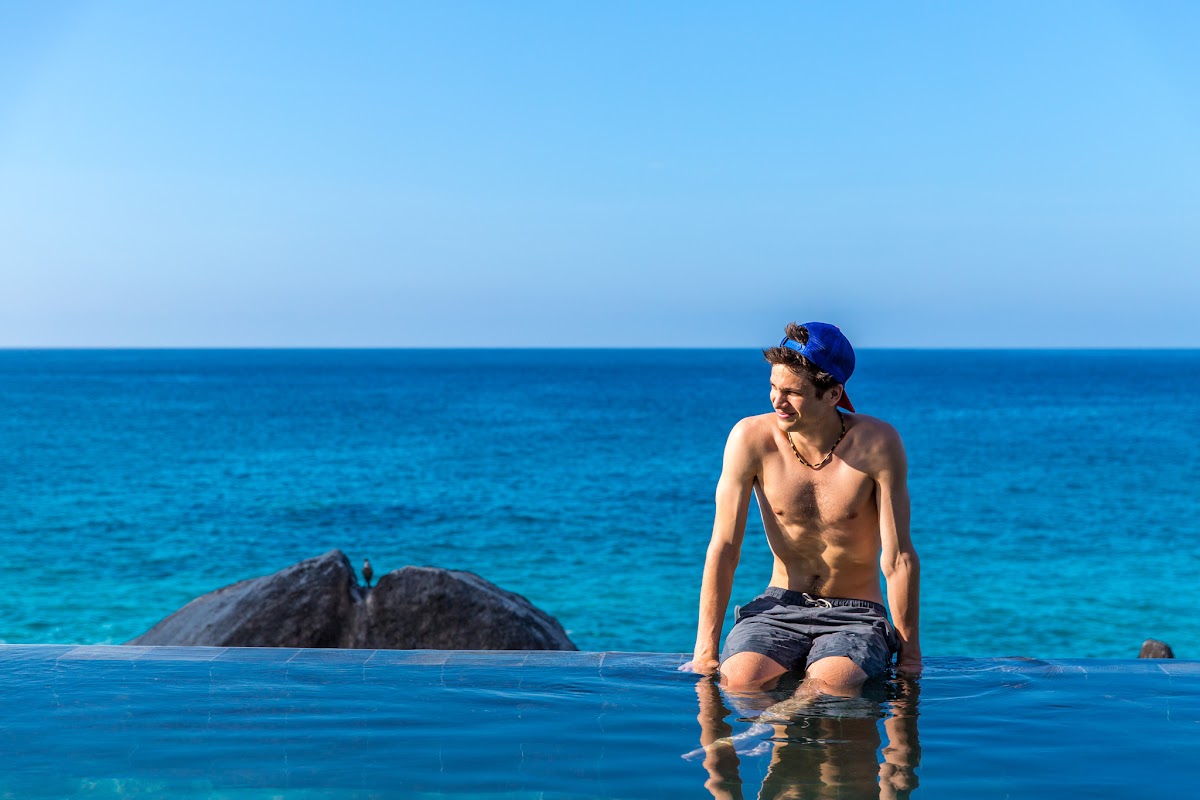 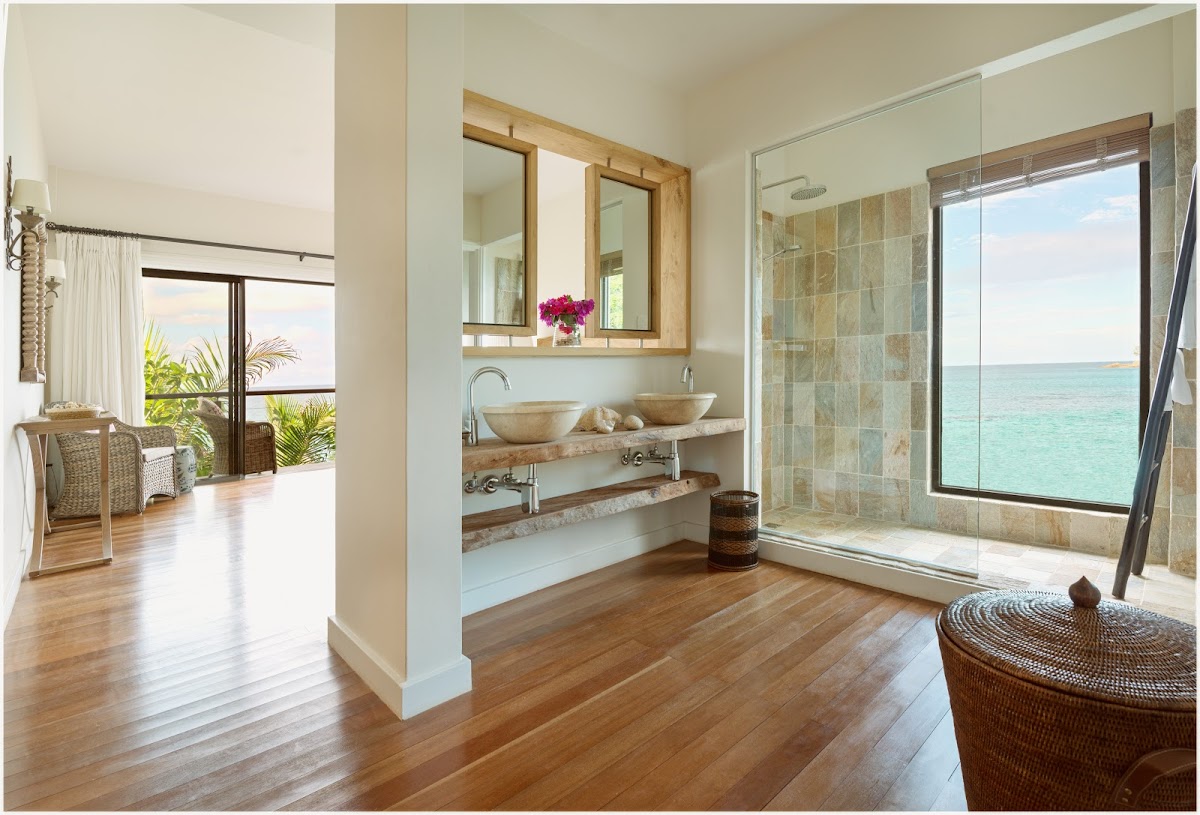 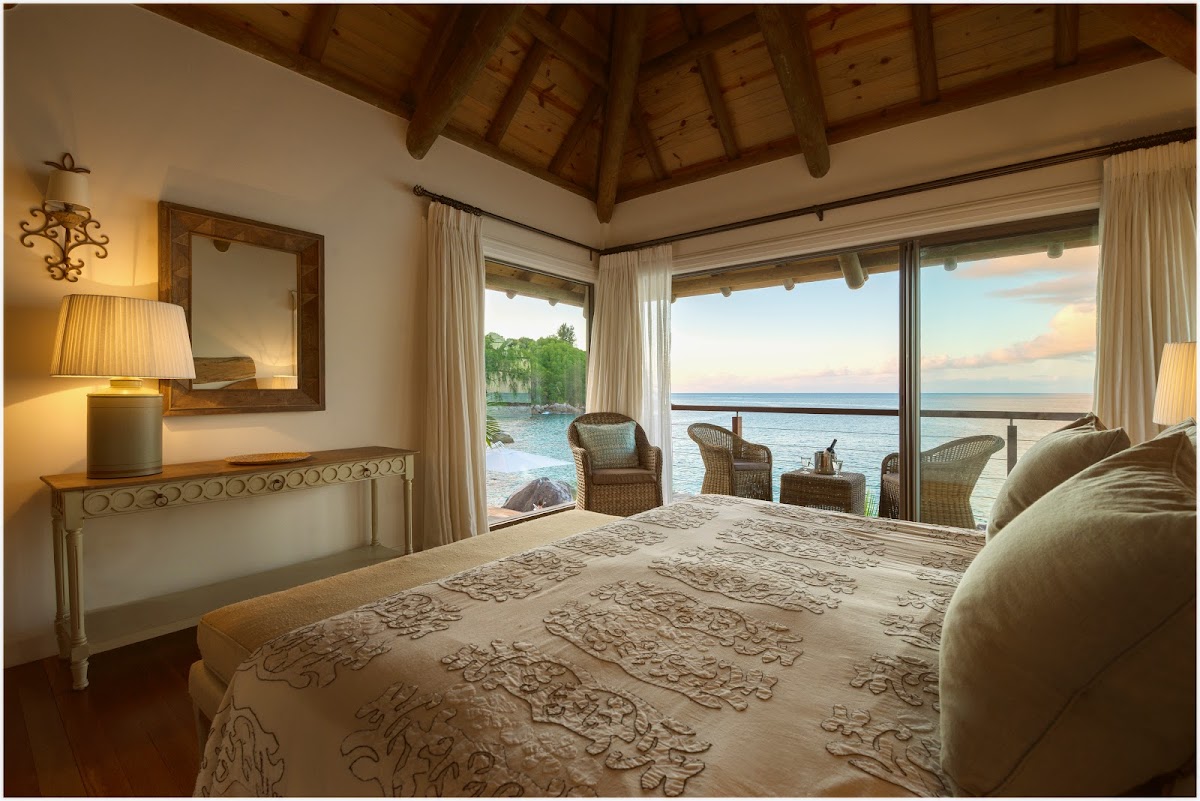 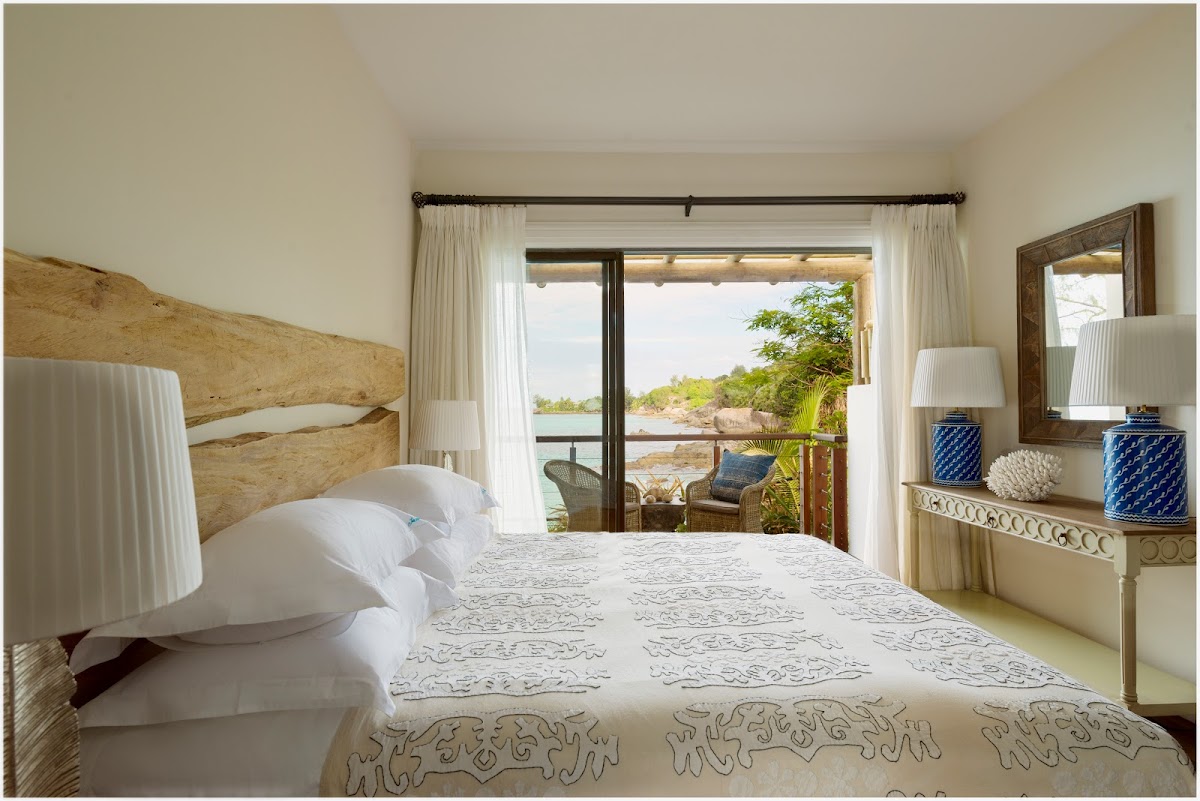 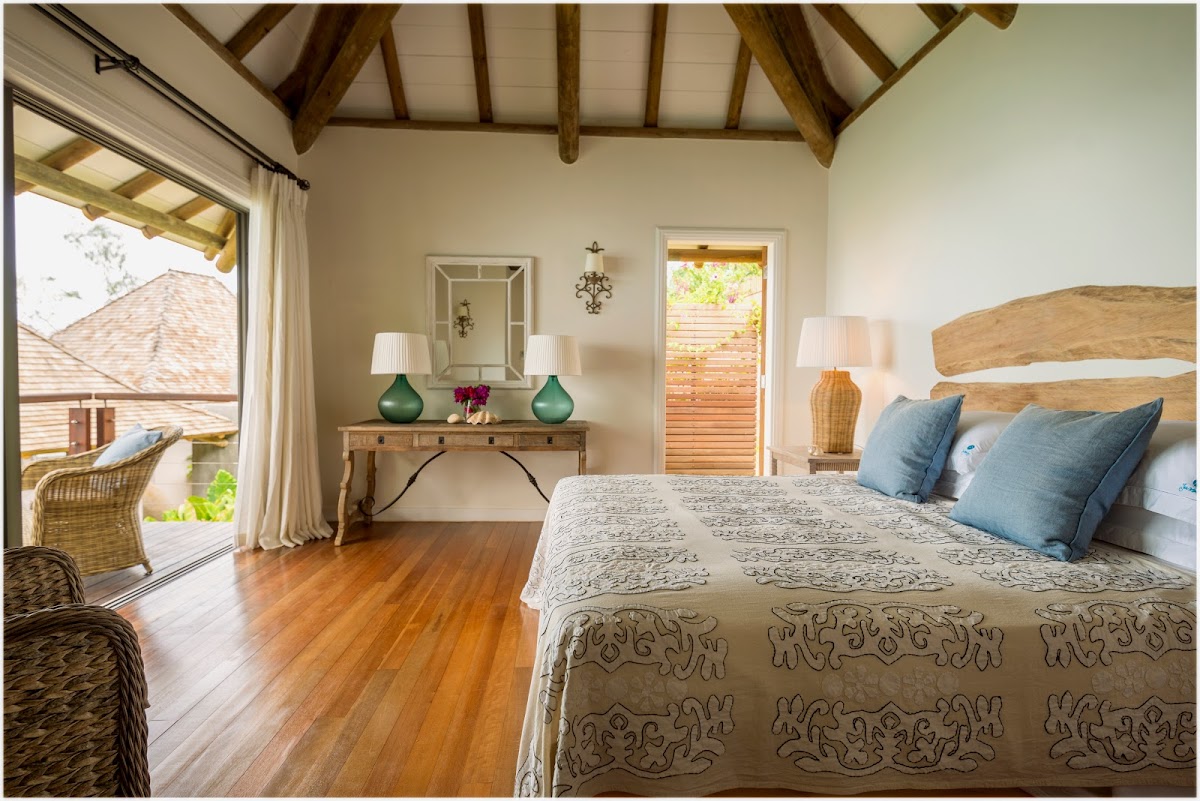 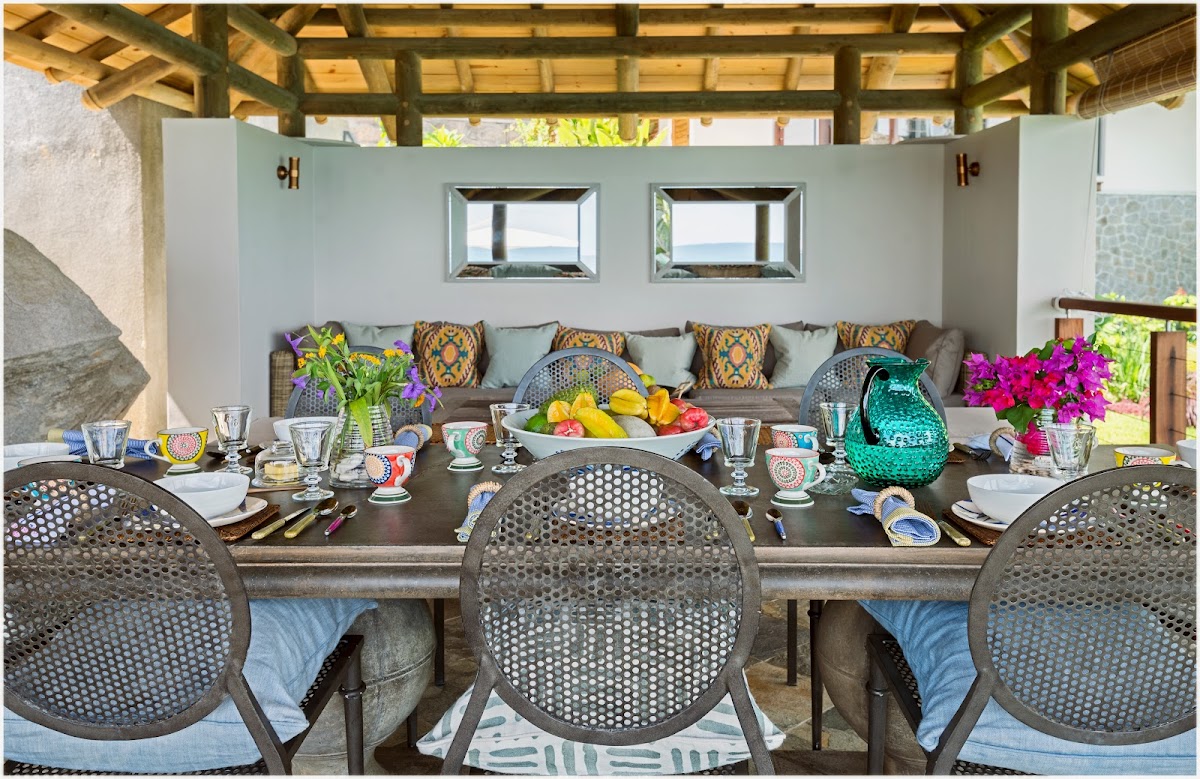 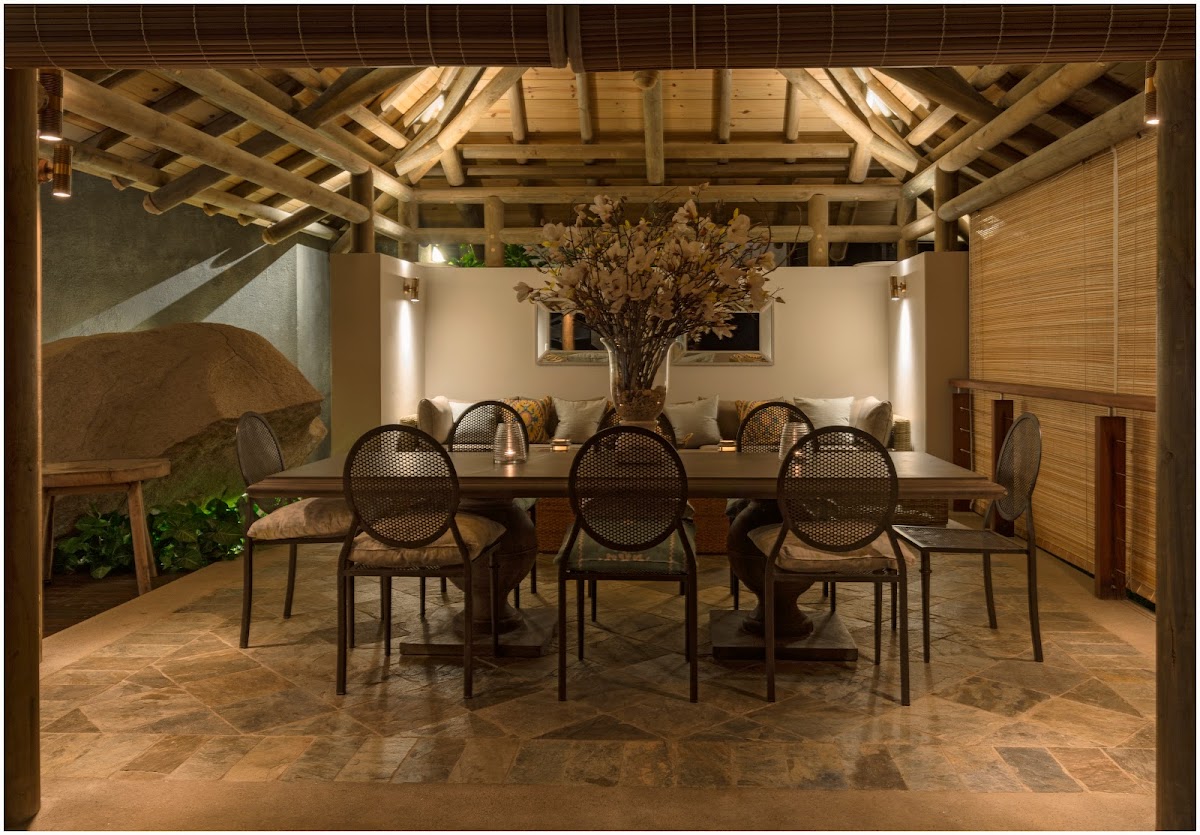 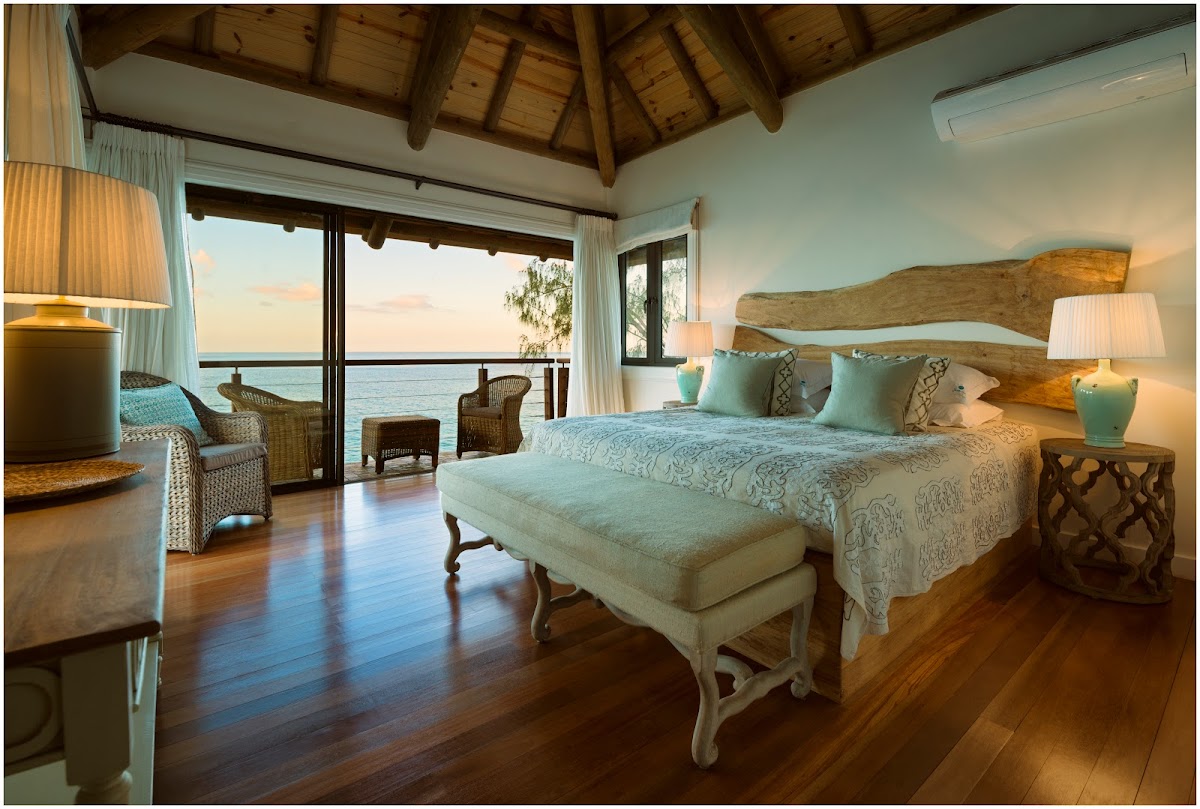 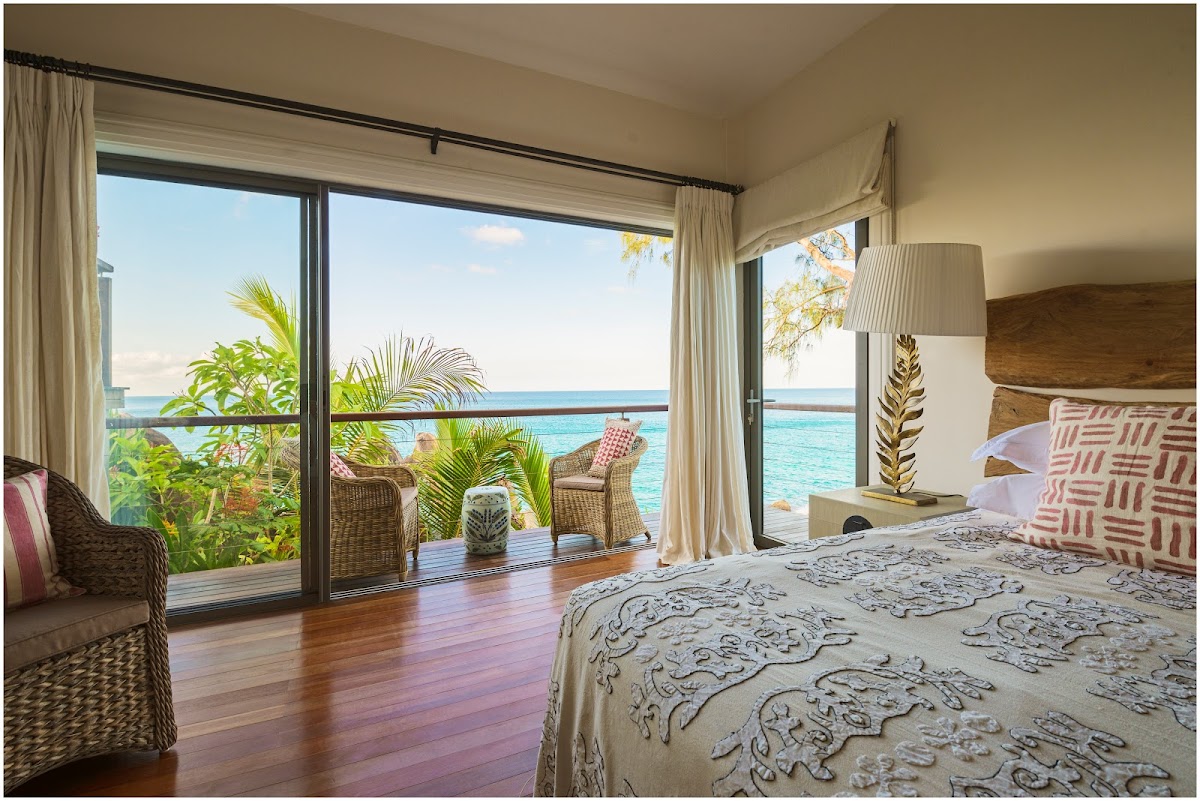 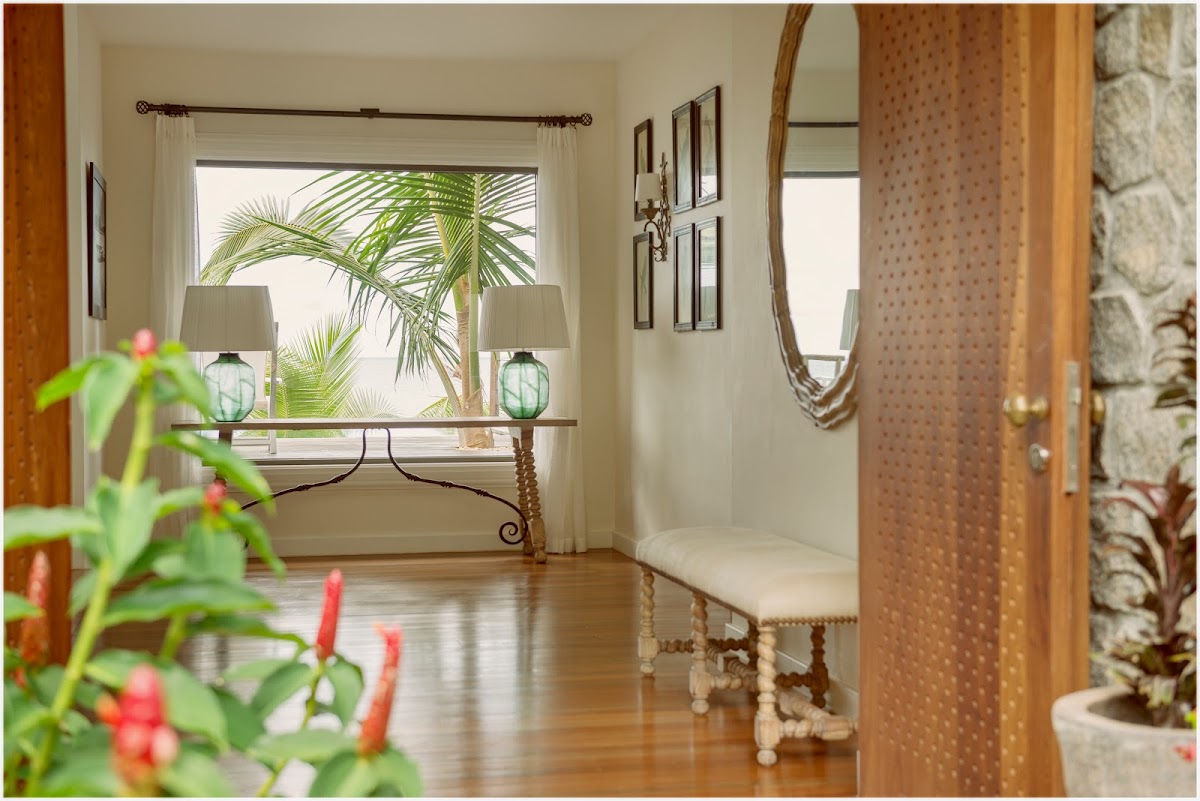 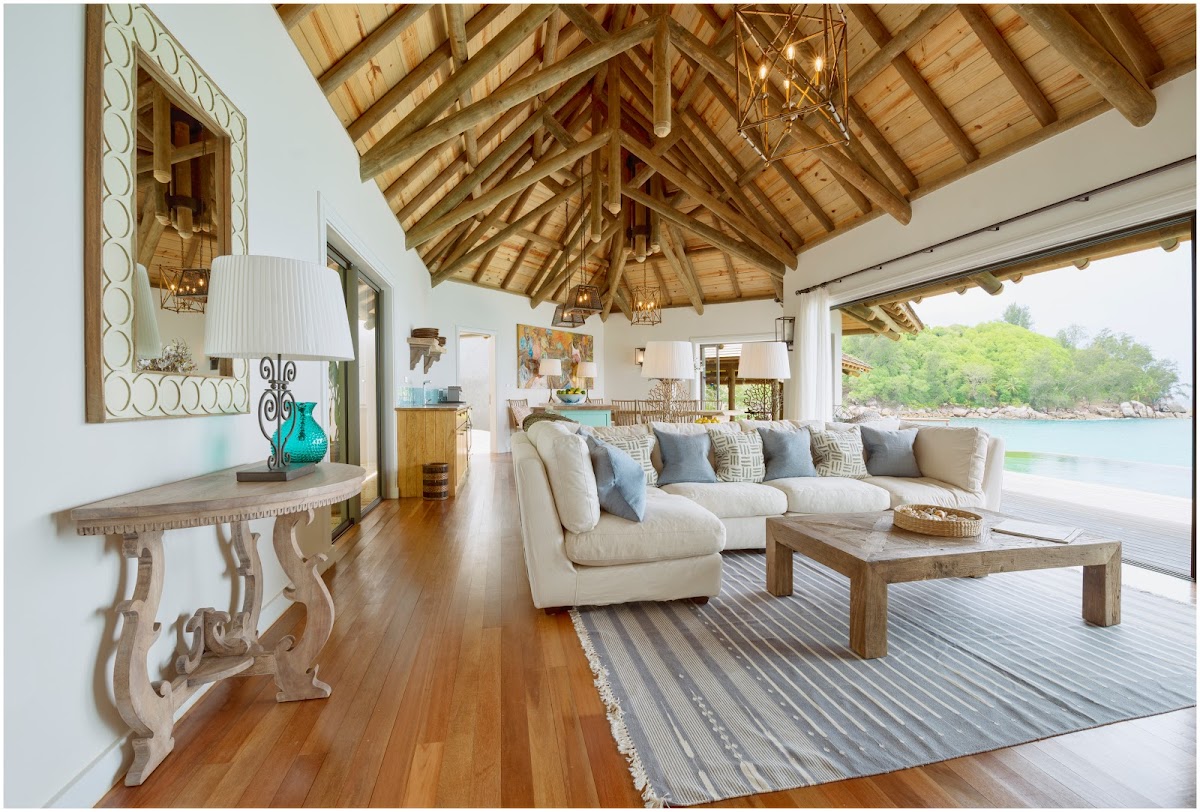 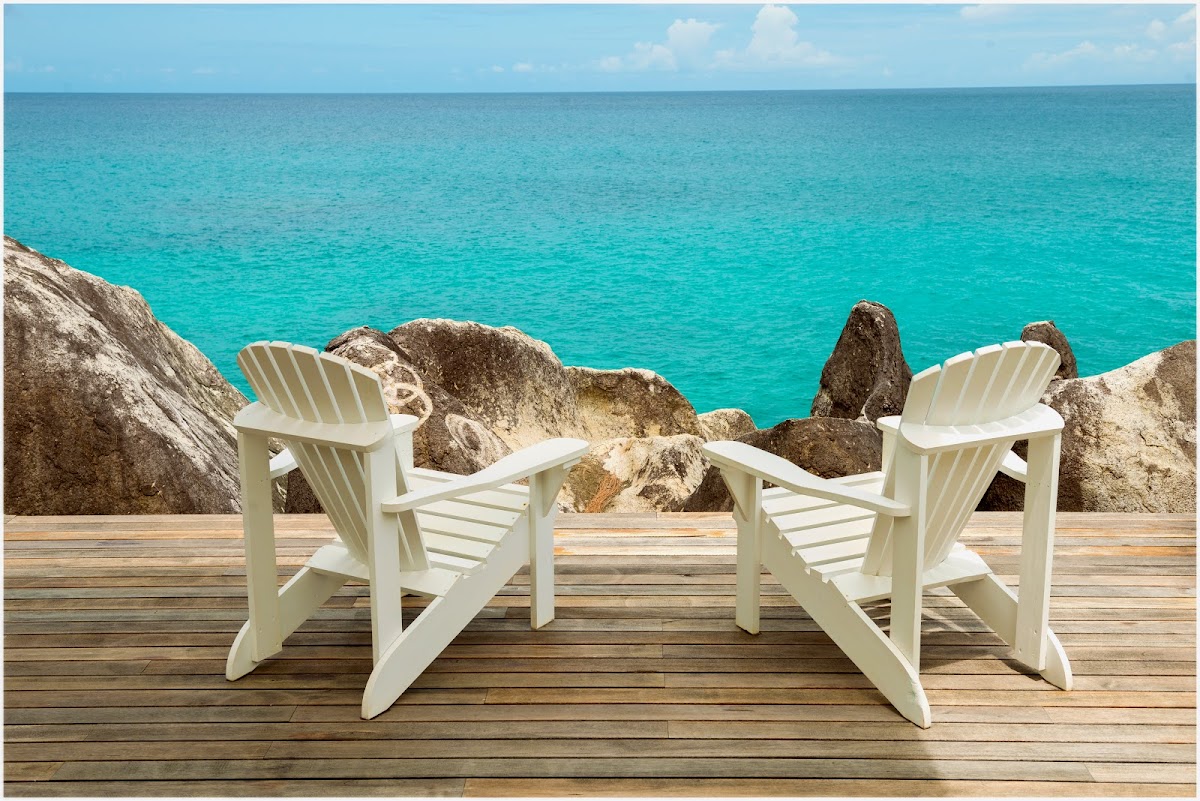 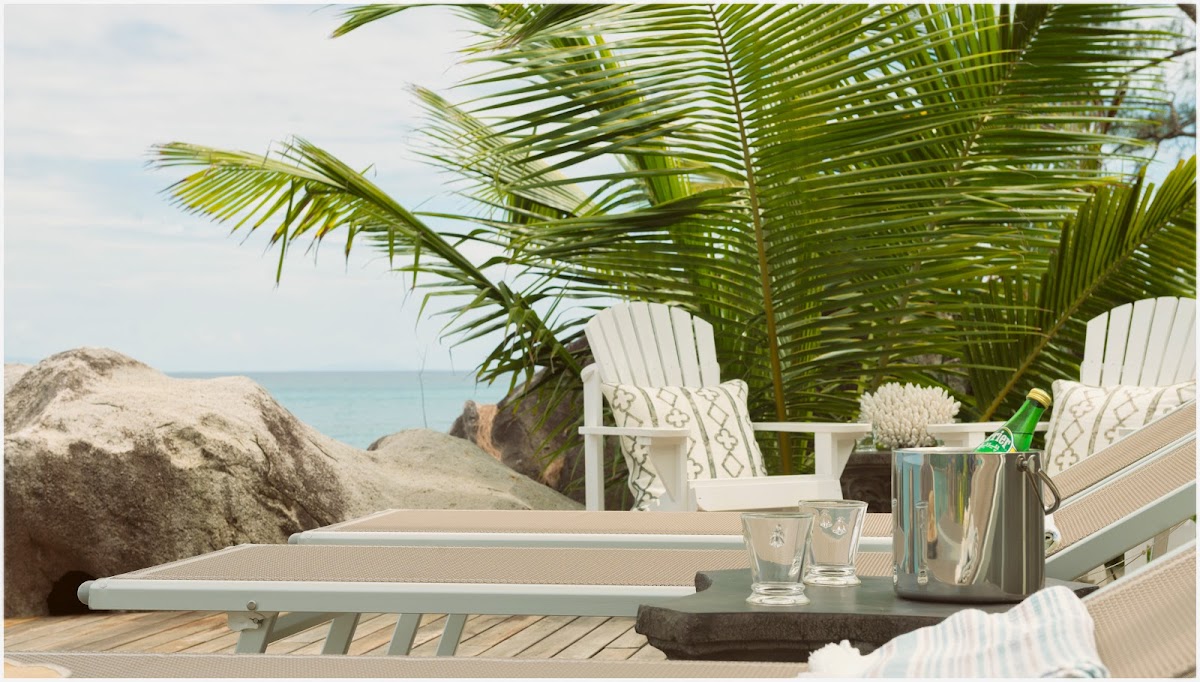 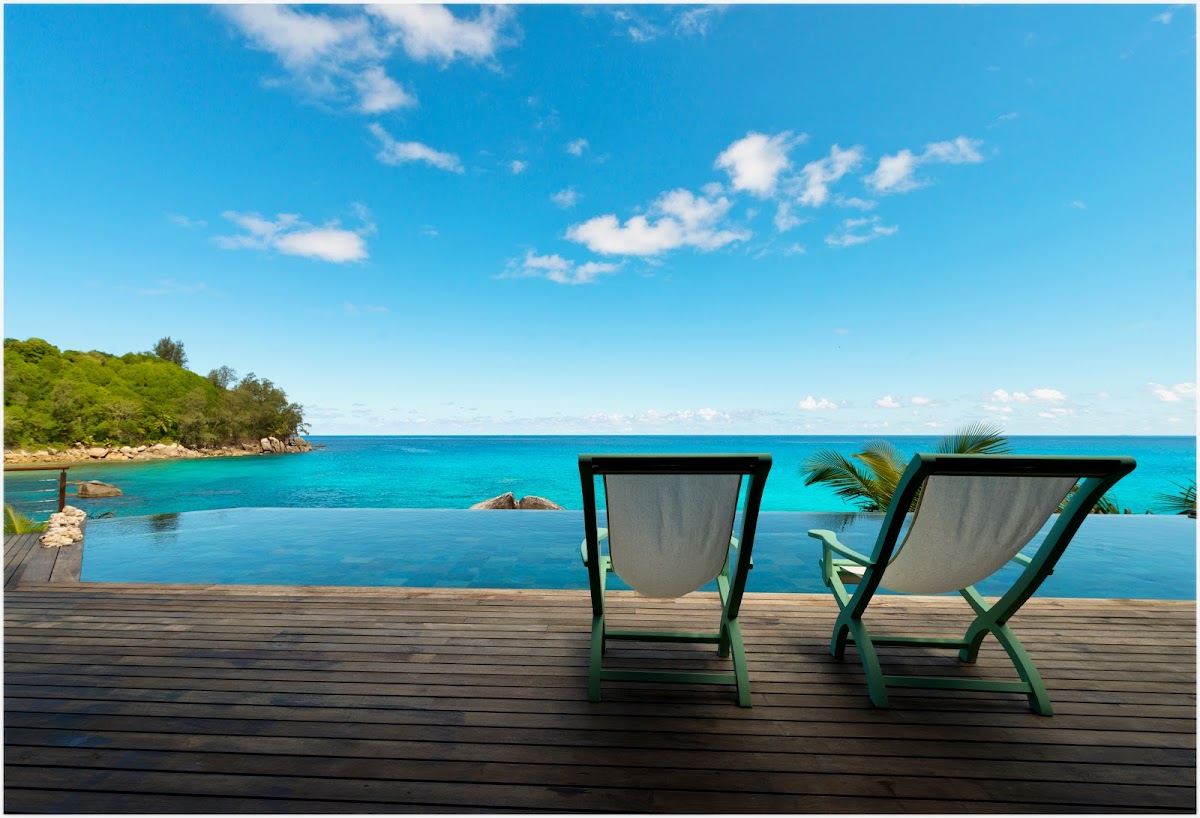 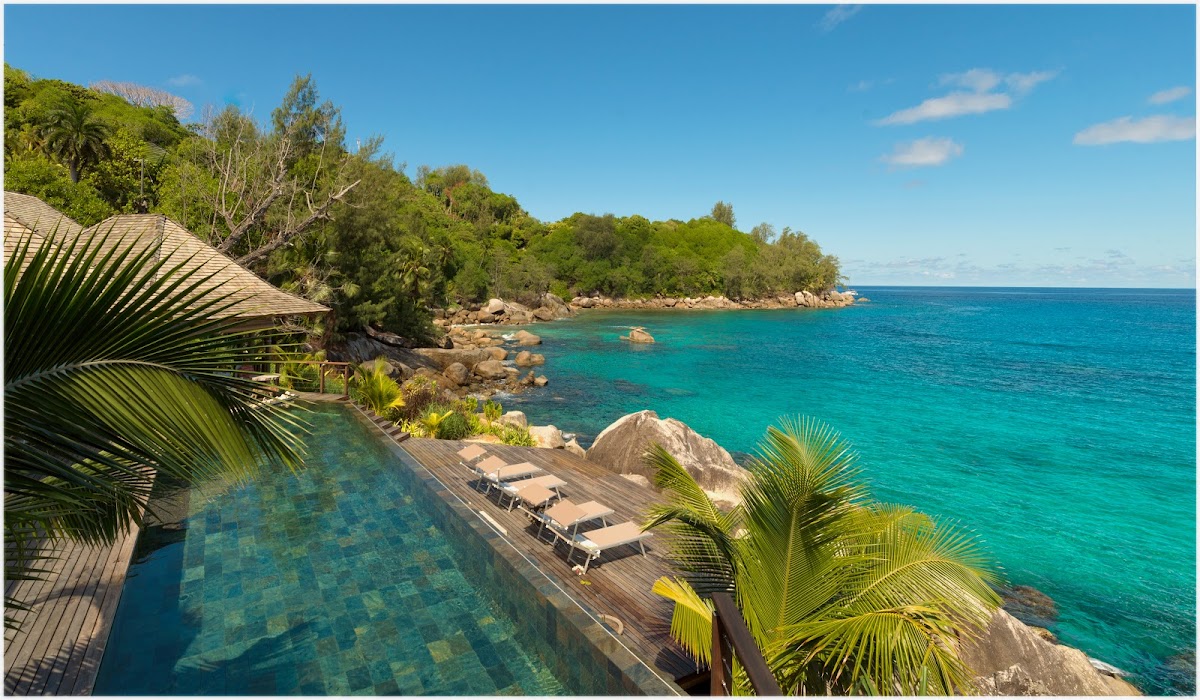 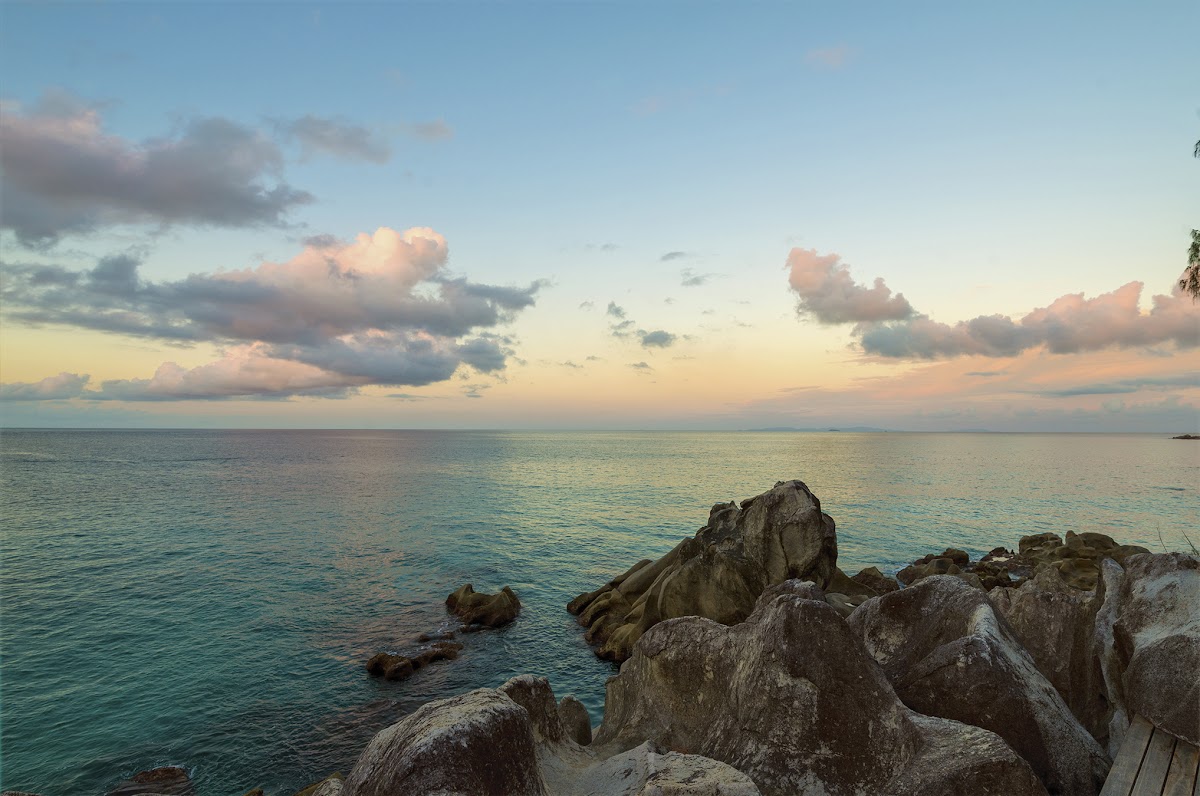 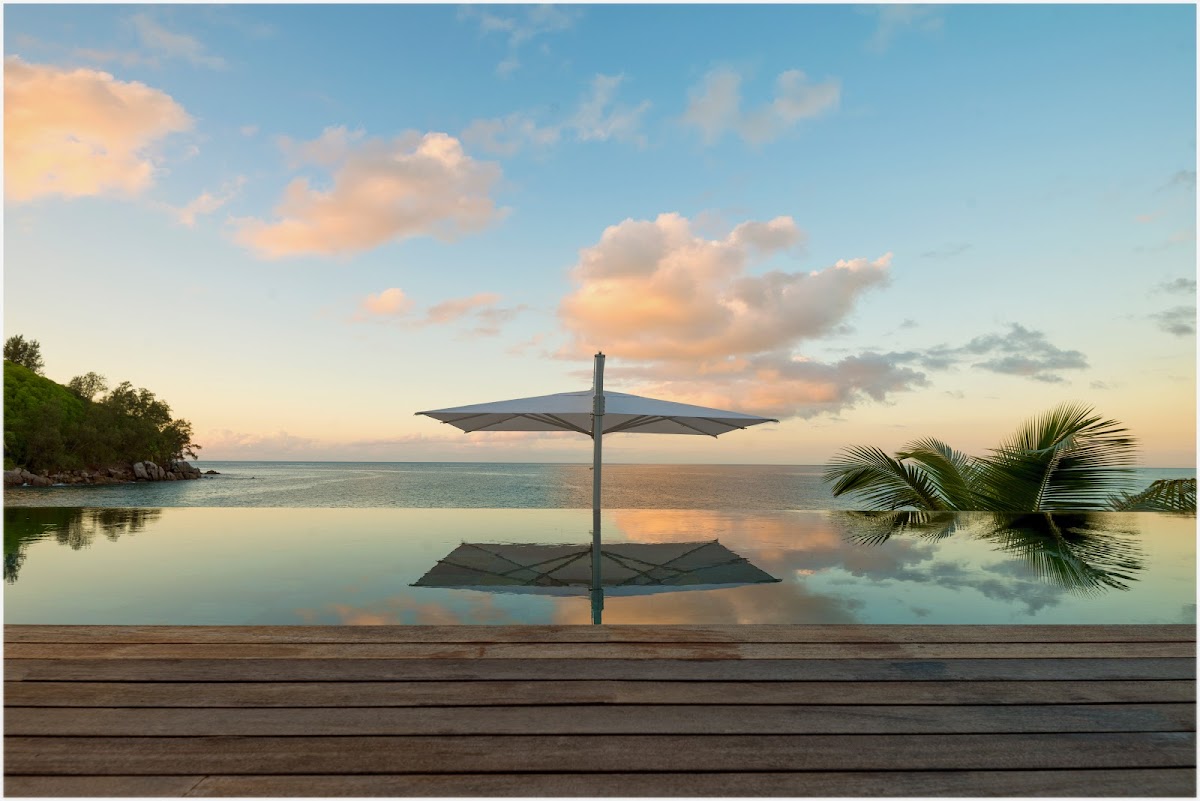 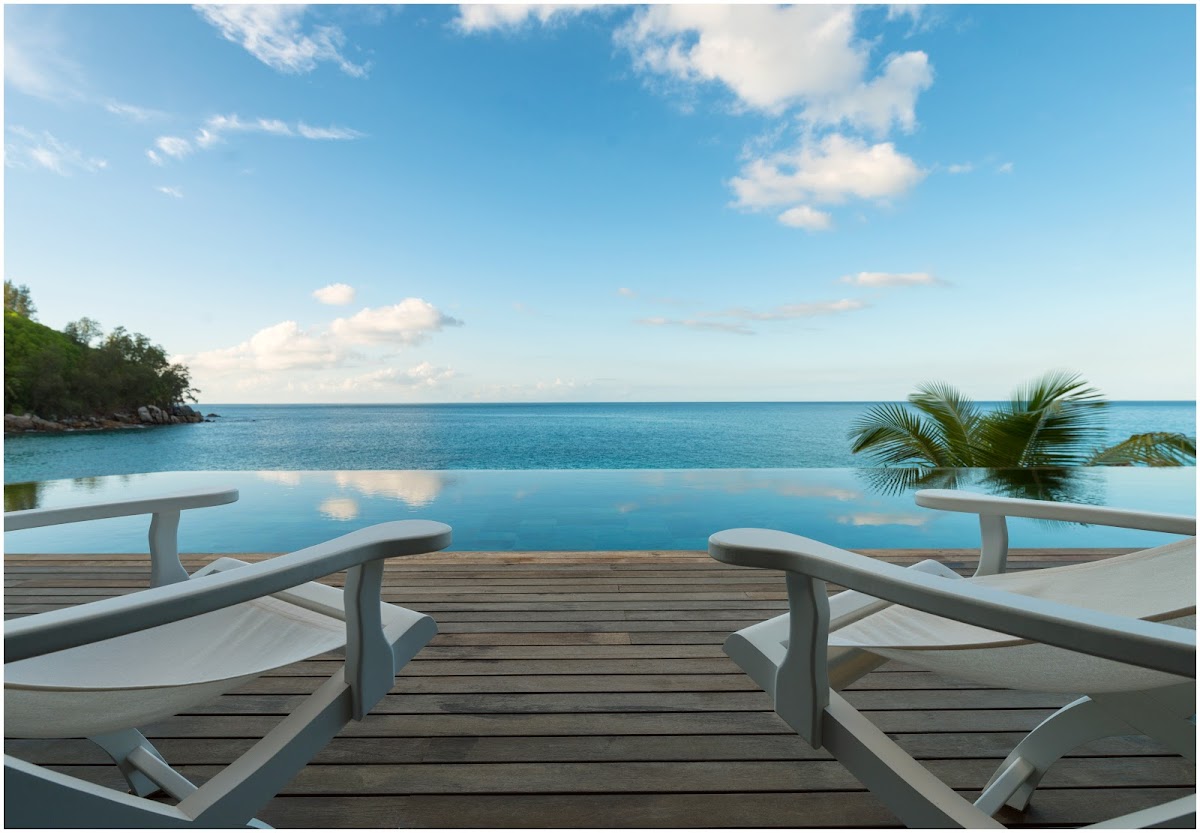 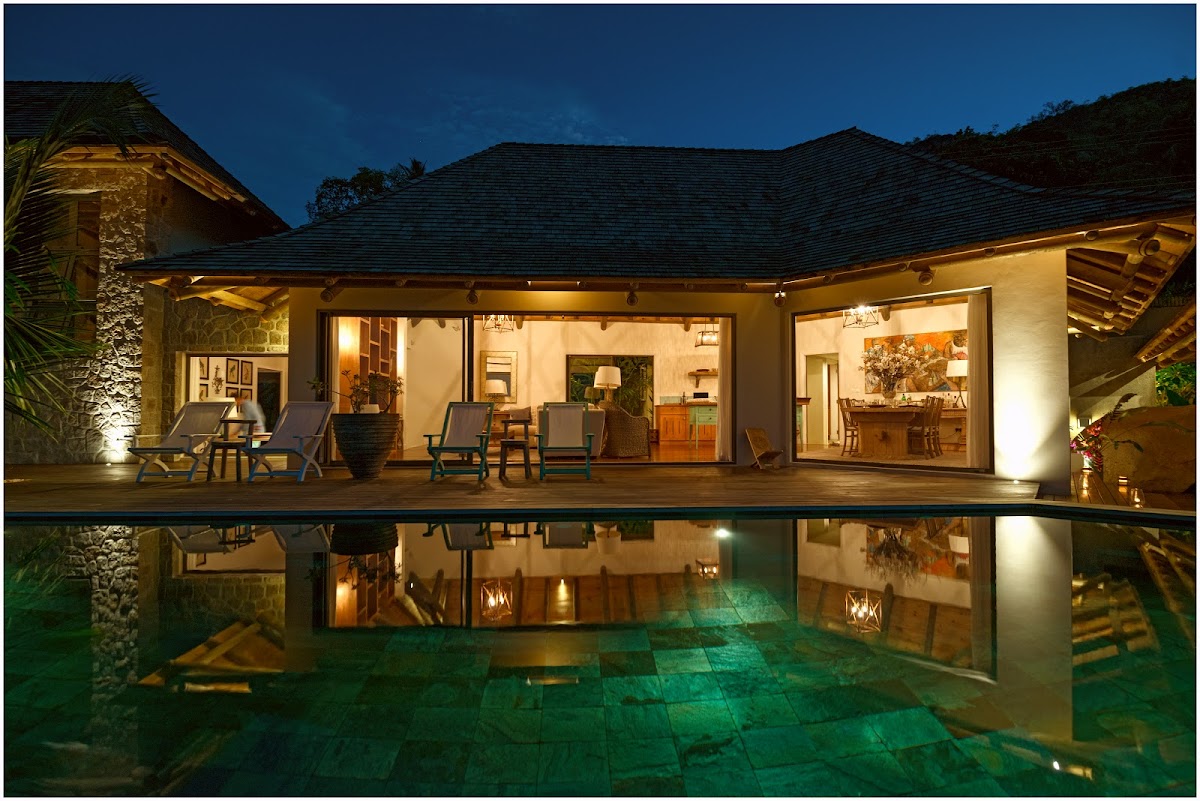 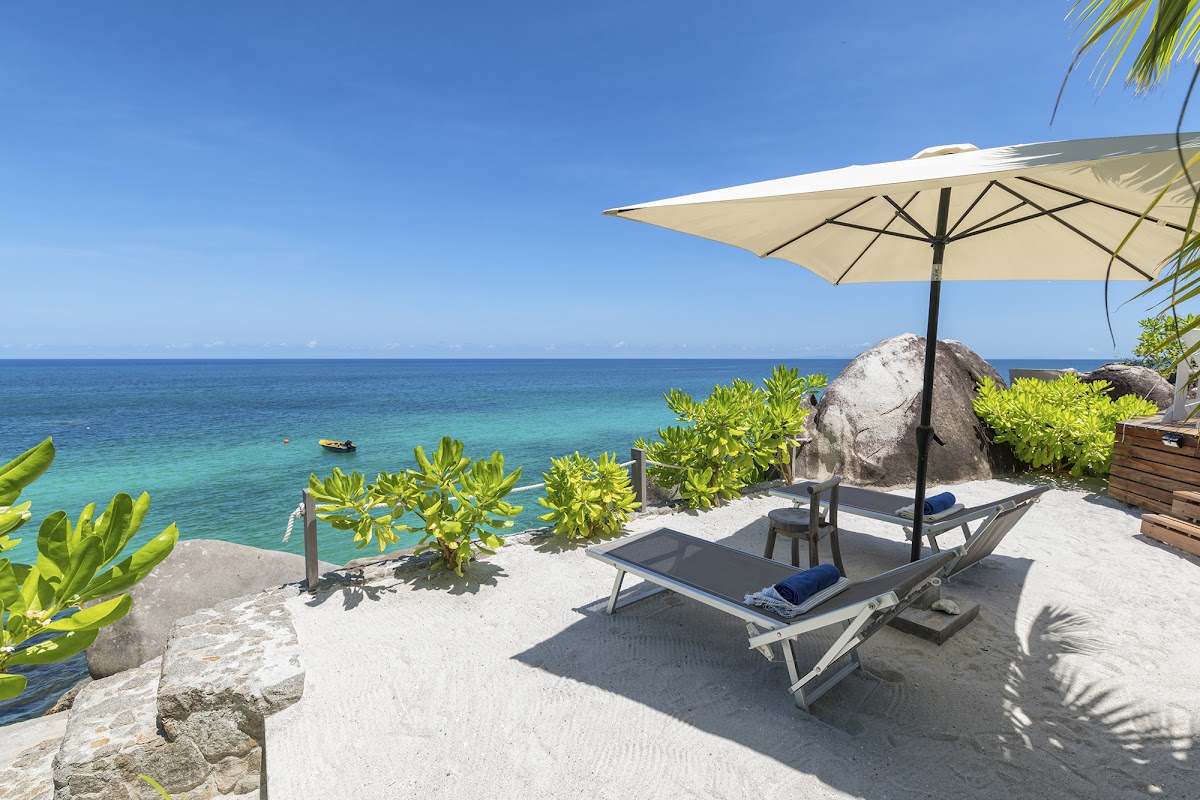 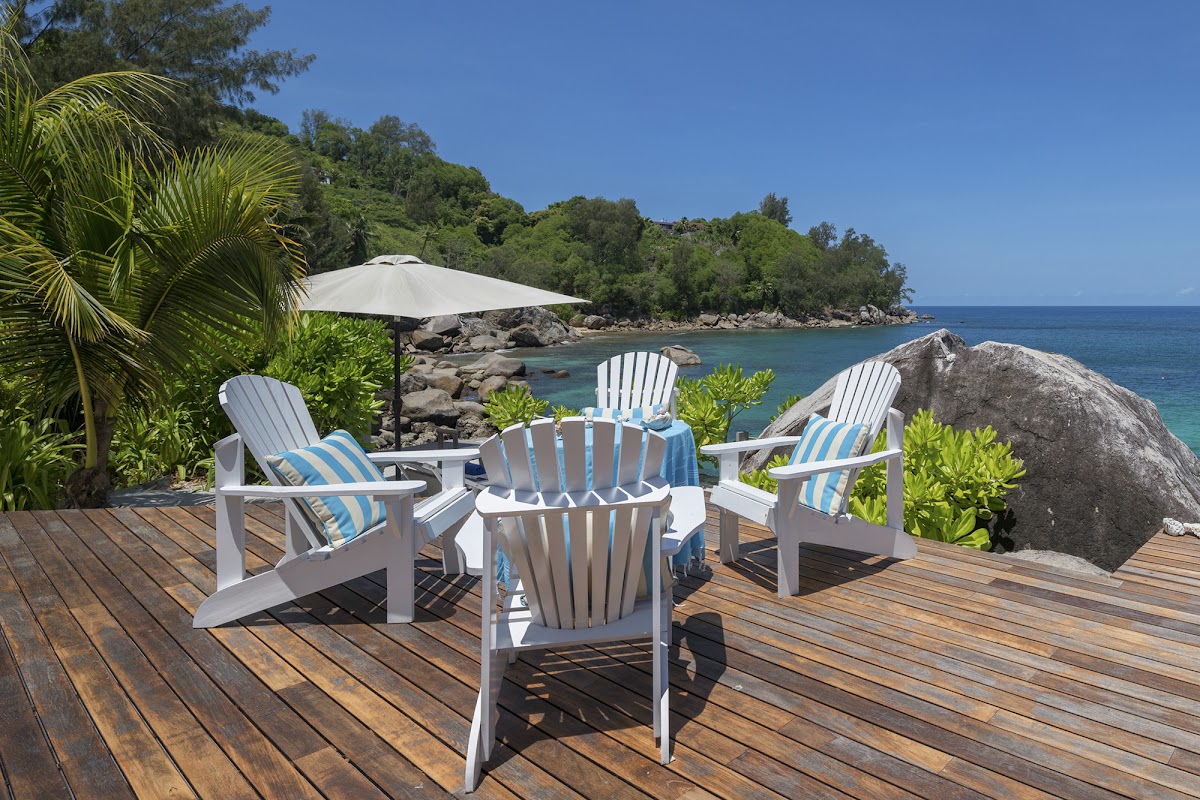 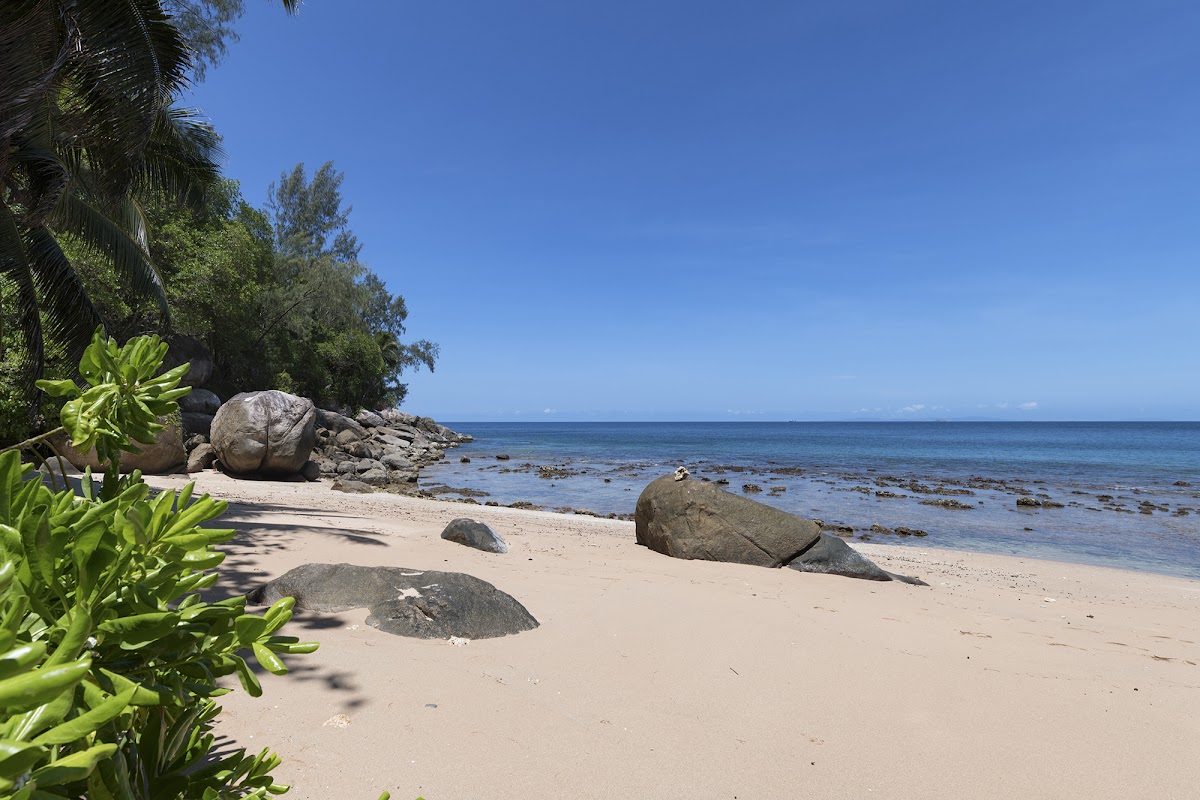 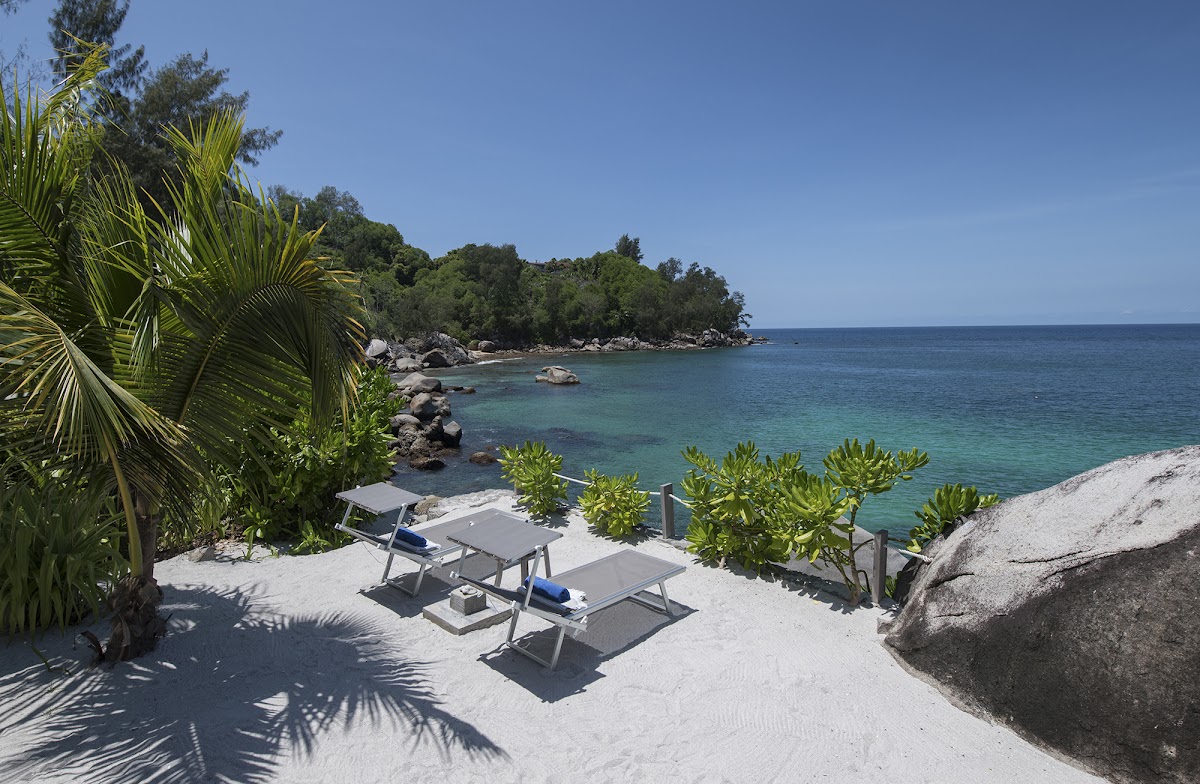 With just four rooms in total, giving guests their own breezy, beach-side home, but with all the desired services, this secluded villa is perfectly perched on its own rocky outcrop on the Northern reaches of Mahé Island. Sea Monkey Villa is surrounded by well-maintained tropical gardens, where perimeters are fringed with attractive floral margins. You’ll have direct access down to the sea where you’ll have the option to swim, kayak, snorkel, or even lazily cast a line out to try to catch a fish or two. However, if you’re seeking extra adventure or want to explore more about the islands culture and wonder, other activities and excursions are widely available to you, from visiting Mahe’s capital, Victoria, spotting dolphins in the Marine National Park or sailing over to Praslin for the day, then this is the idyllic island location for you. For unforgettable people, unbelievable views and unimaginable memories, then stay at your very own Seychelles paradise, here at Sea Monkey Villa. The villa was designed by the renowned Mauritian architect, Jean Marc Eynaud. Stretching out across 400 square metres, inside, the villa is all chic with earthy tones, plush wooden floors and grand, wooden beamed ceilings, while high glass doors slide open on to panoramic views of the quiet surrounding coves, and out across the Indian Ocean to Praslin and La Digue islands.

Marooned around 1,500km away from the east coast of Africa and surrounded by the vastness of the Indian Ocean, not many places in the world can compete with the Seychelles when it comes to beaches. Of the 115 islands that make up this beautiful archipelago, some of the very finest can be found on Mahé, from tiny coves where you’ll barely see another soul to broad strips of sand bustling with life. Villa Sea Monkey is located in the exclusive Glacis region in the lush, northernmost tip of the island, on the North Coast Road halfway between Victoria and Beau Vallon. The villa is within walking distances away from the stunning beaches known as Carana Beach and Anse Machabeé, and a 15-minute drive from the nearest town, Beau Vallon.

From the Seychelles International Airport, the drive to Sea Monkey Villa should take around 20 minutes.

In front of the villa and framing the view of the sea is Sea Monkey’s dramatic centrepiece and focal point: a 60 square metre infinity pool. Surrounded by loungers and giving onto multiple levels of wooden decking, it’s one of those rare places where time can stand still as you lie back and listen to the waves lapping on the rocks.

The villa is surrounded by 1600 square metres of lush, well-maintained tropical gardens. The perimeters are fringed with attractive floral margins and, in places, by fruit-bearing tropical trees such as avocado, bananas, chillies, patole, paw paw, red coconuts, citronelle and lime – all of which of course, make their way to the dining table.

With the temperature rarely dropping below 24°C or rising above 32°C, Mahé is a year-round destination for sun worshippers and beach lovers.

The interiors are a striking blend of traditional and contemporary, with aesthetic notes throughout that channel the surroundings and handpicked objects d’art and soft furnishings bringing a real sense of personality and individual style to every corner of the place.

Stay in one of our four rooms and awake to floor-to-ceiling views of the waves lapping up on the sculptured rocks. All rooms come with the same perks and amenities, however each room is slightly different from the last: no room overlooks another, even though they all have balconies; two rooms have high wood-beamed ceilings, while another can be fitted out with two single beds; one room even comes with its own additional outdoor shower.

Style-wise, each Sea Monkey room is individually decorated with carefully handpicked lamps, side tables, mirrors, cushions, throws and headboards made of beautiful and local Takamaka wood.

Sea Monkey’s spacious and well-equipped indoor kitchen, with an in-house chef ready to whip up anything you should fancy, ensures that all your culinary requirements are catered for in style. But with a location like Sea Monkey’s combined with the gorgeous year-round Seychelles weather, it would be a shame to spend any more time indoors than is strictly necessary. To complete cooking and dining offerings, there’s a gazebo with a lounge, bar, barbecue and a dining area all accessible by a walkway carved through dramatic granite outcrops straight from the Jurassic era.

Aside from its beautiful white sandy beaches, if there’s one thing that the Seychelles is really known for, it’s diving. We have picked out some of the best places around Mahé to do so, allowing you to experience an underwater adventure full of colour, life and wonder – a real island escapade.

Starting off gently, right down in the southwest corner of the island, this beautiful beach is a nice place to build up some confidence while seeing all manner of colourful underwater life, as the waters are shallow, calm and ultra-clear.

A great spot for snorkelling novices in the far south of the island. There’s no scary drop from the beach into deep waters, while the shore is hemmed in by a coral reef, creating a sort of calm lagoon effect around which the marine life clusters.

Just around the headland from Port Launay, and a little harder to get to, Baie Ternay is another great spot to head to see parrot fish, surgeon fish and butterfly fish along with hawksbill and green turtles amongst any number of the other usual suspects that fill the waters of Mahé.

For something a little more serious, a short boat trip out to this national park near Victoria can lead you to some of the best snorkelling Mahé has to offer.

Protected from the wider ocean by Ste. Anne Island and hemmed in by long strips of coral reef and sea grass meadows, the shallow waters between Cerf Island, Long Island and Mayenne Island abound with rays, dolphins, and Hawksbill sea turtles, who nest here, amongst the dizzying array of other tropical marine life.

For most keen divers, the Holy Grail of diving in the Seychelles is always likely to be swimming with whale sharks. These huge, illusive and slow-moving fish – which can reach up to 12m in length – can be seen all year round, and while numbers vary from year to year, they tend to grace Mahé waters from August/September to November.

A few kilometres off the northwest coast of the island lies Shark Bank, a huge granite plateau that’s one of the best places to go diving in Mahé.

As the name suggests, there are sharks on show – of the white tip reef variety typically – but that’s only the beginning of the huge array of different fish you can expect to see, from enormous eagle rays to snappers and lion fish, not to mention Hawksbill sea turtles.

On a diving trip to Shark Bank you can also get the opportunity to explore the wreck of The Ennerdale, a large tanker that sank in the 70s.

Other Popular Diving Sites In Mahé

Another popular dive site to the north of the island, expect to see brightly coloured coral banks along with rays, barracuda and nurse sharks congregating around this granite massif.

Amongst the coral and assorted anemones that line these sizeable granite rock formations, you’ll frequently spot the likes of technicoloured wrasse, parrotfish, and scuttling octopuses.

One of the best Mahé diving sites for beginners, this gently inclining coral reef is easily accessible from Beau Vallon and is overflowing with all manner of fish and turtles at shallower than average depths.

Sitting at a depth of 40m and swept by strong currents, this intact fishing boat is only recommended as a site for advanced divers. The wreck’s residents range from huge groupers and rays to Scorpion Fish and Moray Eels peeking out at you through the gloom.

Victoria Market is one of the main Mahé tourist attractions and a great place to head for an authentic local experience. Yes, there are tourist stalls selling souvenirs, knickknacks and brightly coloured sarongs, but most importantly it’s a bustling food market where you can get a slice of day-to-day Seychellois life as people noisily go about their business picking up the day’s fish, fruit and vegetables.

The island’s Botanical Gardens make for a lovely, shady spot to while away an hour or so on a hot afternoon. Located in the capital, Victoria, they’re home to some of the island’s most impressive plant life, including waterlilies and the magnificent Coco de Mer trees.

In terms of interesting fauna to keep an eye out for, you may spot Giant Aldabra tortoises that are indigenous to the islands, while the trees in the rainforest section are filled with fruit bats.

This trek up Mahé’s highest peak is a must if you’re a keen walker looking for a challenging day’s climb. Picking up the trail in a layby on the Sans Soucis Road on the edge of the Morne Seychellois National Park, it takes around five hours in total to scale and descend the 905m (3000ft) mountain.

Not one for the fainthearted, this walk takes you up through dense jungle teeming with wildlife and over massive granite promontories (which can be slippery after rain). Suffice to say, the panoramic views from the top are absolutely sensational.

A little further down Sans Soucis Road from the starting point of the Morne Seychellois hiking trail, this 19th-century mission is one of the highest points on the island that you can reach by car.

Surrounded by dense forest and opening out on to dramatic views, it’s a beautiful and atmospheric spot with the ruins of the old Venn’s Town with a former school for the children of freed slaves.

There are no fewer than 115 islands in the Seychelles, so if you’re planning on a slightly longer stay on Mahé, it makes sense to see at least one other. At just over an hour’s boat ride away, a day trip from Mahé to Praslin is a great way to explore another part of the archipelago.

The second largest of the Seychelles’ islands, beaches aside, the main attraction is the Vallée de Mai. This national park and UNESCO World Heritage Site is a vast, primal and almost mystically beautiful forest full of giant Coco de Mer palms and the home of the rare Black Parrot.

If you consider yourself a bit of a golfer or just simply enjoy the sport, Mahé’s golf course is open to and welcomes visitors, whilst also offering club hire. With only nine holes, while it’s far from a championship course it makes for a lovely day out surrounded by the suitably stunning scenery of a former coconut plantation turned wildlife sanctuary.

It’s a challenging round, too, with lots of tight approach shots, plenty of hazards and a lack of run from heavy fairways. There are also other idiosyncrasies caused by the natural surroundings, not least of which are the red crabs you will frequently run into should you find yourself in a bunker.

As the villa is rich in fruit-bearing tropical trees, it only makes sense that all of which, make their way to the dining table. The Sea Monkey Villa utilises their fresh and on-site, locally sourced ingredients to create spectacular, tantalising meals making your dining experience all the more special.

Sea Monkey welcomes families with children, however requires a waiver to be signed by the parents of children less than 10 years of age