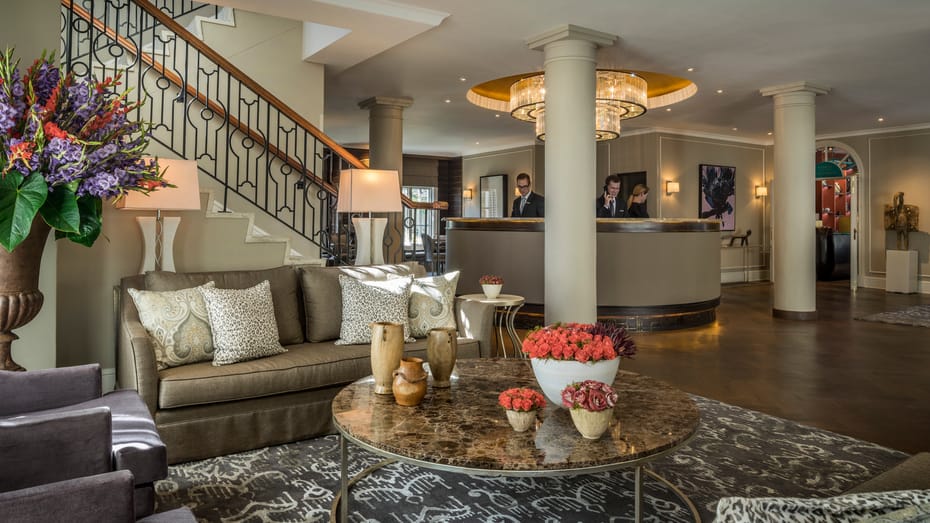 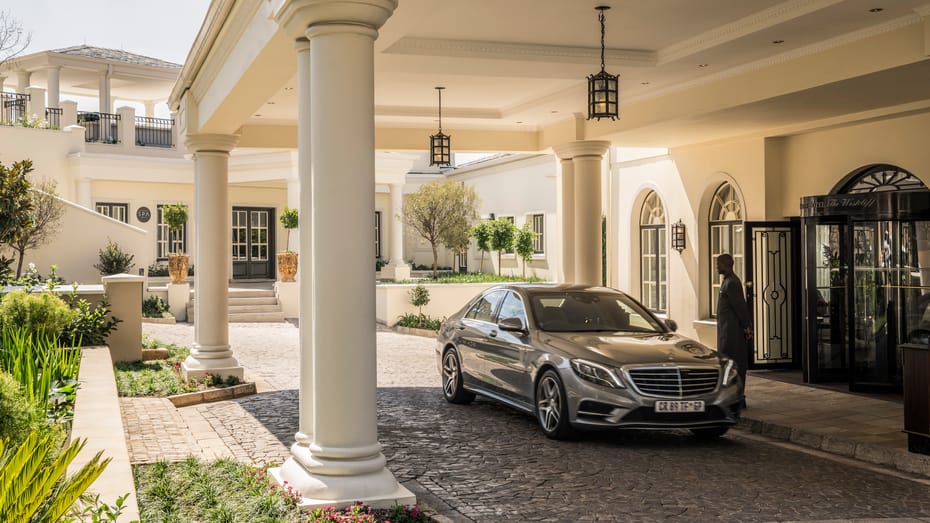 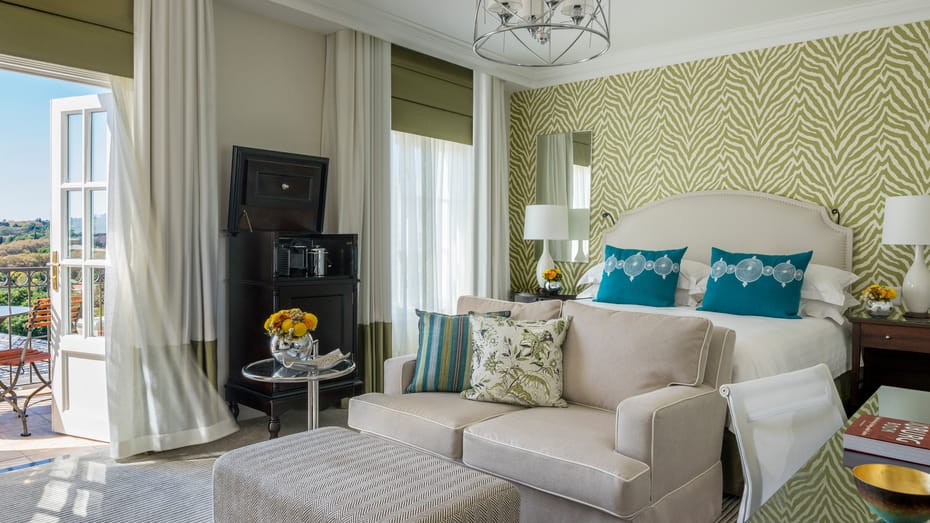 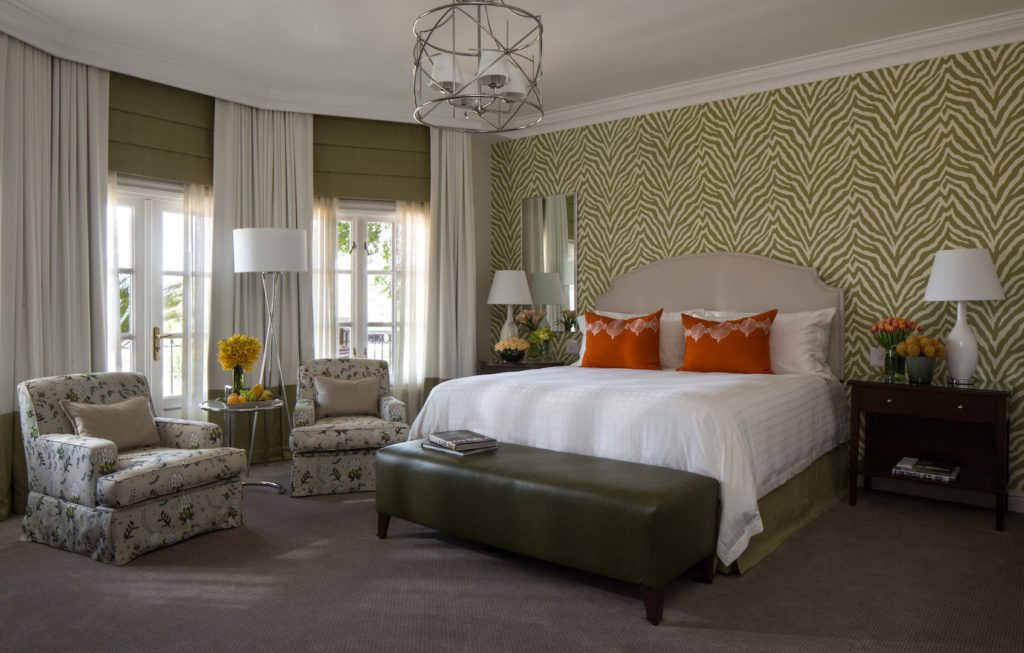 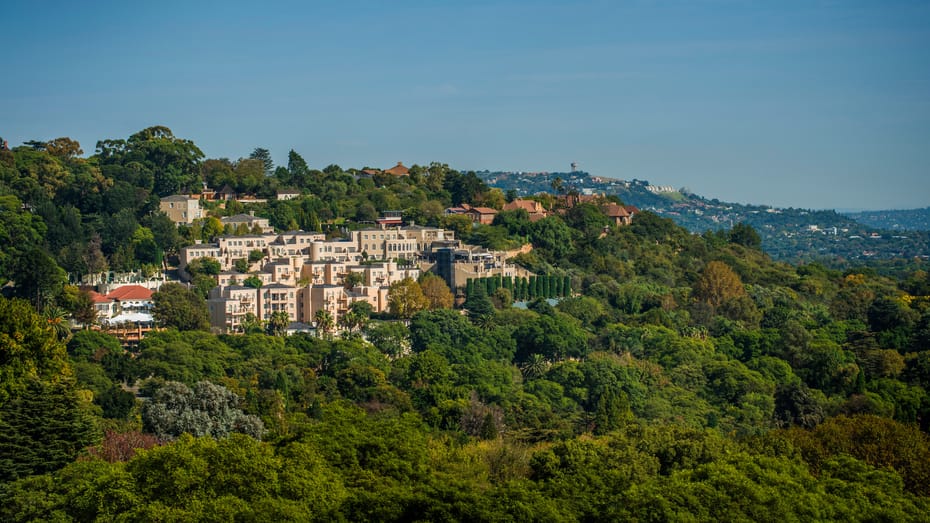 Get a taste for southern Africa in an adventure like no other, combining the urban excitement of Johannesburg, the heart-pumping thrill of safari and the perfect island beauty of Mauritius. This voyage will take you from a buzzing melting pot of culture into the heart of nature. Hunt for the Big Five in andBeyond Phinda Game Reserve’s seven distinct habitats before touching down on the white sands of Mauritius for a taste of idyllic ocean life.

Dive into South Africa with your first destination, the pulsing city that locals affectionately call Jozi. In recent years the creative scene has exploded here, filling the tree-lined city with cosmopolitan districts containing countless things to do. Check out artisan food markets in Braamfontein, visit late-night jazz haunts or learn about South Africa’s history in the Apartheid Museum. A tour of the township Soweto comes highly recommended, where you can walk the streets in which Nelson Mandela and Desmond Tutu once lived. Four Seasons Hotel, The Westcliff is the perfect base for your adventure, offering an incredible view of the jungle of tress and streets that make up the city. It’s close to Johannesburg’s most lively districts, but there’s also plenty to do without even leaving the grounds. Your Garden View Deluxe Room with en suite will ensure a luxurious stay.

Leave the city behind and step into the bush for the next part of your adventure. You’ll spend your mornings and afternoons on game drives in one of the best reserves for meeting cheetahs. Explore the unique local ecosystems on specialist walking safaris or set off to track black rhinos. This exclusive reserve is home to seven distinct habitats with their own flora and fauna to encounter. The reserve’s proximity to the coast and Sodwana Bay provide the opportunity for scuba diving, fishing and even turtle watching. You’ll stay in an elegant suite at the award-winning Phinda Forest Lodge, an ecologically sensitive oasis of luxury. Indulge in the rim flow swimming pool, dine beneath the traditional African boma or step out onto your private viewing deck and drink in the natural beauty of South Africa.

The last leg of your journey offers yet another change of scene – shimmering sands and seas brimming with marine life. Here you can go at your own pace – lounge on the stunning Ile aux Cerfs, pique your curiosity at the country’s largest open-air market or take the plunge into one of the array of water sports available. Make the most of the crystal waters with glass-bottom boat rides, a kayak trip to Citron, stand up paddle-boarding, windsurfing and water-skiing just a handful of the options available. There’s no end to adventure here, and no end to luxury during your stay at The Oberoi Mauritius. Situated within 15 minutes of the capital, facing onto 600 metres of pristine beach and near to a protected marine park, this is the perfect location. A host of delectable dining and pampering activities are available and the hotel’s stylish historical flavour will make you not want to leave.

Arrive at O.R. Tambo International Airport to a warm welcome from a member of the andBeyond team. From here you will be transferred to Four Seasons Hotel, The Westcliff to begin your holiday. Your Garden View Deluxe Suite looks out onto the vibrant expanse of the city. Head off into Johannesburg’s markets for a taste of fresh, local delicacies or take in the art scene at one of the many galleries. The hotel has stunning gardens, a spa, two heated swimming pools and if you listen carefully, you might just hear the trumpet of an elephant or the roar of a lion from the neighbouring city zoo.

After a delightful breakfast, embark on your second day in South Africa’s metropolitan heart. The city is your oyster! Johannesburg is rich in political history, and touring Soweto is considered a must by many. The Hector Pieterson Museum is found here, and the Apartheid Museum is authoritative for 20th century African history. If Johannesburg is one thing, it is diverse, and you can choose to fill the day with unique experiences that range from wandering indigenous gardens, perusing eclectic street art, and sampling the international fare on offer in the buzzing Maboneng district. Or take the short drive to nearby UNESCO-protected Cradle of Humankind and Sterkfontein Caves. 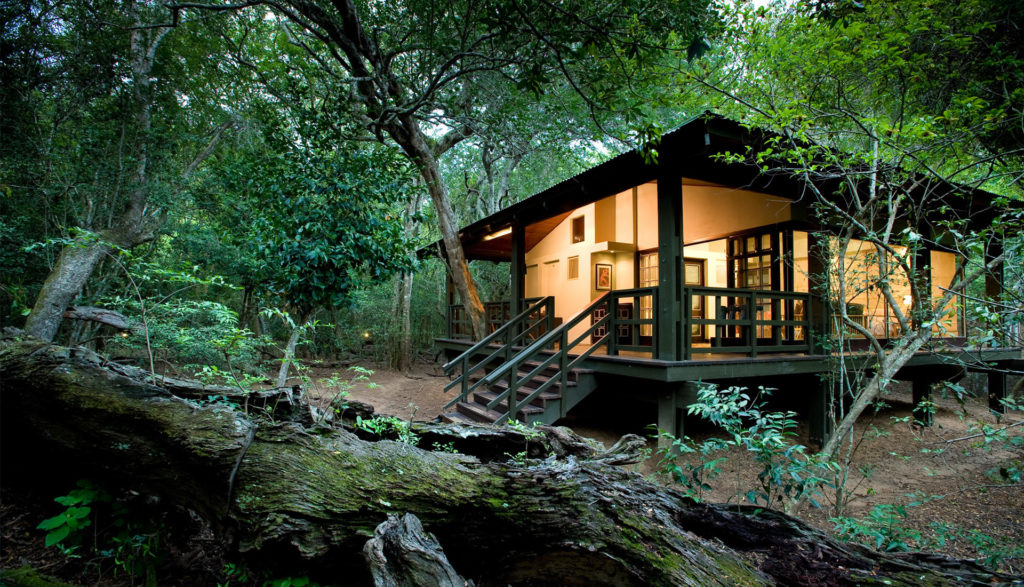 Prepare to head into the bush! After breakfast, you’ll take a private transfer from your hotel to OR Tambo International Airport for a flight to Phinda Airstrip via Nelspruit – with assistance from the andBeyond team all the way, of course. Arrive in the andBeyond Phinda Private Game Reserve and let the sights and sounds of the South African bush wash over you. Settle into your comfortable suite, reawaken your soul and get ready for adventure.

Set off into the wild with a one-hour nature expedition with seasoned guides. Explore the different, rich ecosystems of the park and take in its rare and beautiful flora and fauna. There are plenty of ways to get close to wildlife here to choose from, even including scuba diving, fishing and turtle viewing.

Get your safari on! Morning and afternoon game drives at Phinda are once-in-a-lifetime opportunities to truly get up close and personal with the Big Five and countless other animals, including excellent chances of cheetah and black rhino encounters. There are only a handful of lodges sharing Phinda’s 23 000 hectares, and with expert rangers and trackers you are guaranteed an exclusive and special game viewing experience.

Your last full day in the beauty of the Phinda Reserve is yours to make special. Take a tour of a fascinating local Zulu village, or make the most of the wildlife around you with a specialist walking safari or black rhino tracking experience. If the seas are calling, take advantage of the park’s location by Sodwana bay to familiarise yourself with the marine life by going snorkelling or on a scuba dive. And don’t forget to soak up the natural beauty of andBeyond Phinda Forest Lodge, relaxing in the pool or hearing intriguing stories from your experienced hosts. 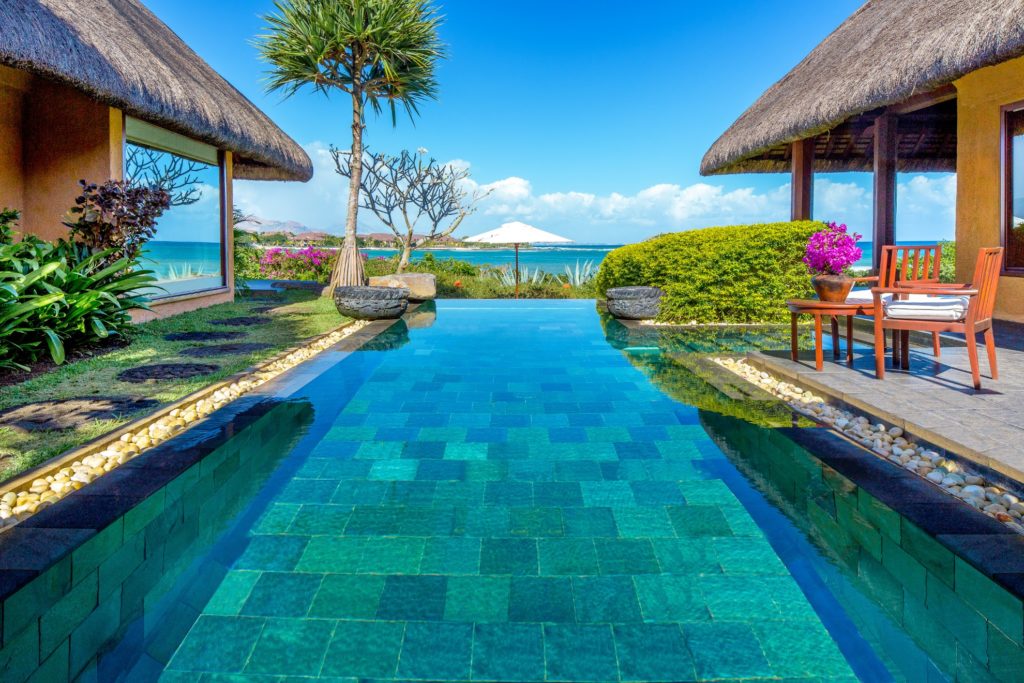 After a sumptuous breakfast, you’ll board a charter flight from Phinda Airstrip to King Shaka International Airport and fly on from there to Sir Seewoosagur Ramgoolam International Airport. A short road transfer to The Oberoi Mauritius and you’ve reached the gorgeous beach destination where you’ll spend the rest of your holiday. You’ll quickly fall in love with the uniqueness of island life and its easy sway between excitement and pure relaxation. Grab your beach towel and settle in for four nights in a Luxury Pavilion.

Wake up to an ocean view and prepare for a day on the water! Scheduled activities include marvelling at the sea-life on a glass bottom boat ride, kayaking up the Citron river and stand up paddle-boarding. Day 9 offers windsurfing, glass bottom kayaking, hobie cat sailing and pedalo. If you haven’t already considered giving everything up to become an islander, today you will.

But the excitement doesn’t end there. Venture to the nearby Port Louis and explore the profusion of culture that fills the streets. Mauritius’ capital is considered one of the world’s best cities for street food, with influences from Africa, India, China, Europe and the Middle East. Chinatown has a long history and buzzing atmosphere, with a food and cultural festival happening between April and May each year. For the inquisitively minded, both the Blue Penny Museum and Natural History Museum offer fascinating experiences getting to know the country’s art and history and wildlife respectively.

As the sun sets, head to Port Louis Theatre to take in some jazz or a Mauritian drama. The Jardin de la Compagnie is the beautiful central garden and offers cooling strolls beneath the broad beams of banyan trees. Meanwhile, the UNESCO World Heritage Site Aapravasi Ghat, is the remains of the immigration depot where the world’s first indentured labourers arrived from India, East Africa, Madagascar, China and South East Asia arrived to work in the British Empire. Over half a million people migrated to this important site, shaping Mauritius’ modern day culture.

Day 10 is yours to do whatever you haven’t done yet – or more of the same! Mauritius is an island begging to be explored, featuring Indian temples, botanical gardens and colonial houses. The hustle and bustle of the Flacq open-air market makes for a thrilling day out, while the gorgeous rare birds and dolphins that make Mauritius home provide plenty to occupy nature-lovers. There are also endless action sports available for the adrenaline-inclined and beautiful walks for those wanting to explore the island on foot. The Oberoi Mauritius provides a taste of history itself, housing a defence battery that dates back to the French colonial period.

Following one final, delectable breakfast, you will take a private transfer from your hotel to Sir Seewoosagur Ramgoolam International Airport. From here you’ll fly to O.R. Tambo International Airport where we’ll bid you a fond farewell before your onward travel arrangements.

Please contact us to arrange your preferred dates of travel

Johannesburg
Since its beginnings as a gold town, Johannesburg has undergone multiple transformations, becoming what is today one of Africa’s most buzzing cities of art and culture. Theatres and museums jostle with markets and food stands, and offerings come from all around the world as well as Africa. Of course, meat-eaters in particular will be hard pressed to find better dining options. Johannesburg positively radiates energy and there is always something to do, no matter the time of day. Kwa Mai Mai muti market typifies the city’s culture of traditional medicine sellers and gives a great introduction to the fabric of Johannesburg. Be sure to pick up locally made handicrafts and sample the delicious fresh fruit juice readily available throughout the city.

andBeyond Phinda Private Game Reserve
As well as being known for cheetah and black rhino sightings, the Phinda Game Reserve is home to 436 bird species and the Big Five. Its seven distinct environments comprise woodland, wetland, grassland and forest interspersed with mountain ranges, rivers, marshes and pans. It’s also home to 1,000 hectares of rare dry sand forest and lies close to the coral reefs of the Indian Ocean.

The reserve actively protects cheetah, rhino and pangolin and andBeyond have worked to preserve the critically endangered ancient sand forest. The reserve works alongside Africa Foundation to employ locally and invest in local communities. Sustainability is central to their mission.

Mauritius
Volcanic mountain vistas and white sands, set in the balmy Indian Ocean? Say no more. Mauritius combines idyllic beaches, lush nature and a rich history. Beyond the beaches there is hiking to be had in the island’s verdant interior, or stunning islets and incredible diving locations just offshore. The Black River Gorges are a fabulous national park home to rare species like the pink pigeon as well as macaques, parakeets, deer and more. With a long and varied colonial past, Mauritius’ culinary offerings reflect a cacophony of influences. Think curries, the freshest of seafood, French cuisine and classic creole fare. And don’t hesitate to stop at one (or several!) of the food stalls that populate the roadside. 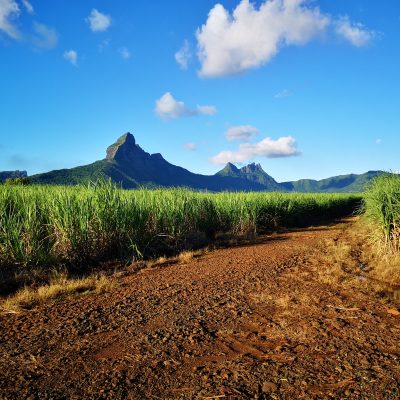 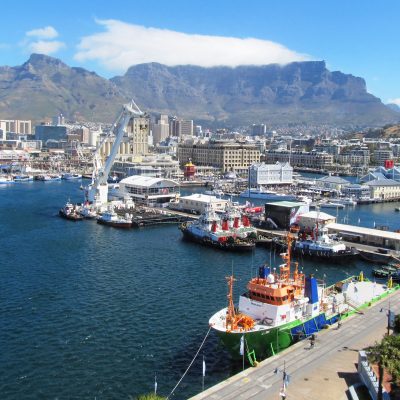