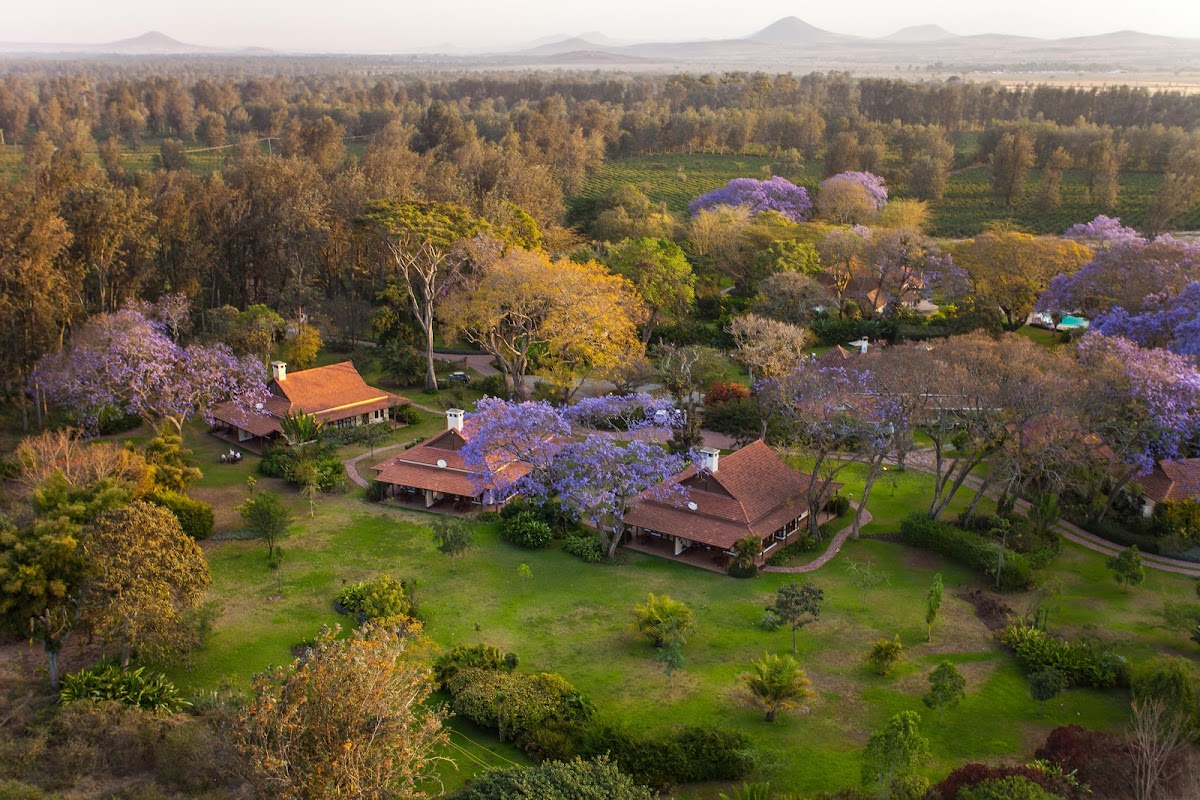 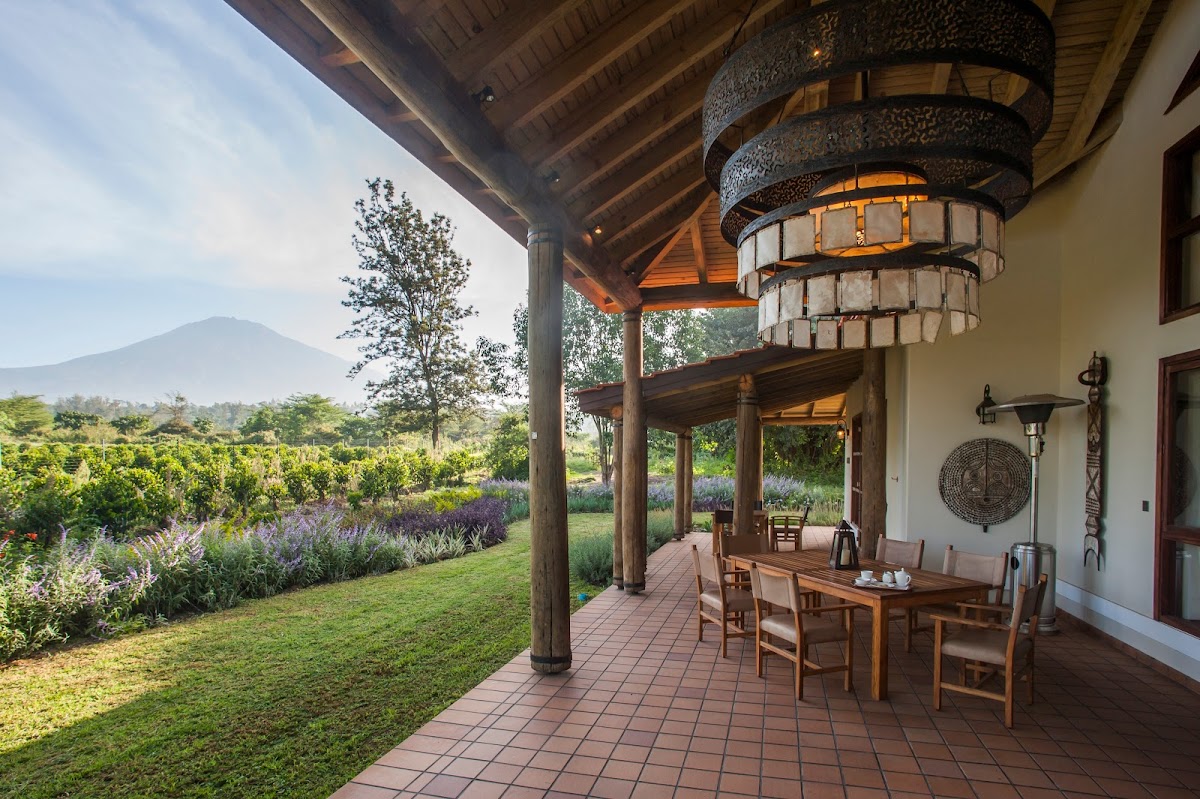 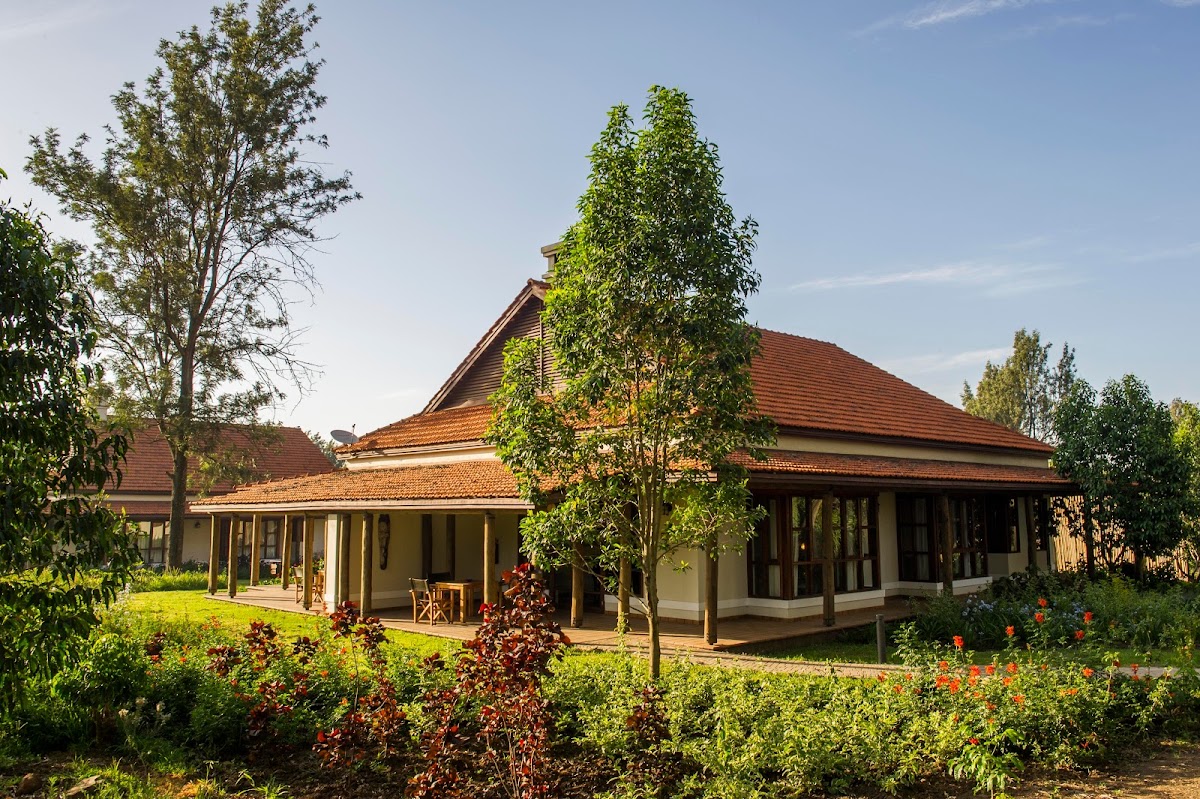 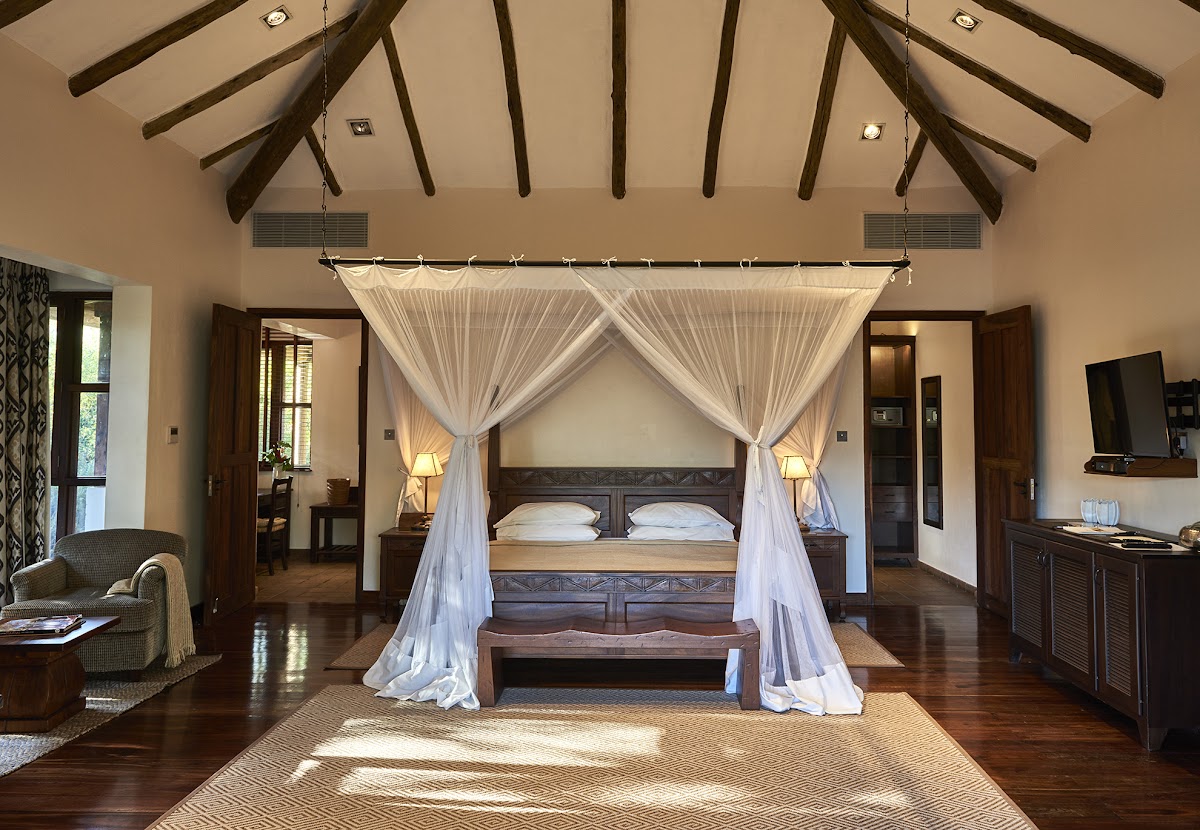 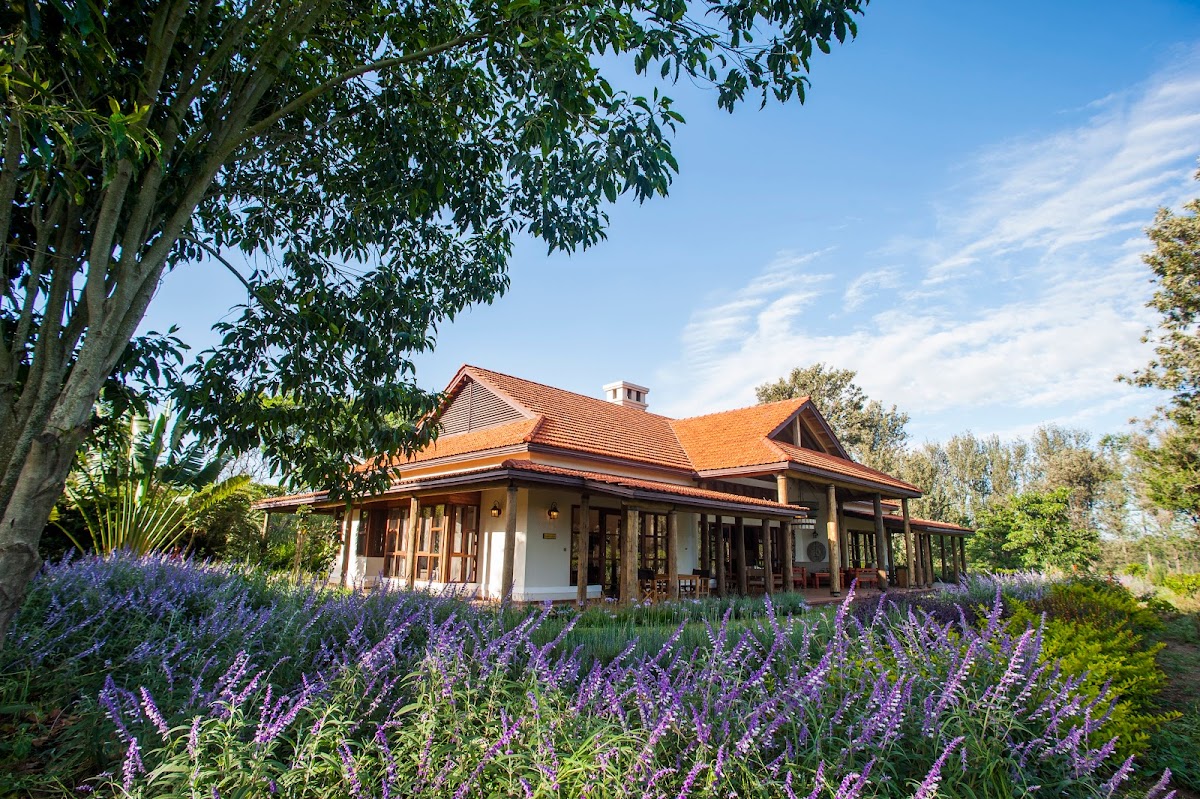 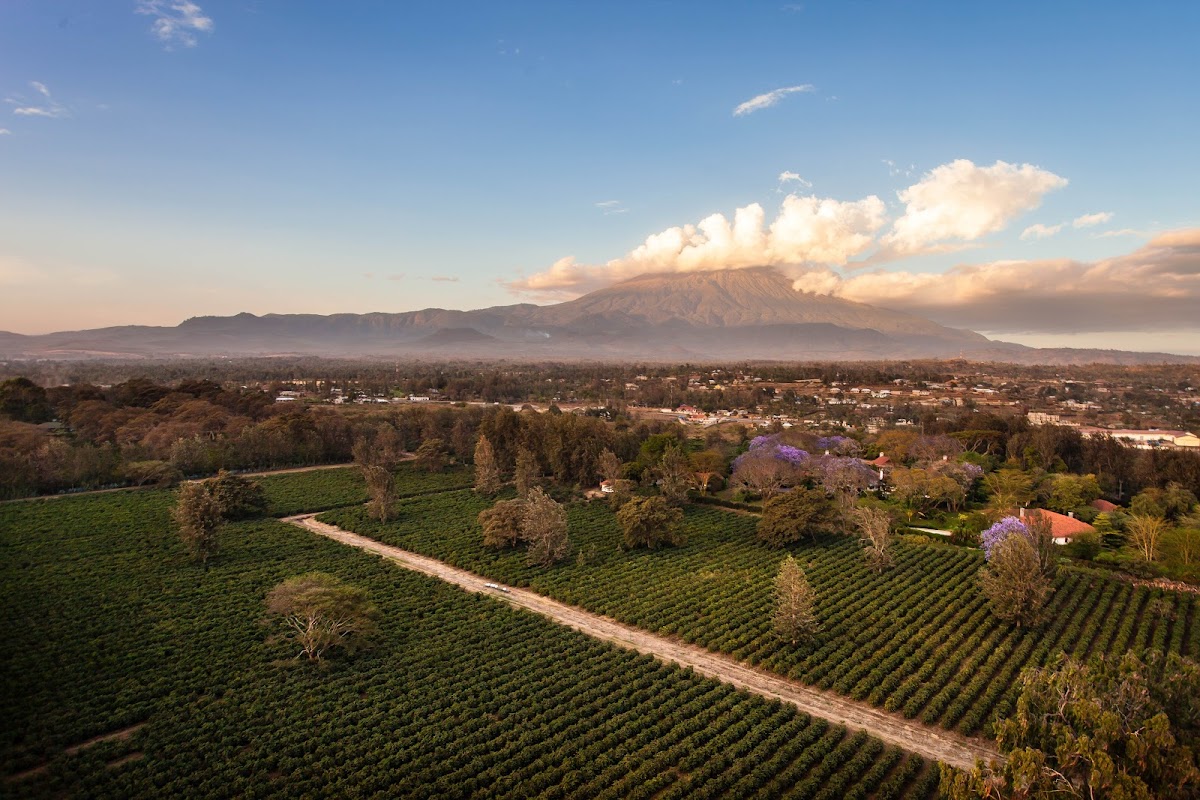 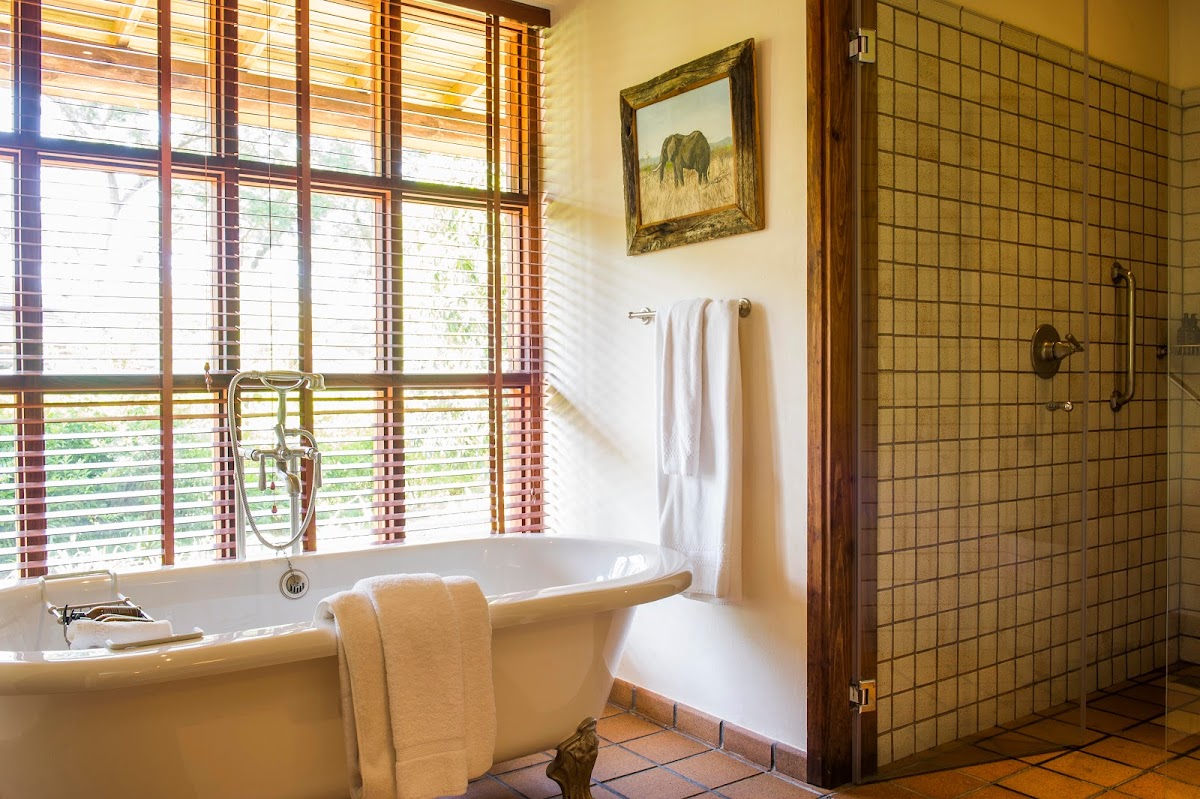 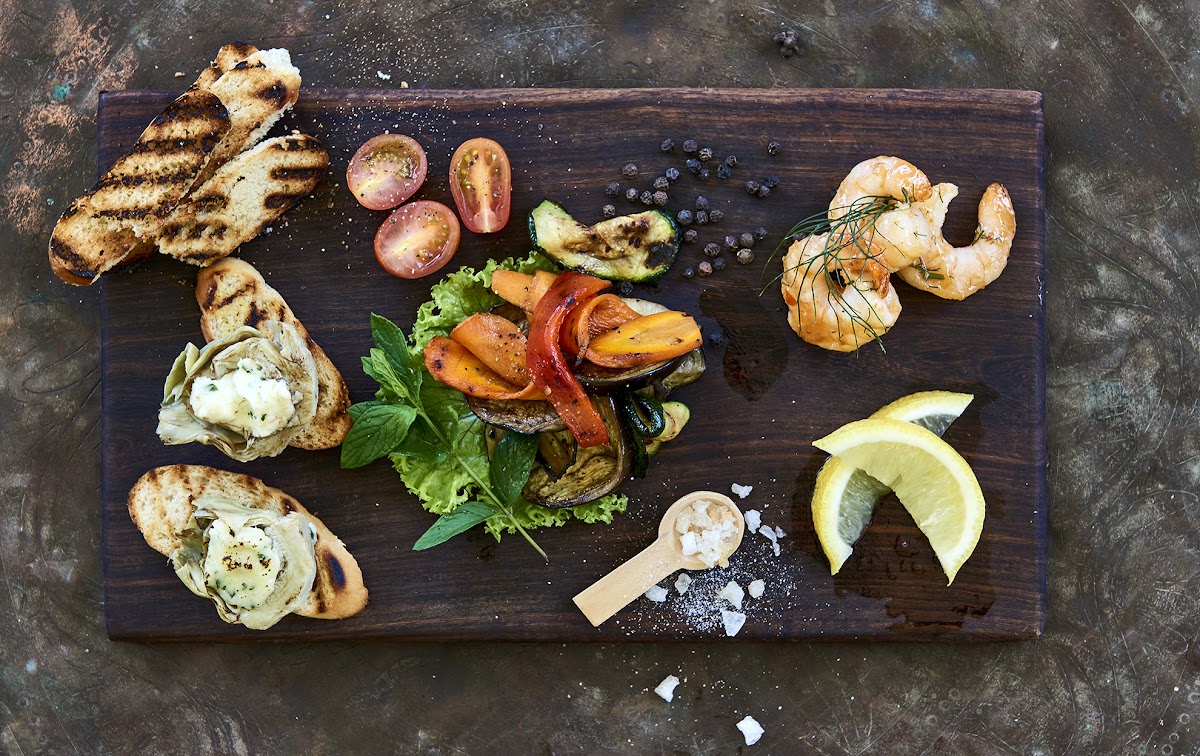 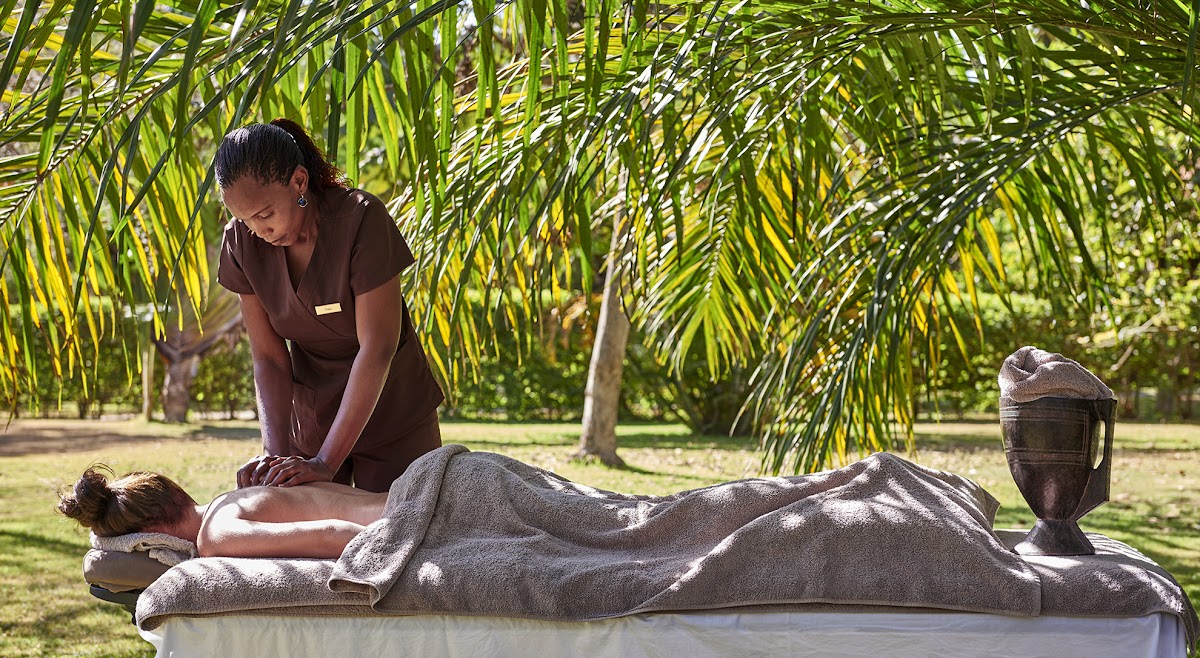 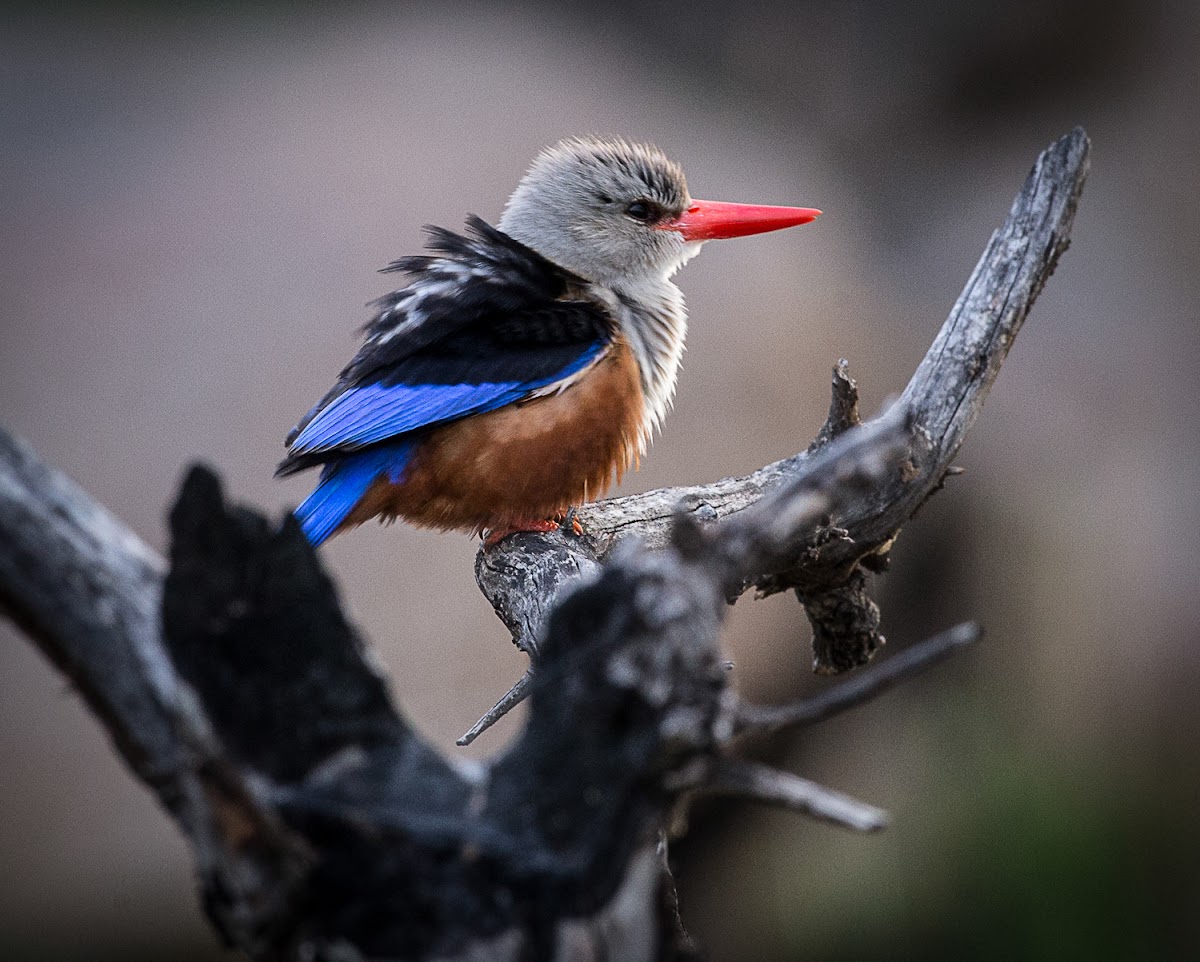 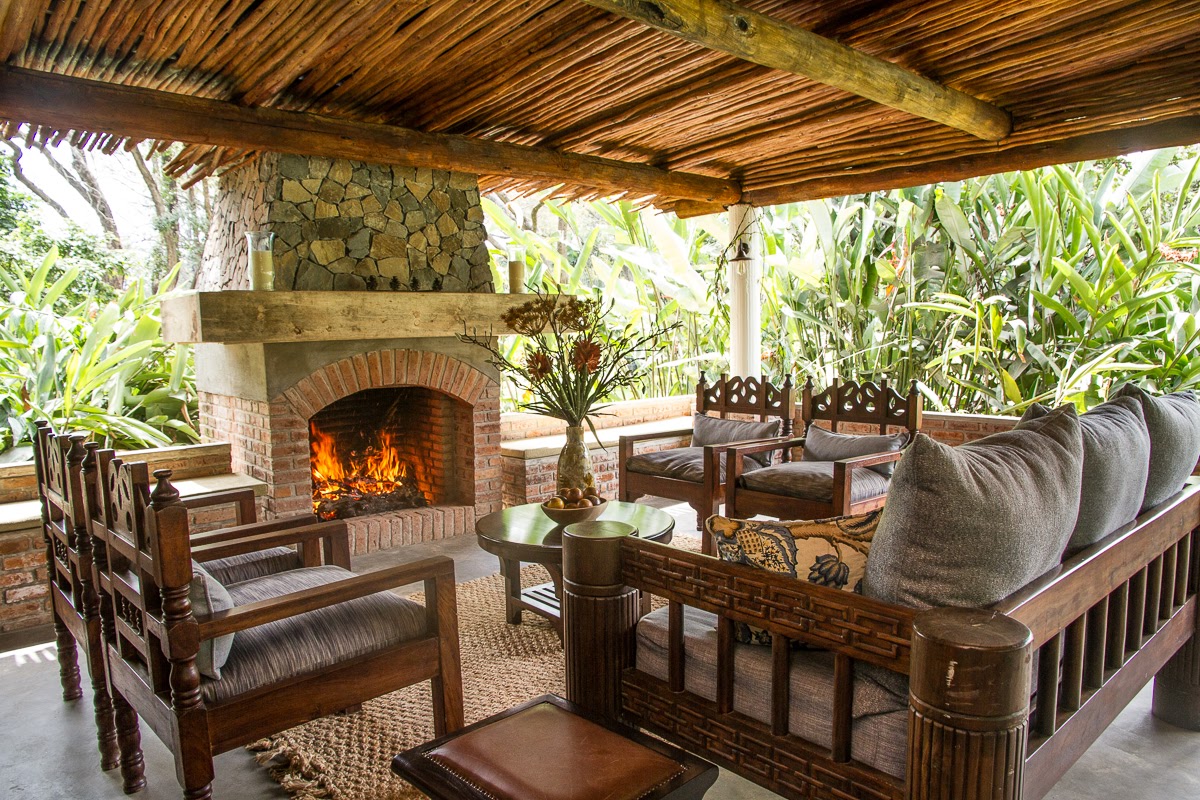 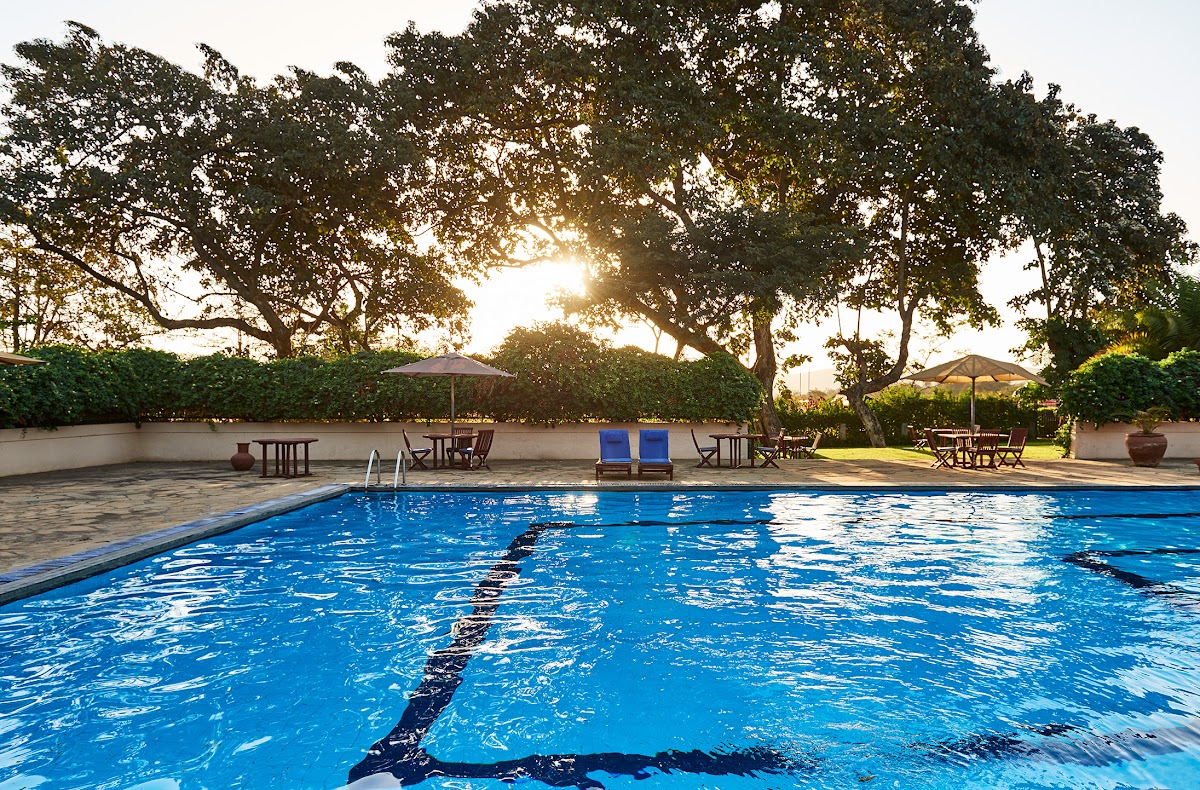 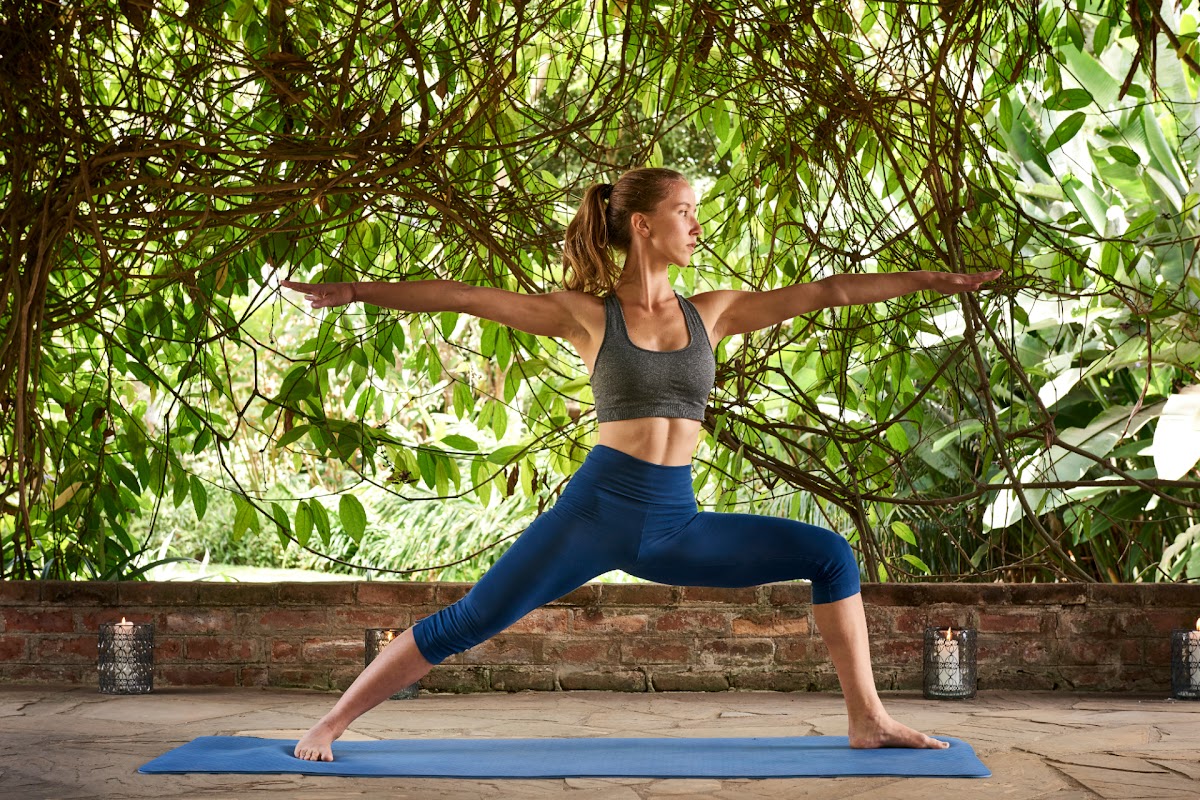 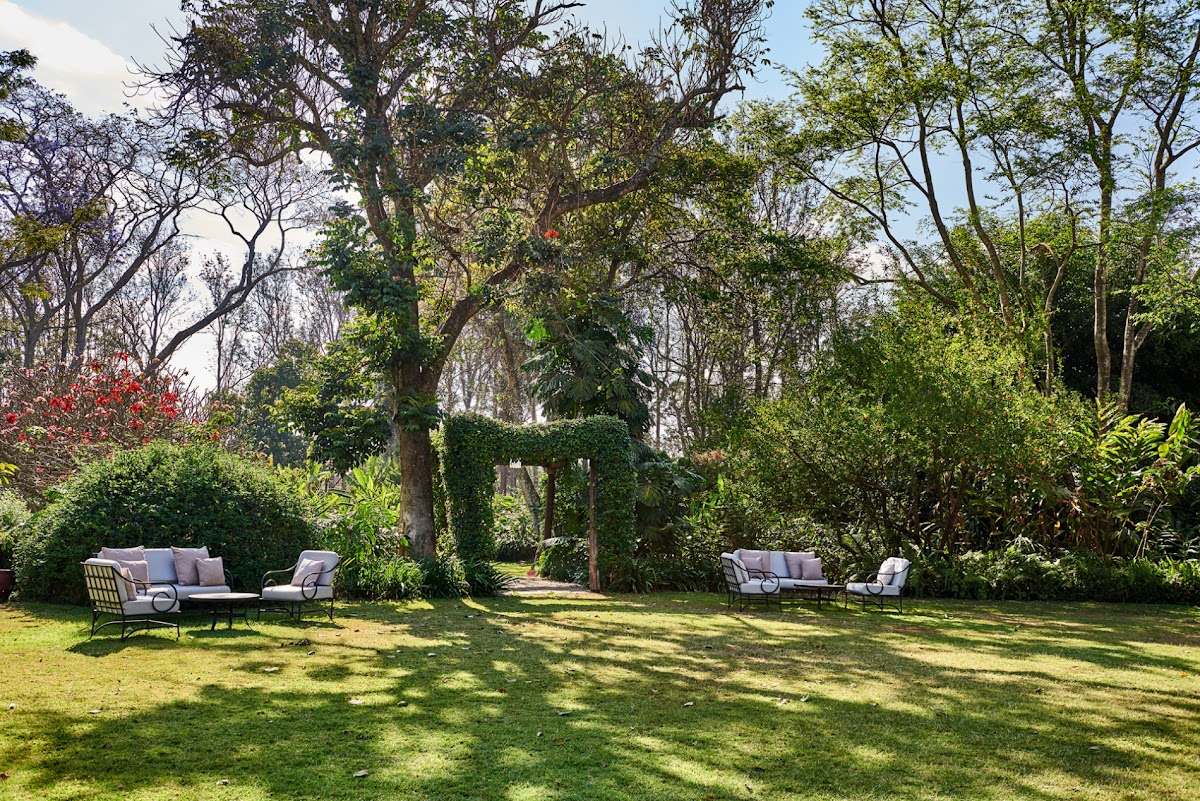 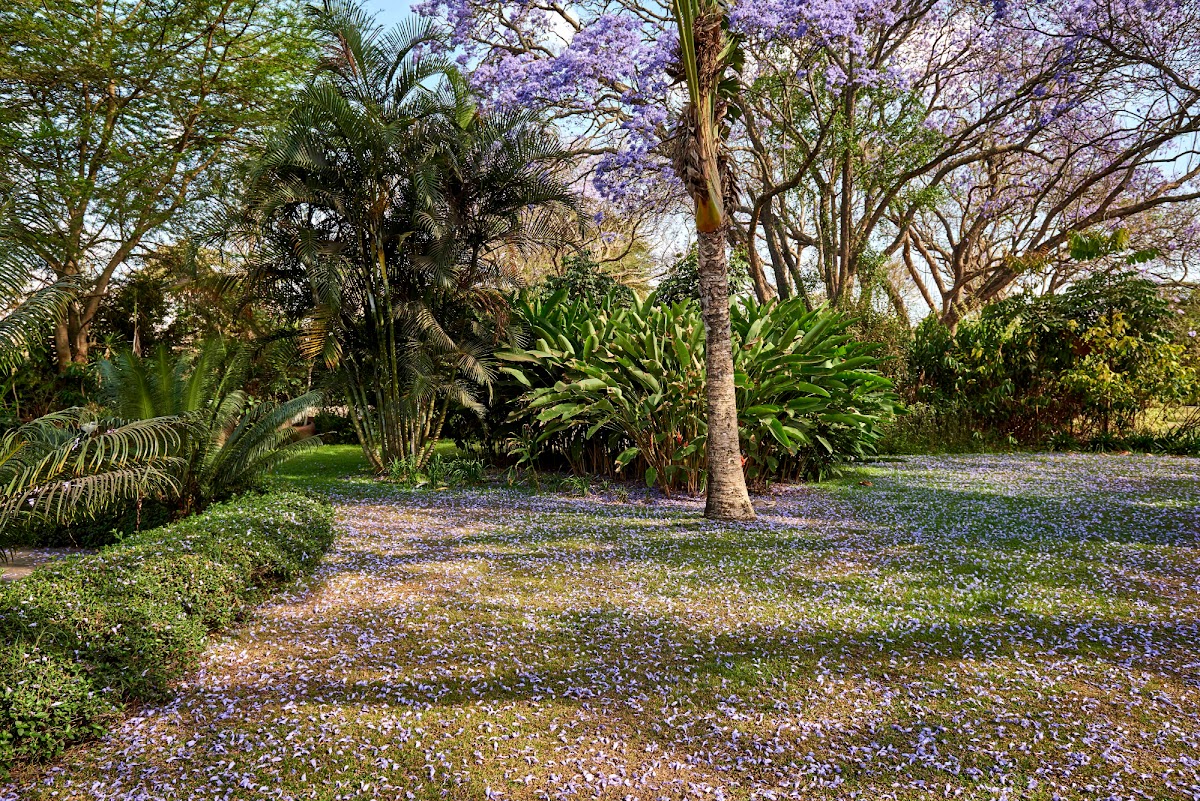 Legendary Lodge lies at the base of the cragged rocks of Mount Meru and just outside of exciting Arusha. The lodge itself is tucked away by the surrounding trees and greenery, nestled amongst the purple flowers that carpet the grounds. Immerse yourself in the beautiful tropical gardens and the surrounding coffee farm. Each morning, guests wake to the scent of the fresh coffee beans, and can tour the farm to learn about the coffee-making process. Legendary Lodge consists of 10 luxurious cottages and a two-bedroom family cottage, all of which are spaced apart to allow for maximum privacy, giving guests an exclusive experience. Enjoy candlelit dinners in this picturesque setting, surrounded by nature but just a short distance from the centre of a bustling and historical city.

Legendary Lodge consists of a collection of tranquil cottages, scattered across a coffee plantation on the outskirts of Arusha, a lively and vibrant city that lies at the base of the volcanic Mount Meru. Guests can reach the lodge by flying to Kilimanjaro International Airport, and then travelling to Legendary Lodge by car. The drive takes approximately 90 minutes. Alternatively, guests can transfer from Kilimanjaro International Airport to Arusha Airport and then take the 15-minute drive to the lodge.

The city of Arusha rests at the base of the volcanic Mount Meru. Arusha pulses with life, filled with museums, markets, shops, and restaurants. Home of Arusha National Park, guests in Arusha can take a day trip to see the incredible local wildlife such as turacos, trogons, waterbucks, giraffes, flamingos, buffalo, warthog, and monkeys.

Hike up the mountain trail and take a peaceful walk beneath a canopy of fig trees. Guests can also travel to the Ngorongoro Crater, an enormous depression left from a volcano that erupted and collapsed in on itself. Today, the caldera serves as a natural enclosure for various species of birds and other wildlife including wildebeest, black-spotted hyenas, zebras, elands, gazelles, elephants, lions, rhinos, antelopes, and more.

Set amongst the grasses, purple flowers and coffee trees, the 10 Garden Cottages are spaced generously apart from one another, giving guests a private stay in this tranquil and relaxing haven. Admire the sweeping views of the lush flora and towering Mount Meru from the comfort of your private verandah.

The cottages are decorated with a mix of African and Western styles to create a homely environment that fits the setting. The split level design of the cottages allows for a separate bedroom and living area. The bedrooms consist of a king-size bed fitted with mosquito nets. Each cottage features a spacious bathroom with both a relaxing tub and rain shower. The lounge area includes comfy seating, a fireplace for the cooler evenings, a satellite tv, and a refreshment area with tea and coffee making facilities, a minibar and a basket of fresh fruit.

Meru Cottage is ideal for families or couples travelling together. The cottage consists of two en-suite bedrooms, with king-size beds, which connect via a large living room area. Here, guests can relax while watching tv and reflecting on the fun activities of the day.

The fully stocked kitchen allows guests to create their own meals which can be enjoyed in the dining room, and meals from the lodge’s restaurant are also available on request. The family cottage is situated in a private garden, with a wrap-around verandah so that you can enjoy the beautiful flowers and trees that surround you.

Enjoy three delicious meals a day, all prepared with fresh ingredients by Legendary Lodge’s team of professional Tanzanian chefs. Breakfast is served from 6.30 am onwards and consists of a buffet of continental options, fresh fruit, cereal, yoghurts and freshly baked pastries. Your waiter will also be able to bring you a hot breakfast if you so wish.

Lunch and dinner both consist of three-course meals where guests can choose from a range of mouth-watering starters, main courses and delicious desserts. Meals at Legendary Lodge are inspired by dishes all over the world, and guests can enjoy comforting and familiar meals, or try out something new. Lunch can be enjoyed out in the gardens amongst the flowers, and dinner is usually served on the verandah after pre-dinner drinks by the fireplace. All dietary requirements can be catered for if advanced notice is given. Meals can also be enjoyed in the private comfort of your cottage if you prefer.

Arusha is a vibrant city that offers guests a range of experiences. Visit the many gift shops and the Maasai Markets Market and find gifts for loved ones back home. Legendary Lodge’s has its own boutique where guests can pick up a range of branded clothing and bags, as well as Africology products which are used at the lodge’s spa.

Guests can browse the crafted pieces at the Shanga workshop where delicate jewellery and artwork is made from recycled materials and disabled members of the community are empowered. Guests can also visit many other stalls and shops to purchase authentic safari clothing and marvel at beautiful Tanzanite and Tsavorite gemstones.

Alternatively, guests can learn more about Arusha’s heritage by visiting the Museum of Natural History, Tanzanite Museum and Arusha Cultural Heritage Centre. Educate yourself on the local history between retail therapy and enjoying delicious refreshments at the many cafes and restaurants of Arusha. Transfers outside a 15km radius are charged at an hourly/day rate.

Guests are invited to take a guided walk around Legendary Lodge’s Bulka Coffee Farm and learn about the process of growing coffee and harvesting the beans before drying and roasting them to create their unique coffee blends. The Tanzanian coffee is then exported far and wide so that it can be enjoyed by many. Participate in this educational activity and taste some of the delicious coffees that the farm produces.

Guests can take a day trip to Arusha National Park, a relatively small national park that spans 137 square kilometres, and is filled with a range of wildlife including giraffes, Cape buffalos, zebras, flamingos, turacos, and elephants.

The montane forest located by the park’s entrance is the only place on the Northern safari circuit where black and white colobus monkeys can be easily seen, and is also home to a number of blue monkeys. Within the park lies Ngurdoto Crater which is surrounded by herds of buffalo and warthogs who thrive in the marshy environment and forests. The small size of Arusha National Park means that guests can take their time to explore over the course of a single day.

Guests can also choose to visit the Ngorongoro Crater, the world’s largest inactive, intact and unfilled volcanic crater which was formed when a volcano collapsed in on itself over 2 million years ago. The crater is 2,000 feet deep and it is estimated that the original volcano would have been between 15 thousand and 19 thousand feet high. The Ngorongoro Conservation Area which surrounds the caldera is home to an abundance of birdlife and wildlife, including the Ngorongoro Lions who live within this natural enclosure.

Enjoy a relaxing afternoon with soothing spa treatments, facials and massages. Legendary Lodge uses a range of products from Africology in its in-house spa to provide luxury skincare. Guests can also choose to receive some spa treatments in the comfort and privacy of your cottage.

Guests can enjoy a relaxing afternoon at Kilimanjaro’s Golf and Wildlife Estate, a beautiful estate situated on 1,000 acres of African Bush positioned between Mount Meru and Kilimanjaro. Golfers can enjoy the spectacular views while completing either 9 or 18 holes on a championship course. The course features large greens, varied elevation and devious bunkers to offer an entertaining and fun experience.

Travel along the many trails of varying lengths that branch out through the gardens and plantation. Enjoy the natural beauty of the lush greenery, and explore the grounds. Guests can also hike up Mount Meru and enjoy the stunning elevated views of Arusha and the diverse landscape.

Experience a tour from the skies and view Arusha from a unique perspective. The scenic helicopter flights allow guests to gain a bird’s eye view of the pulsing city below. Witness the unique landscape of Arusha and its surrounding natural areas such as the Arusha National Park and Ngorongoro Crater as you fly above them.

The Friedkin Conservation Fund of Tanzania

‘By implementing social projects aimed at education, improving health and promoting sustainable livelihoods in areas neighbouring wildlife reserves, FCF aims to create a positive impact on the lives of rural communities, encouraging people to appreciate and protect their wildlife and its habitat. To ensure a holistic approach to the protection of Tanzania’s natural heritage, FCF also supports wildlife conservation programs and partners with scientists to conduct research to improve and inform outcomes.’

FCF works with nearby communities in order to provide creative solutions that can better the lives of local people, showing how wildlife conservation can benefit the community and encouraging local people to help in protecting wildlife and the environment. There are 3 areas in which FCF focuses on helping the communities: education, income generation and health.

FCF run a number of initiatives to support local school and improve access to education in remote areas of Tanzania where receiving an education can be a challenge. These initiatives include assisting with the construction of schools and classrooms, providing scholarships and housing teachers.

By generating projects that help provide an income for members of the local communities, FCF help villagers to become self-reliant and provide for their families. FCF assists small business owners by helping with micro-financing and offering consulting services.

FCF aid isolated communities by providing access to health services and supporting rural medical clinics. This is done by providing vital equipment and medicine, and offering the public an education in basic medical knowledge. Providing fresh, clean water is also crucial in supporting the health of local people. FCF provides safe water by drilling wells in areas that provide a clean and reliable water source for those living near wildlife areas.

The FCF was founded to preserve protected areas within Tanzania, working to stop illegal harvesting of natural resources such as charcoal and hardwood, and to prevent the poaching of local wildlife for their meats and ivory. To do this, FCF has employed local people who have received ranger training so that they can help to prevent illegal poaching.

‘FCF has taken on the responsibility of preserving over 3.2 million acres of protected wildlife areas that are crucial to the greater Serengeti ecosystem’s survival. Equally important as protecting and saving these last waste plains of wilderness is ensuring that communities living along these unfenced borders benefit from an active and committed wildlife conservation plan.

FCF work to monitor the wildlife populations in the areas in which they operate, using aerial surveys, conducting ground counts of species and monitoring the Serengeti’s rhino population. This research and monitoring allows FCF to access the best ways in which they can preserve wildlife and promote the long-term sustainability of the animals and their habitats. FCF also work with TAWIRI who conduct environmental research on the behalf of the Tanzanian Government.

Children of all ages are welcome at Legendary Lodge 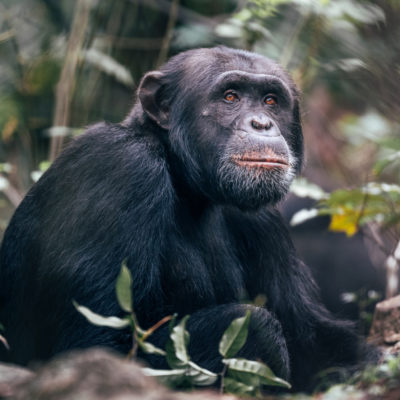