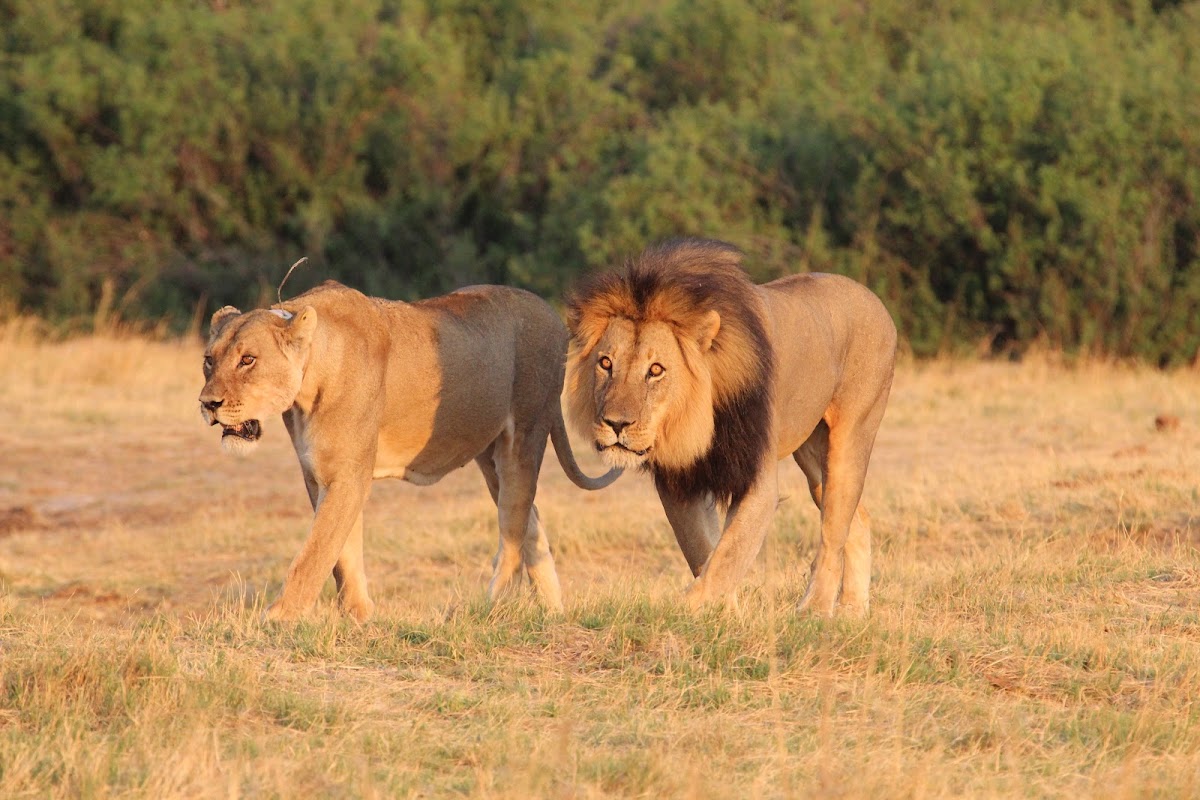 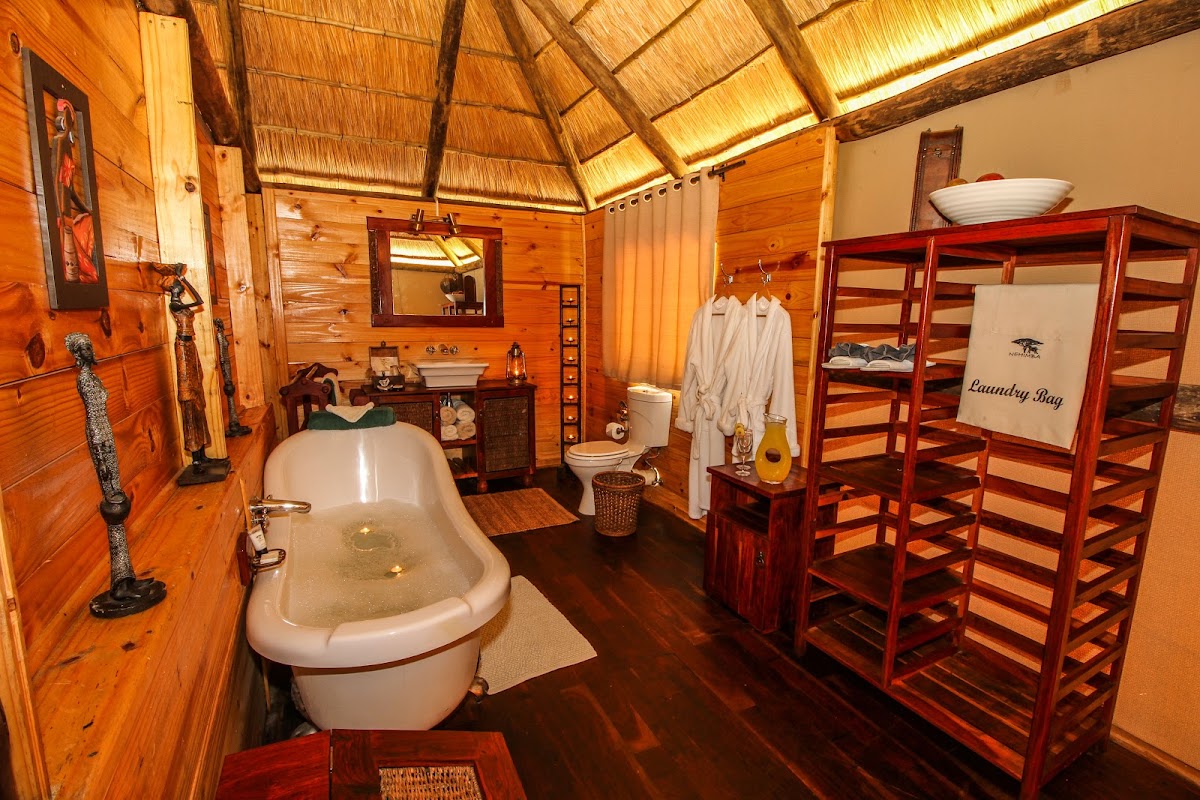 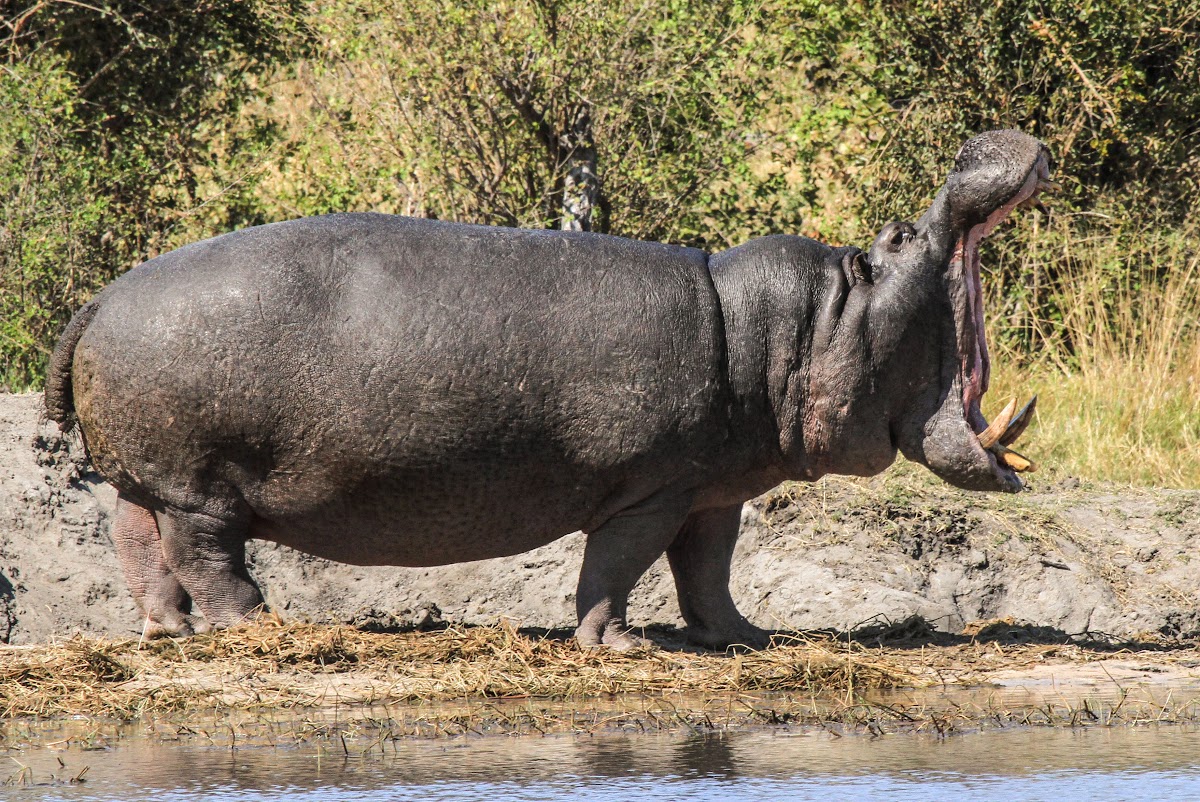 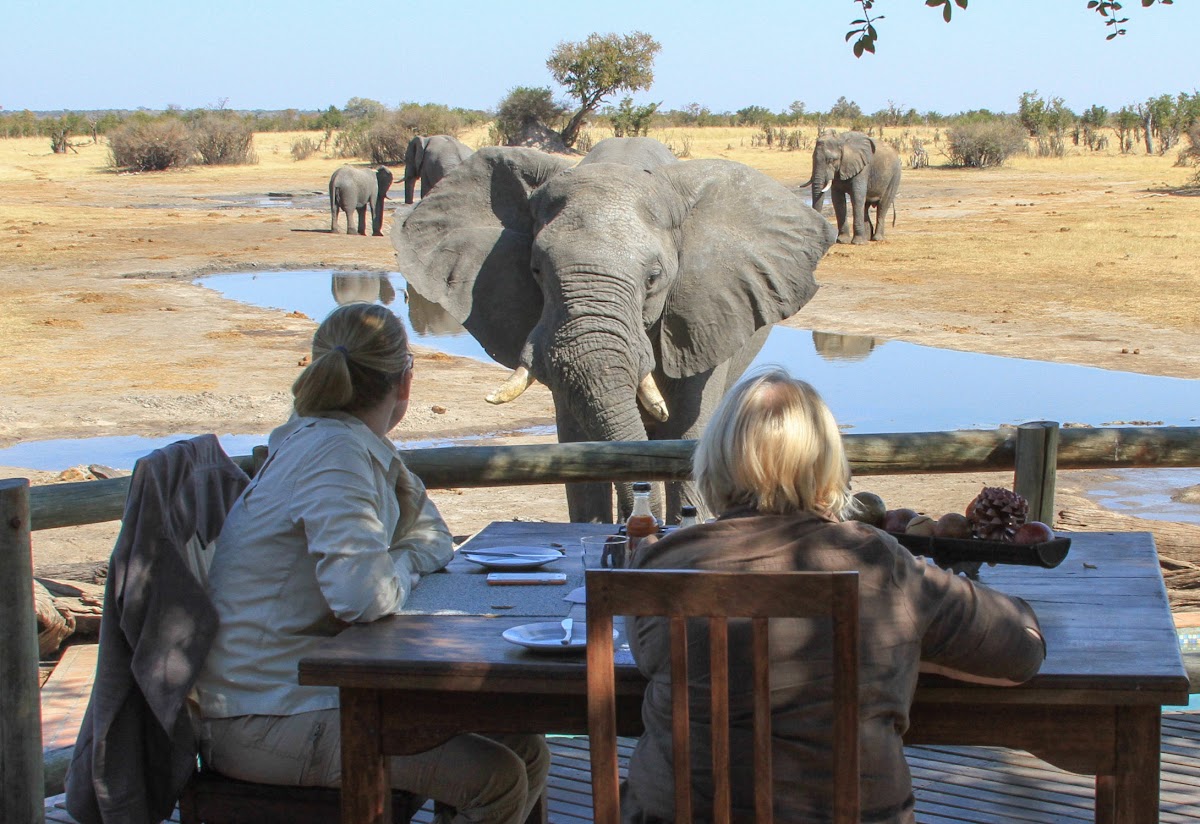 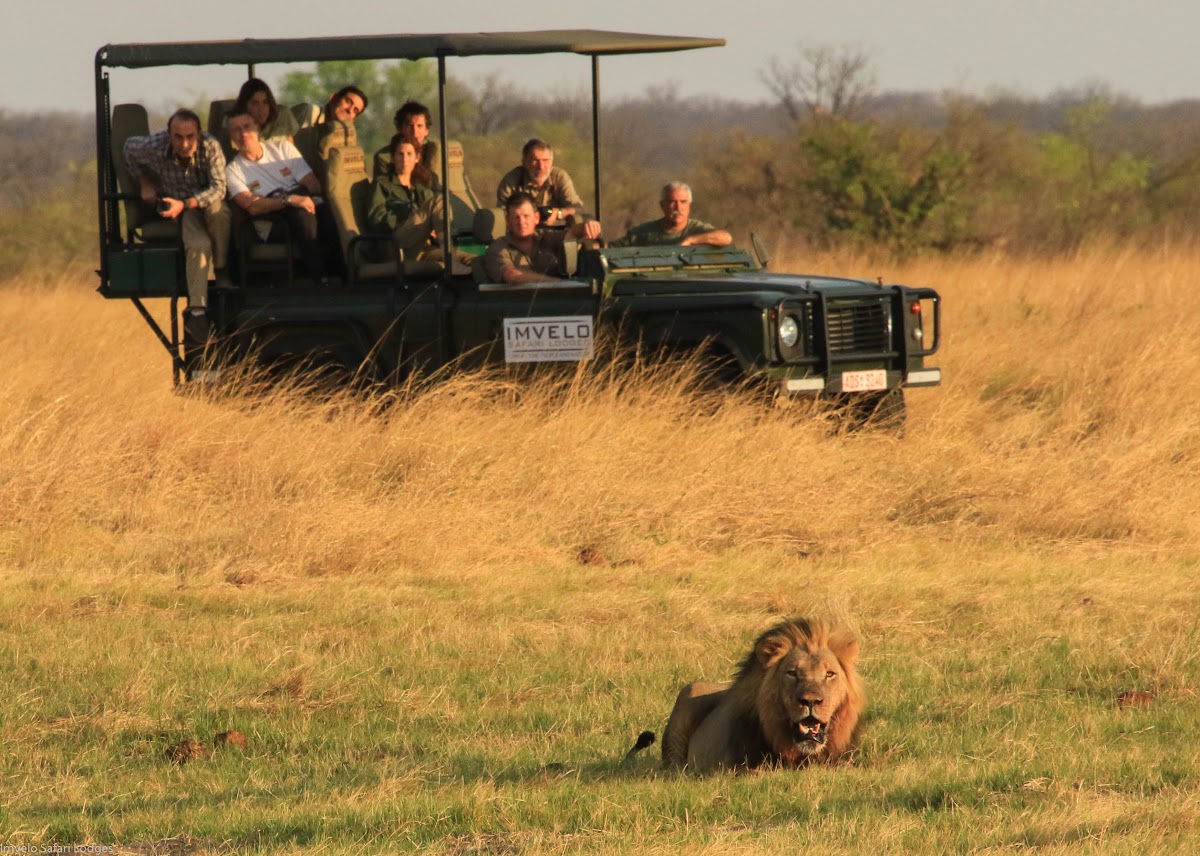 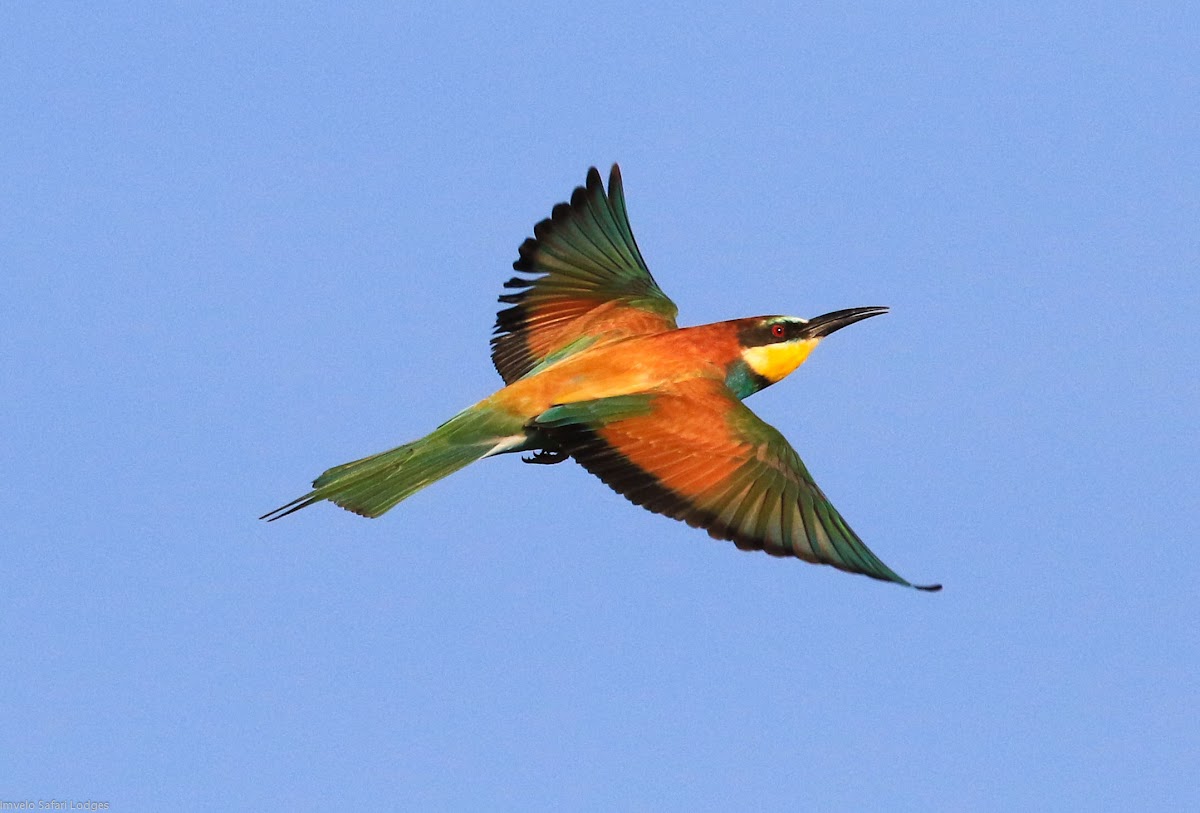 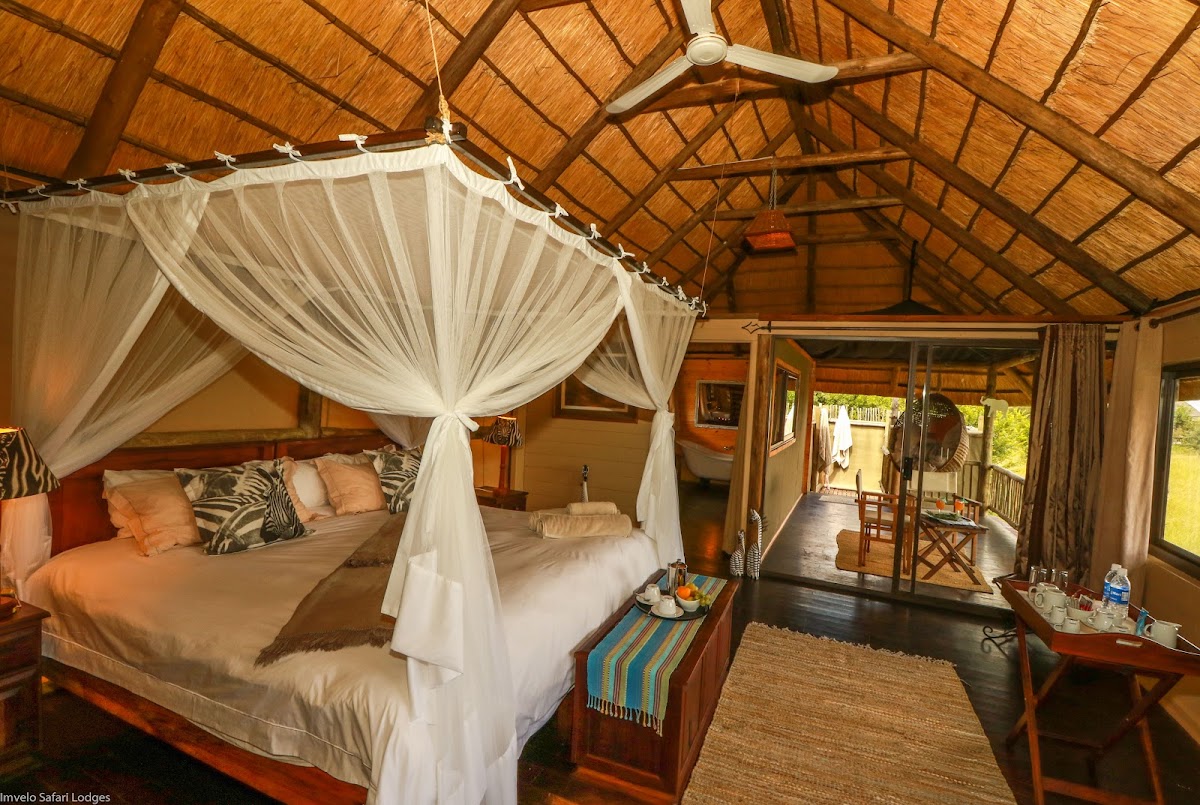 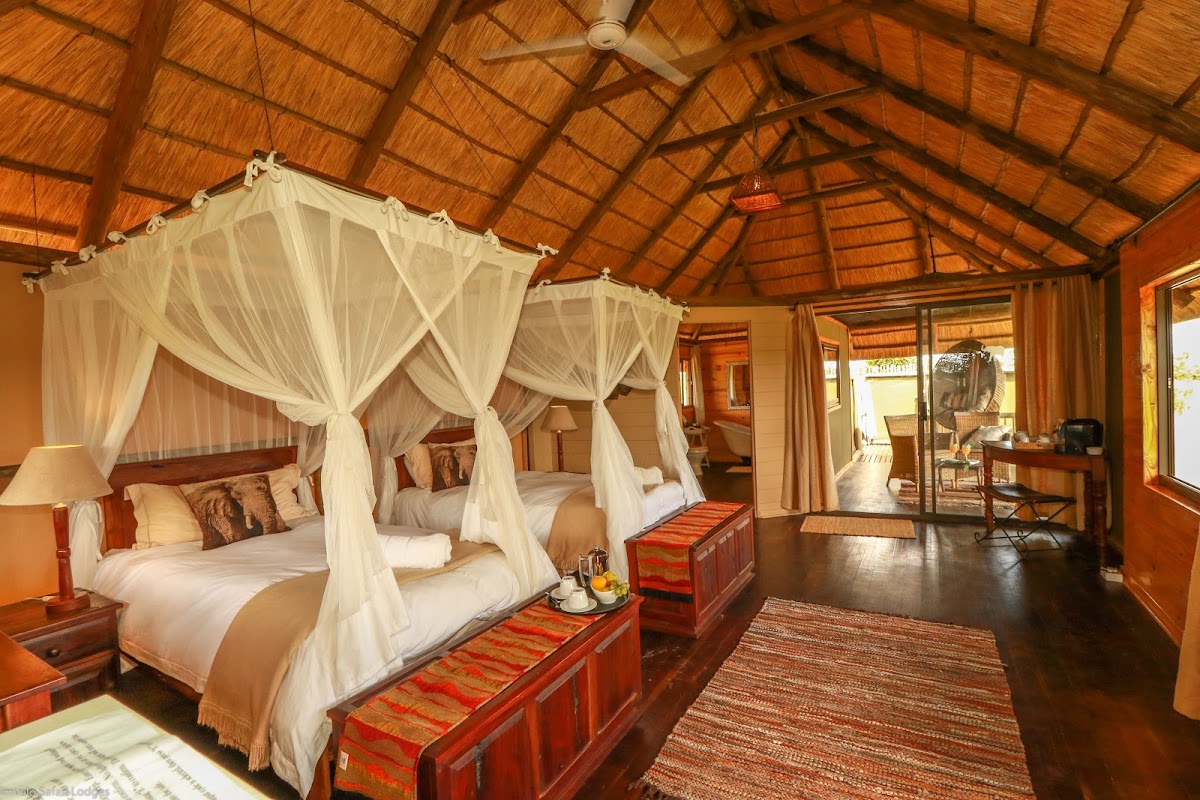 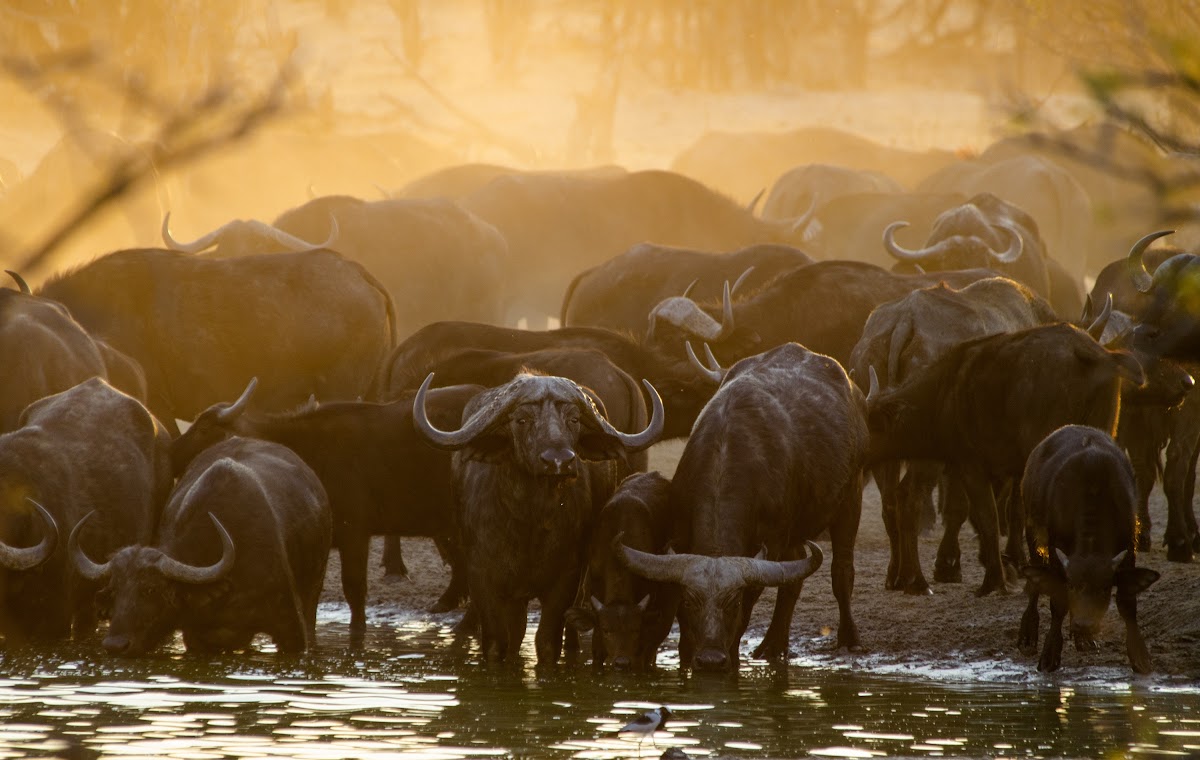 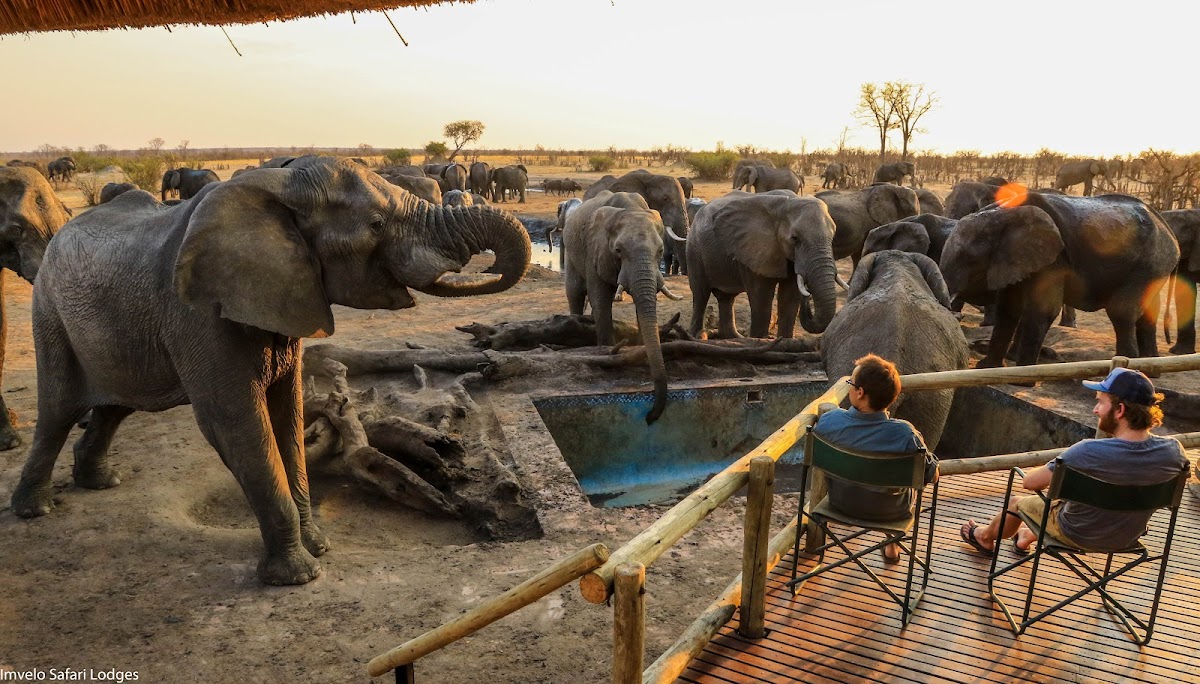 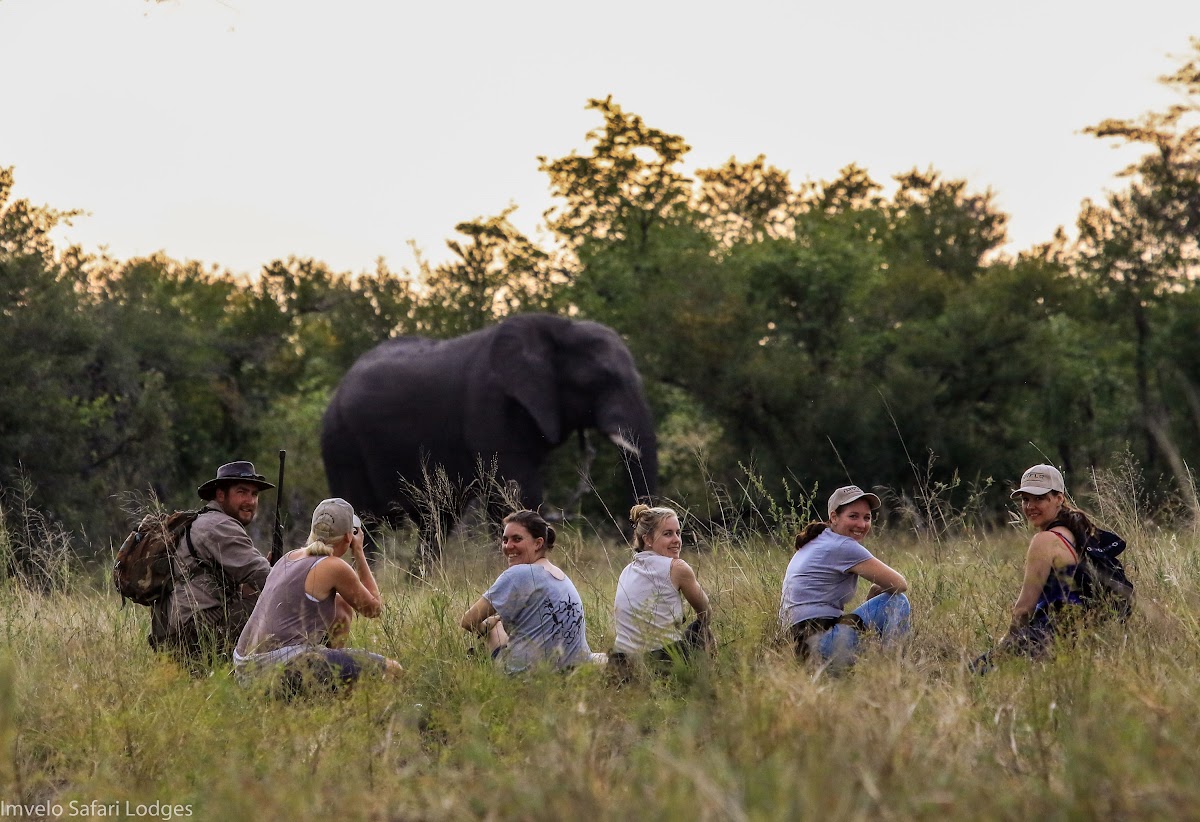 In the wilds of the Hwange National Park sits Nehimba Safari Lodge. Surrounded by rolling grasslands and overlooking a watering hole, this lodge offers guests an authentic and traditional safari experience. The lodge is small, with only 9 safari suites, meaning it is private and exclusive, and will give guests a unique and once-in-a-lifetime experience of the park. The suites are spacious and comfortable, with cosy beds and private deckings. Meals are served in the main area which boasts a stunning view of the watering hole, so no wandering or thirsty animals are missed while guests tuck into delicious food. Game drives and game walks are offered here, allowing guests to get up close and personal with the astounding biodiversity of this breathtaking national park.

Founded in 1928, Hwange National Park is the largest national park in Zimbabwe, covering a breathtaking 14,600 kilometres². The land was previously used for agriculture but when it no longer became suitable the park was founded, and the process of re-wilding began. Due to a lack of naturally occurring water, artificial watering holes were created inside the park. Today, the park is a haven for wildlife, with a diverse number of species roaming around the park. Home to around 50,000 elephants, the park is also home to giraffes, buffalos, wildebeest, zebras, hyenas, antelopes, hippos, and lions. Also over 420 recorded species of bird from bronze-winged coursers to Egyptian vultures call the rolling grasslands, teak forests and mopane woodlands home.

Guests can access Nehimba Safari Lodge by flying into Victoria Falls Airport and then transferring by a charter flight to Hwange Main Camp Airport or Giraffe Springs Airstrip, both of which are followed by a drive to the lodge.

The dry season in Hwange National Park is from April until October. This time of year is dominated by blue skies and few, if any at all, rain showers. Temperatures slowly get warmer throughout this season with May, June, July and August being one of the best times of the year to see wildlife. These months have warm temperatures, around 26°C during the day, but the mornings and evenings can be cold – reaching lows of 7°C – so a warm jumper or jacket is advised for these times of the day. September and October are the warmest months, with temperatures increasing to the low 30°Cs, and occasionally hitting the high 30°Cs in October, which is the hottest month of the year.

The wet season begins in November, with it bringing the first refreshing rains of the year. The weather is unpredictable, however it is unlikely to rain everyday instead occurring in short but brief torrential downpours. The park is still pleasant during this time of year as temperatures are still warm, and this is the best time for birders to visit, as the skies are filled with song from migratory birds. The landscape is colourful and luscious, filled with new life, both plant and animal. January to March are the months with the heaviest rains, so conditions may become inaccessible.

The rooms at Nehimba Safari Lodge are spacious and comfortable. All with exposed thatch ceilings and exposed beams, the rooms are full of character and dimension, and feel authentic and traditional. This authentic feel is further accentuated by patterned fabrics and rugs which are dotted throughout the suite. A large king size bed, or twin beds, sit in the centre of the room, romantically swathed in mosquito netting and with a ceiling fan above to help keep guests cool.

All rooms come with ensuite bathrooms and an expansive decking area including a unique outdoor shower, and which overlook the watering hole, giving guests the perfect place to relax in the mornings or the evenings – with a fresh cup of coffee from the tea and coffee maker – keeping a lookout for any animals gathering round for a drink. These safari suites come in a range of configurations; twin or double rooms are available, and a family room which can sleep up to four is also available.

The main dining area at Nehimba Safari Lodge includes a large communal dining table where delicious and freshly prepared food is served, made by skilled chefs. If guests wish, and the weather allows for it, meals can be enjoyed on the decking overlooking the pool and watering hole, in the fresh air of Zimbabwe. A bar serves cooling and refreshing drinks, which guests can enjoy with their food – raising a toast to their stunning surroundings.

For a traditional safari experience guests can enjoy a game drive in a comfortable 4×4 safari vehicle. Drive through the Hwange National Park and get up close and personal with elephants, giraffes, zebras and lions all in their natural habitat. Morning, afternoon and all day drives can be organised, with all day drives including a quick break for some snacks and refreshments in the heart of the bush. Nighttime drives are also available and give guests a rare glimpse at some of the more elusive nocturnal animals of the national park.

With a knowledgeable and friendly guide traverse the national park on foot. There is no better way to immerse yourself in nature than to explore it on your own two feet. Marvel at the smaller ecosystems of the bush, such as animal tracks and insect life.

Close by to Nehimba Safari Lodge is a purpose built viewing platform which guests can walk to at any time, with the sunset being especially beautiful from there. A drive to the Mandavu Dam can be organised for guests who wish to see this large body of  water and the birdlife and hippos which come to wade in the shallows. A picnic can be organised here too, so guests can spend some time relaxing and enjoying the view. A visit to the Nehimba Seeps can also be arranged for guests.

This is a designated conservation area, where there is one of the only naturally occurring water sources in the Hwange National Park. Historically, the water was used by San bushmen, but today this is a great place to observe herds of elephants having a drink and digging for minerals.

A large sparkling plunge pool sits outside the main area of the camp. Guests can escape from the afternoon heat here by taking a refreshing dip. The pool overlooks the watering hole also, meaning guests won’t miss any exciting animal activity.

Imvelo Safari Lodges are all part of a wider movement to bring ecotourism to the areas in which they operate. They use parts of the profits made by tourism to “directly benefit and empower local communities and promote environmental sustainability.” A major policy they implement at Imvelo is the placement of their parks, to start as they mean to go on they build their lodges on the edge of national parks so their impact on the environment is smaller and so they are more closely connected with the local communities.

Imvelo Safari Lodge have their own initiative called the CAMPFIRE program. This helps to connect and build a bridge between local communities in Zimbabwe and wildlife conservation. CAMPFIRE stands for ‘Communal Areas Management Program for Indigenous Resources’ and the philosophy which underlines the project is that “the people living within the natural resources are best placed to manage them and when doing so in a positive way, should reap the benefits directly.”

To help provide the local communities with clean and reliable drinking water, Imvelo helps to maintain and drill boreholes. Safe and clean drinking water is a human right, and Imvelo helps to protect this when water becomes scarce, during the dry seasons. In the past 8 years over 80 new wells and boreholes in the village and district were established by Imvelo, costing more than US$1.5 million. These boreholes help clean water to reach 1500 school children and 2280 homes, in total reaching 13,680 people and livestock.

Living in rural areas means access to affordable healthcare is limited. In 2011, Imvelo launched its first mobile dentist safari with 24 volunteer dentists which drove around and offered free dental care to local communities. From some of the patients, the dental care and procedures they received have made positive impacts on their health and may have even bee life-saving. All for free, in the past seven years over 20,000 dental procedures have been carried out on over 20,000 patients.

More recently, in 2015, Imvelo were able to add an eye clinic to their dental safari which treated 221 patients in its first year. Glasses, received as donations were provided for those who needed them. In 2018, the eye care clinic was able to treat over 2000 patients and provide sunglasses to help protect villagers’ eyes from the sun.

Imvelo gives support to 14 schools in the area in which they operate. The Ziga and Ngamo Primary Schools, which are both located on the edge of Hwange National Park, have become the best primary schools in the area thanks to money raised by both donated funds and safari camp lease fees. This money went to providing clean and safe classrooms with furniture, electricity and water. Teachers have also been provided with comfortable accommodation as well as training support and a salary.

To help increase the number of children proceeding to secondary school on completing their primary education, Imvelo built the Ngamo Secondary School which is now open with hundreds of students who can continue to learn in a safe and maintained environment. Since 2014, more than 9 double classroom blocks have been constructed, which accommodates 720 students, they have also repaired and maintained existing classrooms and built 13 teachers’ houses. Imvelo also “purchased and supplied classroom furniture for 612 students and their teachers, and provided 95 students with bursaries for school fees, uniforms and stationery.”

Pack for a Purpose

Nehimba Safari Lodge, and Imvelo more widely, supports local schools through Pack for a Purpose, which is an initiative that encourages guests to utilise any spare space in their suitcase by packing donations and supplies for local projects. School supplies, such as pens, notebooks and book bags will go directly to Ngamo Primary School, where they will benefit both teachers and students.

Imvelo Safari Lodges has been very supportive of the ‘Scorpions’ Anti-Poaching Unit which operates in the south of Hwange National Park by providing training, supplies, bedding and wages to the rangers who help protect the wildlife from illegal poachers. The Scorpions work to remove wire snares and aid both police and national parks in catching and arresting poachers who hunt protected animals for ivory and hides.

In 2016, the Scorpions were responsible for the capture of an entire team of elephant poachers. Imvelo and their donors have also established a new team of rangers called the Cobras, which supports park workers and the Makona ranger station on the southern border of Hwange. Many of Imvleo’s safari lodges are built in strategic places in Hwange National Park, where their presence will act to further deter poachers and act as a base for park rangers and anti-poaching patrols.

Imvelo clears and manages over 280 kilometres of fire guards each year in order to protect wildlife habitats from wildfires. Imvelo safeguards thousands of square kilometres of wildlife habitat through this initiative, as well as the animals that live within this area. The project is funded through Imvelo’s revenue and donor funds raised on both local and international fundraising events.

The wildlife within Hwange National Park is reliant on artificial waterholes, which if they were to run dry would result in the deaths of thousands of animals. Imvelo is working to make this programme more eco-friendly by using solar-powered water pumps in the more recent boreholes in order to reduce the consumption of diesel and fuel needed to maintain the waterholes. The solar pumps also provide a power source for rangers to make use of for radio communications with HQ and charging batteries. Imvelo is continuing to replace diesel pumps with solar-powered ones to reduce carbon emissions. 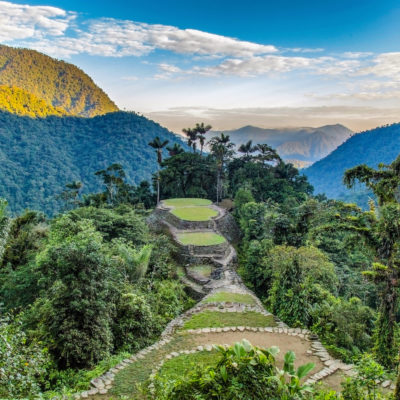 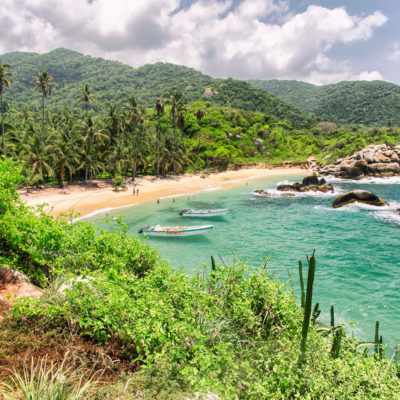 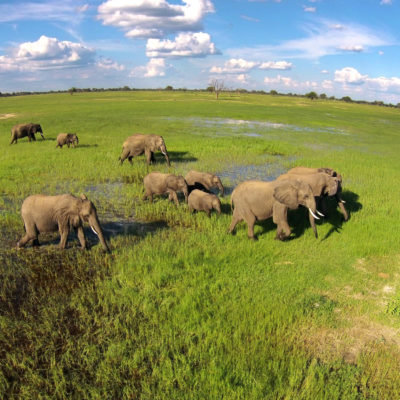